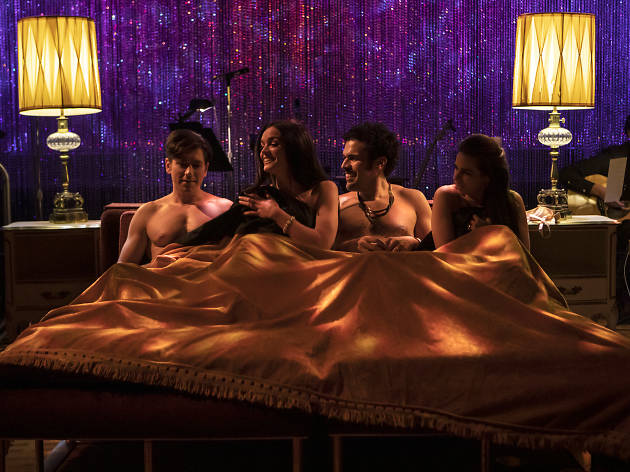 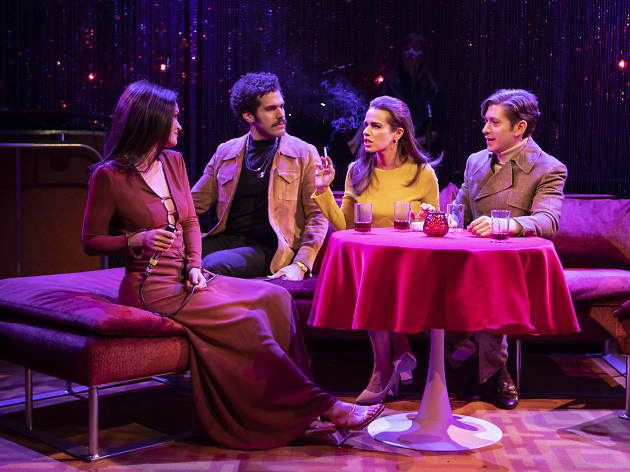 The new musical adaptation of Paul Mazursky’s 1969 movie Bob & Carol & Ted & Alice hews closely to the film’s satirical exploration of how the free-love movement unmoors two married couples. After attending an encounter group, the desperate-to-be-hip Bob (a wonderfully smug Joél Pérez) and his submissive wife, Alice (Jennifer Damiano), start proselytizing polyamory to their pent-up friends Ted (Michael Zegen) and Alice (Ana Nogueira, hilariously high-strung). Sounds fun, right? But like an evening of awkward sex, this stilted show isn’t nearly as stimulating as it promises to be.

It’s understandable that book writer Jonathan Marc Sherman and songwriter Duncan Sheik (with a lyrical assist from Amanda Green) were attracted to Mazursky’s story. In the age of Tinder hookups and FOMO, the rules of romantic engagement feel more fraught than ever. Yet the musical, produced by the New Group, mostly plays as a parody of a period piece, and a poorly structured one at that. In the extraneous-seeming songs, Sheik’s zippy Burt Bacharach–style melodies are weighed down with lyrics that function as banal internal character monologues or as narrational scene-setting sung by Suzanne Vega, who leads the onstage band. Scenes that are dryly humorous in the movie fall flat under Scott Elliott’s tonally murky direction; there are cheap moments of audience interaction, in which theatergoers are tasked with fleshing out the foursome’s world.

Only in the show’s final 20 minutes do you get a sense of what might have been. Decked out in Jeff Mahshie’s fabulous mod costumes, the two couples attempt to shed more than just their inhibitions, yielding a collective anticlimax that is funny, messy and uncomfortable. Their simpers are the closest thing this show gets to a bang.