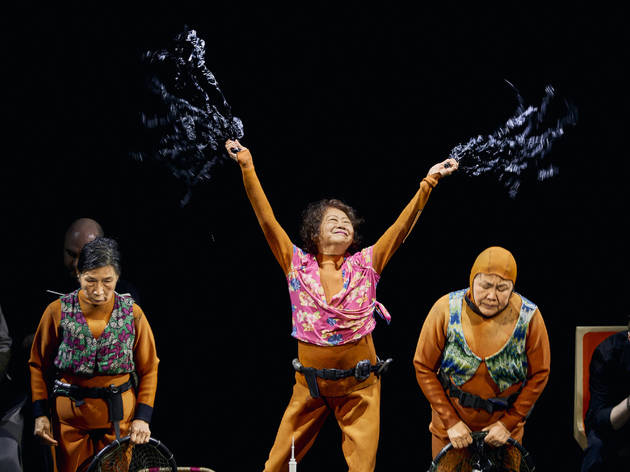 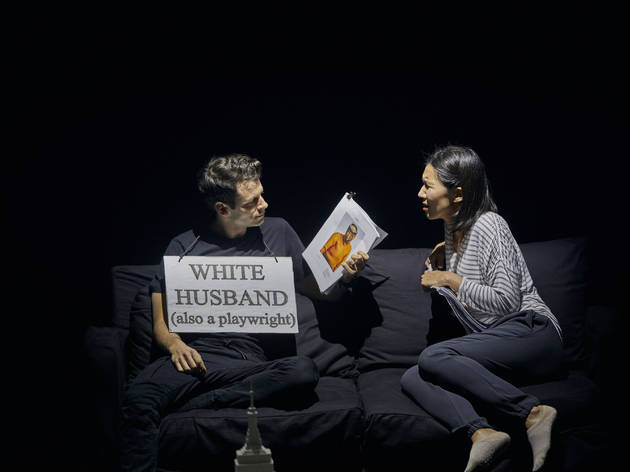 The ostensible subject of Endlings, Celine Song’s deconstructed new play, are elderly women native to a small island off the South Korean coast, where for centuries such women—known as haenyeo—have plunged into the ocean to gather seafood. But these divers turn out to be red herrings for the bigger fish that Song is out to fry: herself, her creative process, and the systems supporting this very play (including the theater in which it’s being presented). Although the result is less than cohesive, Endlings is a bold and revealing act of autofiction by a playwright actively wrestling with her identity as an artist.

We meet three haenyeo as they climb into snug orange wetsuits (the costumes are by Linda Cho) for a long day of foraging. Weathered but spry, each is introduced by the voice of a droll, unseen narrator. One (Hustlers’s Wai Ching Ho) is in her 90s and obsessed with peak TV; another (Emily Kuroda) is in her 80s and immune to common niceties, and the third (Jo Yang) is in her sprightly 70s and possessed of a playful vanity. A surrogate for Song, played Jiehae Park, soon interrupts the action and wrests the play into the here and now. If these divers are the "endlings" of the play’s title, or the last of their kind, the playwright is in some ways the first of hers.

Unmasked as our narrator, the playwright identifies herself as an immigrant artist trying to gain footing on another coastal island half a world away from the one depicted on stage. As Song’s meta conceit grows more expansive, reconciling the far-flung action of the haenyeo (where the play excels) with its Russian-doll framing in present-day Manhattan proves a challenge. Sammi Cannold’s direction includes reveals that are both witty and beautiful—the set, with its peek-a-boo pool, is by Jason Sherwood—but it can feel too literal for the play’s slippery conceptual turns.

Song is clearly grappling toward some measure of reconciliation: between her Korean roots and the artistic institutions that would seek to profit from them, between her family’s sacrifice and the value of her creative output. There’s something disarming and even fascinating about seeming to witness that struggle in real time. But the play comes perilously close to sinking under the weight of its self-contained apparatus.