Fruma-Sarah (Waiting in the Wings)

In the pantheon of comic actors, Jackie Hoffman is the goddess of grievance. She may not sit at the center, but she plays a valuable role on the sidelines: Who else will complain when the lightning is too bright, the hearth is too hot, the orgy doesn’t have enough grapes? Her expert sourness has made a strong impression in small roles—in Broadway’s Hairspray and Xanadu, for example, or TV’s Feud: Bette and Joan (for which she lost an Emmy)—but fans who want the full Jackie experience have mostly had to content themselves with her hilarious solo cabaret shows, which bear such long-Jewish-suffering titles as The Kvetching Continues.

The new play Fruma-Sarah offers a rare chance to see Hoffman center stage—even if, ironically enough, she’s stuck in the wings the whole time. In E. Dale Smith's 75-minute comedy, Hoffman stars as a cantankerous real-estate agent and community-theater actress named Ariana Russo, who is playing a tiny role in her New Jersey company’s latest production of Fiddler on the Roof: the vindictive ghost Fruma-Sarah, a shrieking and pearl-clutching harridan who flies onstage in the musical’s nightmare sequence. But her big entrance and rapid exit come an hour into Fiddler’s first act, so Ariana has plenty of time to loiter offstage and loudly bend the ear of the strapping Margo (Kelly Kinsella), the patient substitute crew member in charge of her flying apparatus. (Extra meta points: Hoffman herself played Yente in Fiddler’s most recent New York revival.)

Spun out from an idea by its director, Braden M. Burns, Fruma-Sarah employs a clever structuring device. We hear snatches of Fiddler as the performance moves forward outside our field of vision, and each of its songs cues Ariana into expounding about a different aspect of her life, which has taken a series of disappointing turns. She’s talented, but she keeps losing roles to women who are nicer and easier to work with. She struggles with money. Her daughter doesn’t talk to her; her husband has left her for another man. It doesn’t help that she keeps nipping bourbon from a flask hidden in her gauzy chartreuse eruption of a dress.

Melancholy though Ariana may get, however, Hoffman infuses this isolated and demanding woman not only with a need for attention but with some of Hoffman’s own real zest for performing, as well as comic inflections that evoke the lineage of Yiddish theater. (Ariana is not Jewish, but as she says, “Italians and Jews get cast to play each other all the time, and nobody knows the difference.”) Fruma-Sarah doesn’t go deep; its comedy is familiar, its brief flirtation with tragedy is unconvincing, and Margo has little to do beyond serve as a sounding board. But if the part of Ariana is not always made of first-rate material, it suits Hoffman well and she wears it like skin. After too long a drought, here is a chance to see a real live character actor in an intimate space, doing what she does best. Who could complain? 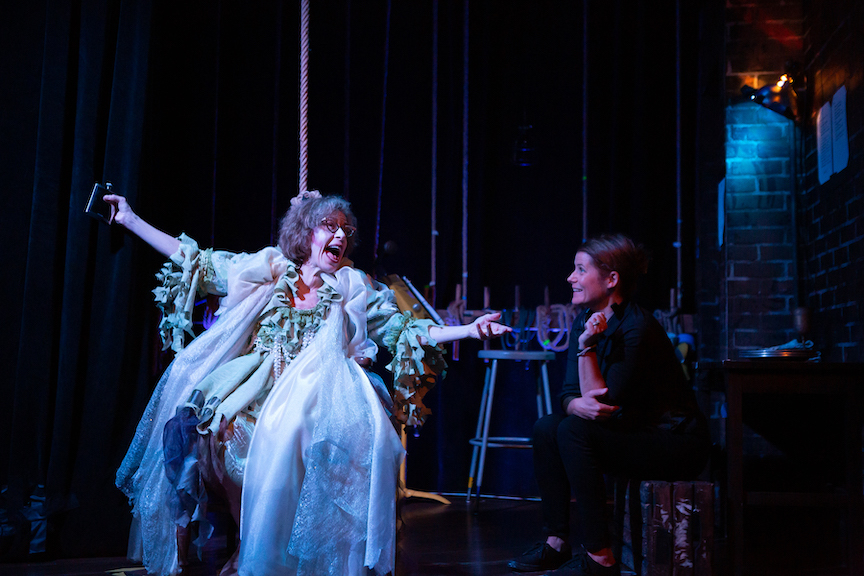