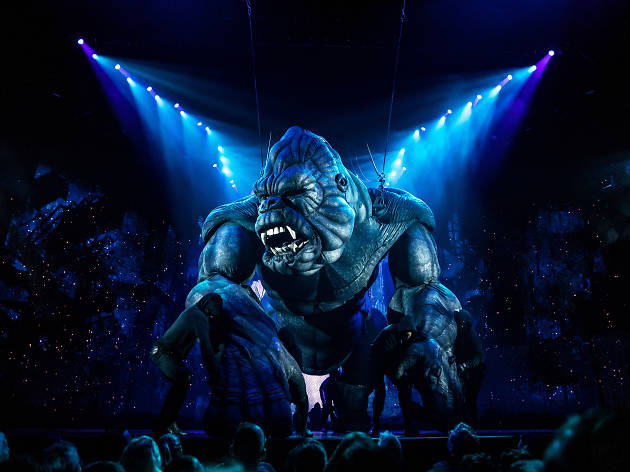 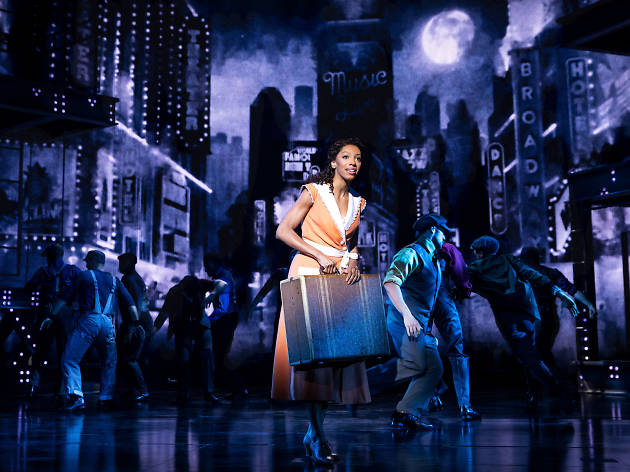 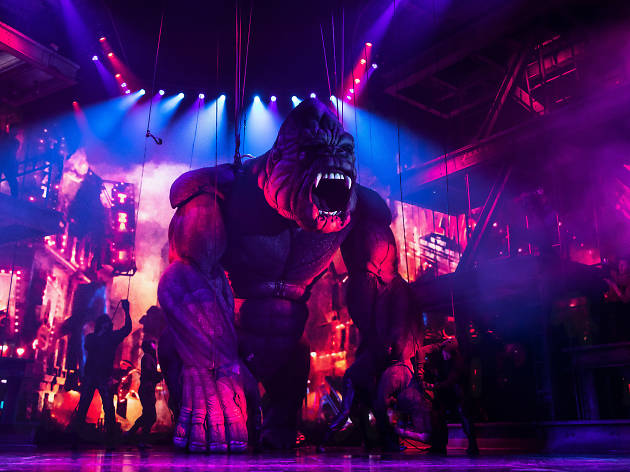 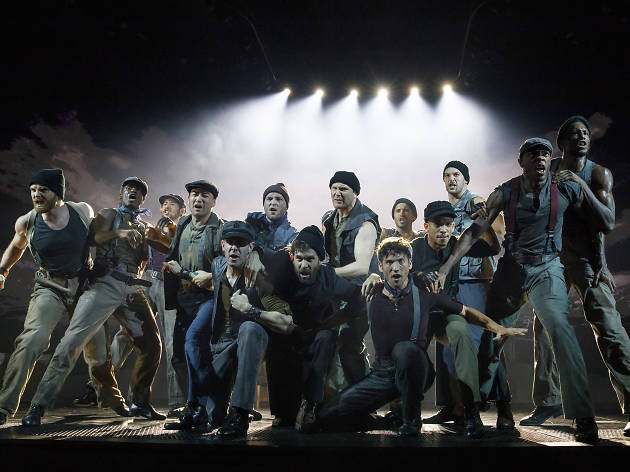 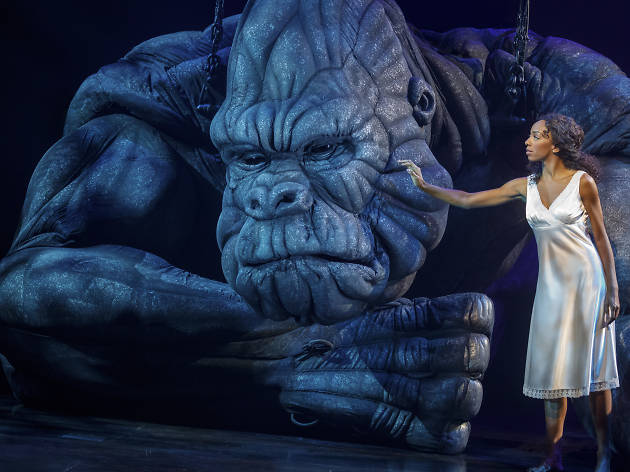 The first thing you see of Kong is his teeth: sharp, white, gleaming in the dark, the mouth of an enormous Cheshire ape. He has been summoned by an ambitious young actress, Ann Darrow (Christiani Pitts), who senses that some great creature lurks on the ominously named Skull Island: “It seems empty, but it feels alive,” she says. And sure enough, no sooner has Ann tangled herself in vines and let out a scream than the fearsome monster emerges from the jungle to find her, grab her and spirit her off to his lonely mountain lair—Christine Daaé to his megafauna Phantom—as the audience gapes, claps and whoops with glee.

This is the first moment in the misbegotten Broadway musical King Kong that really connects, and it is not the last. The titular creation, designed by Sonny Tilders, is truly impressive: a 20-foot, 2,000-pound animatronic marvel that would be the pride of any amusement-park thrill ride. Manipulated by more than a dozen ninja-like puppeteers, this Kong has the jacked, hairless body and gnarled, wrinkled face of a steroidal leather granddaddy. But his eyes and brows are preternaturally expressive, and when he rears up on his stubby legs and lets out a gutteral roar—Jon Hoche provides the voice, amplified and shaped by Peter Hylenski’s sound design—the theater trembles. (When he’s merely suspended by wires, the spell is broken; he looks like a Macy’s balloon.)

Yet this very special effect is trapped in a show that is mostly pretty awful. It pads its spectacular attraction in a skeletal, hackneyed story: In Jack Thorne’s threadbare book, only four characters even have names. Eddie Perfect’s songs combine B-level modern radio pop with lyrics so banal and declarative that they had might as well be stage directions. (“Here comes Ann completely out of place,” sings farmgirl Ann on her arrival in NYC, single suitcase in hand, like the Star to Be in Annie. “Everything she owns in just one case.” Yes! We know!) Director-choreographer Drew McOnie keeps the ensemble in a constant state of agitated movement that is busy but nothing else: It seems alive, but it feels empty.

The truly frustrating thing about King Kong is the waste of it all. Why did this story, whose central figure necessarily cannot sing, need to be a musical at all, much less one that suggests a late-run Simpsons parody? Have the success of War Horse and Thorne’s own Harry Potter and the Cursed Child—and the bellyflops of Spider-Man: Turn Off the Dark and Cirque du Soleil’s Paramour—taught us nothing? King Kong looks down on its huckster villain, film director Carl (Eric William Morris, overplaying an unplayable role), for taking an awesome creature and surrounding it with mediocrity for a gawking New York audience—but that’s exactly what this production does itself. In the sad eyes of the second act’s chained and stooped Kong, you see flickers of a show that might have been.