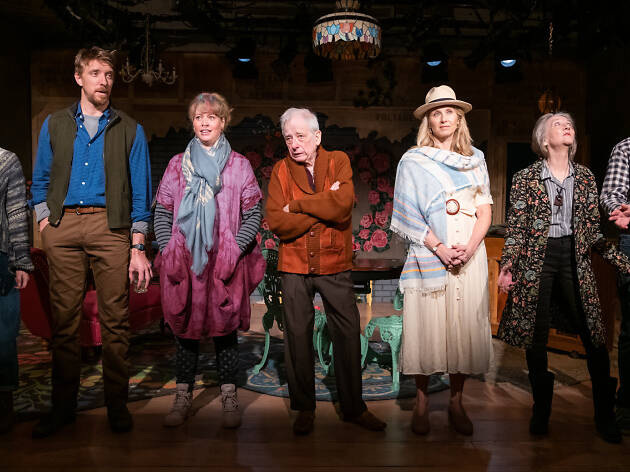 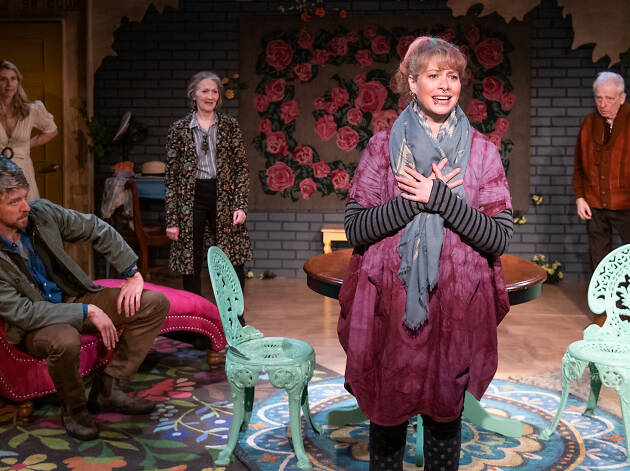 [Note: The production returns for an encore run at Theatre Row in June, 2019, with Kevin Isola assuming the role of Vanya.]

Despite the lack of a samovar and wistful-looking birches, Aaron Posner’s engaging Life Sucks.—the period is part of the title—is closely mapped onto Anton Chekhov’s Uncle Vanya. In the haze of late summer, Sonia (Kimberly Chatterjee) yearns for the dashing Dr. Aster (Michael Schantz), while her uncle Vanya (Jeff Biehl) lusts after Sonia's stepmother (Nadia Bowers); Sonia’s father (Austin Pendleton) pontificates and fusses and closes his eyes to Ella’s clear attraction to the doctor, and everyone works at cross purposes to their own happiness. Posner may have borrowed Chekhov’s kaleidoscopic love pentangle, but he’s updated events to the present day and salted the evening with postmodern hijinks, which include frequent check-ins with the audience and a theaterwide show-of-hands about regret. It’s a comedy! It makes you cry! Tl;dr: It’s Chekhov.

Life Sucks. is the third in a cycle: Posner has also tweaked The Seagull into Stupid Fucking Bird and Three Sisters into No Sisters. The freewheeling theater thinker Jeffrey M. Jones calls this kind of piggybacking adaptation “gauge theater” because it constantly measures and reevaluates the distance between the original and the new version. Often, even elsewhere in Posner’s own Chekhoviana, that mental push-me-pull-you can be a little tiring, but not in Life Sucks. It helps that one could mount a superb Vanya with this exact cast; it’s a dream team, warm and real and confident under Jeff Wise’s calm direction. And Posner's credo—if your life sucks, you can still make other people’s lives suck less—resonates beautifully with the 1898 play. There’s a kind of spiritual medicine hidden in Vanya, and Posner has recalculated the dosage to do real good to an audience with 21st-century preoccupations. Roll up your sleeve and make a fist: After one quick two-and-a-half-hour injection, you’ll be ready to face the spring.