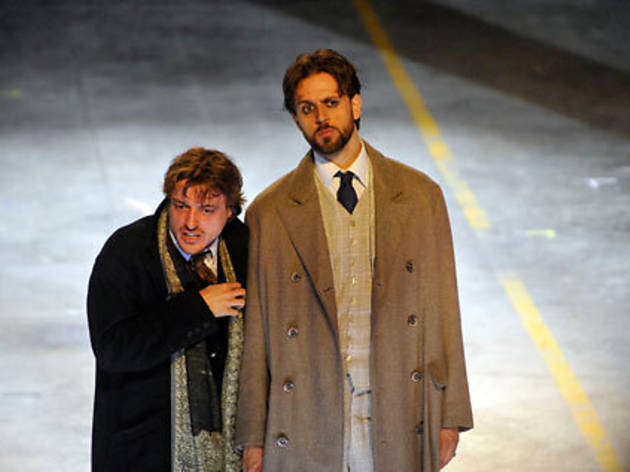 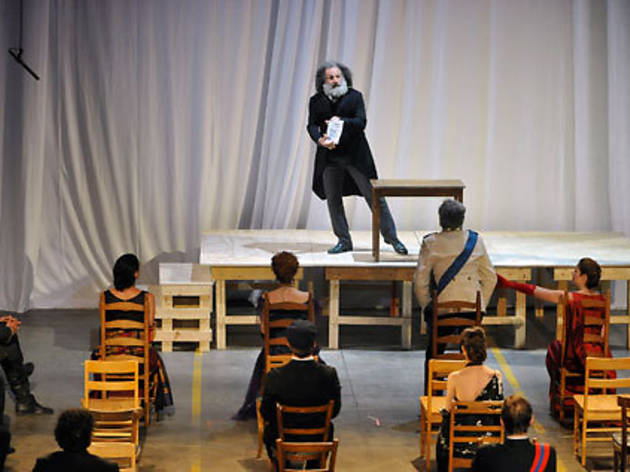 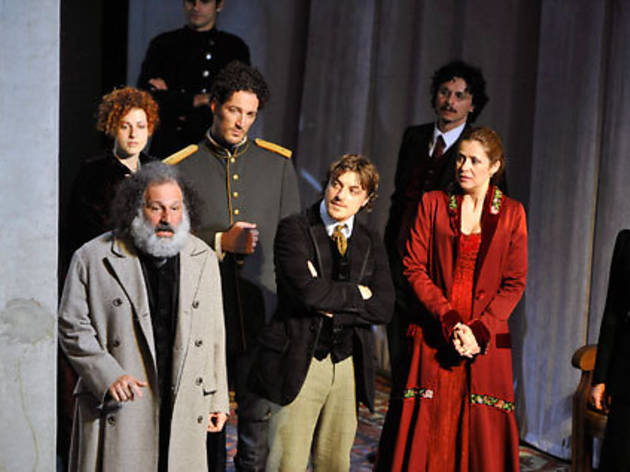 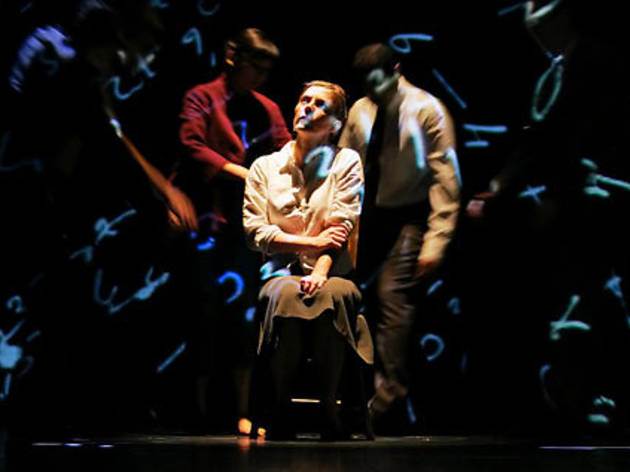 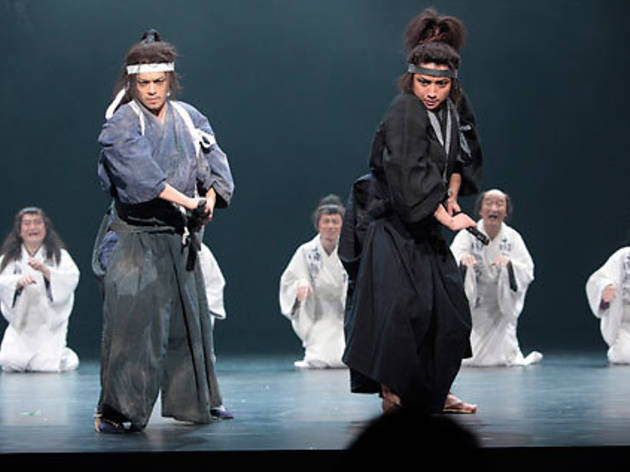 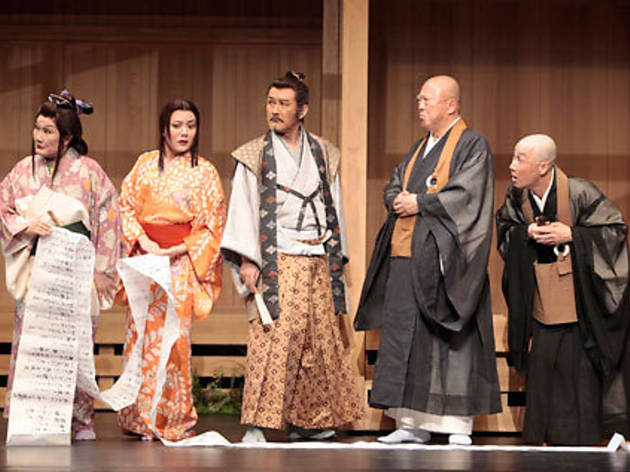 A Disappearing Number. Conceived and directed by Simon McBurney and Complicite. With ensemble cast. 2hrs. No intermission.

Not knowing what contingencies shape Nigel Reddin’s perennial buffets of international concerts and plays, I’d be reluctant to assign thematic unity to any Lincoln Center Festival. But hey, it’s fun to try. Last year, it seemed that Slavic misery was on the artistic director’s mind, what with the interminable epics about madness and tyranny imported by Reddin from Russia and Eastern Europe. From what I’ve seen thus far of LCF 2010, I would identify obsession as this year’s keynote. In the three most anticipated productions—Musashi, The Demons and A Disappearing Number—characters are variously possessed by ideals of revenge, socialist revolt or numerical rigor. Sometimes, as with The Demons, there’s a meta-obsession: German berdirector Peter Stein’s mad devotion to the letter of Dostoyevsky’s 1872 doorstop (rather than to its spirit; more on that later). And then of course, let’s not overlook the zealotry of New York’s art-theater fans. Those brave souls showed a willingness—nay, an eagerness—to sit through a combined 17 hours of butt-punishing stagework, in these three shows alone. It’s the audience that deserves a standing ovation.

But before we tear a rotator cuff patting ourselves on the back, let’s make one thing clear: Even when we’re bored or befuddled, LCF is pure oxygen for theater geeks. Where else will you see a Noh-inflected samurai dramedy like Musashi, based on the same-named serialized novel by Eiji Yoshikawa?

In this eccentric mix of slapstick, clowning and Buddhist pacifism, we begin with the promise of a smackdown. Swordsmen supreme Musashi (Tatsuya Fujiwara) and Kojiro (Ryo Katsuji) enter running on a beach, katanas drawn. After a bit of braggadocio and thrusting, though, the bout is over, with Kojiro (supposedly) mortally wounded. Flash forward a few years and Musashi has retreated to a Buddhist shrine in the forest. Kojiro, healed and spoiling for a rematch, demands satisfaction. Over the next three hours, the warriors wrestle over honoring codes of violence versus respecting the sanctity of life. Fight enthusiasts, you have been warned.

Even though one grows restless toward the end of Hisashi Inoue’s overstuffed farce, it’s worth it to see Tsukasa Nakagoshi’s lovely set: a wooden shrine surrounded by tall, leafy bamboo trees. In a beautiful touch, director Yukio Ninagawa has them rustle and sway in a kind of choric approbation.

Overlong though Musashi may be, it’s a breeze compared to the marathon that is The Demons, director Peter Stein’s crazily inclusive adaptation of the Dostoyevsky novel. This 12-hour endurance test—including two hour-long meal breaks and four intermissions—has a few strikes against it, some rather damning. First, it’s silly to ask spectators to pony up as much as $400 for a show with a teatro povero aesthetic whose theme is toppling the pampered overclass. Also, the venue, a drab warehouse on Governors Island, works against the production. Better to have found a space with natural light, given the daylong duration of the piece. And then there’s the biggest issue: Stein’s carving of the material—or lack thereof.

What the director doesn’t seem to appreciate is that Dostoyevsky—for all his febrile verbosity—depends on atmosphere and powerful imagery. In the novel, the murder of Shatov in the park, and later, the suicide of Kirillov, are spectacularly vivid—and mostly wordless. Mood and image are where this Demons fails. Despite the starkness of the production and some apt lighting choices (blue fluorescents dominate at the end), there are times when we might as well be following a radio drama. Would that Stein had trimmed an hour or two and crafted powerful tableaux. Instead we get what amounts to a stunt adaptation: Hewing so close to the letter of the source (translated into Italian!), the spirit dribbles away over the course of a very long day.

Despite all this, The Demons is an enriching experience—especially if you didn’t pay for it. Contrary to advance spin that it’s a snob hit or the epitome of highbrow masochism, Stein’s literary-social experiment is, largely, an unpretentious pleasure (tasty meals cancel out hard seating). Only the most soulless and unimaginative of spectators (or critics) could dismiss the event as a waste of time.

It’s a paradox that the briefest of these shows felt the longest: Complicite’s A Disappearing Number. More than at any time during The Demons, I was sheerly bored during large swaths of this dense, earnest attempt to dramatize the story of Srinivasa Ramanujan, a self-taught Indian mathematics genius who befriended English professor G.H. Hardy in 1913.

Although prime mover Simon McBurney’s awed fascination with the elegant aesthetics of pure math comes through clearly in the welter of video-projected numerals and quick cutting between time periods, he neglects the human elements of his story, leaving us with an almost smug and hermetic collage that makes us care little for the metaphor-lugging characters, not even Saskia Reeves’s nerdy number-cruncher, a fictional, modern-day analog to Ramanujan.

The festival ends this weekend. One hopes that by the time it does, Reddin’s other offerings leave us something to really obsess over.