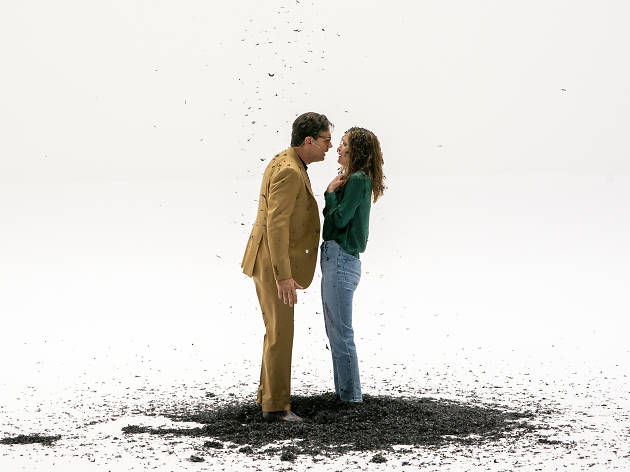 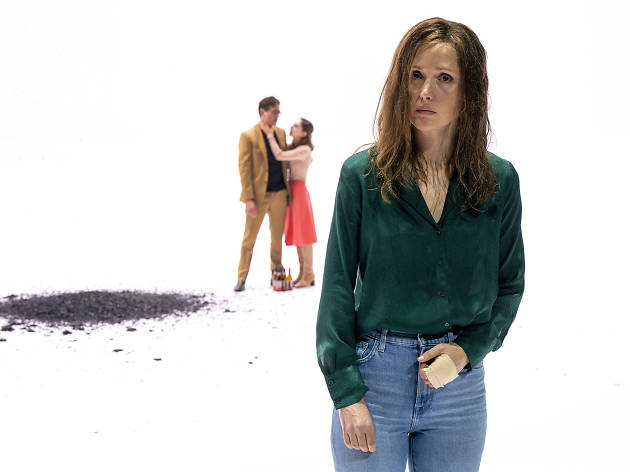 The playing space of Simon Stone’s Medea at BAM is a vast expanse of bright, pristine whiteness. You know right away this can’t last: It’s a mess waiting to happen, a conception of immaculacy whose purpose is to be defiled. Since this is a version of Euripides’ ancient tragedy of betrayal and child murder, there will, of course, be blood. There will also, in the production’s most beautiful stage effect, be ashes—a slender column of them falling slowly from the ceiling, sometimes in feathery clumps, to form a black mound on the floor, like a photo negative of snow.

Like Stone’s Yerma, which was at the Park Avenue Armory in 2018, Medea is an updated account of an older story about a woman driven to terrible violence. In this case, the director-playwright has augmented his classical source with details drawn from the real-life case of Debora Green, a Kansas City doctor who murdered two of her children in 1995 while in the midst of a contentious divorce. Rose Byrne plays the Medea character, Anna, a hard-drinking research scientist who has just been released from a mental institution after trying to poison her husband, Lucas (Bobby Cannavale), with whom she shares two young sons. The callow, social-climbing Lucas is leaving her for a younger woman (Madeline Weinstein), the daughter of his powerful boss (Dylan Baker), and the boys are caught in the cross fire.

Stone’s staging takes a multi-Medea approach. Anna’s face is often projected onto an enormous screen above the stage, where we see her in extreme close-up: every crow’s foot, every pore, every flicker of desperation in her eyes. The effect is personal yet detached; we might be watching an observation video at a psychiatric clinic. Byrne is riveting, but the effort at psychological dimension in a modern setting detracts from the play’s mythic dimension. Stone's Medea is ultimately the story of a woman who murders people because she is severely mentally ill. And although much of this brief show is striking, it doesn’t hit us where it hurts, especially at the inevitable climax. While the emotional violence is front and center, the actual violence is uncommonly tactful and mild; this may be the gentlest double infanticide you’ll ever see. Thus does Stone let both Anna and us off the hook. He employs the aesthetic as anesthetic.