This fall, Manhattan Theatre Club is admirably working to expand its horizons by devoting both slots in its Broadway schedule to works by Black playwrights. Meanwhile, at its Off Broadway digs at City Center, the company is mounting a show that might have been imagined by committee to appeal to MTC subscribers: Morning Sun, a 100-minute meditation on aging that doubles as a Boomer nostalgia trip, written by name-brand playwright Simon Stephens (The Curious Incident of the Dog in the Night-Time) and starring three of the city’s most accomplished actors: Edie Falco, Blair Brown and Marin Ireland.

What’s not to like? Nothing, really, but ultimately there’s not too much meat on this bone. Morning Sun takes its title from—among other things—Edward Hopper’s painting of the same name: “I like the strange expression on the woman’s face and wondering…if her face is just kind of frozen because she’s gone to somewhere in her head that she can’t ever talk about,” says one character about it. The play aims to unpack that kind of unspoken inner monologue—in this case, the sequence of memories that flood back to a woman named Charley (Falco) as she nears her own death. (The image of a morning sun also rises twice elsewhere in the play, both times in connection to the loves of Charley’s life.)

Charley is a regular sort of person—a receptionist, middle class, on the shy side, bit of a tippler—and her history is unmarked by great achievement. Brown and Ireland play her stringent mother and her unmoored daughter, respectively, but also stand in for other important figures from her past, including various men. Stephens orders it all very neatly; it’s less a flashback than a very slim biography, in 11 brief chapters, that begins with the births of Charley’s parents in the 1920s. Like a slightly overdiligent tour guide, the playwright (who is British) weaves in a century of New York City references: Macy’s, St. Vincent’s Hospital, Washington Square Park, the White Horse Tavern, Peter McManus, bagels from Murray’s, ice cream from Van Leeuwen’s, the demolition of Penn Station, the murder of John Lennon, Bobby Thomson’s 1951 home run to clinch the pennant for the Giants.

As this extended episode of This Was Your Life moves forward, director Lila Neugebauer steers it with a capable hand. With three actors of this caliber onstage, the show delivers several moments of poignancy—especially when Charley feels betrayed by other women—and Lap Chi Chu’s lighting does yeoman’s work in shaping the production’s emotional effects. But Morning Sun doesn’t have the sense of mystery within the ordinary that energized such previous Stephens works as Heisenberg and Sea Wall. During the blackout after the play’s final line, however, a lady behind me cooed an audible murmur of pleasure with what she had seen. I may not subscribe to this particular kind of theater, but some people clearly do. 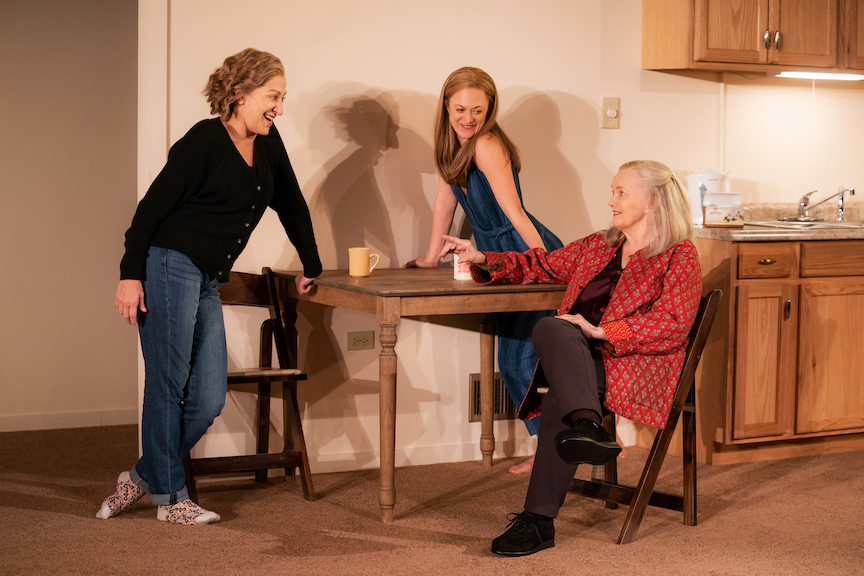