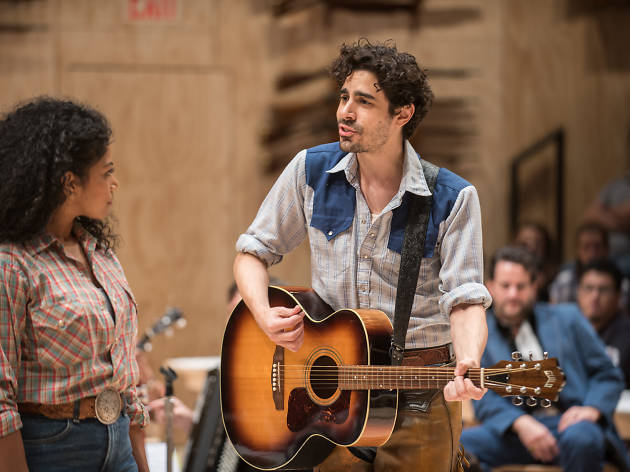 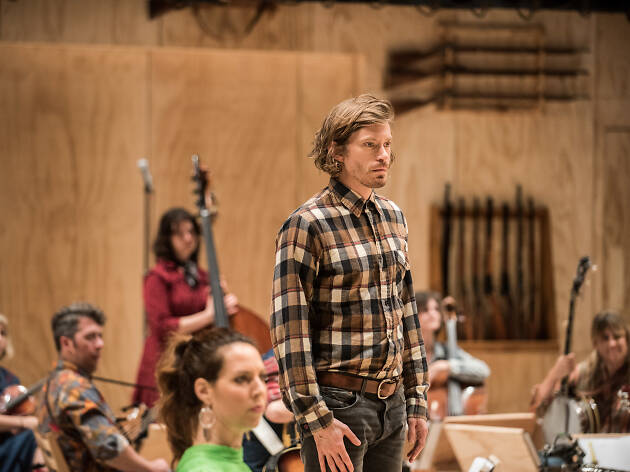 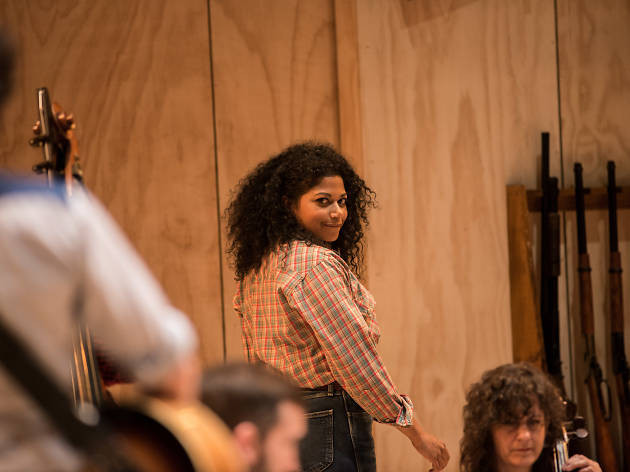 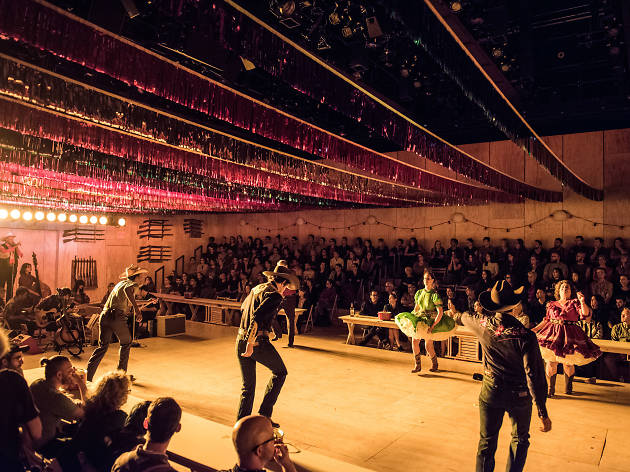 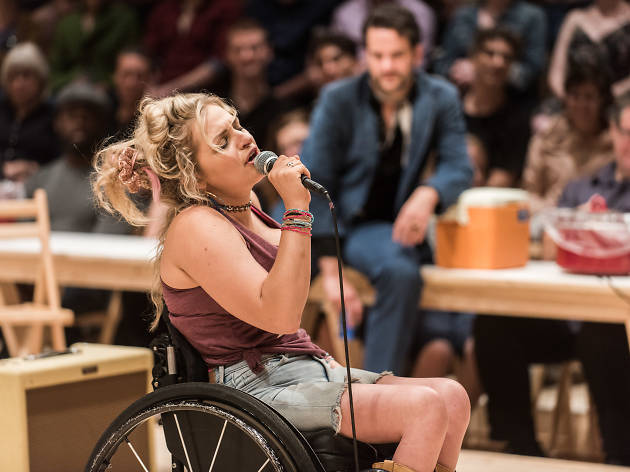 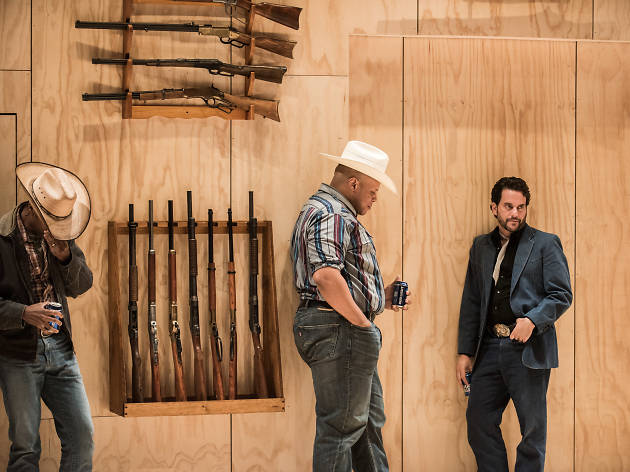 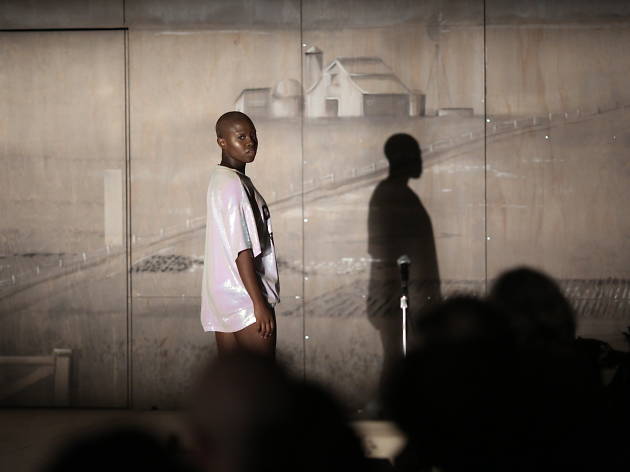 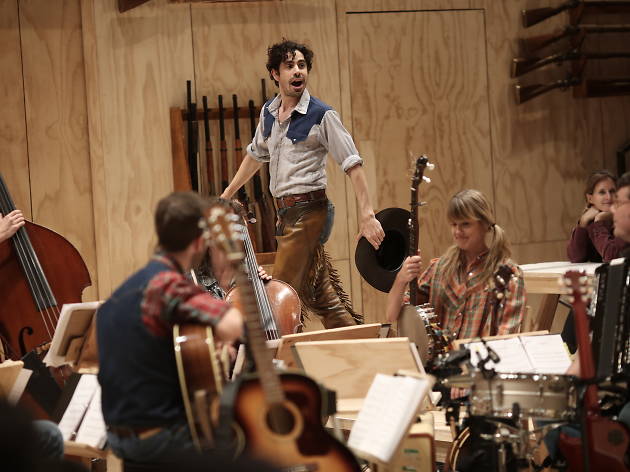 Everything is not OK in a powerful revival of Rodgers and Hammerstein's musical.

After a hit run at St. Ann's Warehouse last year, Daniel Fish’s fascinating and unsettling reimagination of Rodgers and Hammerstein's Oklahoma! has moved to Broadway, with its immediacy, strangeness and eerie sense of danger intact. (See original review below.) The show is now played in deep thrust, with the audience on three sides of the action. Nearly the entire cast of the Off Broadway version returns: Rebecca Naomi Jones and Damon Daunno are the main couple, Laurey and Curly, stained in this version by their unkind treatment of Jud (a rivetingly emotional Patrick Vaill); Ali Stroker and James Davis provide superb (and much-needed) comic relief as the sexed-up Ado Annie and her ardent wooer Will Parker, and Will Brill has assumed the part of the commitment-averse suitor Ali Hakim.

Seeing the production a second time allows one to appreciate not only the striking darkness that Fish and company have teased out of the material, but also the light they shine on small details. (Mallory Portnoy and Mitch Tebo are marvelous in small roles.) It's thrilling to see a Broadway classic rise to the challenge of so modern a conception. Oklahoma! it remains, but there's nothing corny about it.

RECOMMENDED: A guide to Broadway's shocking revival of Oklahoma!

[Note: The following is a review of the 2018 production at St. Ann's Warehouse.]

Director Daniel Fish’s bold, spare revival of Oklahoma! gives us the ranch but not the dressing. The musical’s cast of 12 performs in modern clothing, mostly without microphones, with the audience seated on either side of the minimal stage. The house lights are often left up, letting us take in the homespun Western feel of Laura Jellinek’s set: wooden risers, colorful banners, racks of guns on one wall. But sometimes the room goes pitch-black, as when Laurie (a wary, ungirlish Rebecca Naomi Jones) is alone with her would-be suitor, Jud (the lanky Patrick Vaill, tense with incel self-pity), or when Jud’s rival, Curly (Damon Daunno), visits him in his creepy smokehouse. There are pockets of dark menace in the show’s wide-open spaces.

The music, smartly orchestrated by Daniel Kluger for a seven-piece band, is not the central focus here, and aside from a riveting solo by Gabrielle Hamilton (in place of the traditional dream ballet), there is not much dance. Some comedy remains—the charming Ali Stoker plays the sexually freewheeling Ado Annie, James Davis and Michael Nathanson are her two beaux, and Mary Testa is the testy Aunt Eller—but even that has an edge of danger. While it looks and sounds very different from your grandfather’s Oklahoma!, however, the production doesn’t fight with the text. Fish’s vision treats Rodgers and Hammerstein’s 1943 musical with deep respect, shining a hard light on its underlying issues of justice, violence and the autonomy of women. It ventures into rough territory and leaves the show in a brand-new state.