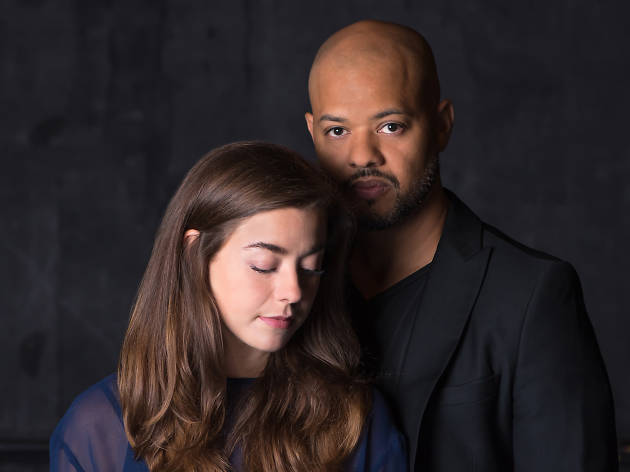 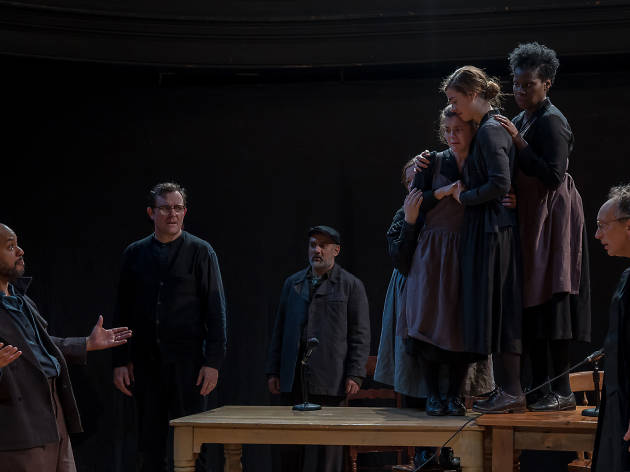 [Note: This is a review of the 2019 Bedlam production of The Crucible. The production returns for an encore run at the Connelly Theater on March 27, 2020.]

There has never been an inopportune moment to stage The Crucible, but with impeachment hearings underway, Arthur Miller’s indictment of miscarried justice seems especially instructive. Bedlam’s characteristically smart, stripped-down production pulses with an electric current and lays bare the play’s bitter truths. It is as gripping and revelatory a Miller production as New York has seen in years, and a bracing reminder of what a real witch hunt looks like.

What begins as seemingly absurd paranoia—provincial and insular, funny in the style of Christopher Guest—gradually expands into terrifying life-or-death drama, as in a fun-house nightmare. In 17th-century Salem, rumors of witchcraft spread after a group of girls are caught dancing in the woods at night. John Proctor (Ryan Quinn) sees his life methodically turned inside out when their ringleader, his dismissed servent and onetime dalliance Abigail Williams (a blood-chilling Truett Felt) points her finger at his wife out of jealous vengeance. The quiet restraint of Susannah Millonzi’s breathtaking performance as Elizabeth Proctor cements a shift in tone that endures until the tragedy’s final heartbreak.

Bedlam artistic director Eric Tucker, who also plays Reverend Hale, at first frames the story as a kind of wry pageant. The ensemble gathers in tableaux in the Connelly lobby—the first of the production’s many striking images. In John McDermott’s scenic design, the theater's stage and seating areas have been swapped, so the audience faces away from the proscenium and the action unfolds on a makeshift thrust. Dressed simply in dark tones by costumer Charlotte Palmer-Lane, the players rearrange wooden furniture and move through scenes with a fluid mob momentum. Les Dickert’s lighting design makes light and darkness seem like characters themselves, from single bulbs that cast menacing shadows to stark overheads that leave nowhere to hide.

Presented in association with the Nora, a Cambridge-based theater company focused on the feminine perspective, the production is acutely attuned to The Crucible’s gender dynamics, and maneuvers them with deft precision. The question of how and why women are believed assumes a surreal resonance. “I have no power,” Abigail and her followers testify in unison, seated behind a courtroom table. It’s a scene as haunting as it is recognizable.