George Clooney starred in the movie of this British writer's book, The Men Who Stare at Goats, Maggie Gyllenhaal plays a theremin in his film, Frank, and he's a frequent contributor on This American Life. Here Jon Ronson considers how he learned to tolerate (and, whisper it, come to really like) his adopted new home, and names his favorite spots in the city.

We moved to New York two years ago.

There was nothing in our decision that might be called a “reason.” I just gave my wife an excited look one day and said, “Let’s move to New York! We can see the The Book of Mormon and Sleep No More! Let’s fucking move to New York!”

We sailed here on the Queen Mary 2, so our dogs could sleep in the ship’s kennels and not have to live through the horrifying black roar of a plane’s baggage hold. As we neared New York, I heard some disturbing news. There was apparently another dog on the ship that we hadn’t seen, because this other dog was allowed to sleep in its owner’s bed. It was Pudsey, the talented 2012 dog winner of Britain’s Got Talent. The thought of Pudsey’s special privilege haunted me. Pudsey was sailing to New York like a fucking king.

It suddenly hit me. In London, I had been Pudsey. In London, I, like Pudsey, knew how to walk like a human. I had apparently sentenced us to start again from scratch.

We rented a place on the Upper West Side. Shortly after signing the lease, I read a New York Times article about a man who hosted dinner parties in the neighborhood called the Influencers Network. The piece described him standing on a table and telling his cheering, applauding guests—socialites, philanthropists—“Thank you for coming to my home and spending my life with me.”

The reporter basically described it as the loveliest thing she’d ever seen, but it sounded to me like the scene in Paths of Glory where they have to slap the man awake so they can execute him.

On our first night, we took our dogs for a walk, and a woman bent down, I assumed, to stroke them, but instead she yelled in Floppy’s face: “You’re an asshole.” A few nights later, during another walk, a passerby said, “That dog has bad energy.”

“You’re wrong,” I didn’t yell back. “Floppy has extraordinary energy.”

My wife and son were both loving New York. One night, I glanced around a packed subway carriage and whispered to them, “If this were London, I’d know what everyone was thinking.” I looked panicked. “Here,” I continued, “I have no idea what anyone’s thinking.”

And my wife and son replied in unison, “Why is that worse?”

I decided that a way to feel at home would be to keep going to the same places over and over. Familiarity would trick my brain into believing I belonged. So I started taking long, beautiful walks up the Hudson from the West 79th Street Boat Basin to the George Washington Bridge. On one of these walks, I saw a fisherman and a woman staring out across the water.

“There’s someone out there swimming,” the woman said to me.
“Oh?” I said.
“Yeah,” she said. “Some crazy woman is swimming out there.”

I looked out across the water, but I couldn’t see anyone.

You know how when you stub your toe, there’s a moment of nothingness before the pain kicks in? That’s what it feels like to arrive at a tragedy before the emergency services.

It was weird and quiet and we all just stood there. And then four fire engines arrived, and two ambulances and divers in wet suits and a helicopter and three NYPD rescue boats—that overabundance of emergency workers that always seems to converge in seconds at the site of a crisis in New York City. Sometimes this city feels like a great machine, and all of us cogs within it, like clock parts, beavering away for the greater good, and when something goes wrong, the machine corrects itself with discipline and efficiency.

It wasn’t a crazy woman. It was a girl, 17, who’d been caught cheating in school.

One day, after living here six months, I was standing in Riverside Park watching the police officers glare suspiciously at everyone. This place is so regimented, I thought. So many cops, so many forms to fill out, fucking health insurance…and suddenly I stopped. Because I realized: It had all fallen away. My confidence. It had all gone.

I was just a man standing in a park.
I really wanted to go home.

And soon after that, things started to get much better.

Actually, things were already getting better; I just didn’t realize it. My circumstances being what they were, I’d been feeling drawn to write about people who, like me, were nosediving into the abyss in New York City. I’m talking specifically about recipients of public shaming—people who had, for example, told a bad joke on social media and been torn apart for it, fired from their jobs, cast out into the wilderness, left a wreck on the floor. The book I ended up writing, So You’ve Been Publicly Shamed, wouldn’t have existed if I hadn’t moved here. (It will be published in March.) Sometimes you should do things because they’re hard.

And something great happened. The promoter Marianne Ways suggested I do a monthly show at Union Hall in Brooklyn, with the incredibly funny Irish comedian Maeve Higgins. We’ve called it I’m New Here—Can You Show Me Around? We invite comedians and writers and storytellers to tell their own immigration stories. There are lots of émigrés in the audience, too. Suddenly, New York no longer felt like a weird, jagged, intimidating, yelling machine. Now it felt like a village: familiar and surprisingly small, a place where people can try things out and nobody shoots you mean triumphalist glares if it goes wrong. When London writer Zadie Smith first moved here and started hanging around the storytelling circuit, she said the same thing to a friend of mine: "What?" she said. "You mean people support each other here?" Believe me, that’s a big surprise for a Londoner.

One of our I’m New Here guests a few months ago was the writer Elna Baker. A celibate Mormon in New York, she moved here from Salt Lake City. (The celibate-Mormon part didn’t last long: Saying yes to things became more appealing to her than saying no, she says.) During her talk she said something lovely about this place: "In New York," she said, "if you allow it, your day can end up in a totally different place to how it started."

The things I don’t understand—they’re not intimidating to me anymore. They’re mysterious. 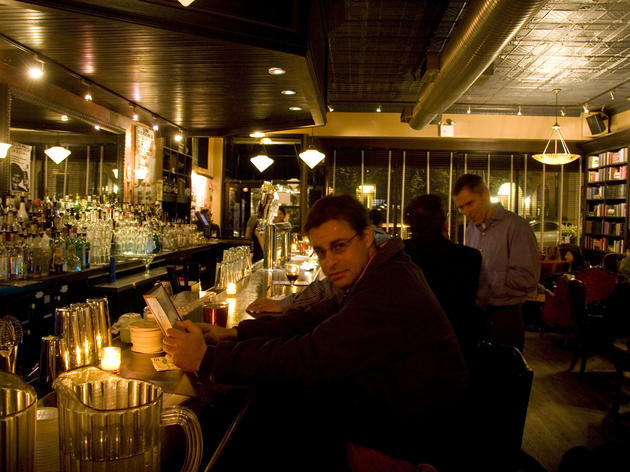 One of my early New York gripes was that too much of the culture revolves around restaurants. I’d much rather see some comedy or storytelling in a bar room basement than eat. In restaurants after all that “Mmm! Yum!” what’s there to say? It’s food. The Union Hall has great comedians like John Hodgman trying out new things. It’s small and the view of the stage is perfect and the sound is great. Ditto its larger cousin down the road, The Bell House. 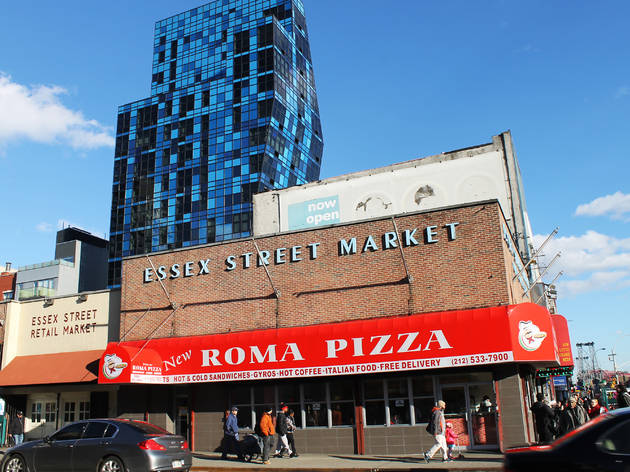 If you must eat you may as well make it strange and memorable. This is food as chaotic art: like the metal tankards stacked with four weird layers hidden under pancakes – mac and cheese and lemon ricotta and hoisin BBQ duck. It’s incredibly tasty and very high in calories. You dig in and can’t see what you’re digging down to. It’s like a treasure hunt. The first time I went to Shopsins I heard Kenny Shopsin scream at someone in the kitchen: “SHUT UP! SHUT UP!” And the terrified sounding man replied, “ I’m TRYING to shut up.” 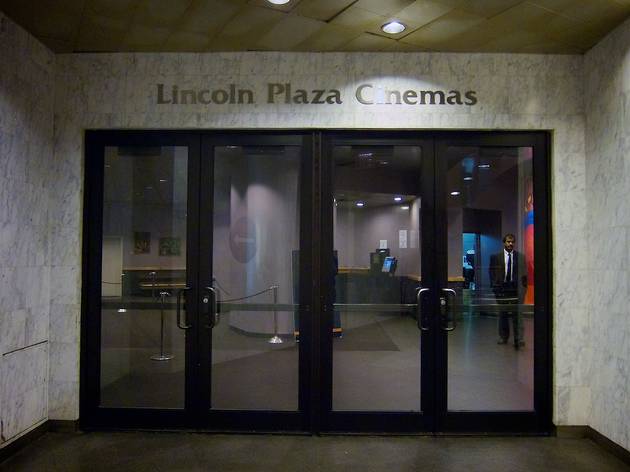 A perfect New York Cinema would have the schedule of the Lincoln Plaza and the mechanical reclining seats of the AMC on Broadway and 84th. But that place doesn’t exist. (Lots of places like that do exist in London). At the Lincoln Plaza I saw Boyhood two nights running. Richard Linklater did an unannounced Q&A after the first. When you leave the cinema and step out into the Lincoln Centre/Columbus Circle panorama it’s like exiting one movie and entering another. 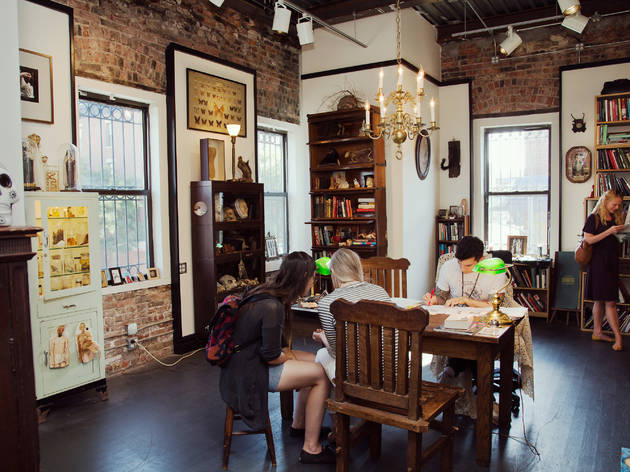 This is quite a narcissistic top five list. I apologize. The Morbid Anatomy Museum is brand new and dedicated to Fortean concerns – life after death, the paranormal, the odd two-headed this and that in a jar. Once a month they show one of my documentaries and I do a talk and a Q&A after. The next one – on November 13th - is about the time I snuck into Bohemian Grove and witnessed powerful men undertake a be-robed ritual that culminated in a human effigy being thrown into the belly of a giant stone owl. 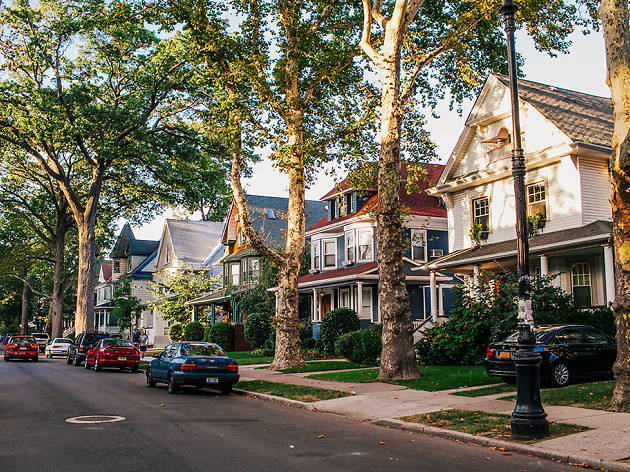 Anywhere. Along the river from the Brooklyn Bridge to the George Washington Bridge is my favourite. The best 13 miles I know.