My Account My Profile Sign out
My Account
Search
Worldwide North America United States New York State New York Taffy Brodesser-Akner on modern-day marriage, divorce and the one baked ziti you have to try in NYC

Taffy Brodesser-Akner’s new novel, Fleishman Is in Trouble, is an insightful look at modern-day marriage and gender relations that follows an Upper East Side couple going through a bitter divorce. At this month’s Time Out Book Club meeting, we spoke with the author about her research into dating apps and some of the real-life NYC locations that inspired some of the novel's key scenes.

This month, Roof at Park South, one of the best rooftop bars in NYC, provided our cocktail, which was inspired by the theme of divorce (as many cocktails have been before). Read on for the delicious recipe and our interview with Brodesser-Akner!

"I wanted to use ingredients that are counterintuitive and force them to work together. I searched for flavors that would feel spent,” explains Rafa Garcia Febles, beverage captain at the Park South Hotel. “Laphroaig is a peaty scotch with a smoky, ashy flavor, and I added Okinawan black sugar, which has been cooked down until it is bitter. I also added Awamori— which is a Soju native to Okinawa made from Indica rice—and stretched it with Amontillado sherry, an oxidized style of wine that’s been exposed to the elements. With this combination, all this elemental stress has changed the character of these components into something totally different, with a long, decaying finish."

We write a lot about the state of dating in the city, and a lot of your novel deals with what it’s like for a divorced dad to be on dating apps in NYC right now. What kind of research did you do for that?
When I turned 40, I had a lot of friends who were getting divorced, and they all showed me their phones. It was wild to me that, on the same streets where I was being dowdy and schlepping my children, they were having these hot sex lives filled with people who were looking for sex. I couldn't believe that these parallel universes existed. I also signed up for a few apps—I think it was Tinder, OKCupid and one other, which I think was actually a prostitution service! I’m 43, and I’ve been married for a while. The last time I did this, I was on J-Date before it had a mobile app. So, I think that, in a weird way, [it made me] a good researcher. But then I quickly had a very awful feeling of: I'm a journalist. There are very strict guidelines for when I am allowed to go undercover. So, I quickly deleted them from my phone. Like, really quickly. After maybe an hour or two. Or maybe it was even a half hour. I don't know. It was terrible.

Do you think the proliferation of apps has had a positive or negative effect on dating?
I am nonjudgmental about it. I have no opinion about it. My only opinion is against the people who say that [the apps have] empowered women. I don't think [they’ve] done that. And if you’ve read the book, you know that I feel that women are not empowered. So, I think that people who say that this is so good for us, that it allows us to date like men used to—what I observed was that [women] are still following the same rules. Meaning, the men are still calling the shots, and the women are still doing what they can. The men are still asking for what they want, and the women are still doing what the men want. But, just to complicate things, I do also believe it's an aspect of heterosexual women's sexuality, to want to please men. I think that's one of these evolutionary things.

There’s just more of a veneer of empowerment.
Nothing has changed. So, I have no judgment against it. But it’s really wonderful that you can meet people now while watching television. If you had told me in my twenties that, someday in the future, you would not have to get dressed in order to go out and meet people, I would have been like, "Great. Bring the future to me now.”

There’s a lot in the novel about women being heard and the idea of women speaking through men. As you were developing the book, when did you decide that the main character would be a man?
I always thought the main character would be a man, and I decided that not from a place of, like, "Here is my feminist statement." It's that I was writing the kind of book that I like to read. I thought the point of the book would be about how things have changed and that I would write a book about marriage and divorce. I did not know it would be so sharply critical of gender relationships outside of marriage.

How have marriage and divorce changed?
There’s a different way to date, and there are different reasons for people getting divorced. Maybe it's the same thing as apps, where it’s always been the same situation, but we just have new technology for it. When my parents got divorced, it was financial stress and different values. And the people I know now who are getting divorced, they all have different reasons for it. Sometimes it’s infidelity, sometimes it’s boredom, sometimes it’s, you know, "I'm not who I thought I was" or "You're not who I thought you were." But in every single case, the woman was always making more than the man or she was more successful than the man, and I felt like that [couldn't] be discounted. So that was the modernness that I felt like I could bring to a marriage novel.

As you were revising the novel, did your own thoughts about marriage change?
I wrote this three years ago, and now someone will say something about my book, and I’ll think, Wow. I must have really been going through something. But I think that when all of your friends are getting divorced, there is a contagion in the idea of like, wait, do they get to be young again? I want to be young again! I've never wanted to leave my marriage, but there was something pulling me toward nostalgia and toward a romantic notion of what their freedom [is] now. Even though, of course, they weren't free, and I'm not trapped.

This is such a New York novel. Are there any specific places around the city that worked their way into the book? Any recommendations?
Yeah. It was always a New York novel, obviously. The book always took place on the Upper East Side, which is my favorite place I’ve ever lived in Manhattan. Maybe other than Union Square when I was at NYU. There’s a lot of specific places [in the book]. The salad place on 85th Street that is either a Chop’t or a Just Salad. Whatever it is, it’s in there. Angelika [Film Center] is in there. One of my favorite things [that’s in the novel] is that there used to be a Tony's Di Napoli’s on Second Avenue and 81st Street. [My husband and I] ate there when we were falling in love one night when he was visiting from Los Angeles. During revisions of my book, I realized the Tony's wasn't there anymore, and I was devastated. But then I found out that there’s now a Tony's on Third Avenue and 63rd Street, and it filled me with so much delight! I don't know if you have ever been, but they will give you a conference-table–sized plate of baked ziti that I promise will make every single problem you have go away for maybe 15 minutes.

Our favorite bookstores in New York 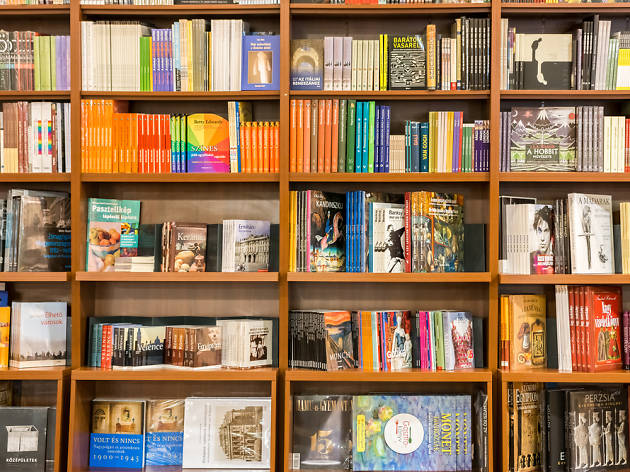