The best ‘speakeasies’ in Paris

Hunt out Paris’s new crop of Prohibition-style speakeasies for a flashy cocktail (or two), away from the main boozy drags

Born during the Prohibition era in 1920s America, the concept of the ‘speakeasy’ has endured much longer than anyone could have predicted. These mysterious yet glamorous hidden bars – normally accessed through weathered shop fronts, normal-seeming pizzerias or run-down launderettes – were originally envisioned as an outpost for illicit drinking, but have recently found a new 21st-century home in trendy European metropolises like Paris. Thanks largely to word of mouth, the concept has proven immensely popular with both in-the-know bobos and intrepid visitors craving a decent cocktail away from the tourist trail – often with the added bonus of glitzy dress codes, virtuosic jazz musicians and dazzling décors.

Think we’ve missed a great speakeasy in Paris? Let us know in the comments.

The best speakeasy bars in Paris 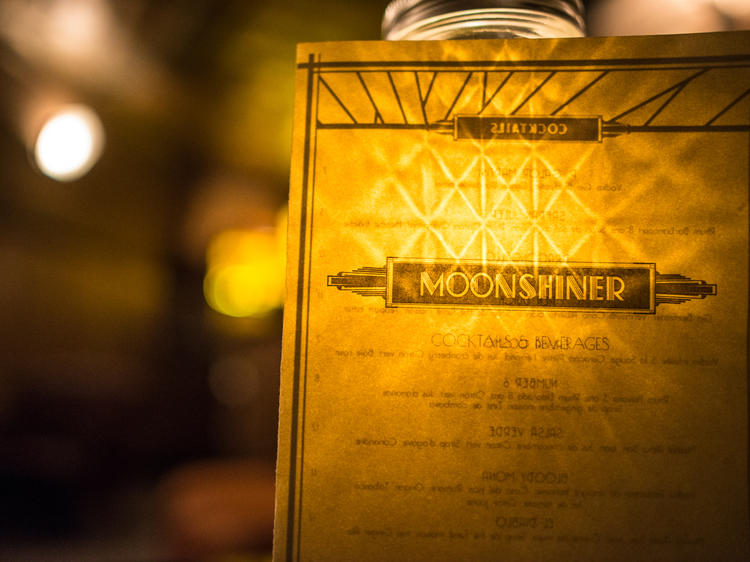 Strangely, few Parisian bars have had the same idea as Moonshiner. The concept is simple and has been popular for a long time in London, New York and Berlin: the secret. Behind a telephone box, underneath a kebab shop or on the other side of Smeg fridge, these ‘speakeasy’ bars are inspired by the clandestine drinking spots of prohibition-era America, tucked away in odd places that the passing drinker would never discover if he didn’t already know it was there. The more hidden the bar, the better... 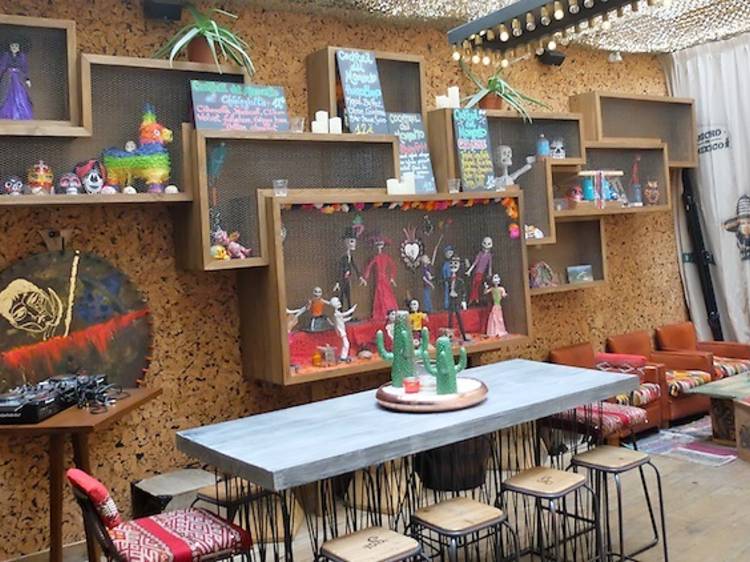 It’s safe to say mezcal is having a bit of a moment. The smoky and complex alcohol, a close cousin of Mexico’s other famous alcoholic export, tequila, is slowly becoming the drink du jour in Paris – helped in no small part by La Mezcaleria, a clandestine bar hidden behind the kitchen of Hotel 1K’s Peruvian restaurant. Sneak your way inside and you’ll find a bright, buzzing space with a glass ceiling and Mexican-inspired décor... 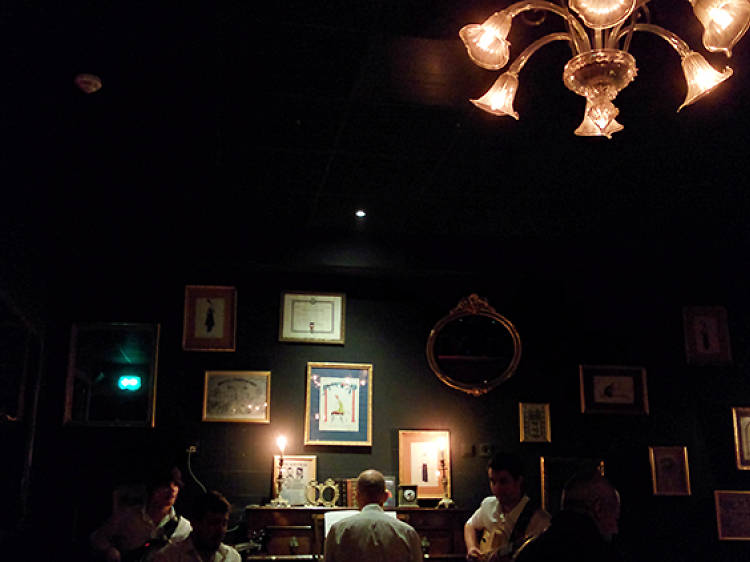 This speakeasy-style bar in 8th arrondissement does its fashionable best to capture the feeling of a clandestine bar in 1920s Chicago, as Prohibition was in full swing. Hidden behind a large black door, Blaine is located at the bottom of what appears to be a disused staircase. Whisper a password, follow a corridor and open a door, and only then will you reach the small candlelit space. The cheery staff all wear black trousers with braces, a white shirt and fedoras, while live musicians play jazz standards... 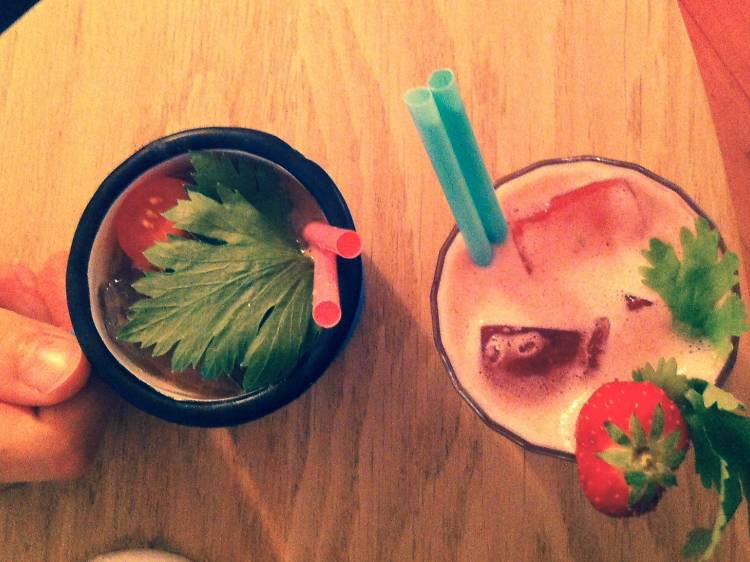 This bar is tucked away on the top floor of what looks like a relatively lifeless apartment block on Rue Boulanger, near République. But this is all part of the game for Le Lavomatic’s owners, who have also snapped up the ground floor and are opening a fully functioning launderette here in September 2015. Because of all this, and because you can only reach the bar by climbing up a dainty spiral staircase, the whole place has the air of an illicit speakeasy joint... 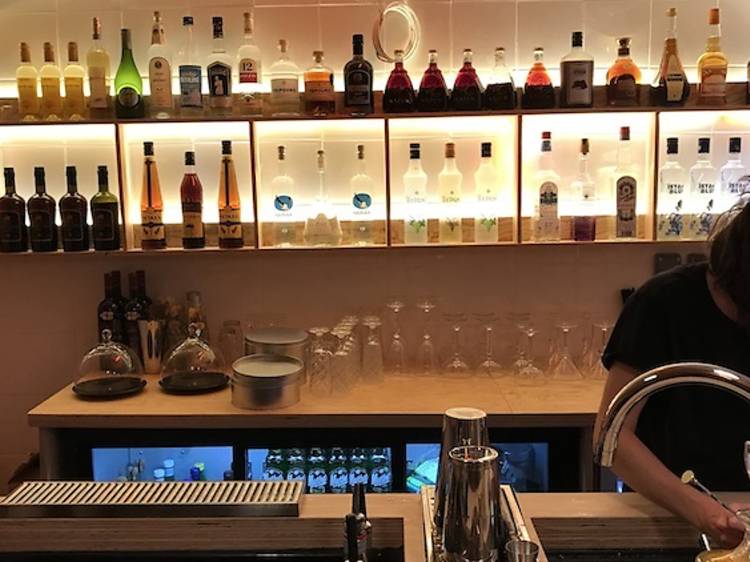 Below Belleville’s gourmet kebab shop OUR, hides Hammam Bar, a Mediterranean oasis in the middle of Paris. The location isn’t ideal for a late-night bar but with cocktails like ‘Le Shah’ – a reinvented Cosmopolitan made from Istanbul vodka and infused with lemon, raspberry liqueur, wild rose and lychee – the punters are sure to come, despite the Parisian prices (around €11). Try their Mediterranean-style Manhattan with Greek Metaxa liqueur or the Cypriot dessert wine... 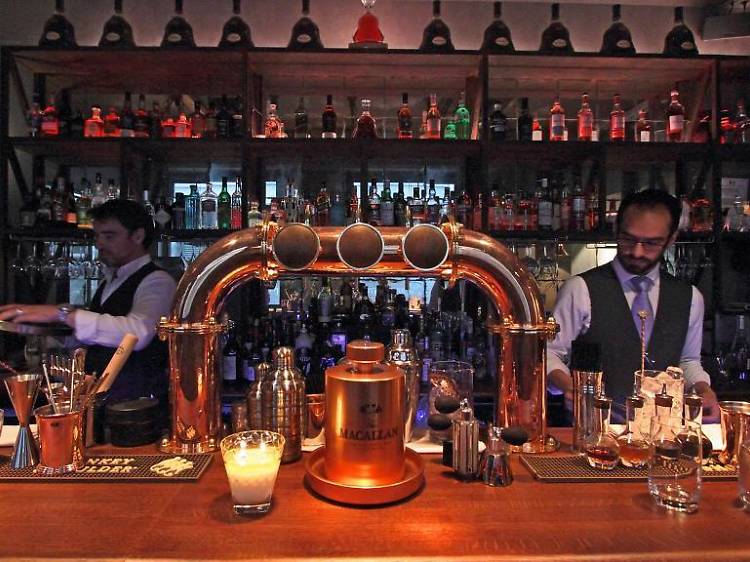 Gentleman 1919, located in the 8th arrondissement, is perhaps the archetype of masculine elegance. The pampered clientele sit back and relax with a scotch in one hand and a cigar in the other. Beard balms, Reuzel gel, Bullfrog eau de toilette, vintage red wine, Brimoncourt champagne: nothing is too good for the clients of this barbershop. Then it’s through to the back of the barbershop for the speakeasy’s discrete bar, bedecked entirely in wood and complete with a huge smoking area. Expect the classics – like their beautifully bitter Negroni... 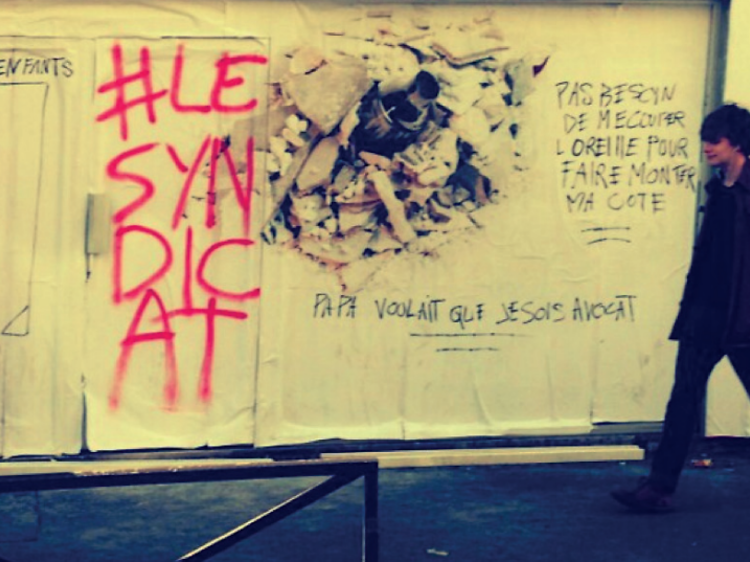 Le Syndicat cultivates the slightly mysterious air appropriate to its name, hidden away as it is behind a decrepit façade covered with a 5cm-thick layer of peeling posters and guarded by a bouncer – you almost expect him to demand a secret password. But co-founders Sullivan Doh and Romain Le Mouellic's dive bar proves, inside, to be kitschly sparkly and bronze-hued. The drinks list hits the fashionable vintage spot, with little-known liquors (cognacs, armagnacs, eau de vie and more) put to good use... 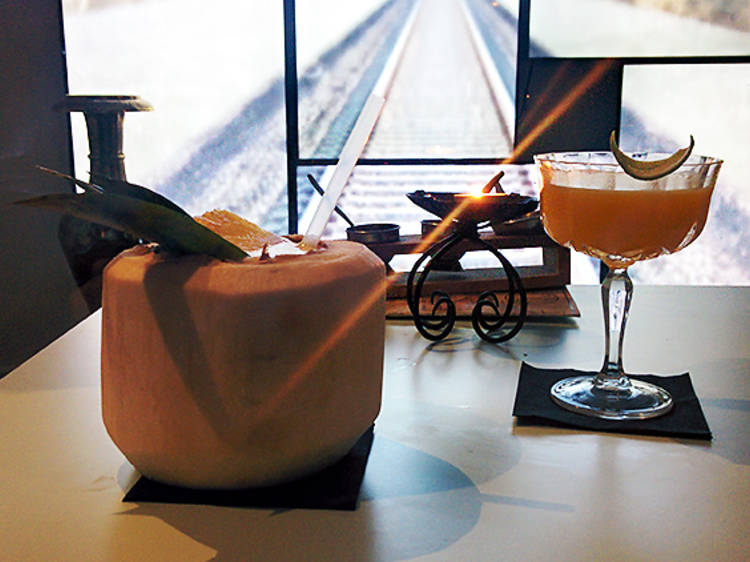 This ‘bar à naan’ (ho ho) near Porte Saint-Denis is an Indian-themed cocktail bar with themed snack food like naans and skewered meat. The interior is elaborately done out like the inside of a vintage train, with the long, narrow main room filled with leather benches and light streaming out of the ‘windows’ (screens hung on the wall showing various countryside scenes floating by). At the very end of the bar, a screen even shows a video of railway tracks rolling off into the distance... 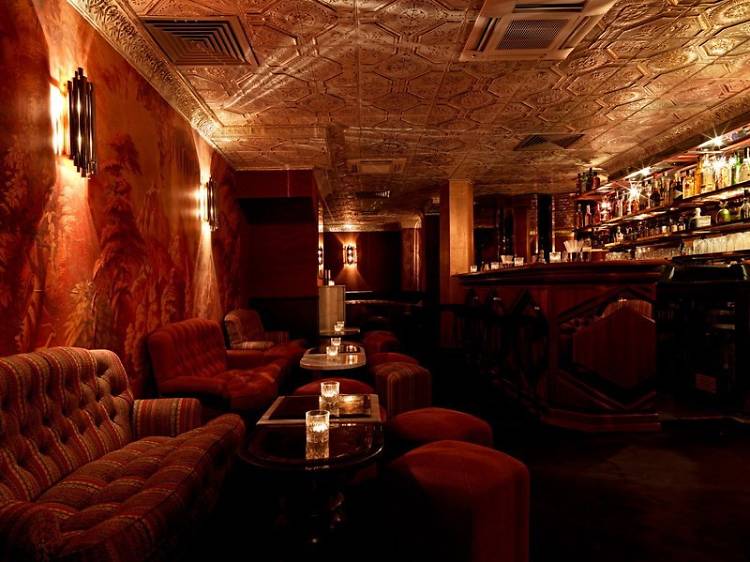 You reach Le Ballroom, another venture from the trio behind the Experimental Cocktail Club, via an unmarked black door and down a spiral staircase beneath the Beefclub restaurant. Here, well beyond signal range, you'll find red brick walls, an ornate tiled ceiling and a gleaming collection of spirits and liqueurs, which all create the perfect setting for this dimly-lit speakeasy-style cocktail bar. Waistcoat-wearing bartenders serve up drinks and banter at the comptoir, or there are Chesterfield sofas at candlelit tables for more intimacy... 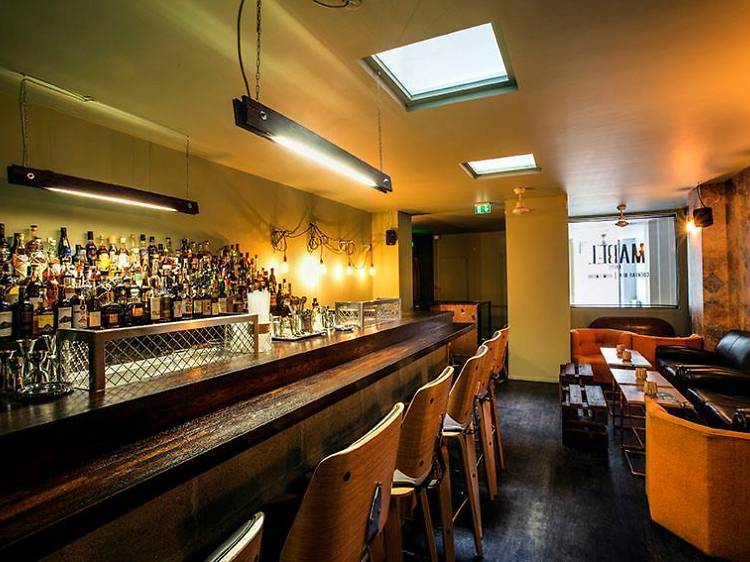 It’s easy to think you’ve made a wrong turn somewhere when you arrive at cocktail bar Mabel – on the outside, all you can see is a ‘grilled cheese’ café. But slink through to the back room, perhaps having ordered a toastie (at €8, a worthwhile investment), and you’ll realise you’re at the right address after all: a relaxed, pretence-free speakeasy. The drinks menu here is extensive and shrewdly curated, placing an accent on rums like Botran 15 Reserva, Bristol Caribbean, Barbancourt 3 Star and Chairman’s Reserve... 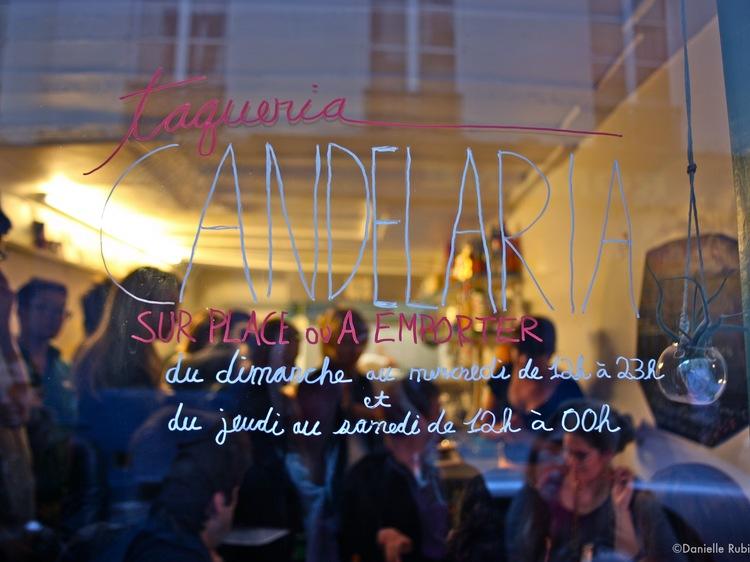 Has Paris woken up to the temptations of the taco? Apparently so, thanks to this taqueria, with its almost totally expat clientele (English and American rather than Mexican). The tiny white room with its open kitchen, a few stools and communal tables doesn’t give a hint of the hip bar behind, where the neighbourhood’s youth come to sip margaritas or the house specials, like the guêpe verte [green wasp] (tequila, lime, pepper, cucumber, spices and agave syrup)... 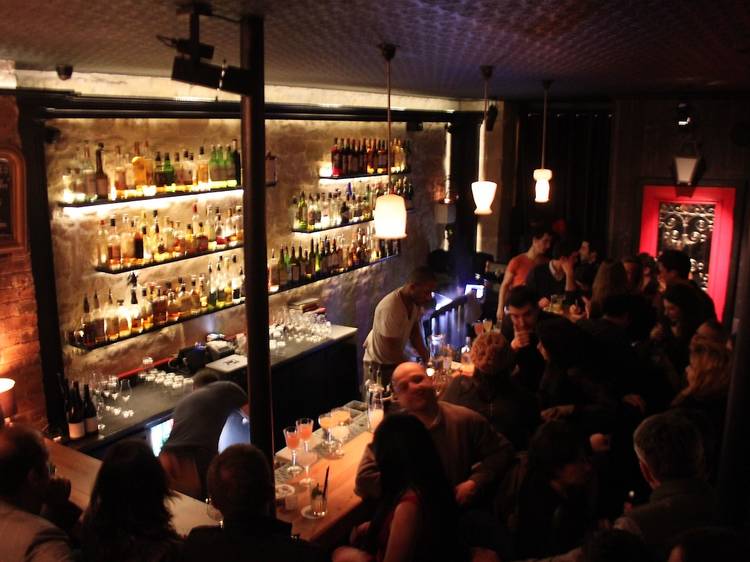 It’s impossible to miss the Little Red Door’s… little red door, lit up by slightly gaudy lights in Paris’s uber chic Marais quarter. Before even entering we predict we won’t be seeing the same remarkable social diversity that once defined speakeasies. We’re not wrong. Inside, suits, ties and twee dresses abound as the (90% British) crowd sips on a scotch or bourbon, clicking their fingers as a New Orleans swing group heats up the mellow atmosphere. This evening, Damien Etchegorry stylishly leads a quartet with music spanning from the twenties to the thirties...