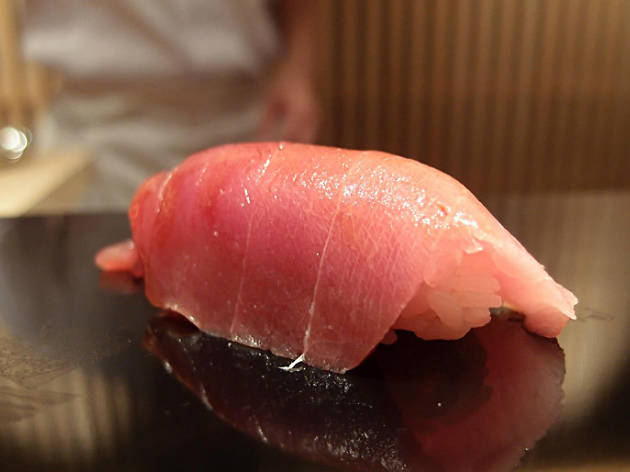 Step into the ryokan-inspired interiors of the refurbished Hashida Sushi Singapore and you might feel a little intimidated. But don’t be. Because Chef Kenjiro ‘Hatch’ Hashida is no stern shokuhin – he’s more likely to crack a joke as he moulds a flawless piece of nigiri before you.

The sushi joint, now expanded to seat 35 across three dining rooms, offers sterling Edomae-style sushi alongside modern interpretations of traditional Japanese dishes. And, yes, it’s omakase only: lunch ranges from $80 to $250 while dinner will set you back $350 or $500.

As is expected of a joint of this calibre, the seafood – delivered from Tsukiji almost on a daily basis – is impeccable. (It probably helps that Hashida’s father helms a sushi bar near the famous fish market.) Highlights of the nigiri include the Botan ebi, aged for two days and given a spritz of housemade shoyu, lightly seared bonito, and the house signature: sheets of fatty otoro, wrapped around rice, that dissolve on the palate. You’ll be smacking your lips well after you’re done with it.

The other dishes served as part of the dinner omakase straddle tradition and invention. A sashimi platter – ours has halibut, snapper, chutoro and a kind of octopus called mizu tako – comes with a variety of condiments. Sudachi juice and smoked salt are perhaps the more recognisable ones, but then you have a splash of tea oil, which adds a subtle earthiness to the seafood. And in our dipping bowls, the chefs mix their housemade shoyu with irizake, or ‘cooked rice wine’, that used to be a Japanese staple some couple of centuries ago.

The cooked dishes better demonstrate chef Hashida’s modern sensibilities. A dish of battered ayu and corn kakiage looks like something from a contemporary restaurant, thanks to the smear of Japanese dill purée on the plate. Slightly spicy in the tongue-numbing kind of way, the herb complements the sweetness of the ayu, fried with its own liver, and the corn fritter. And an agedashi tofu lookalike turns out to be an egg custard whose consistency lies halfway between chawanmushi and bean curd – it’s surprising, subtle and tasty all at once.