Interview: A sit down with Carles Abellán – the chef-owner of Tapas 24 Barcelona

Casting a spotlight on the Spaniard behind Tapas 24 who identifies with the Professor from the hit Spanish series, Money Heist

Growing up, Chef Carles Abellán was blessed to be surrounded by culturally rich food at home since he was a young bull. Along with his mother’s encouragement, he enrolled into the then-newly established School of Catering and Hospitality in Barcelona at 22 years old and never looked back. After a couple of stints, most notably in the kitchen of the Hotel Melià in L'Odissea where he met Christian Escribà and the other young chefs, they were dubbed as rising culinary stars in Barcelona.

But it was truly at the famed El Bulli that catapulted Chef Carles Abellán into the spotlight in 1984. What was supposed to be a two-week traineeship ended up in a six-year tenure where he flew under the wings of the revered Ferran Adrià, who mentored and groomed him to grow beyond the kitchen through opportunities to manage a team both in the kitchen, front of house and also dabble into the restaurant business.

All of that manifested into his Michelin-starred Comerç 24 and award-winning concept of Tapas 24 that opened near Passeig de Gràcia in 2006 with the latter remaining as one of Barcelona’s hottest dining destinations, attracting locals and tourists alike till today. Fast forward to mid-2021, Chef Carles Abellán partners with Singapore- based L'Angélus Group who brings over that signature Barcelona lifestyle to Singapore with its first Asian outpost, located within the cosmopolitan Quayside neighbourhood. But the pandemic did not allow him to grace the opening, until now.

How is the dining scene in Spain different – or similar – from Singapore?

I think that each country has its culture with food and in Spanish tapas, you’d always find that the tables are always full of dishes for sharing, and people dine in an ambience that is fun, friendly and above all, full of life. But it was not always like this as the concept of tapas was previously unheard of in Barcelona, unlike in other parts of Spain. This fuelled my passion to bring tapas culture to Catalonia which as we come to see, struck a chord with not only locals but even tourists from all around the world.

Both Singapore and Spain all have in common is that we like to enjoy food and the convivial casual nature of tapas allows us to connect or reconnect easily. The small portions and lively dining style are easily accepted, and I’m so heartened to see that in Singapore, the tapas culture is so popular amongst Singaporeans who also are very open to trying new things.

What’s your favourite food or place in Singapore so far?

When my wife, Natalia, and I first arrived in Singapore, we suffered from a little jet lag and we thought it would be a great idea to freshen up. So we went for a walk in the Singapore Botanical Gardens, bathing in the tranquillity and immersing ourselves in some lush greenery. Our highlight was definitely traipsing through the ethereal Orchid Garden as we both have a deep love of botany, especially Orchids. Marvelling at the vibrant colours of so many different delicate Orchid species, definitely helped soothe and balance our energies.

We’ve also had the opportunity to visit different markets and taste so many different types of local food from Hainanese Chicken Rice, some Peranakan food, all sorts of noodles and soups. But if I had to pick one favourite, it’s without a doubt the Chilli Crab. Uncovering flavours, essences, spices and textures altogether, help to inspire me when dreaming up new culinary creations and I also observed that the true taste of local gastronomy is in the hawker centres and food courts. We don’t need to look far to find the heritage of Chinese, Indian and Malay cuisine that is built within its identity.

What did you do differently during the pandemic that sustained your concepts and how did that work?

During the pandemic, it was really unfortunate that I had to close two of my five restaurants back in Spain. The restaurant sector was dealt with a terrible hand, very similar to Singapore, and we had to make the necessary pivoting plans to ensure that we sustained for the long run. Sometimes, I feel that it is necessary to close things to make way for new beginnings and that was what happened. The difficult period also gave us time to stop and think about how we did things and it was really about finding some good in all the bad. One of the programs that had seen success is a swift pivot to focusing on the restaurant- takeaways during lockdowns by bringing the restaurant to people’s homes. Truthfully, it was a salvation to the business.

Any advice for budding chef-owners?

Always do everything with passion whenever possible and never ever stop fighting for your dreams.

Bonus – Who do you identify yourself with in the hit Spanish series, Money Heist?

The Professor. I love being organized which gives me the ability and foresight to anticipate everything from a big picture perspective. 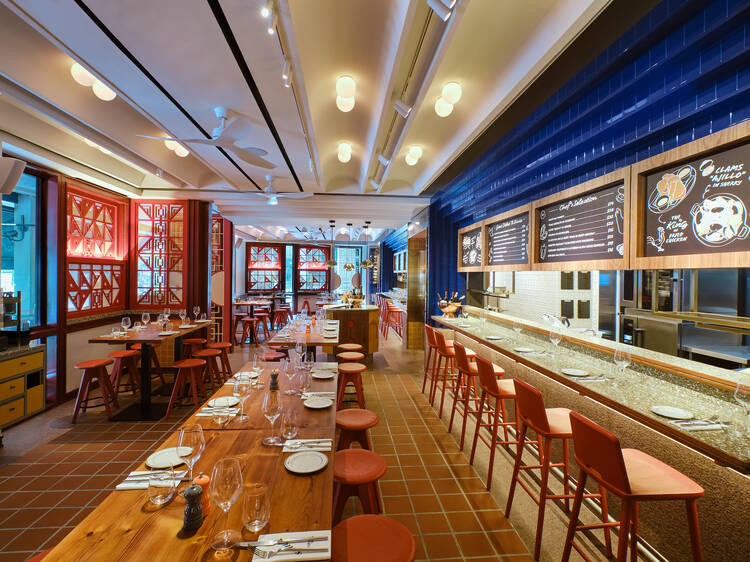 One of Barcelona’s buzziest – and busiest – tapas bar has arrived in Singapore. Tapas 24 has long been drawing big crowds with its small plates ever since it opened in 2006 by Michelin-started chef Carles Abellan. And now, the first Asia outlet of this well-loved restaurant can be found along the breezy banks of Robertson Quay. 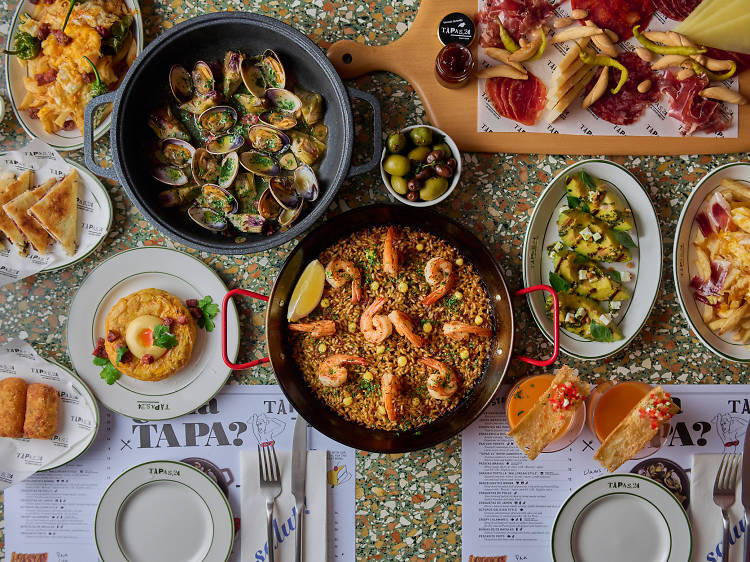 Tapas is a way of life and Chef Carles Abellán’s first-ever visit to Singapore is set to treat tapas lovers to a medley of Barcelona’s favourites and signature dishes from the famed Spaniard. Happening exclusively till February 27, expect the unexpected from unique pairings and ingredients personally brought over by Chef Carles that unabashedly reflect his inimitable personality and Spanish cooking flair. This is perhaps your best bet for a perfect weekend brunch retreat by the idyllic waterfront.