We've all been there. Looking for an easy card game to play in school in between classes? Dai Di it is. This game of Big Two is also a popular game to play during Chinese New Year, post-reunion dinner feasting.

With Dai Di, any group of four can become a powerhouse of excitement with players constantly trying to one-up each other. Ah... what better way to celebrate the festive season? 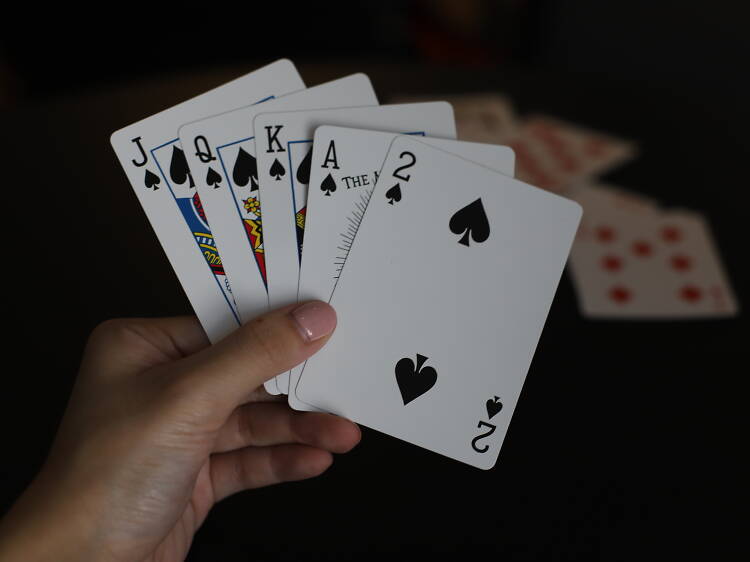 The aim of Dai Di is to get rid all of all the cards in your hand by constantly one-upping your opponents with cards played singly or in certain poker combinations (2 cards, 3 cards, or 5 cards).

The value of each card or combination comes from the numerical of the card(s) used, as well as their suits. The cards of the smallest value are the 3s, followed by the 4s, and so on and so forth till the picture cards. Then, it’s the Aces, followed by the 2s. The suits ascend in value in the following order: diamonds, clubs, hearts, and spades. Therefore, the weakest card in the game would be the 3 of diamonds, and the strongest is the 2 of spades.

To start the game, gather three other players – you can also play Dai Di with two or three players but four is ideal – and distribute a shuffled deck between yourselves equally, any extra cards can be put into the “pass” pile. The player with the weakest card (3 of diamonds) starts the round by putting the aforementioned card down (either singly or with whatever combination it can make) onto the table facing up. Said player also determines the number of cards each player must play during that round – if the first player plays with only one card, all other players must play with one card; if the first player plays with a combination, all other players must play with the number of cards in that combination.

The other players take turns clock-wise to climb above the value of the previous card(s) that were put down by their opponents. For example, if a 6 of diamonds was put down, a card of a higher value must be used to beat it – this includes a 6 of any higher suit, or a card with a numerical above 6; if a pair of cards were played, then a stronger pair must be used to beat it (more elaboration under the “combinations” section). If a player is unable to beat a card or combination, they may pass the turn over to the next player – and draw a card from the pass pile (if any). Once all players pass, the player who put the unbeatable card or combination starts a new round with whatever they choose. However, do note that a player is not allowed to finish their hand with a two of spades played singly.

To make the game more interesting, add some gambling money into the mix. Dedicate how much one card costs. Then, once there is a winner – a player who finishes their hand – all other players must pay the cost of all the cards left in their hands to the winner. For example, if each card costs $1, and you have three cards left in your hand when the game is over, you give the winner $3. 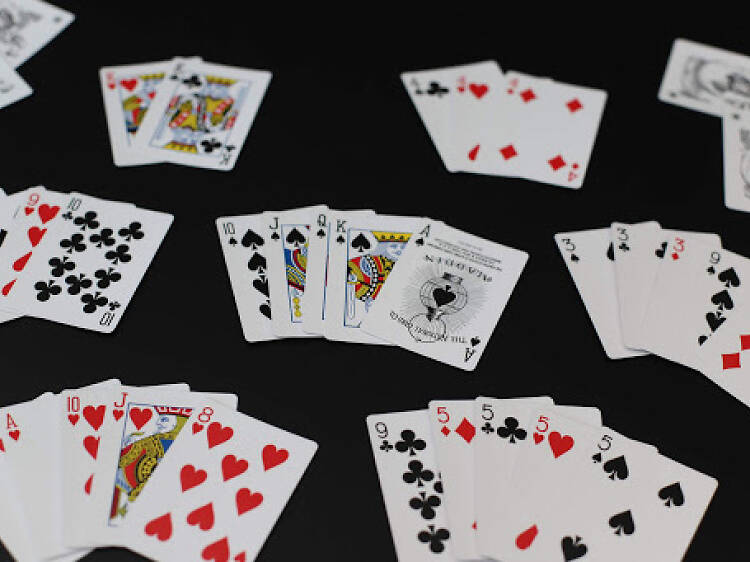 In the game of Dai Di, there are a couple of combinations that can be made. These include plays with two cards, three cards, and five cards.

To play a two-card combination, cards of the same numerical must be paired together (for example, a four of clubs and a four of hearts). To beat such a hand, another pair of a stronger value must be played – this includes a four pair with a stronger suit (four of spades and four of diamonds), or any pair with a higher numerical value.

To play a three-card combination, you will need three cards of the same numerical to be grouped together. An example is a five of diamonds, five of hearts, and a five of spades. To beat such a hand, another triplet of a higher numerical must be played.

There are multiple five-card combinations that can be played during such a turn. In ascending order of value, they are: Straight, Flush, Full House, Four of a Kind, Straight Flush.

Straight: A Straight consists of five cards arranged in consecutive numerical order, whereby the suits do not matter. An example of such a hand would be a seven of clubs, eight of hearts, nine of diamonds, 10 of spades, and a Jack of diamonds.

Flush: A Flush consists of five cards of any numerical, but all with the same suit. An example of such a hand would be a three of hearts, five of hearts, eight of hearts, 10 of hearts, and Queen of hearts.

Full House: A Full House consists of five cards made-up of a triplet and a pair. An example would be three fives and a pair of eights.

Four of a Kind: A Four of a Kind consists of five cards made-up of four cards of the same number, plus any other card. An example would be four sixes and a nine.

Straight-Flush: A Straight-Flush constitutes of five cards arranged in consecutive order with the same suit. An example would be a six of clubs, seven of clubs, eight of clubs, nine of clubs, and 10 of clubs. 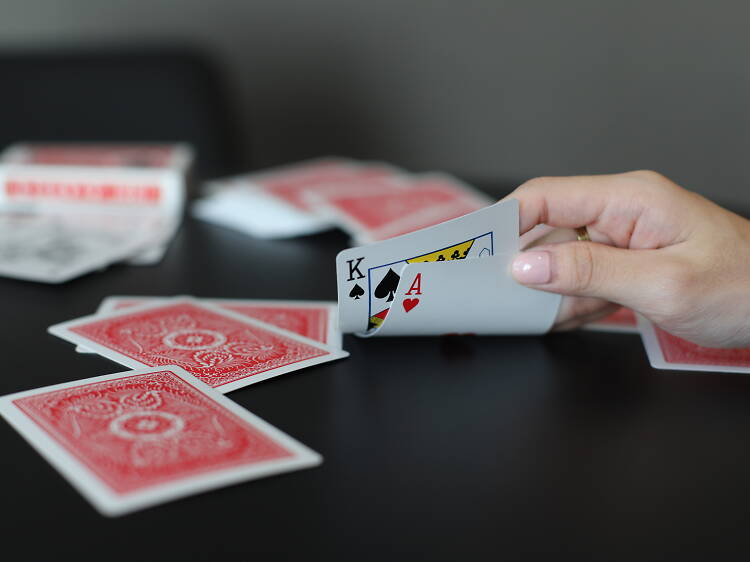 How to play Chinese Blackjack (Ban-luck)

Here at Time Out Singapore, we think no one should be left out of the Chinese New Year festivities. We made a bunch of "how-to" guides of the most popular games to play at your reunion dinner or when you visit your relatives during these 15 days. With Ban-luck, your New Year luck is really put to the test. With a possibility of winning twice, triple or even seven-times the amount you bet, this card game makes for a thrilling time around the table. RECOMMENDED: The best Chinese New Year takeaways and the best places to buy Chinese New Year decorations 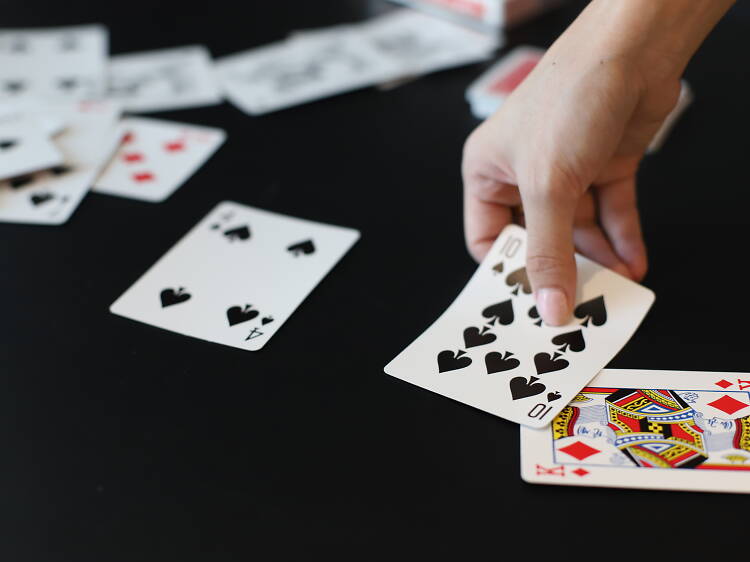 How to play In-between

Whether you're looking for a new way to bond with your cousins during Chinese New Year, or bored at a birthday party, turn to these easy-to-learn card games to keep you and your friends entertained. With In-between, the party size does not matter as this fast-paced card game is just as fun in both big and small groups. A word of advice: don't let greed get to you – it's as easy to lose as it is to win in this game. RECOMMENDED: The best Chinese New Year takeaways and the best places to buy Chinese New Year decorations