An ideal day for Ken Done is one that is mostly spent in his studio. He wakes up at his Mosman home near Chinamans Beach, he feeds the birds, feeds the fish, goes for a swim, and gets stuck into his paints.

“The easiest thing in the world is to be an artist. It's very hard to be a good one, but it's easy to be one. Children understand that,” says Done. “I am not as good as a five year old. I would love at the end of my life to be able to bring back that absolute freshness that you have when you’re of that age. I can beat most eight or nine year olds, but I cannot beat a five year old.”

If you are alive in Australia today, you have no doubt seen Ken Done’s signature style splashed across a tea towel or one of your mum’s favourite chunky jumpers from the ’80s. His bold use of colour and simple, optimistic imagery of iconic Australian landmarks, animals and landscapes has been instrumental in forming Australia’s, and more specifically Sydney’s, identity on the world stage. Photograph: Katje Ford | Ken Done in his studio in the Rocks

While his design work remains a ubiquitous presence and an enduring international business, Done’s true passion is painting. Upon meeting the artist in the tiny paint-splattered studio out the back of his gallery in the Rocks, it is evident that along with his lust for his work, the 81 year old’s love for his enduring muse, Sydney, has also not dulled since he held his first solo exhibition in the city in 1980. Both of these passions are being showcased in the major artwork he is contributing to Vivid Sydney’s biggest ever festival of lights in 2022.

“This is the first time I've been asked to do a Vivid performance, and I'm absolutely thrilled to be doing it. The whole piece is called For Sydney with Love, and essentially, that's what it's about, paintings that I've done over the years about Sydney and what I feel about Sydney,” says Done.

The artist and his family have been working with creative agency Spinifex Group to digitise his work into a large-scale animated presentation that will take over the Customs House building at Circular Quay. It begins with Done’s arm appearing to reach across the building’s facade (“so you see my scrawny old arm and paint sticks outlining Customs House”) before drifting and transforming into a series of moving paintings, including a lot of the work he created for the Sydney 2000 Olympic Games, set to the music of Australian jazz musician James Morrison. 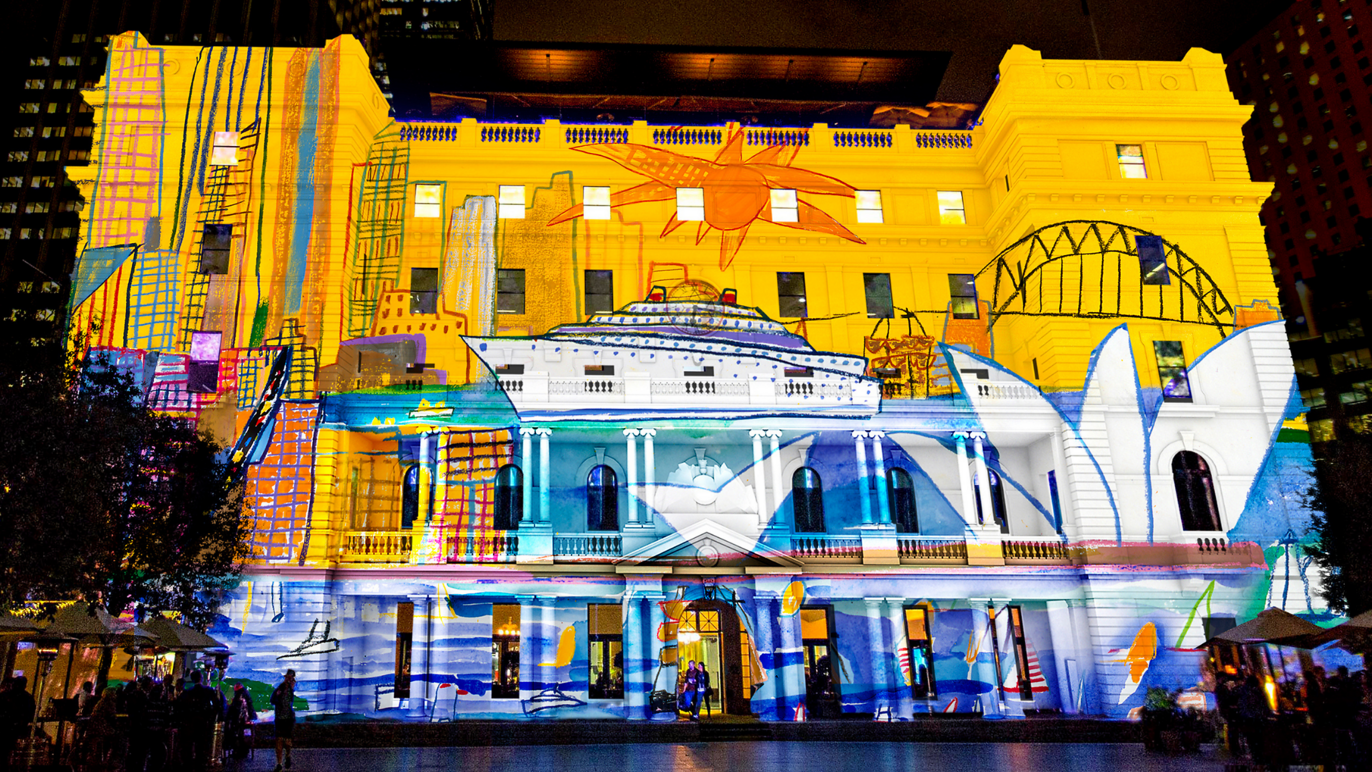 Reflecting on what first sparked his affectionate, abstract imagery of local landmarks, he says: “It's interesting to me that the Harbour Bridge also looks like Uluru. And the Opera House looks a bit like the Bungle Bungles. These symbols of Australia have some remarkable relationships, and I wanted people to love them.” He laughs, and adds: “I wanted people to love them so much they paid for them.”

Not that money is the motivation nowadays. Done says he will be donating his artist fee from Vivid to charities, including UNICEF, for which he has been a goodwill ambassador for the past 30 years.

For fellow Sydney artist Ramesh Mario Nithiyendran, there are striking similarities and deep contrasts between his work and Done’s. With a similar yen for bold colours and abstracted forms as Done, Nithiyendran’s irreverent ceramic sculptures have become a familiar sight in the Australian contemporary art landscape. The Sri-Lankan born artist’s work draws on his training as a painter and his interest in South Asian forms and imagery as well as politics relating to idolatry, the monument, gender, race and religiosity. While Done is inspired by Sydney’s natural beauty, Nithiyendran’s ideal experiences of Sydney are more around food and culture and less about “rock climbing and bushwalking”. He says: “I'm the kind of person where I like the hole-in-the-wall takeouts, but I also like the fine dining. I'm very happy to drive to Flemington and get Sri Lankan takeout and sit in the car park, but I'm also happy to go to you know, Hubert, and listen to jazz and have nice buttery food.”

For Vivid, Nithiyendran is presenting Earth Deities, a seven-metre-tall, hand-painted, multi-limbed sculpture with four faces, 98 lighting channels and smoke machines that towers over a corner of Hickson Road Reserve.

When visiting the artist at his studio – a warehouse crammed with colourful sculptures in various states of completion and a pair of warm kilns, sandwiched in a nondescript industrial area in Gladesville – he takes to scribbling up a diagram with pen and paper to describe his new project.

“...So Hickson Road Reserve, for example, is flanked by three Sydney icons: the Opera House, the Harbour Bridge, and Luna Park. So you have a direct sight to those three iconographies …So I wanted to create a dialogue around what an iconic figurative sculpture could be in a place like Sydney. And I think Vivid is a really good situation to explore those ideas because the audience is so porous. It's a festival context, rather than a gallery, or a museum context, which might engage a specific kind of audience or channel a specific kind of history,” says Nithiyendran.

He adds: “I really wanted to think about how we could think about multiplicity and plurality in a singular form. What makes Sydney so special to me is the diversity of culture that exists – in food, music, place, cultures, migrants. That's what I wanted to highlight in a non-didactic way.” Nithiyendran moved to Auburn as a one-year-old with his parents who came here as refugees, and he says his heart remains in Western Sydney. To present a work at Vivid has a special significance for him: “Lots of my family, well, they don’t go to galleries or museums, but they all know about Vivid, it's in their cultural imagination.” He laughs: “My solo at the National Gallery? Eh. Vivid? Wow!”

Nithiyendran and Done’s contributions to Vivid are a perfect example of the new direction recently appointed festival director Gill Minervi is pushing for.

“I'm interested in Vivid as an event, but I never really saw myself as an artist who maybe could present work in that scenario. Just because I think I have a reputation for having, you know, subversive work, or edgy work or work that might be challenging. I think people are confused sometimes as to why a work that looks like this might be in this context… Vivid hasn't been on for the last two years, so I think it’s a pretty good opportunity to reimagine.”

Vivid Sydney runs from May 27 to June 18. Check out 10 reasons why Vivid Sydney 2022 will be unlike any before it.