Garth Knight: Tension (Between Being Constrained and Being Connected) 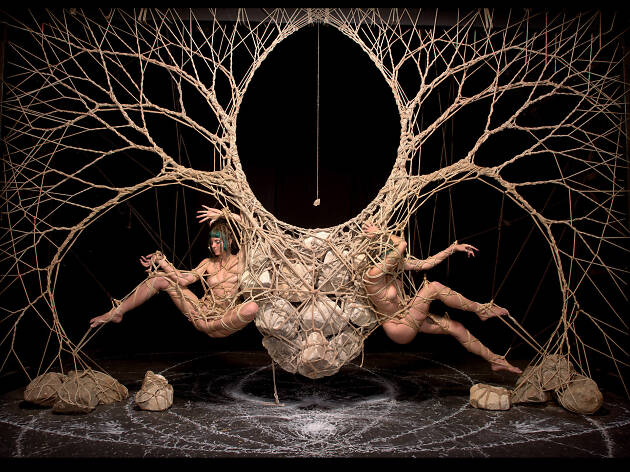 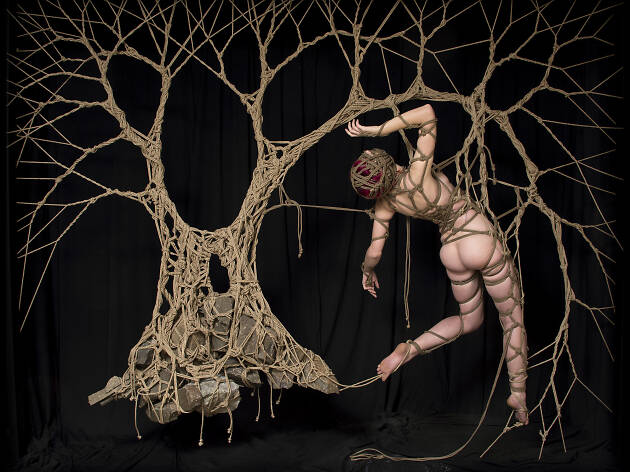 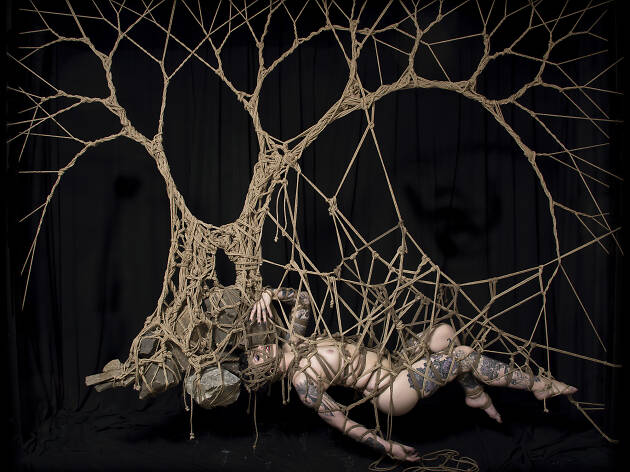 Naked within a huge, intricate web, a human body hangs suspended. About this chrysalis, latent with becoming, a druid-like figure moves. Tenderly, he works his subject deeper into the knots. The taut pull of the rope visibly presses on skin. A dark energy pulsates, as the strain of this endeavour is clear in both the consenting subject and artist, who must delicately balance the role of guardian and master creator.

Contradictions of power are at the heart of Garth Knight's practice, the shamanic craftsman behind a new exhibition at 107 Projects in Redfern. Recently presenting at the 2018 Festival of Dangerous Ideas on Cockatoo Island and the Edinburgh Fringe Festival, Tension (Between Being Constrained and Being Connected) encompasses photography, video installation and three live performances up until the end of March, with a live soundscape by Johnny Seymour.

"When I saw someone being bound for the first time 19 years ago I had an immediate and visceral reaction," Knight tells Time Out; "an attraction toward the aesthetic beauty of rope on flesh as well as the incredibly poignant almost paradoxical things that it represented – constraint and freedom, power and care, contrasting ideas of strength and pleasure with those of surrender and abandonment."

So began his career as a rope bondage artist.

Originally, Knight built these sculptures in private spaces – in his old St Peters studio, or a friend's soon-to-be-demolished apartment. A photograph of the finished piece was the end goal. Yet, while his photography work continues, he realised the real magic was in the process.

Creation had a "profound ability to affect and influence emotional states, both for myself and the people I was working with," Knight says. Though he admits that performance does not come naturally to him, he decided to invite the public in to witness these tableaus taking shape.

Building the foundation structure of stone and hemp can take anywhere from days to months, Knight says. Rarely does he have a clear vision of what he will ultimately conjure into life. Receiving "flashes" of what the final piece may look like in the period leading up, when he begins, he works intuitively, responding to the space and its contained elements. During a performance, says Knight, he will enter a trance-like state of profound focus and concentration.

"I am always surprising myself with what actually happens in the end."

But who are these people, willing to put themselves in a position of extreme vulnerability to endure an undeniable degree of physical and psychological discomfort? Some are friends, Garth tells me; but more often they are individuals who have come across his work serendipitously and want to explore the same ideas. At Tension, there are two collaborators to be entwined: Sydney performance artists Paloma Negra and the Queen of Flesh.

"I’m still not sure how particular people come into my life," says Knight. "But they always come with a reason."

While he has no qualms about the structure failing – Knight was a trained engineer in a previous life – he is highly sensitive to the profound trust and care that is embedded into each work.

"People's limits are always discussed beforehand," he says. "I always check in with them during the performance, and we have signals and methods for communicating that things are okay."

"One of the most interesting and exciting things about these performances, and bondage play in general, is the power exchange and the giving and receiving of responsibility for someone," Knight continues. "It is understood however, beyond question, that this is done with consent and this control at any time may be returned."

Following his Sydney exhibition, Knight's next commissioned piece – an installation and performance – will be touring Australia with the Tamworth Textiles Triennial in 2020. In the meantime, he is seeking unusual places about the world where he can continue producing photographic series and showcasing new, ephemeral, captivating installations.

Tension (Between Being Constrained and Being Connected) is showing free at 107 Projects until March 31. Performances are Saturdays from 5-7pm.