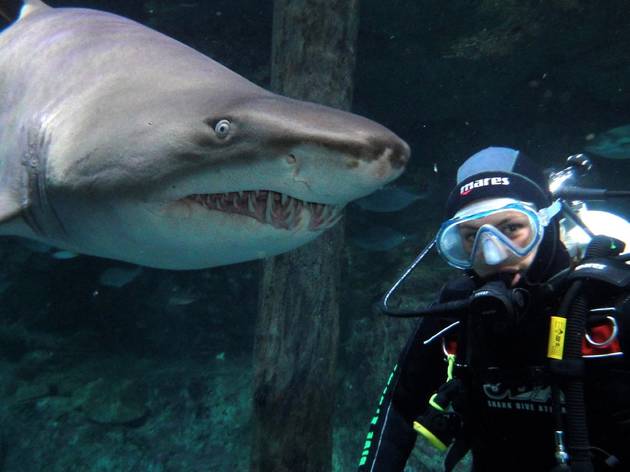 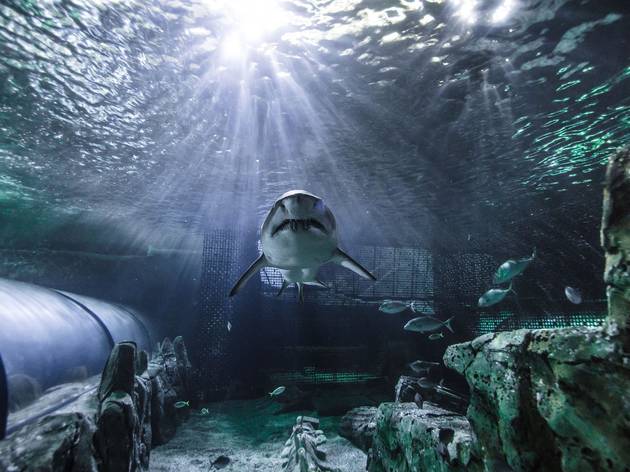 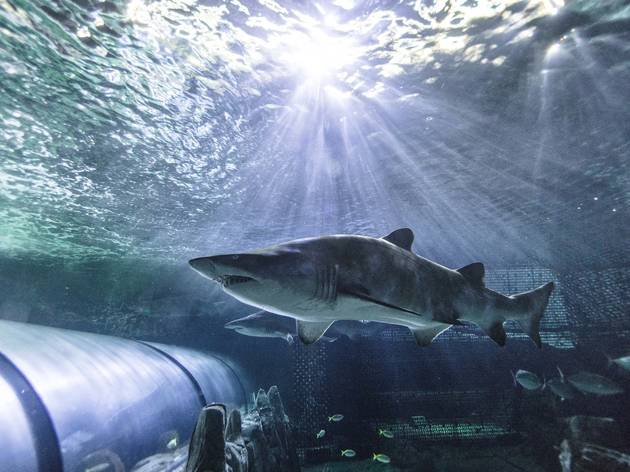 When Manly Sea Life Sanctuary closed its doors in January, three grey nurse sharks – Striker, Murdoch and Trio – were transported across to Darling Harbour to join their new mates Mary Lou and Napoleon in the oceanarium tank at Sea Life Sydney. Staff were apprehensive about the union, but the five ‘Labradors of the sea’ have made a peaceful colony in the shark tank exhibit and now, for the first time in that location, you can join them in their captive habitat on a 30-minute diving experience.

Brett Fairhurst, our diving instructor at Shark Dive Xtreme – the only cageless shark diving experience in Sydney – calms our nerves by letting us know the toothy grey nurse sharks prefer to chomp on bony fish and squid rather than tough, wetsuit covered humans.

“Those grey nurse sharks go through anywhere between 30-40,000 teeth in their lifespan,” he says. “They’re constantly losing them so you find them all over the floor. The sharks tend to swim in a pattern, so once you get to know the different animals you get a feel for where they like to swim and you can put customers in positions where they’ll get lots of interaction.”

Though the grey nurse sharks range from one to three metres long in the tank, they’re placid creatures and do very little other than give you a curious side eye as they swim by. The biggest benefit of diving with them at the aquarium, rather than in the open ocean, is the guarantee of seeing so many sharks in one spot. “It’s really good for a first-time diver too,” says Fairhurst, “It’s quite controlled, shallow and a great introduction to scuba diving.”

The diving instructors spend around 1.5 hours going over a medical assessment, showing you a safety video and training you on the equipment. Once suited up, we practice removing our regulators and clearing our face masks – all on a submerged platform above the sharks. As the experience is open to anyone fit and capable of diving, regardless of experience, they’re keen to make sure you know the basics of scuba safety.

Once we’re on the oceanarium floor, we’re amazed by the size of the smooth rays, sea turtle and giant Queensland groper swimming around our heads. It’s also fun to wave at all the school kids as they wander through the tunnel walkway underneath you.

Two female rays were brought over to Sea Life Sydney from the Manly facility. Big Mouth is considered to be the largest and oldest smooth ray in human care in the world; she’s around 50 years old, 350 kilos and the diameter of a queen-size mattress. Stumpy, whose tail was chopped off by fishermen, can no longer return to the wild as she has no defence mechanisms without her stinging barb: “She’s just a big swimming pancake.”

“Aside from the whitetip reef sharks and the Queensland groper, pretty much everything that’s in that tank you can find in Sydney Harbour,” says Fairhurst. “The spotted eagle rays that you saw you won’t really find this far south, but we do have southern eagle rays which are similar with a shorter tail, no spots and a brown colour.”

Though the funny looking Wobbegong sharks and lazy Port Jackson sharks added to the diversity in the tank, for us the real treat was getting close to Myrtle, a rescue turtle that used to live at Manly Sea Life Sanctuary after her carapace was smashed by a boat propeller.

“She swims on an angle with her bum in the air, and that’s because she’s got air bubbles trapped under her shell and her buoyancy is messed up. Staff at Manly occasionally strapped weights to her shell to help her swim more comfortably, but it’s an ongoing process – she could never been released into the wild as she’d float away.”

Shark Dive Xtreme costs $299 per person and the experience is open from April 28.