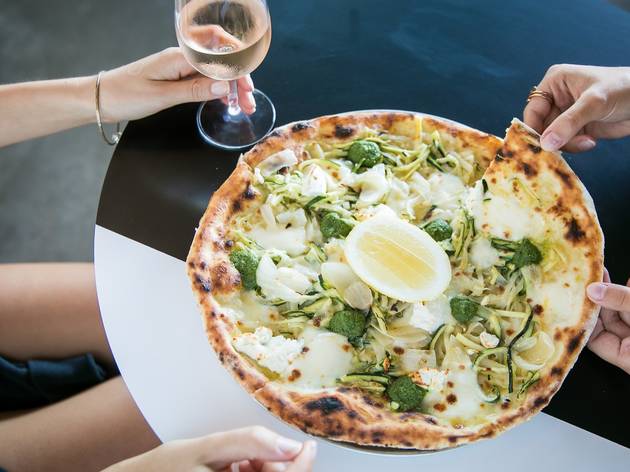 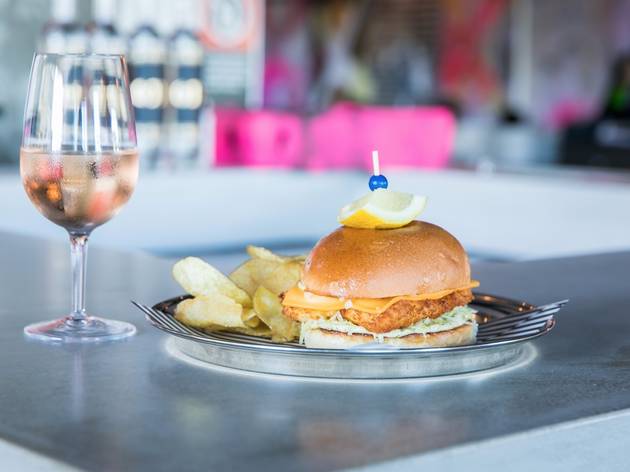 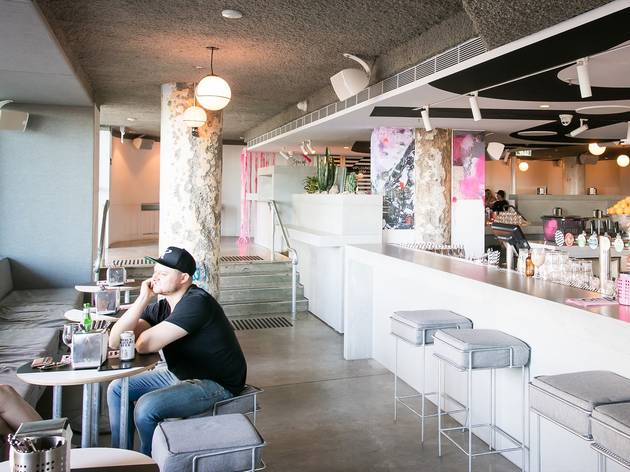 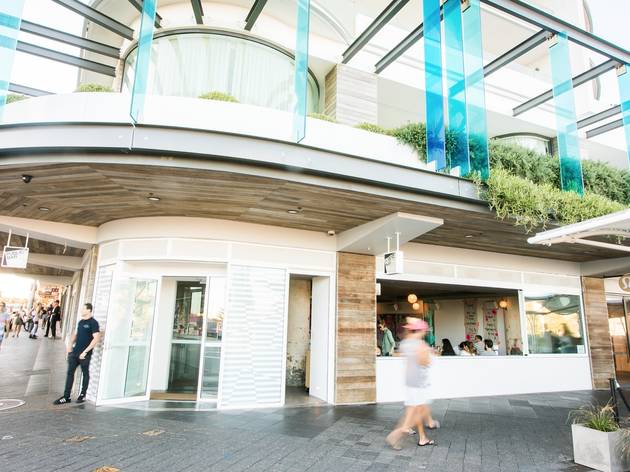 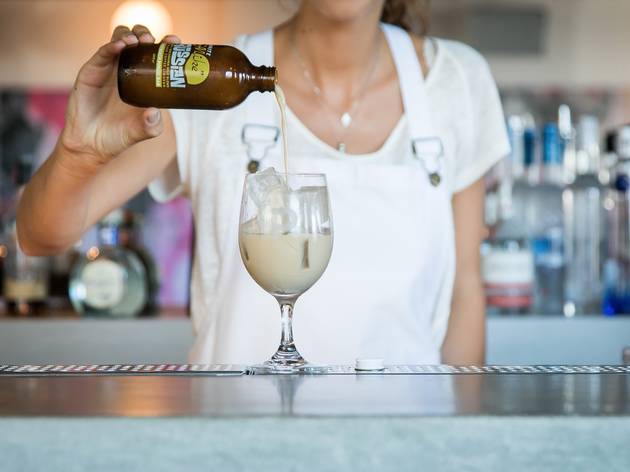 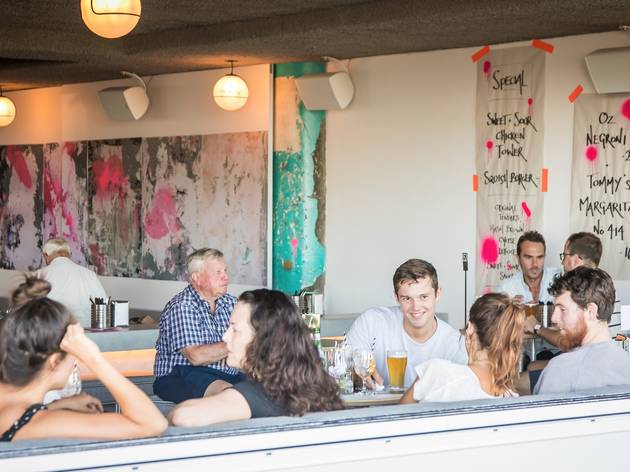 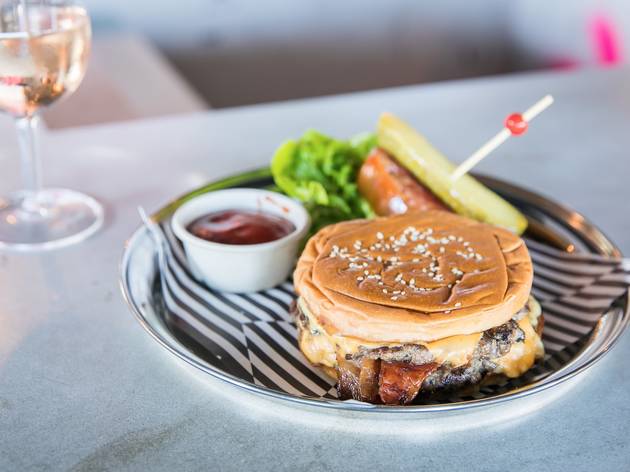 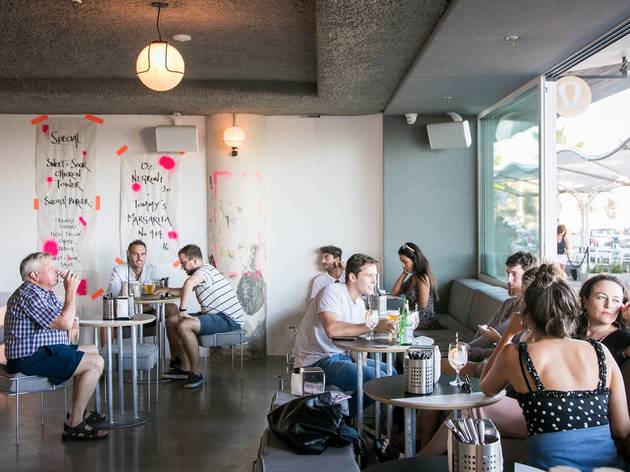 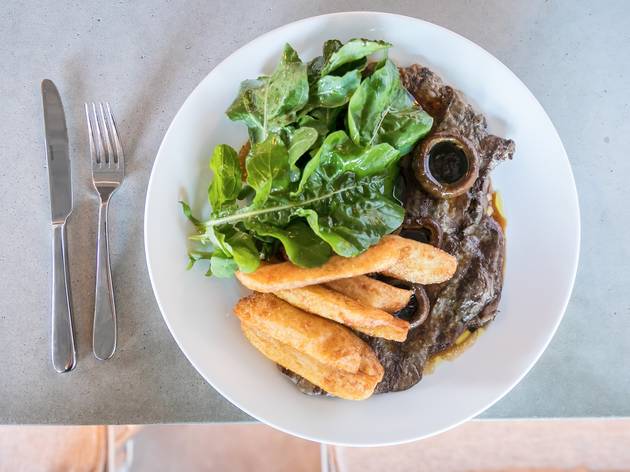 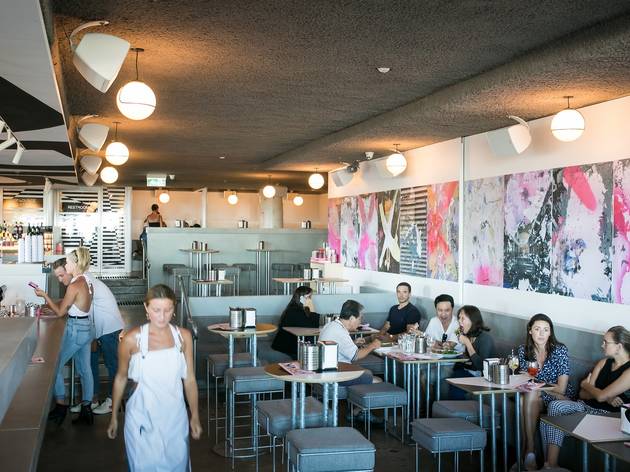 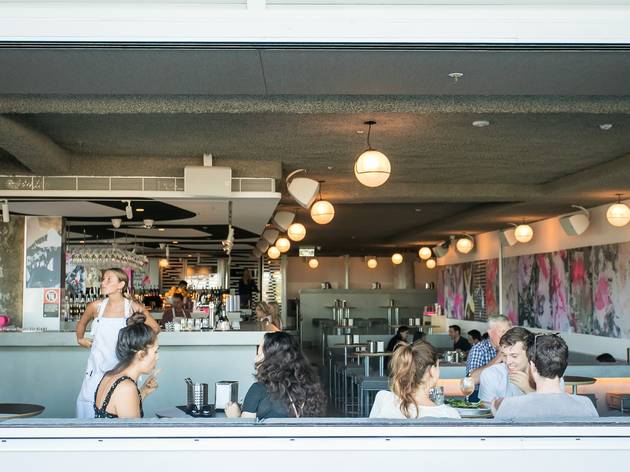 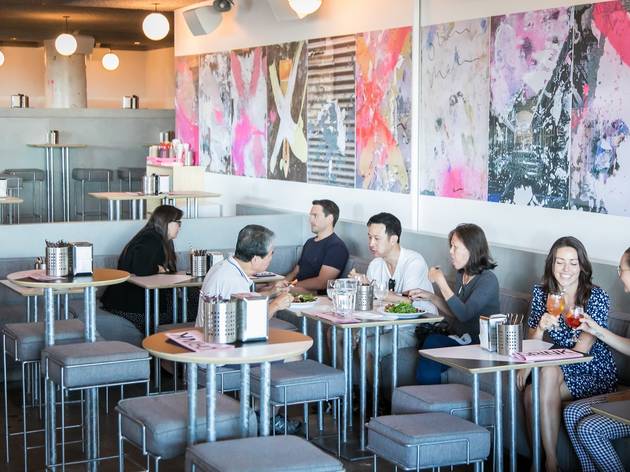 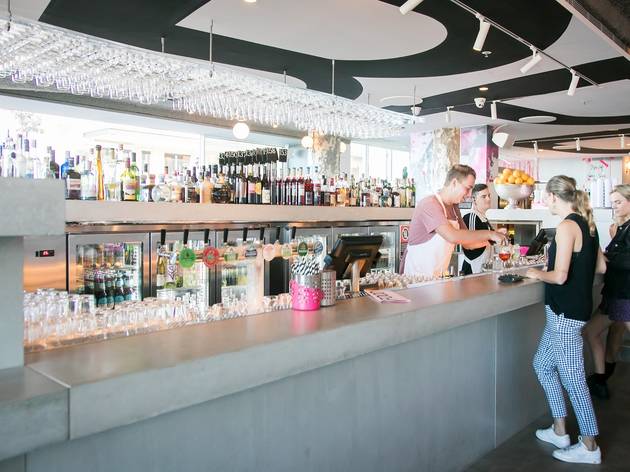 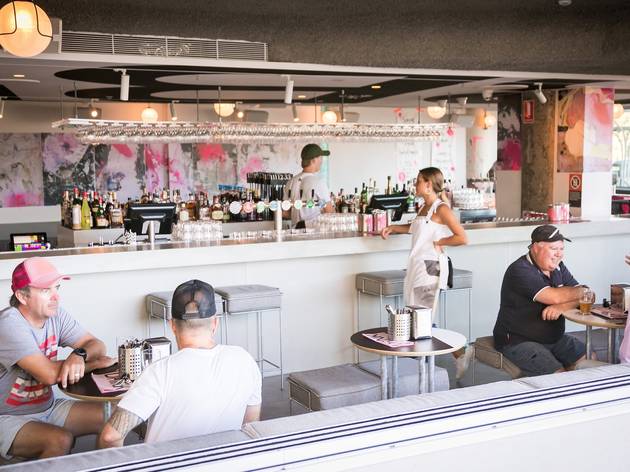 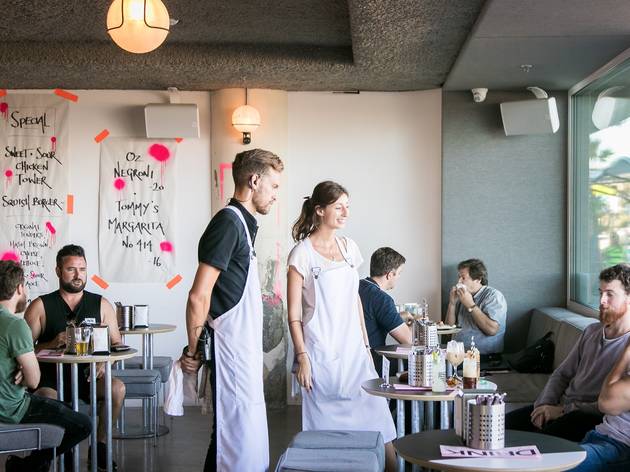 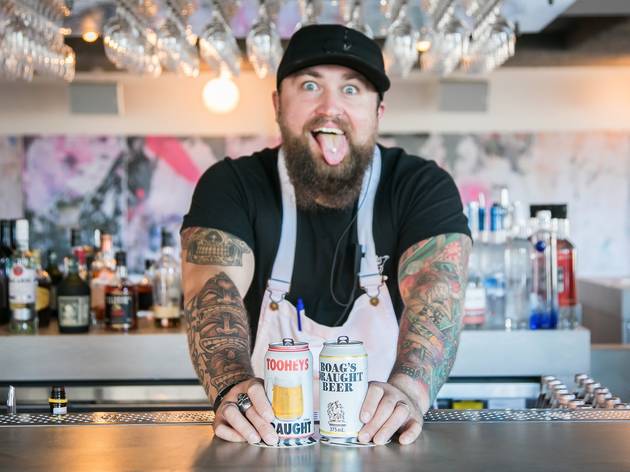 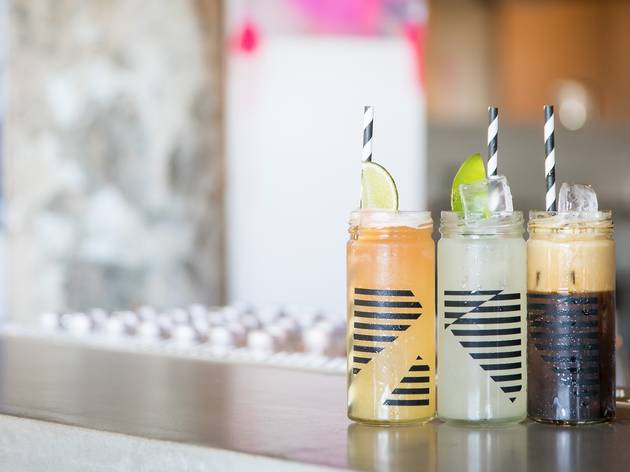 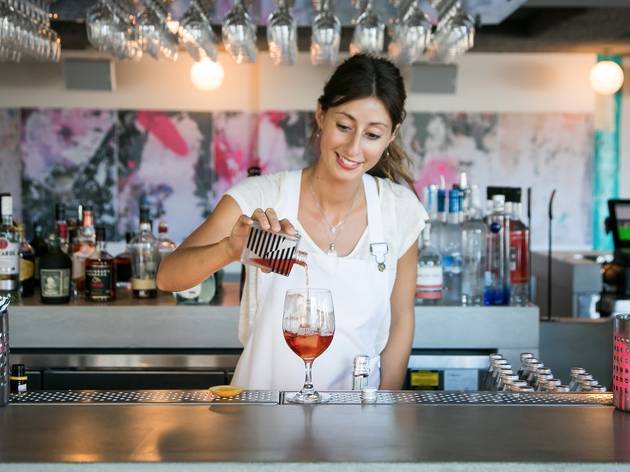 Maurice Tenzini and Monty Koludrovic have reinvented the beachside pub

Update: Public Bar opened up again in June, offering 50 per cent off food and drinks throughout the month. Now, that's been extended through the whole of July, too. Grab your $10 burgers, $10 espresso martinis, $5 tacos and $5 wines (and so much more).

Even Bondi people are calling Bondi Beach Public Bar ‘very Bondi’. Maybe it’s the macadamia milk cocktails; or that it’s next to Lululemon and a stone’s throw from the aquamarine waters of the beach. Or it could be the fact that it’s from the team behind Icebergs and Da Orazio. But crisp white shirts and activewear aside, at its heart it’s really just a pub.

BBPB sits on the mostly-toursity section of Campbell Parade, which hasn’t seen much in the way of good bars since White Revolver and Buckler’s Canteen (Vale). And so it’s not surprising that on a balmy Friday night it’s a total scene, making it a bit of a trick to get a table. Wait to nab a spot on the promenade – this is your best bet when it’s busy as the turnover is quicker than big boozing groups inside. But here’s the rub: inside you order at the bar, but you can’t take your drinks with you to the outside tables: it’s a whole different ordering system and they deliver the drinks to you. It weirdly divides the venue. They’re kinks that the uninitiated (staff and punters) have still to figure out, but hopefully with time the flow of the venue will organically settle in.

You want the double squish burger. What seems like a gimmick is actually a pretty genius idea. The usually fluffy bun is compressed down (a heated iron weight is responsible), toasting the outside nicely and soaking up the juices of the double meat patty, bacon and cheese. This results in a surprisingly neat and compact burger holding in all the flavours in a no mess package. Another gussied up counter classic is the minute steak, charbroiled perfectly on the outside and just pink in the middle. And the chips are some of the best we’ve had in a while. Pizzas here aren’t Napoli-style woodfired numbers (head to Da Orazio for that), but they’re still good – the Mr Presto is a smart combo of thinly sliced zucchini, potato and onion doused with an ultra fresh green pesto. And the fish burger is a cracker.

The space is curated thoughtfully  – it’s got a Terzini stamped all over it from staff wearing white overall aprons that feel very 10 Pieces to bottles of his own gin lined up on the bar. Right now on the walls you’ll find colourful paste up artworks by Matthew Bax (who also owns Melbourne’s Bar Americano) – and art is set to change regularly. It’s a relatively barebones room with splashes of neon pink and turquoise, and hand scrawled menus to brighten things up. An excellent playlist from Picnic’s Kali navigates surf and punk rock, which softens the vibe, and yet you can easily carry on a conversation in spite of sitting in what is ostensibly a concrete bunker.

Try a BBPB Spritz, an Italiano-Aussie match made in heaven with Cappelletti Vino Apertivo and and prosecco. There are also pre-batched cocktails, like the White Mike Russian. Stay with us. Nut milk replaces dairy in the mix of vodka and Mr Black coffee liqueur for caffeinated sweetness. Your first sip will be confusing, but you’ll keep going back for more.

The flow of the space is the only real sticking point. Virtually everyone is seated and the narrow channel along the bar fills up quickly with people waiting to order so there’s no real room for lingering or mingling like a traditional pub. The best strategy is to pile in early, hold your table as long as you can, and appreciate the Bondi bubble from inside it’s core.