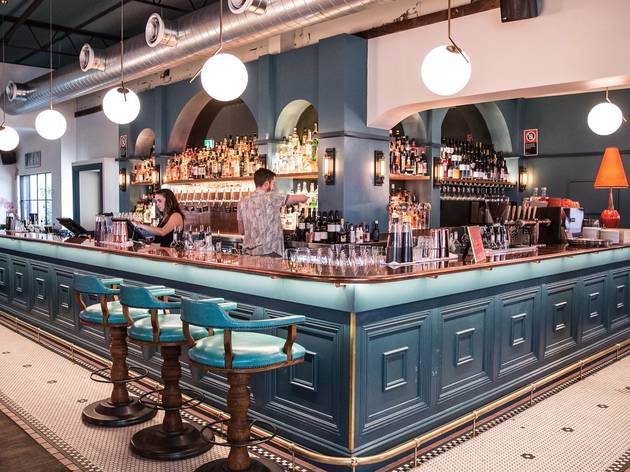 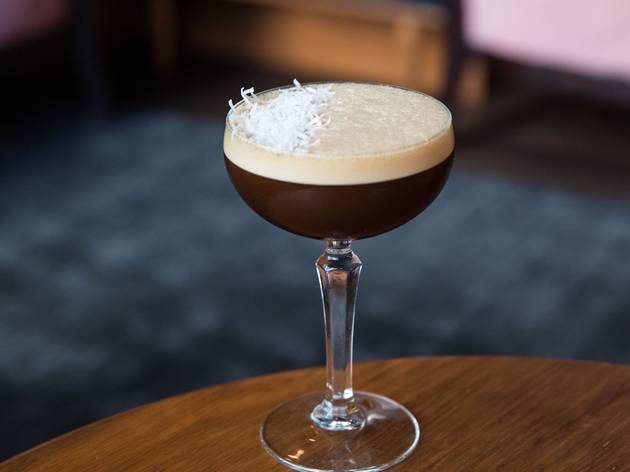 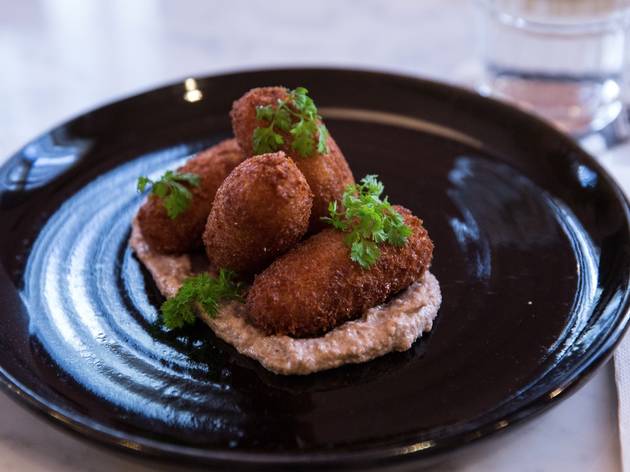 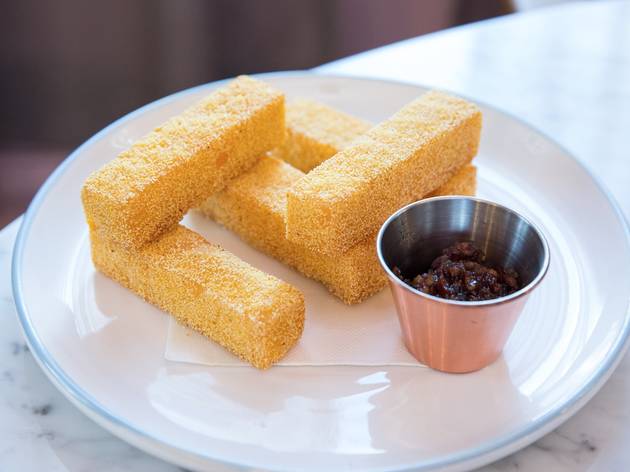 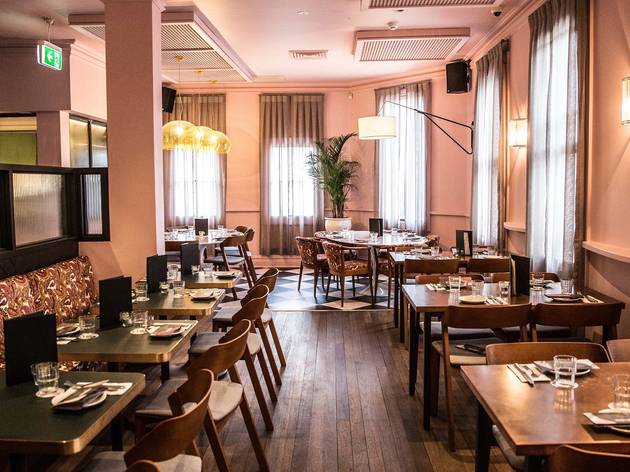 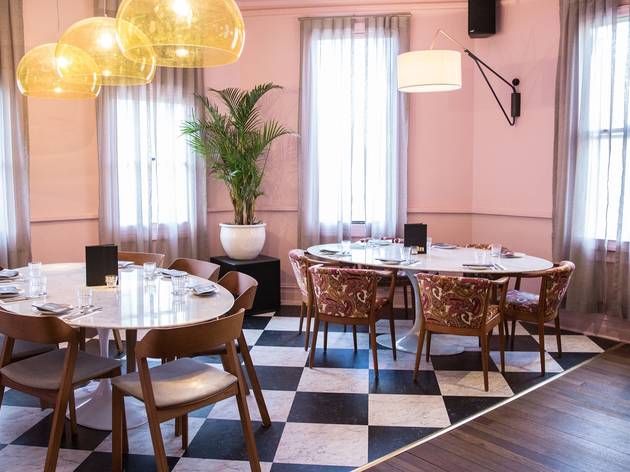 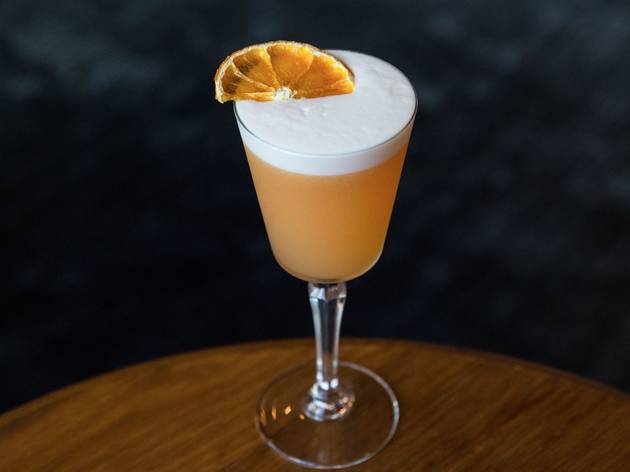 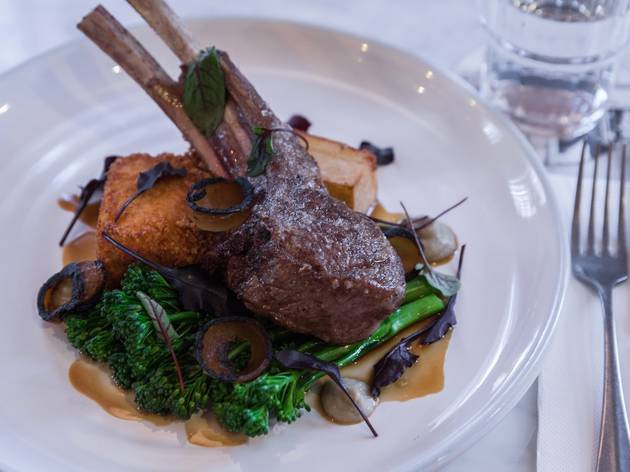 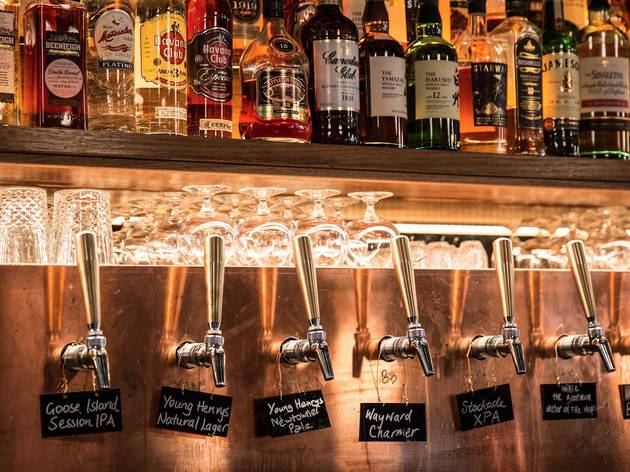 Is this glossy bar a good fit for Redfern?

Before you ask, this shiny Redfern bar has no connection to the progenitors of Americana punk, but instead to the proclaimed ‘misfits’ of the silver screens and radio waves. You’ll find them under your drinks (Debbie Harry and AC/DC adorn the coasters), printed three-metres-high on the stairwell (there’s a cute portrait of Twiggy that greets you on arrival) and on glossy wall-mounted TV (playing clips from Willy Wonka and 007 films). To be honest, we wouldn’t call these guys misfits by any means, and that’s the first thing that doesn’t quite gel about this second level restaurant-bar.

Taking over a disused space is one of Misfits’ few firm steps in the right direction – previously it was home to Mr Mary’s, a dilapidated, pokie-filled boozer. Now, in its place you’ll find saccharine-sweet cocktails, Chaka Kahn on the stereo and and lots of pink neon. The interiors are sassy and pretty – paisley booths, gold brass tables, teal velvet stools and palm frond patterns galore. You can sit in the main bar or book a table in the dining room. You’ll also find a ‘secret’ room with a bookshelf for a door – it’s a fun touch, although waiters going in and out spoil the surprise somewhat.

At the bar, Espresso Martinis come three ways: with vodka and caramel, Cognac, or coconut and rum. The coconut and classic iterations land on the side of too sweet, and we’re missing the jolt of caffeine in both. The Negroni Session turns a classic into a confused beer Spritzer – while we’re usually all for playing with old favourites, adding an IPA to a stirred-down cocktail isn’t the answer.

Thankfully, what’s on the plate here often surpasses what’s in the cocktail shakers. Neatly stacked polenta blocks hold a gentle blue cheese flavour within its square walls. The sweet’n’salty bacon jam that accompanies it makes for a decent dip – we just wish there was a lot more.

Steak tartare is missing the necessary structural elements of acidity and salt, and the meatiness of the diced steak is overpowered by a heavy-handed lug of nutty oil. Duck croquettes mirror the crisp-on-the-outside, soft-in-the-middle mix of the polenta chips, but the taste is all tattie, no quacky. But the mini rack of roast lamb is treated with a bit more love. It comes properly seasoned, cooked pink, and goes down nicely with the malbec on a cool Saturday evening.

They’re kicking a few goals on the food and wine front but Misfits is not operating at quite the standard we have come to expect from Redfern-Surry Hills-Eveleigh. There’s nothing wrong with a glossy, LA-pink kind of bar, but in a town like Sydney you’ve got an audience that knows their drinks all too well. If you’re opening in Redfern you need to bring your A-game, or you might not fit in.