Bars Bondi Beach
3 out of 5 stars 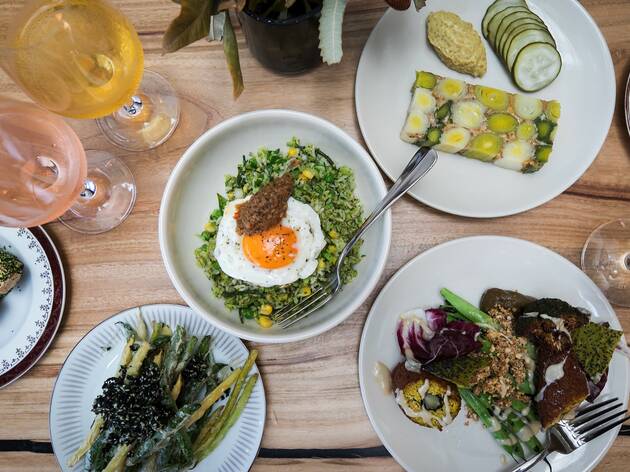 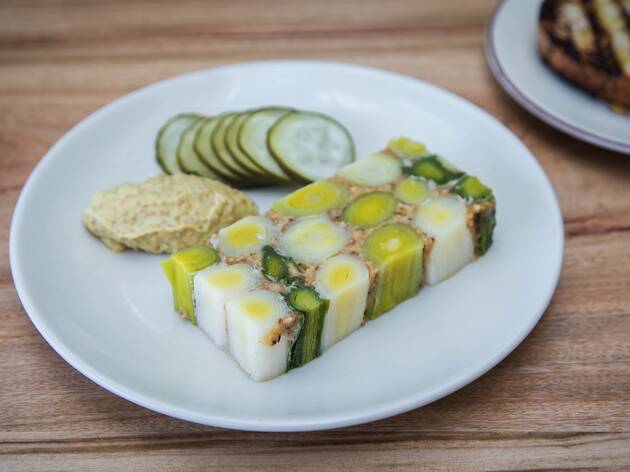 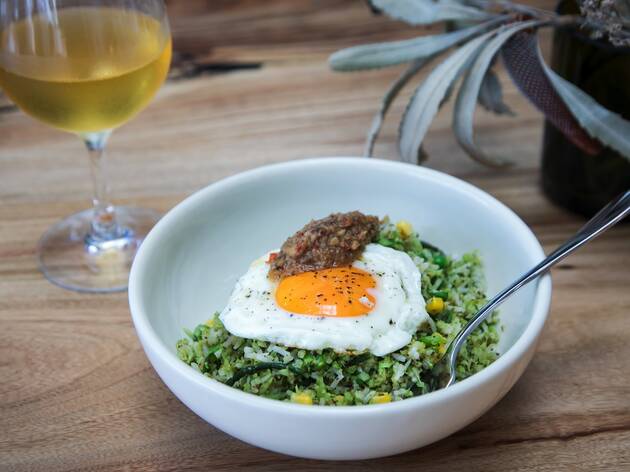 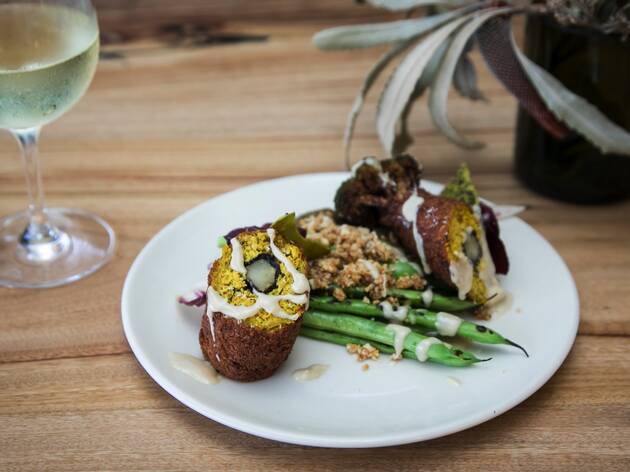 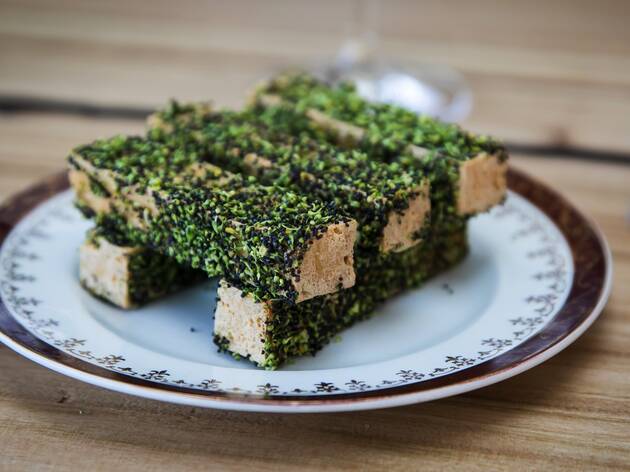 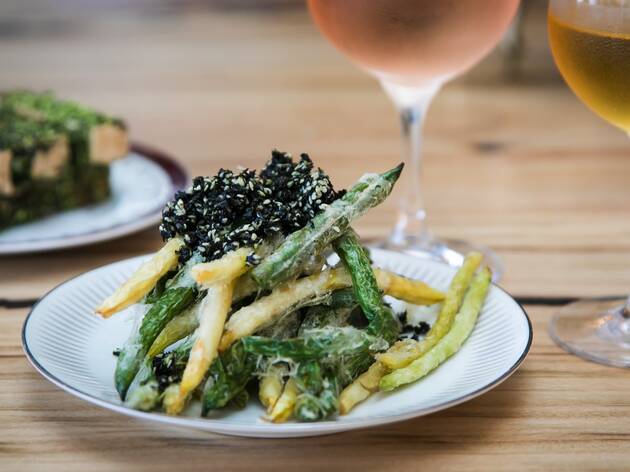 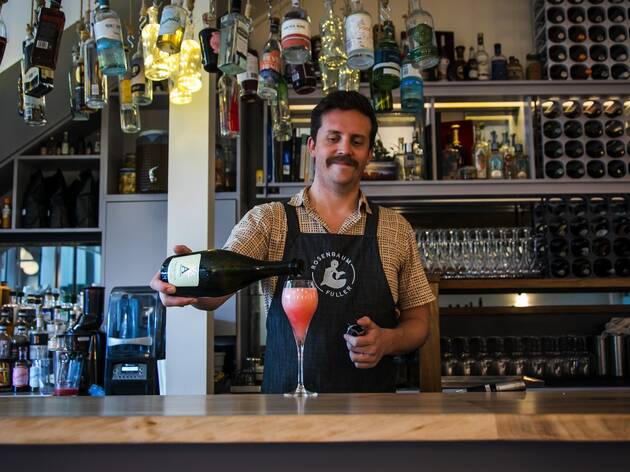 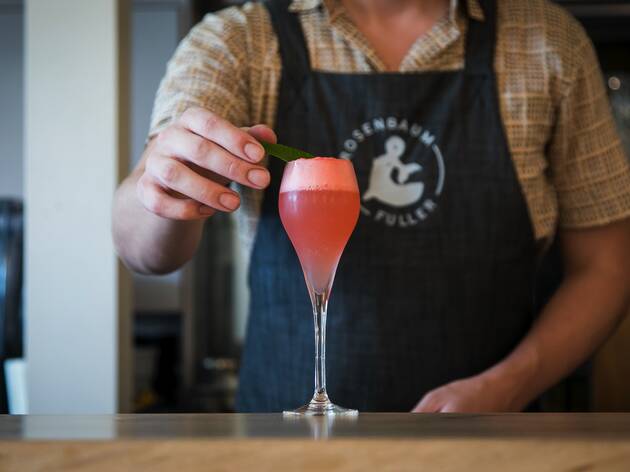 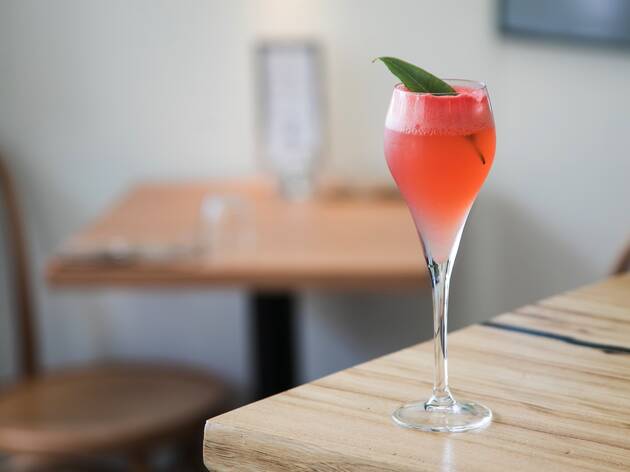 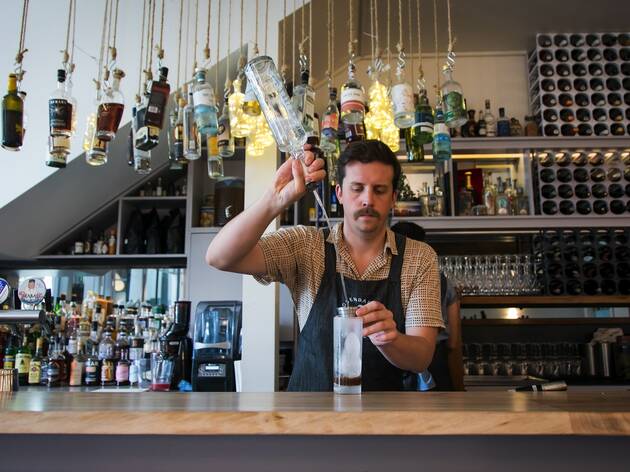 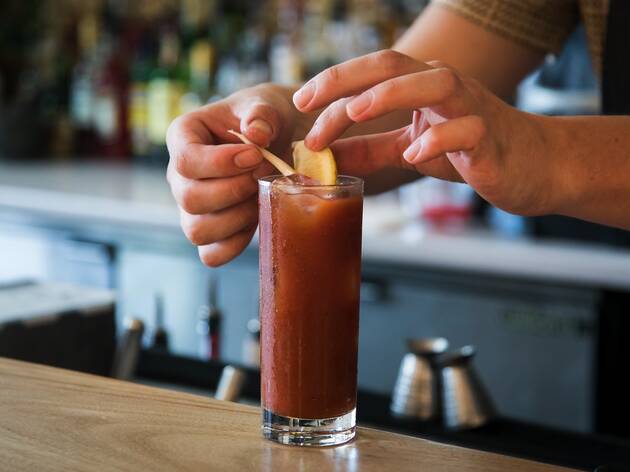 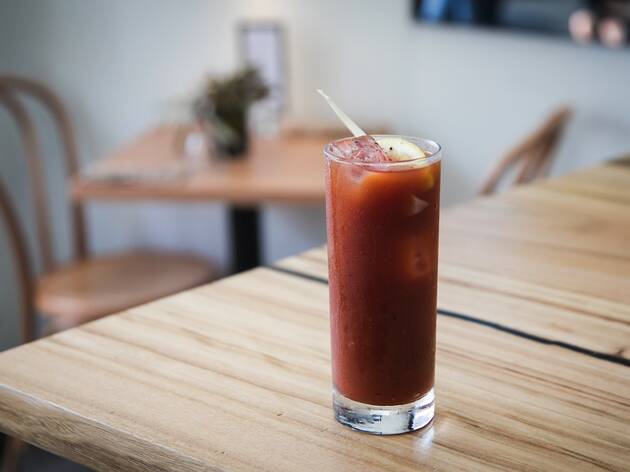 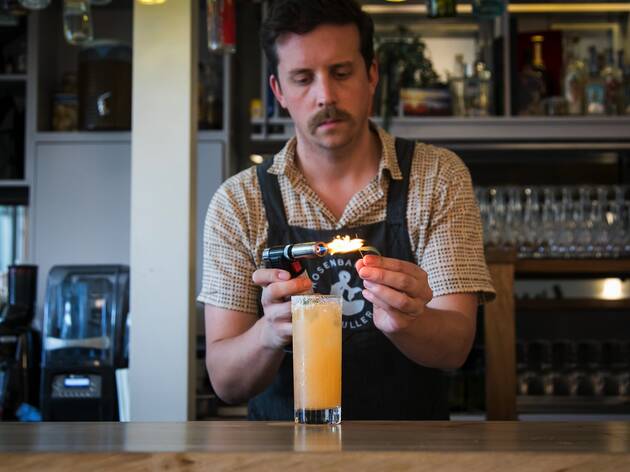 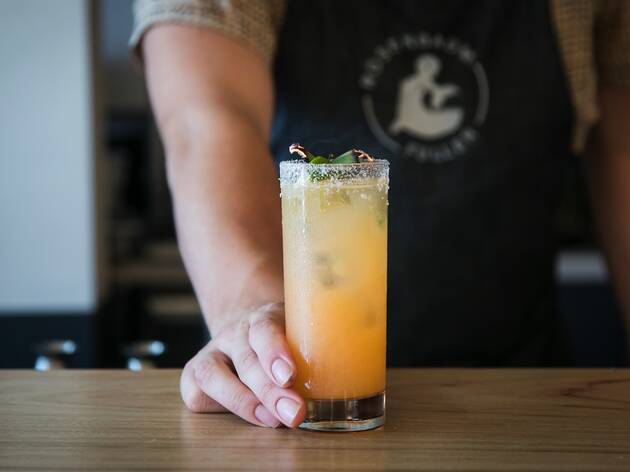 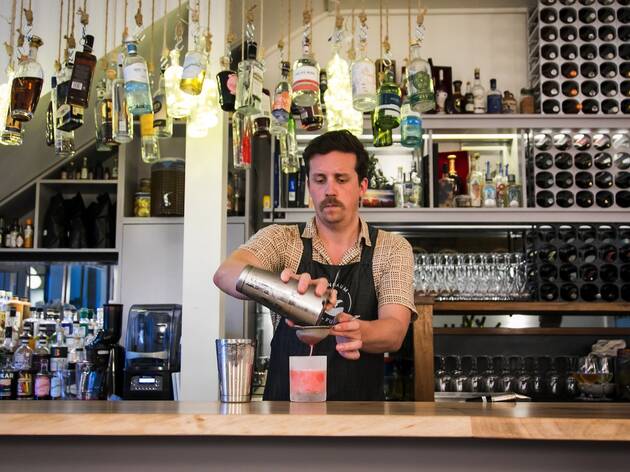 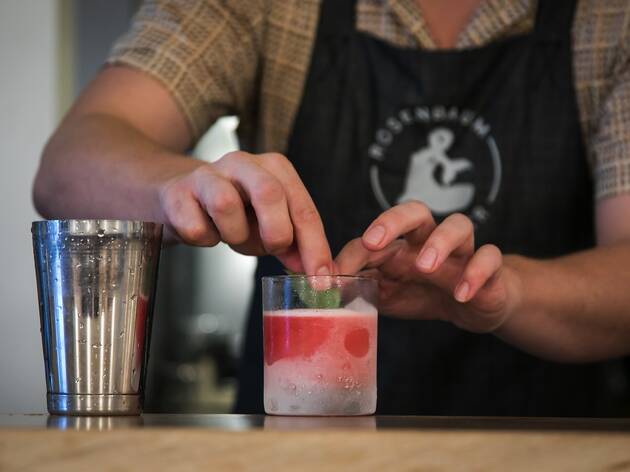 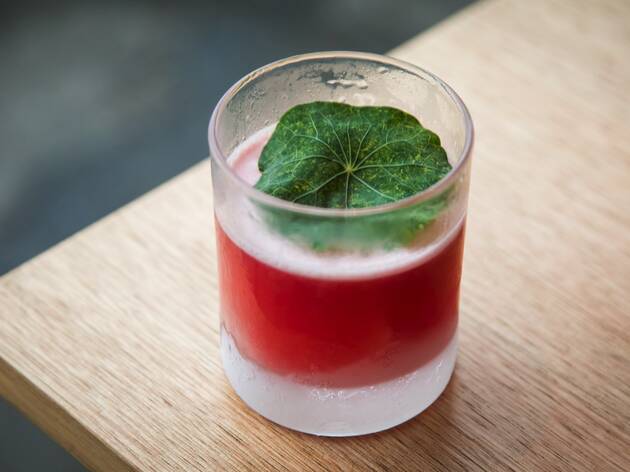 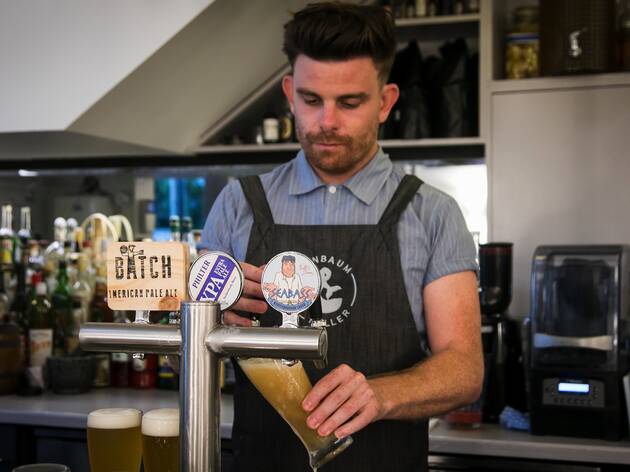 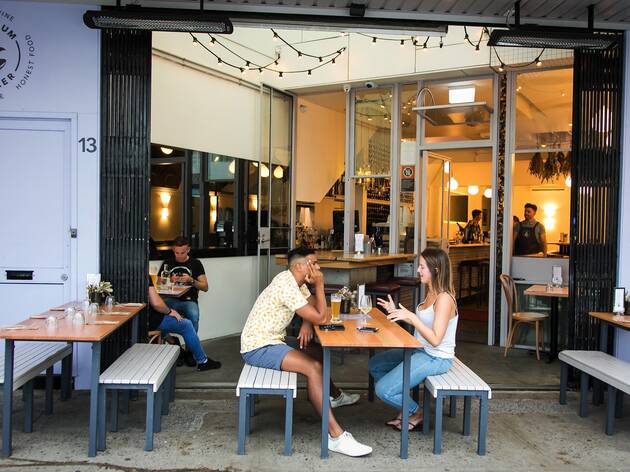 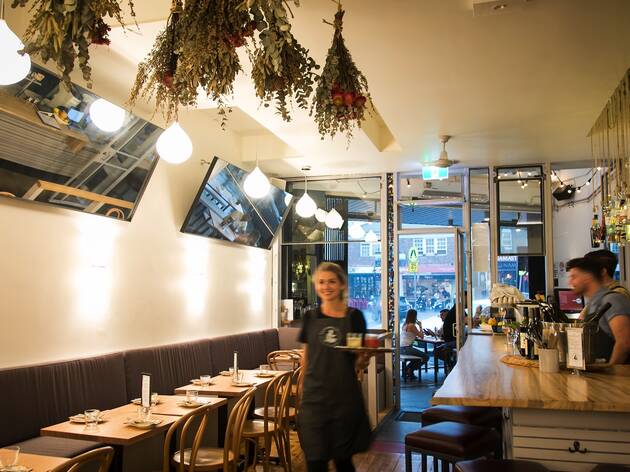 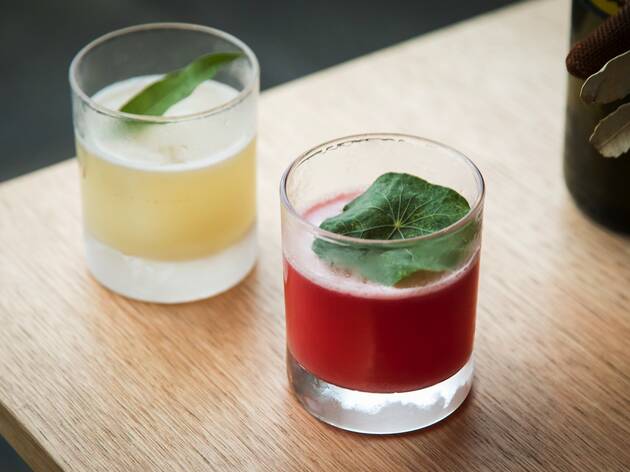 Living Coral is the Pantone Colour of the year for 2019, so you can expect to see this vibrant orange-red colour splashed across walls, advertising campaigns and interior mags very soon. But first, try it in liquid-form at Rosenbaum and Fuller, a fresh day-to-night spot in Bondi located near Bondi’s Six Ways just back from Hall Street. Formerly the Cross Eatery, this Bondi café-bar is dishing out vegetarian-focused plates and well-made drinks by Lee Potter Cavanagh, who headed up Victoria Room when it was in its cocktail-shaking heyday.

Back to that tasty Pantone-coloured cocktail – it’s on-trend in colour, but more importantly, delicious to drink. The grapefruit juice-based tipple is stirred down instead of fizzy, bitter rather than sweet (courtesy of a slug of Australian-made Okar amaro) and garnished with pennywort (a round, mustard-flavoured leaf you’ll have spotted growing in coastal areas). In other words, it's best enjoyed to a soundtrack of the Isley Brothers and Bob Marley, perched at one of the sidewalk tables on a Saturday evening, when Six Ways is at its buzziest.

Order some snacks to go with your people watching. Oysters may trick you into thinking this is a seafood joint ­– in fact it’s mostly plant-based aside from those molluscs. Dive into puffy golden Iggy’s rolls, which come served with butter, whose ‘secret’ ingredient is a hint of Vegemite. It’s a prime brekky-by-night starting point.

A terrine (which is a compressed, cool veggie slice) takes the layered farmhouse dish and gives it a vegan makeover, but leek’s famed fibrousness means it’s not quite as spreadable as the OG. That’s where sweet cashew butter and seeded mustard step in. Going in blind here might result in some confusion when the core of your schnitty is eggplant – they don’t labour the plant-based ethos from the get-go so it might catch you by surprise until you get into the swing of the menu.

We like their “food is for everyone” attitude, and it’s a beautiful space to spend time. There’s plenty of blonde wood; fun, colourful stained glass windows; and bottles of spirits suspended from the roof by ropes and hooks. And here is where Rosenbaum's USP really kicks in. Those spirits are staunchly local and keeping the drinks all Aussie is a core part of the directive. Bondi locals are fiercely loyal to their home turf,  so promoting spirits from across Australian instead of across the globe is a smart move. Work your way across the country, starting in Sydney with Archie Rose and Poor Toms gin, then move south with Sullivans Cove and Starward Whisky. Beer taps here are pouring Batch Brewing, Philter XPA and Yulli’s Seabass, which will please post-beach goers; you’ll also find a $7 happy hour, live music and a succinct Australian wine list.

Cocktail bars in Bondi are few and far between – and even though you could mistake Rosenbaum and Fuller for being a restaurant or a café, where it shines brightest is behind the bar, where the drinks are more Aussie than a Weiss bar by the beach.