Why some people are curious about sobriety in lockdown

The 'sober curious' movement has been around for several years, but as lockdown life looms large, it's having a moment in Australia

If you found that your recycling bin seemed to fill up faster than normal during Sydney’s first lockdown, you weren't alone. On refuse collection day, endless avalanches of empty bottles, stubbies and tins cascaded from yellow-topped wheelies citywide as Sydneysiders dulled their fears of anxiety-inducing headlines with several more glugs of grog than they might normally. Data released in February 2021 shows that alcohol sales jumped an unprecedented 26.5 per cent during 2020’s national shutdown, as Australians said “fuck it” to being sensible and embraced a binge-today-mea-culpa-tomorrow regime of boozing on the daily. Because if you can’t drown your sorrows while the world is ending, when can you?

Well, in Australia (and most other parts of the western world), pretty much whenever – it’s not just global health emergencies that drive us to drink. A few mimosas with brunch; a glass or several of rosé over lunch; a few beers while watching the footy; pop some bubbles for a birthday toast; aperitivo hour demands spritzes; cocktails are a must at sunset; a hard seltzer for pre-drinks; did someone say Long Island Iced Teas at the bar; and how about a few cheeky tequilas at the club? Whether we’re celebrating, commiserating or gesticulating on a dance floor, alcohol is our one collective constant. And such is this devotion to drinking, those who dare betray that culture can be treated as traitors.

“Probably one of the biggest disincentives for people thinking of drinking less is the idea of being perceived in a certain way by friends and family. No one wants to be labelled the person that's not fun, that you're somehow a bit of a killjoy,” says Rachel Voysey, principal psychologist at Sydney-based counselling practice the Relationship Room. “It’s also about how drinking becomes the foundation for many of our relationships. When people start dating, when they make friends, often drinking is part of how those bonds are forged, so not drinking can be viewed as opting out of that shared experience. ​​It is quite hard to resist that without feeling like you become the outlier in the group, which nobody wants to be."

It's not just an alcohol thing; any situation where everybody is participating in something, and you are the person who is not, is othering. But drinking is one version of this that comes up all the time. So there is a huge amount of pressure to conform.

Such is the hallowed role of alcohol in our social rituals, it’s only by ritualising restraint that we’ve been able to find the acceptable loopholes for laying off the bottle. Stop-tober, Dry July, or invoking the occasional “detox” are generally tolerated, but these are temporary hops onto the wagon – staying aboard is for buzzkills, addicts and the pregnant, right?

Perhaps not. While alcohol consumption soared during our first lockdown – the Australian Institute of Health and Welfare found that at the height of the national shutdown, in May 2020, one in five people said they were drinking more regularly – what happened after lockdown ended is even more telling. Sales data from major alcohol retailers like Dan Murphy’s and BWS reveal that purchases of low- and no-ABV alternatives skyrocketed by as much as 83 per cent in the 12 months after Australia began reopening.

This shift away from alcohol has gone hand in glove with an emergent trend in the wellness and wellbeing space: the sober curious movement. This is not so much a clearly defined methodology for non-drinkers as it is a chamelonesque thought experiment that can support a range of reasons for reducing alcohol intake. For some, it’s a philosophy developed by British writer Ruby Warrington, who first coined the term sober curious, calling for an objective audit of the role alcohol plays in day-to-day life. Its teachings have also been adopted by health and beauty influencers as a way to attract more trend-chasing followers. Either way, the central premise, regardless of how it’s eventually expressed, is the same: you don’t need to be a diagnosed alcoholic to have an unhealthy relationship with booze.

That’s not to say that addressing a casual reliance on alcohol demands you go cold turkey. Moreover, the sober curious philosophy is about remaining mindful of your intake, making empowered choices to say no to that cheeky extra glass or that ‘one for the road’. It also encourages being conscious of the positive results of cutting back on booze, using the mental feedback of feeling fitter, more alert and in better shape to keep up the motivation to moderate.

Sober curiosity is nothing new – it’s been rattling around wellness circles since 2018 – but it is having a moment in Australia right now, especially in Sydney, where drinking culture had already been in a state of flux after six years of lockout laws. Even after that legislation was repealed in early 2020, Sydneysiders did not immediately flock to do shooters at 3am, just because they now could. Behaviours had changed, and interest in that kind of late-night excess had waned. As the sober curious movement has gained traction on social media, zero-proof living has become increasingly de rigeur. Whereas once, stumbling home at 5am and passing out in your makeup was the hallmark of a vibrant social life, sobriety is now the Instagram filter of choice for many who now see abstinence as aspirational and chic.

Far from cutting short the ascent of sober curiosity in Sydney, the return of lockdown might actually be giving it more momentum, Voysey believes. “It's a very different psychological climate to the last lockdown, when there was this real doomsday uncertainty culture. None of us knew what was going to happen, so our responses to that situation were heavily fear based. People got into the habit of saying ‘stuff it, I'll just do whatever. Let’s throw caution to the wind’. This time, I think people feel more angry than fearful, which means they are more energised to retain more control over their choices."

A lot of my clients are most concerned about not coming out of lockdown feeling terrible like last time, and for most of them that was driven by poor diet and alcohol intake.

You might assume this would be a worrying development for the alcohol industry, but in fact, distilleries at both the industrial and boutique scales are looking to zero-proof spirits as a profitable new opportunity. British-made Seedlip is one of the most successful brands of zero-alcohol spirits to emerge in recent years, but closer to home, similar products are gaining popularity.

Seadrift is Australia’s first dedicated non-alcoholic distillery, which opened in December 2020 in Brookvale on Sydney’s Northern Beaches. After spending much of her career working with major gin brands, Seadrift co-owner Carolyn Whiteley decided to be a pioneer of Australia’s burgeoning alcohol-free market. “We wanted to create something that reflected our beautiful coastal environment – the ingredients and lifestyle, the type of things we eat,” she says. “[Seadrift] wasn't created as a gin alternative or whisky alternative or anything like that. We wanted to make a spirit that would go with salads and seafoods, fragrant stir-fries, that you could keep enjoying at a barbecue that's going to last 10 hours.”

Perhaps the most telling sign that catering to the sober consumer is a growing priority for the alcohol industry is the arrival of gin juggernaut Gordon’s first zero-alcohol product in Australia earlier this year. As more options like this enter the mainstream, it seems increasingly clear that our social expectations can allow for the best of both worlds, where a G’n’T and a Z’n’T (zero-alcohol) are both equally at home in the bar. We’ll drink to that.

Still thirsty for the strong stuff? 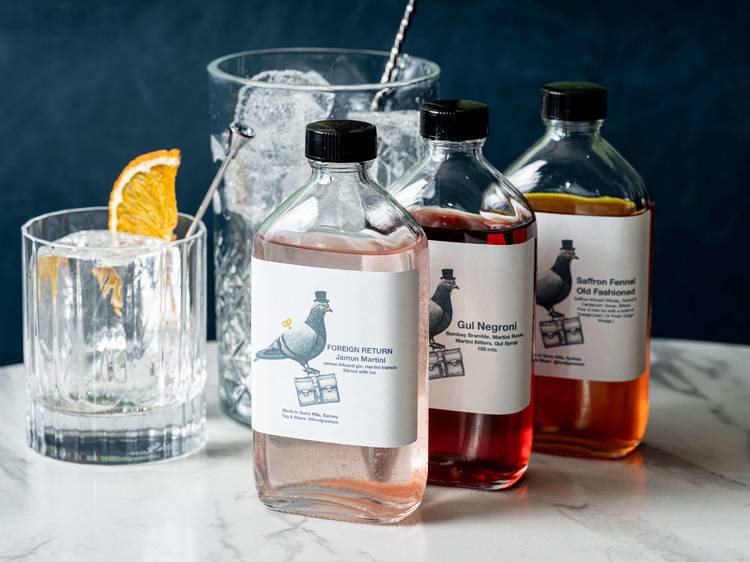 The best Sydney-made bottled cocktails you can order right now

Fact: Sydney’s cocktail game is one of the strongest in Australia. Thanks to our top-flight barkeeps elevating the art of mixology into the stratosphere and the elite local boutique distilleries producing world-class liquor, there’s some damn good drinking to be had in the Harbour City – even during lockdown.

Many of Sydney’s best bars and distilleries are now producing bottled cocktails, so thirsty punters can experience the finesse of a carefully crafted drink from the comfort of their own home. We’ve picked some of the best of the bunch currently available in Sydney. Bottoms up!