34 small humiliations every Sydneysider has experienced

From public transport mishaps to awkward late night-encounters, we've all been there

1. Getting on a bus home from the beach while still wet, then slowly freezing to death for an hour because the aircon is cranking and you're stuck in traffic.

2. Trying to go to the good Bunnings in Alexandria and ending up at the crap Bunnings in Mascot by mistake.

4. Forgetting to tap your Opal before you get on the light rail, then awkwardly having to run off, tap on and make it back in under five seconds (or even worse – missing the doors).

5. Running for a bus only to have it pull away from the curb at the last minute so you either have to pretend you weren't really trying to catch it, or throw your shoe in frustration.

6. Having a car/truck/bus hit the gutter puddle at exactly the right angle to soak you to the bone.

8. Getting into a drunken argument at 1.15am because three of your friends want to go to Newtown, two want to go to Double Bay, and everyone else just wants to go home.

9. Leaving your jacket/wallet/keys/handbag/phone/credit card at the bar and having to return sheepishly the next morning to see if the cleaners found it.

10. Ordering a kebab at 1am from Saray, then watching all your friends smugly eat their pides which always arrive first.

11. Asking your Uber driver to a) go through Stanmore Maccas drive-through on your way home b) stop so you can puke then c) wake you up if you've passsed out two minutes from your house.

12. Going to Foodcraft Espresso because you really want a shot of Tella balls on your Instagram feed.

13. Pushing back the trip you planned to the Royal National Park every weekend, then waking up one morning and realising summer is over.

15. Finding out it's too late to order breakfast (it's all about the all day-breakfast, folks).

16. Arriving at a bar between 3pm and 5pm when the kitchen is closed and you're so hangry you want to cry.

17. Getting sprung in a particularly lengthy Mary's queue by friends who are heading to the Courty for burgers that require no wait.

18. Going into one of those fancy cold-pressed juice places and then realising it's an $11 drink after it's too late to back out with dignity.

19. Feeling self-satisfied about all the green bags you own and then never, ever remembering to take them to the shops.

20. Watching a pedestrian outstrip your bus in peak hour traffic.

21. Wanting to go to the shop/restaurant/bar everyone's talking about, then realising you have to wait in line for an hour to get in.

22. Discovering you're too unfit to walk up Riley Street without stopping for a rest.

23. Trying to find food in St Leonards after 7pm.

24. Inviting an international friend to come and visit you, only to have it rain the whole time they're here.

Holy apocalypse. Check out those clouds 😱

25. Wandering past a large stack of broken umbrellas after a storm, and feeling a twinge of sadness at their fate.

27. Navigating Town Hall station with a pram/suitcase/in a wheelchair.

28. Figuring out that after multiple decades in the city you still don't know which platform at Central Station is the City Circle.

29. Wandering aimlessly around a department store, clutching a blender, unable to find someone to sell it to you.

30. Befriending someone because they have a boat.

31. Enduring the confrontation when said boat-owner realises what you've done.

32. The moment it dawns on you that renting in inner-city Sydney means you'll probably never own a dog.

Forget the waves, the best part of Bondi Beach is checking out all the talent. That's where we met this handsome dude, Cash Fabritzio Yeah Yeah Crocker. Over the next few weeks, we'll introduce you to all the other adorable pups we've met on the Bondi promenade

33. Going to a share-plate restaurant and realising that – between the vegetarian, the coeliac, the dieter and the guy with a nut allergy – there's literally not a single plate you can share.

34. Getting excited about jacaranda flowers only to slip on a particularly squidgy pile or get stung by a bee that is hiding in the fallen blooms. 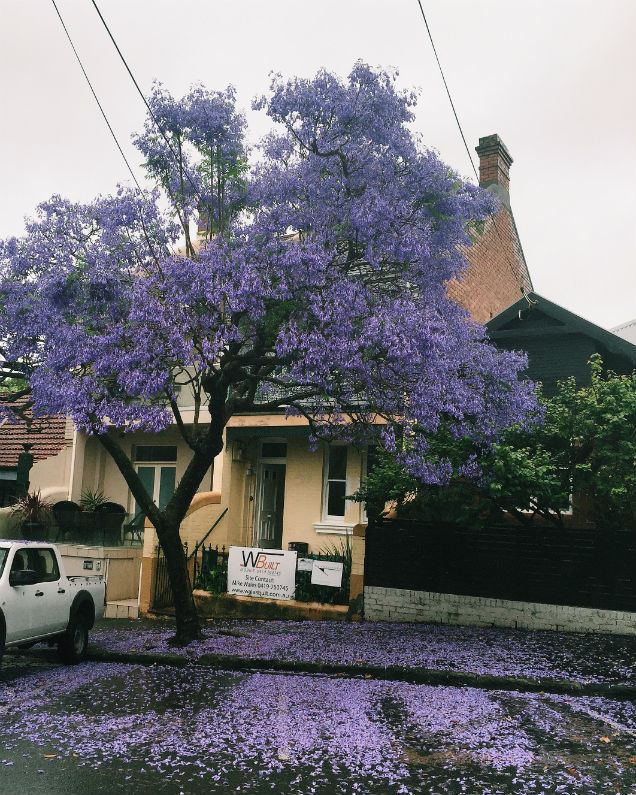 A Jacaranda Tree in GlebePhotograph: Time Out