Sydney's favourite basement danceteria has been dishing out late night good times for almost six years. A haven of dancefloor antics, fruity cocktails, vibrant personalities and no phone reception that was as inclusive as it was diverse and forward-thinking, while still maintaining an emphasis on unpretentious fun. As owners Jimmy and Hana move on from the Liverpool Street venue (but watch this space, there's plans for Goodgod in 2016, just not as a traditional club) we salute you, Goodgod Small Club.

It’s possible that I’ve spent more time inside Goodgod Small Club than Jimmy and Hana themselves, so picking a favourite memory from the thousands of amazing ones is borderline impossible. I can say though that nothing beat those first few visits in 2010, as the club filled with new structures and artwork and made the transition from La Campana to Goodgod. With every new addition we realised what a special place this was going to be. 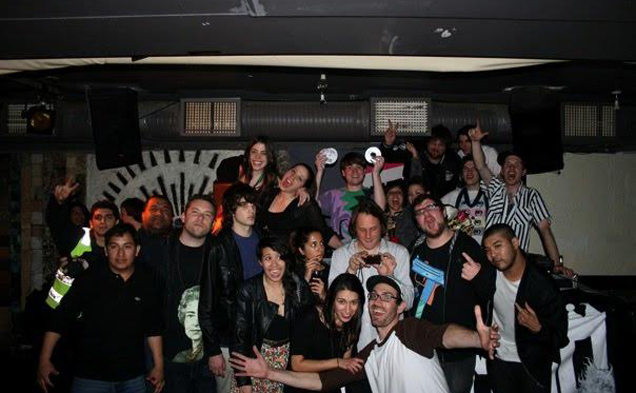 My fave Goodgod memory would have to be one of the first nights I'd ever been down to the venue for one of the early Ro Sham Bo parties. We stayed until the end, and as was tradition 'Come On Eileen' played as the final song of the night. There was about 25-30 of us, all in a circle linking arms and doing a massive kick line during the slow down breakdown bit. It was smiles all round and Mum would have been proud.

I often refer to Goodgod as my spiritual home – it housed the rebirthing of multiple incarnations and it was a place for my pivotal cyclical years (20 - 26) of change and figuring-outness-of-self. Under its roof I've met and sustained relationships with the loves of my life, had ephemeral experiences that have become my brightest memories, met an ex-boyfriend or two, danced until it hurt of joy and just had the space to grow.

Goodgod propelled my career (as well as so many others within Sydney) as a solo dancer and dance teacher. It gave me a platform to connect to people – who I realised were my people.

The first dance class we did at Goodgod was 'Single Ladies'. I remember exactly what I was wearing, that I was nervous and I was surprised it had sold out. I'd never taught that many people, especially not in a bar and I was a totally mortified that I was going to mess it up. I quickly discovered that teaching here was the greatest thing in the world.

To the people who came and continue to come – you've made my heart expand and really solidified that dance is what I want to do with my life. To Jimmy and Hana – I watched you from afar for years like you watch the older kids in high school. I think I idolised you before I even knew you – I definitely drunkenly attempted conversations with you where you were polite and I am glad that you don't remember them now. Thank you for taking a chance on me – for having a vision that was inclusive and beautiful and bloody rich. Goodgod sits heroically, a champion of its own within Sydney culture. I write this with tears of pride in my eyes – I love you and thank you.

Looking back, May 18, 2013 was a pretty interesting night in pop music. I’d been running around Sydney’s CBD to watch Kanye West unveil Yeezus with his hype-baiting building projections. I was mostly on my own, because a lot of people had fled to the country for Daft Punk’s strange, ambiguous album unveiling in Wee Waa. And over at Goodgod, a new, young artist from New Zealand played her third ever show.

At the time, I was pretty new to booking Goodgod. It was my first venue, but I already knew that, when folks pitched artists, every new act was supposedly about to conquer the world. But sometimes they really do, and earlier that year, I'd been pitched a then-unknown Lorde. Listening to her EP, it clicked immediately, and I knew we needed to have her Sydney debut at Goodgod.

As we all know, she’s blown up since then – world tours, arenas, and one of the best debut records in recent memory. But her Goodgod show remains as such a memorable moment – a packed room of keen music fans, watching a very new (and already very good) artist play a set that burst with possibility. There’s few things more satisfying than getting to play a part in moments like that.

Seeing Black Vanilla for the first time at a GoodGod birthday in the front room a few years ago, watching Marcus and Lavurn body roll their way through the crowd and thinking, "This is the sexiest damn band I've ever seen. Is this real life? Is this just fantasy? Did they kill, ingest and rebirth Prince at his prime?" Watching Stephen Malkmus play a brilliant set earlier this year, fanning out and singing along and feeling like I was seeing one of my all time favourite performers playing in my front room... which is probably one of the nicest, most common GG feelings. Miss you already GG.

Goodgod captured my heart back when it was a rave cave bolt-on to a Spanish restaurant, and it's been a constant in my life ever since. It has supported so many impeccable curators, chefs, DJs and live musicians that it will leave behind a cultural crater ten times its actual size. I saw Lorde and Flume launch their careers here, sweated it out dancing to everyone from Levins to Diplo and made lifelong friends playing trivia in their tropical cabanas. Sydney just got a lot less weird.