The Figure Eight Pools have gone viral. You may have seen them on Facebook or Instagram, two perfect circles of crystal blue water, connected in the centre, sitting inside a rock ledge. They’re beautiful, and getting to them sounds like an intrepid adventure into a slice of untouched, subtropical paradise – the Royal National Park.

In every photo and video of the area, you get the sense that if you visit, you’ll be alone in a remote wilderness site. The pools are a thirty minute scramble over the rocks from Burning Palms beach, which is itself a 45 minute descent from the nearest road. You’re certainly remote. But when we went yesterday, we were far from alone.

Peter Pearce, the Secretary of Burning Palms Beach Surf Lifesaving Club estimates that around 800 tourists made the trek out to the pools on Saturday the 9th of January. The area was so crowded with tourists taking photos, it looked like Disney Land, or the Colosseum. 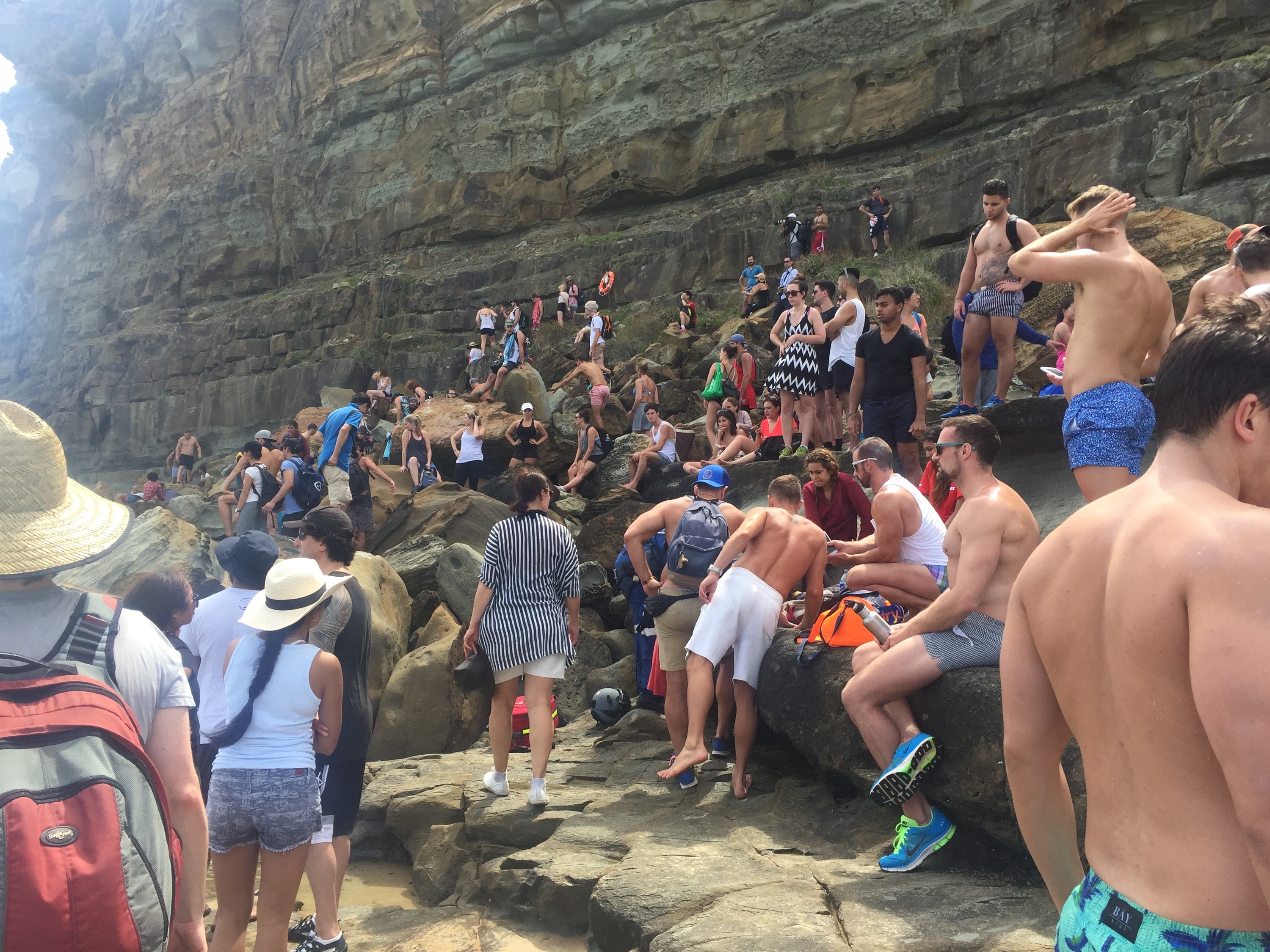 The crowds at Figure Eight Pools

But at Disney Land, there’s no risk of huge waves crashing into you and scraping your body across the sharp rocks. That’s what happened to scores of tourists and Sydney-locals who ventured out onto the rock platform, even at low tide.

“I couldn’t count the number of injuries. It seemed like every person walking past had some sort of cut or graze from the rocks,” Pearce said. He estimates his team of surf life savers treated over fifty people for lacerations. “We had to tell people to go to hospitals and medical clinics. There were people with shells stuck in their wounds,” Pearce told Time Out. “Those people had to walk out of the park."

As we were walking back from the pools, we saw dozens of people with bad cuts and scrapes. Many of the rocks around us were covered in human blood.

Over the past three months, hundreds of visitors have been pouring into the park to look at and take photos of the pools on sunny days. " It’s gotten worse and worse. There are so many people coming down here, it gets difficult,” says Pearce. “I thought the patrol yesterday did a very good job. Members that weren’t on the job came down."

The number of people coming is unprecedented. Visitors have been finding out about the pools through Instagram and Facebook groups, with little context about the area. Many of them are completely unprepared for the walk, and have no idea of basic wave safety. "The waves break across the platform, and that’s what does the damage. People should know better. If you see a wave hitting the rocks and sweeping across the plateau, you should know not to go there,” says Pearce.

"If it’s a nice flat day it’s safe around there. If it’s a big sea day and there’s a big swell, it’s not safe.” Yesterday was a big swell day, but the conditions were far from unusual. The Royal National Park’s website recommends visitors check surf conditions before venturing onto the rocks.

Pearce says he doesn’t “know what would have happened” if the injuries that occurred yesterday had happened mid-week, when life savers do not patrol near the area. “There’s no one around.”

Alarmingly, there were even some young children scrambling out over the rocks. Other visitors were taking huge risks in order to get good photos, standing on the very edge of the rocks, as waves crashed behind them. "You tell people ‘don’t go around, it’s dangerous', and they do it anyhow. We don’t have the authority to stop people going," says Pearce.

Time Out Sydney recommends that only experienced walkers, who have checked the tide reports and have knowledge of surf safety venture out to the Figure Eight Pools. If the reckless and inexperienced continue to visit, it’s only a matter of time before someone is killed.