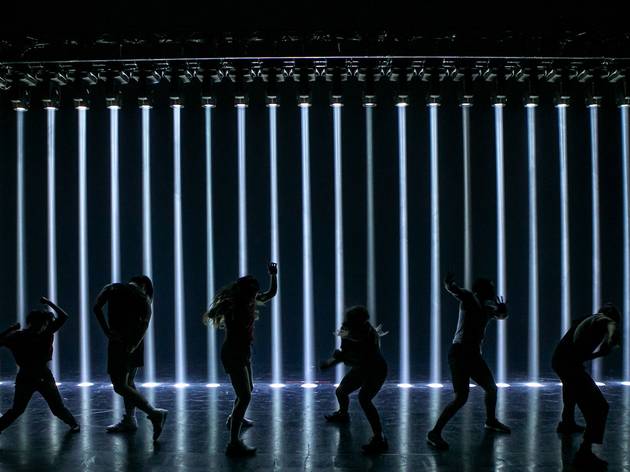 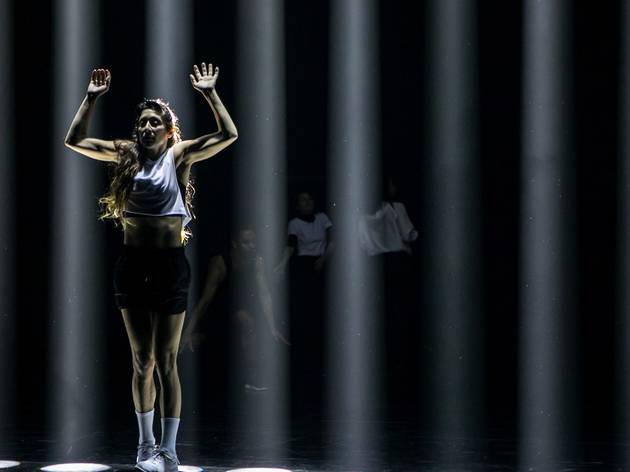 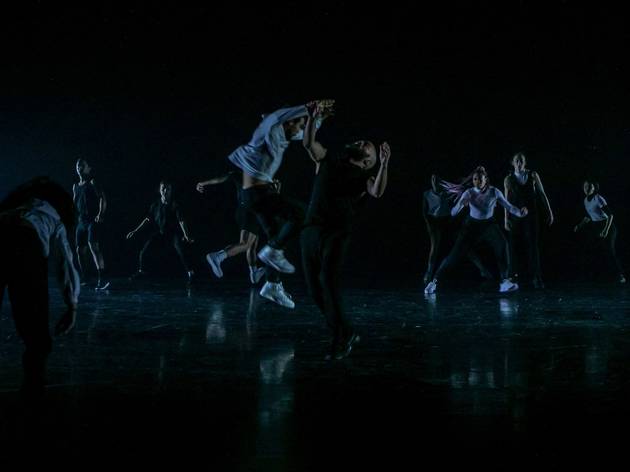 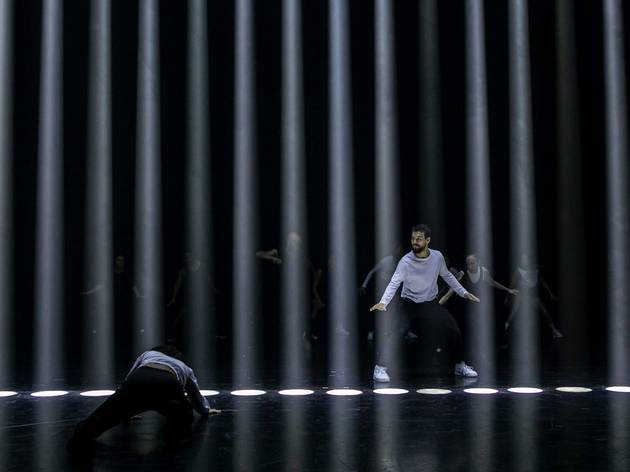 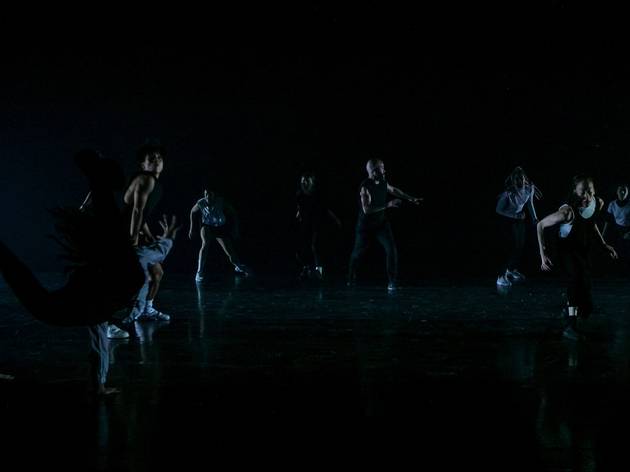 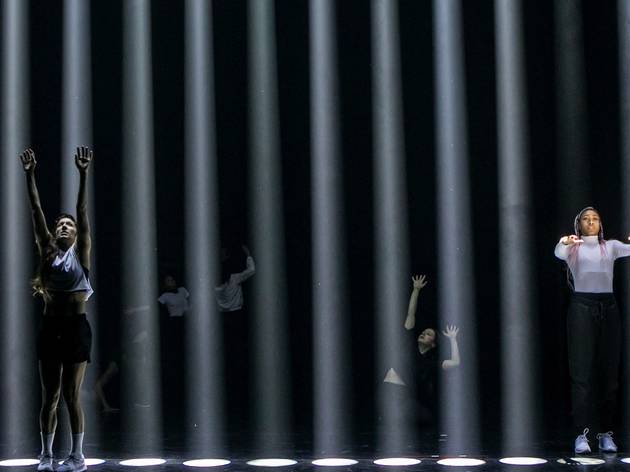 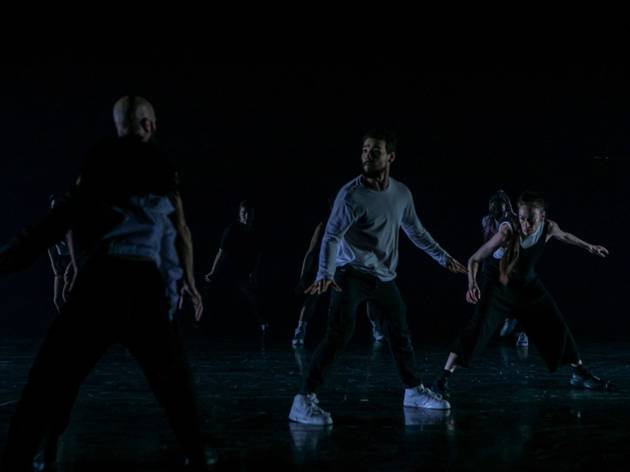 A black stage. An inky void. The abyss. An insidious hiss sizzles on the air. It’s a wilderness of white noise, a skittering soundscape toeing the line between the natural and electronic, the acoustic and amplified. Tinny recordings of profound thoughts – on political ideologies, borders, stolen freedoms – overlay the fug of static. Dancers dressed in simple black and white march at right angles around the stage, their faces unreadable, their gait intense yet casual. The score intensifies: throbbing, swelling, convulsing with ever increasing decibels. The monochromatic procession strides on.

This is the opening scene of Dana Gringras’ Frontera, performed by Canadian troupe Animals of Distinction, and frankly, it’s an eyeroll. Seemingly lifted from the playbook of contemporary dance clichés, all the predictable elements are here. A score of generic electronica? Check. Profound theme? Check. An edgy cast of normcore waifs dressed in off-the-rack active-wear? Check. Dance that isn’t really very dancey at all? Check. All bases covered.

This could easily be the start of something derivative and forgettable, starved of any meaningful identity. But it takes a dance maker of truly distinctive bravery to create a work that can begin so obviously and yet discover such pioneering intersections of stagecraft, storytelling, sound and movement.

The first moment Frontera reveals its true innovative colours is an illusion that almost defies logic: a single human form, emerging from the wings, seemingly propelled by an intense column of light. The numerous ways in which the physical and the luminous exist in both counterpoint and combination are a coup. Not least because the ways in which light is manipulated on stage are all the more powerful for their nuance and restraint. Designed by United Visual Artists, a rig of pivoting spotlights conjure prison bars one moment, then a flickering aura as if some ethereal, cosmic energy was invading the stage the next. There are more declamatory gestures too, such as a dim flood of red that plunges the stage into a volcanic, otherworldly realm (that, with the images of our fire-ravaged country in my periphery, is unexpectedly triggering). Another sequence turns the entire theatre into some colossal robotic scanner, dispassionately dragging a thin beam of strobing light over a heap of cowering forms.

Equally impactful is the score, largely performed live by alt-metal quartet Fly Pan Am. Their minimalistic yet muscular brand of electro-powered thrash reaches volumes at which it is no longer heard but rather sensed viscerally, in your organs, in your bone-marrow. The movement is closely aligned with the trajectory of this soundworld, so that at its peak, the performers can do little else than sprint around the stage, every inflection an exhausting, bruising extreme.

However, in isolation, the choreography might be quite confusing. Gingras has assembled a bafflingly inconsistent collective of performers, who each have clear strengths, but as a cohesive group, a lot of shortcomings. Some clearly come from a classical background, the lines of their body instinctively disciplined, while others channel a more urban energy, with elements of hip hop percolating to the surface. It’s not necessarily a bad idea to select a cast of such differing talents, but there never seems to be a point where those fortes are allowed to really shine, where their full virtuosity is tested, where their differences find meaning.

Far more successful is the way Frontera engages with its narrative undercurrents. Artists are the lens through which the world passes, and the political extremes of our ever more fragile democracies is a topic that has beckoned many creatives. In Frontera, it imagines this concept as an exploration of otherness and isolation, as if the act of segregation is in fact a mutually destructive submission. It’s when the ten bodies on stage act as one indivisible meta-organism, a mass of individuals with a symbiotic purpose, that they can overcome these boundaries. It’s a touching notion, even uplifting at times, but it’s telling that Gingras chooses to end Frontera not with an image of united hope, but with the inky void with which the work begins, the abyss ever widening.