Some people geek out over movies or sports or celebrity gossip. Sydney’s new 24-hour economy commissioner Michael Rodrigues, however, is a fanboy for cities.

“I’ve always been fascinated by how cities create culture," he says. "When I go to other cities, I just get such a thrill out of discovering how they tick. Because it's visceral and real – when you’re out in a city you’ll experience and happen upon things that no algorithm will ever put in front of you. It’s more chaotic. More is left up to chance.

"And it’s those chance interactions that create culture – whether it’s high or low, international or local, ancient or contemporary. All forms of culture are the expression of interactions between people. Cities are the perfect place for this, for people to be in contact, to share and create culture. And that tends to be something that exists best at night.”

A deep affinity for urban life after dark is an essential qualification in Rodrigues’ latest gig. Inspired by the ‘night mayor’ model that has become the norm in many European and American cities, NSW’s first nightlife champion will be spearheading efforts to rehabilitate Sydney’s ailing night-time scene after the double-whammy of the lockout laws and the 2020 shutdown.

But an enthusiastic love of the city is only part of the reason Rodrigues was tapped for this newly created position. The one-time lawyer, former Time Out Australia managing director and founding chair of the Night Time Industries Association already has a well-established pedigree as a defender of the night, after years spent lobbying for nightlife businesses struggling against the stranglehold of the lockout laws.

When you’re out in a city you’ll experience and happen upon things that no algorithm will ever put in front of you.

As MD of Time Out Australia, which he launched in 2007, Rodrigues had enjoyed a bird’s-eye view of Sydney’s dynamic hospitality scene for several years. But when, in 2014, the introduction of former NSW premier Barry O’Farrell’s lockout legislation began to corrode the urban culture his publication was heroing, he made the decision to elevate his stake in the conversation from passive observer to outspoken advocate. “I never thought of Time Out as just a media business, and I don’t think I really thought of myself as just a publisher,” he says. “The businesses that were struggling, they’re run by our friends. And when you see your friends in trouble, your instinct is to help.

“If you see a problem, you can either sit around and just talk about it, or you can say, ‘What if we put our energies into actually making a change?’ So I made a personal commitment to stop talking about it and actually start campaigning. Commentating will only get you so far.”

Rodrigues honed his ability to command a room while a practicing lawyer at corporate law firm Allens – a skillset that would prove invaluable as he rallied punters and nighttime professionals to protest the lockouts. His attention-grabbing anti-lockout campaigns for the Night Time Industries Association included hanging an illegal disco ball to protest draconian licensing rules and impersonating the rebellious Ren MacCormack, immortalised by Kevin Bacon in the movie Footloose, to lampoon the government's regulation of nightclubs. But beyond the stunts, Rodrigues was also hustling behind the scenes, bringing together business owners and government agencies, brokering discussions and helping to draft the strategies that could help stimulate the nighttime economy post-lockouts.

The businesses that were struggling, they’re run by our friends. And when you see your friends in trouble, your instinct is to help.

In 2019, finance analysts at Deloitte crunched the numbers on just how much lockout legislation had cost Sydney’s economy. The figure they reported was shocking: $16.1 billion annually. With the negative impact of the lockouts irrefutably spelled out in dollars and cents, the Berejiklian government finally moved to roll back the wildly unpopular legislation, with restrictions lifting on the CBD and Oxford Street in January 2020 and on Kings Cross in March 2021. However, a less reported-on part of Deloitte’s investigation made clear that repealing the laws would not be enough to repair the damage they had caused.

“A more vibrant, inclusive, attractive night-time economy does not necessarily mean having a bar on every corner," the report concluded. "A narrow focus on drinking culture serves only to define the night as a negative space, where crime and conflict are some of the associated potential risks, with a corresponding need for regulations and restrictions.”

Recent changes to late-night licensing, post-lockouts, have allowed many Sydney venues to extend their opening hours past 3am, every night of the week. However, while officious impediments may have eased in Sydney, the night-time economy is also being dented by a more generalised downturn in the popularity of going out: not just in Australia but in major cities around the world. As streaming services and meal delivery apps have proliferated, a night on the tiles has become a declining pastime for millennials, viewed as too expensive, too impersonal, too stressful, too tiring and too dangerous.

Our addiction to staying in has only strengthened over the past year, as lockdown restrictions have inspired hospitality businesses to refine their home-delivery game, and cynicism about the calibre of Sydney’s nightlife still lingers post-lockouts.

As he steps into his role as 24-hour economy commissioner, Rodrigues faces a challenging task on three fronts: helping government improve conditions for night-time businesses through government channels; innovating with businesses to develop a more diverse and affordable after-dark offering less reliant on alcohol; and persuading Sydneysiders that the experiences that await them on a night out can trump whatever equivalent entertainment they might be able to access from home.

It’s a hectic equation to solve, but far from being intimidated, Rodrigues believes his unique resumé is what makes being Sydney’s first night mayor his dream job.

“Translating is a really important skill in this role. And what I mean by that is how you translate between the different verticals that comprise the hospitality and going-out sector, then translating that into the language that politicians can action and consumers can understand. So I think the diversity I’ve had in my own career has given me an ability to sit in those rooms and lead those conversations in a way that builds consensus.

“Ironically, because of the lockouts, Sydney is in a much better position as we come out of 2020, because we already have a recovery strategy ready to go. And we understand the principles we want our night-time experiences to have, regarding safety, inclusivity, diversity, accessibility. But what does the product look like? What do we encourage back and what do we reinvent?

"The answer to that isn’t going to be something we can easily plan for or even anticipate really. If you ask someone about a time when they had a perfect night out, very few are going to say, ‘Well I sat down and planned out my itinerary.’ They’re going to say that they discovered something by accident that meant they met someone cool who showed them something they had no idea was there. And that kind of wild, exhilarating adventure is something that simply doesn’t exist in the digital space.

"So while my official KPI is to deliver the action plan under the agreed strategy and bring all those moving parts together, success for me is that when I go out, that I feel excited to be in this city.” 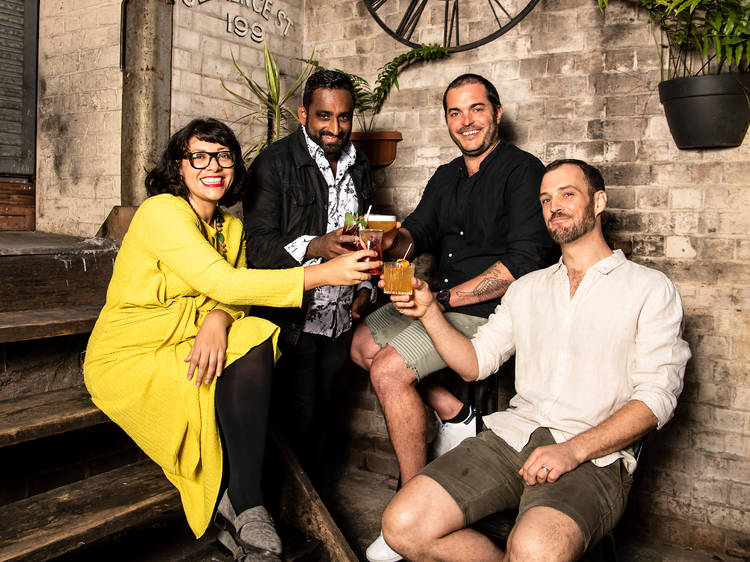 YCK refers to the York, Clarence and Kent Street area of central Sydney – a three-block footprint between Town Hall and Wynyard that in recent years has cultivated one of the most impressive concentrations of top-flight drinking dens in the city.

The collection of bars that call this corner of the CBD home have now joined forces with the City of Sydney to form YCK Laneways. This new nightlife hub will be a destination for anyone seeking the world-class hospitality of the city’s best barkeeps alongside an eclectic range of regular events, performances and happenings every night of the week.