Four guys get together and decide to open a venue – the sort of place that they want to eat at. The first letters of each of their forenames happens to make up the acronym 'ACME', which ain’t a bad name for a restaurant, right? So goes the tale of ACME in Rushcutters Bay.

Designed by Sydney architect duo Luchetti Krelle, the exterior is painted a vibrant blue with a neon sign illuminating the doorway, but inside its all about rough, exposed plaster set against luxe, backlit mirrors, pale wood, black leather, bar-stool seating and brass detailing. No wonder it’s nominated in the internationally acclaimed Restaurant and Bar Design Awards 2015.

Letter 'E' is for Ed Loveday of Darlinghurst’s the Passage bar (co-owned with the 'A' of the group, back-of-house extraordinaire Andy Emerson) and you'll find him on the bar serving up some killer cocktails. Go for 2015’s favourite cocktail and order a Negroni. It’s called a White Negroni here and it contains the typical gin and sweet vermouth you know, but with Suze bitters replacing Campari. It's bitter and refreshing and perfect as a palate cleanser before you start your meal.

It’s all share plates here, so ask your waiter how much to order between you, as every plate is sized differently. The baloney sandwich has built up somewhat of a rep since this place opened in 2014. The milk bun is soft and supple, the tomato sauce is sour and refreshing and the baloney, smooth and light. It’s a simple dish and so isn’t the best show of chef Mitch Orr’s talents (he’s the 'M'), but it sure is a killer beer snack.

If you wanna see what this man can do, better to order the parsnip to go with that drink. It's been cooked to buttery tenderness before being battered and fried until crisp. Dip it into the spicy jalapeño cream on the side, and with a plummy, minimal intervention 2014 Grenache from Frederick Stevenson’s Barossa vineyard in your other hand, you’ll be offering to buy the round in no time, it’s that good.

True originality comes in the burrata, which is a bit of an education, weirdly, in Chinese cuisine. It's served with cubed, jelly-like century egg with umami notes so strong it tastes almost like beef consommé. It all rests on a frothy bed of onion-based soubise sauce – smooth and silky, it's the kind of thing you could eat in any mood, and you'd feel comforted.

In contrast, the carpaccio parmigiana tastes just how is sounds: a parmi, but with raw beef instead of schnitty. It’s layered up on a plate of fresh, tangy tomato sauce, and topped with fragrant basil, tender fried eggplant and a drizzle of mild cheese sauce. It could do with a bit more seasoning, but you can't knock these guys for creativity.

The scent of the ocean greets you as the house-made spaghetti lands on the table thanks to the generous scattering of nori (who needs parmesan when you have the umami of the sea?). The pasta is tossed with a “Korean bolognaise” which turns out to be minced pork and finely chopped calamari in a fermented Korean chilli paste-base. It’s tasty and fun, but is utterly trumped by the one dish you simply have to order. Sure, pig’s head pasta doesn't sound that appetising, but think about it: all those little, full-flavoured pieces of meat are just waiting to be cooked slow and eaten up. Thrown into a bowl with macaroni and chillies, the pieces of shreddy meat range from soft and melting, to crisp and crunchy, and the house-made macaroni is so thin and delicate that you can almost see through it (Orr learnt the craft under Giovanni Pilu in Freshwater – one of the best pasta makers in town). Mix in the raw egg yolk that crowns the top to create a sauce, and what you'll get is a spicy, creamy base for that paper-thin pasta. It's our dish of 2015.

Don’t skip dessert, as there are some seriously creative offerings here. The Malteser ice cream comes as the scoop-size you want to serve yourself as home but hold back (and eat it from the tub instead, in blissful ignorance). It's a simple vanilla gelato with crushed Maltesers (why imitate something so delicious already, and lose the element of nostalgia?), all crunchy and melty and bloody delicious. But the creativity prize goes to the coconut rice cream with white chocolate, a joint creation by Orr and one of his chefs, Analiese Gregory (ex-executive sous-chef of Quay, no less). It’s a pool of smooth and creamy, puréed rice pudding topped with velvety coconut sorbet which is fresh and clean, and rich in a different way. Underneath is a little rubble of caramelised white chocolate, adding some crunch to the affair. It’s a dissertation on textures, temperatures and balance that’s been thrown on the pyre and resurrected in edited form. We can’t stop thinking about it.

The hip-hop tunes are pumping, without being too loud. The staff are friendly (led by the friendliest maître d' in Sydney, Mr 'C', Cam Fairbairn), and you can even sit overlooking the kitchen pass if you want to see the chefs in action. Which you should, because Orr and his team are making some of the most exciting food in Sydney right now. Sure, not every dish is perfect, but every one is utterly creative. And that’s what we love the most about it: it’s on the edge and loving every minute. And by gosh has it got style.

Like this? Check out our review of ACME's other restaurant, Bar Brosé, for similarly excellent eats. 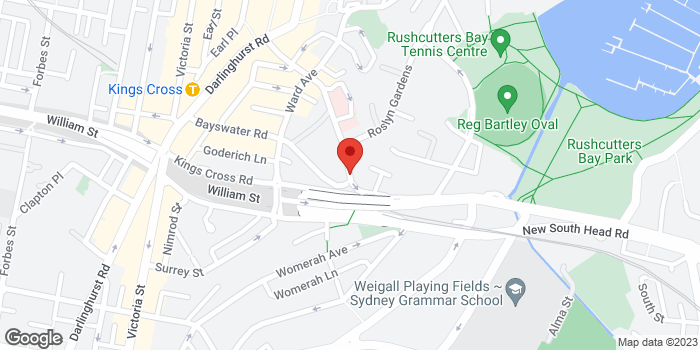