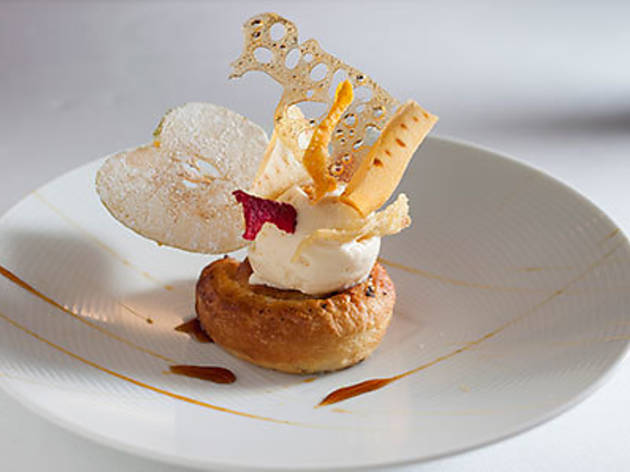 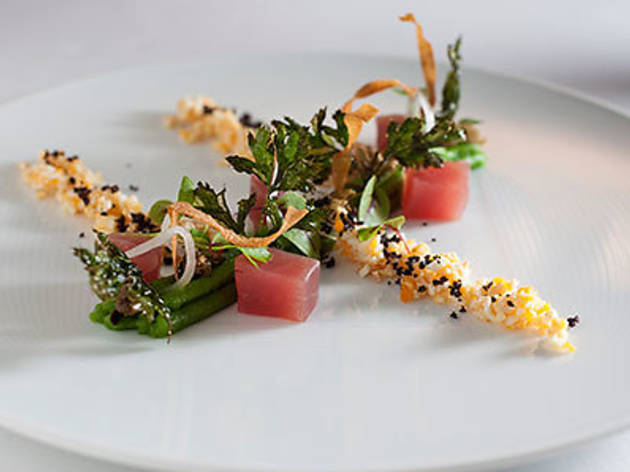 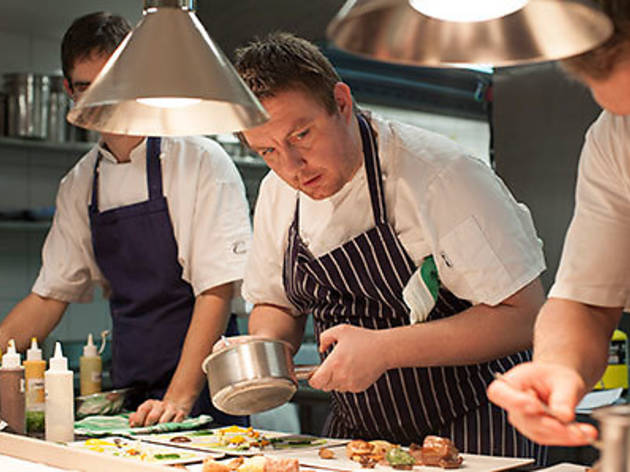 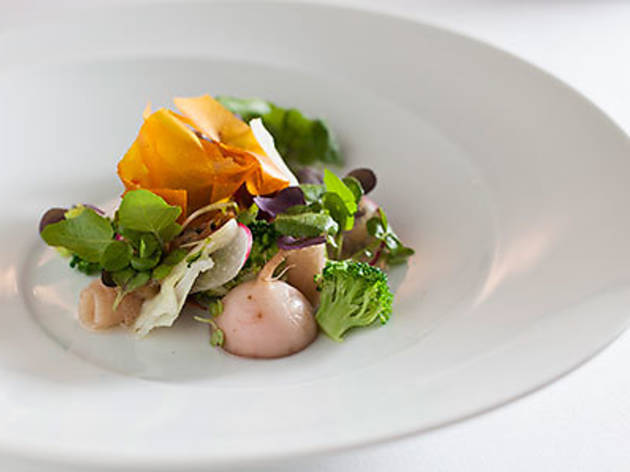 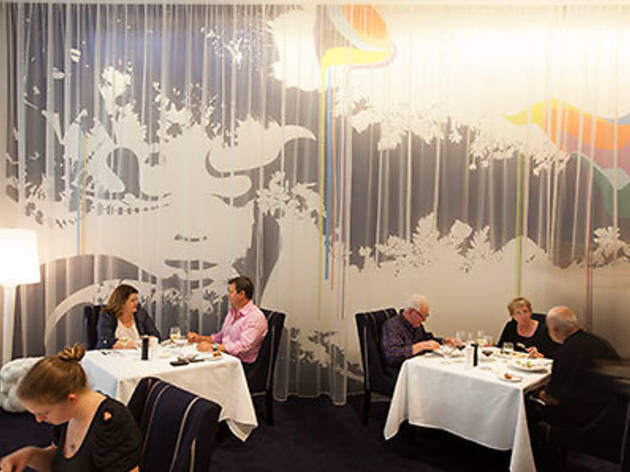 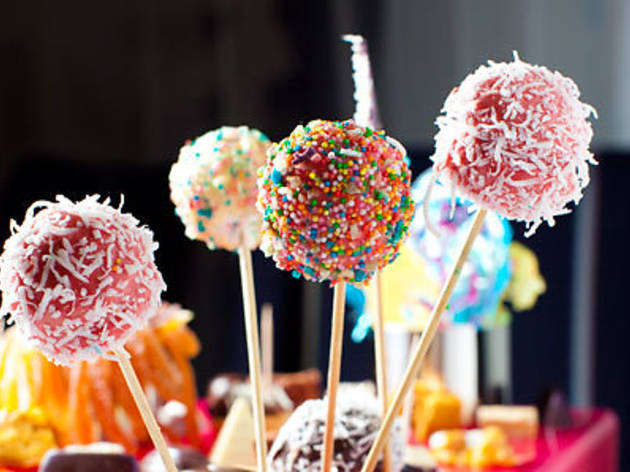 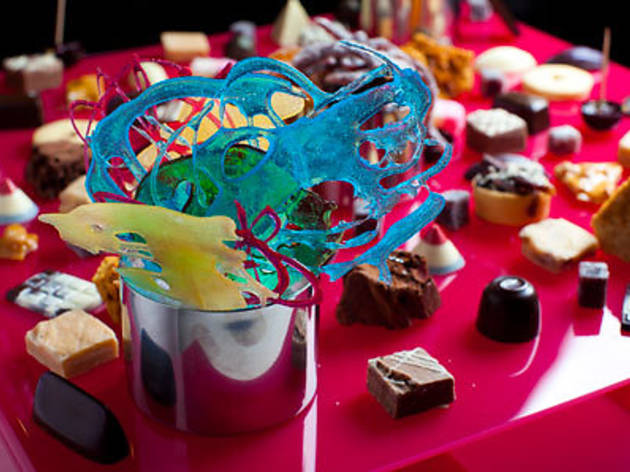 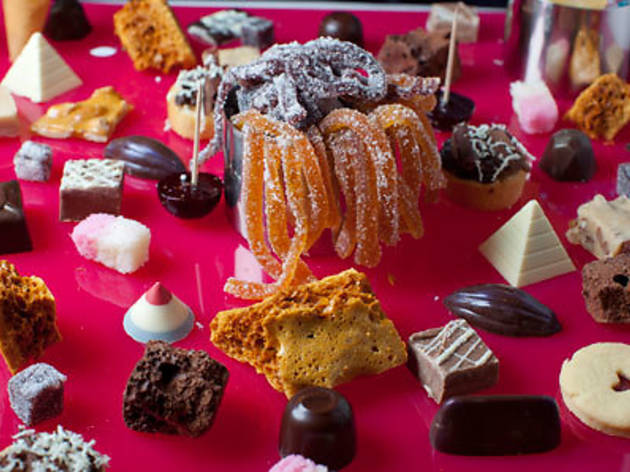 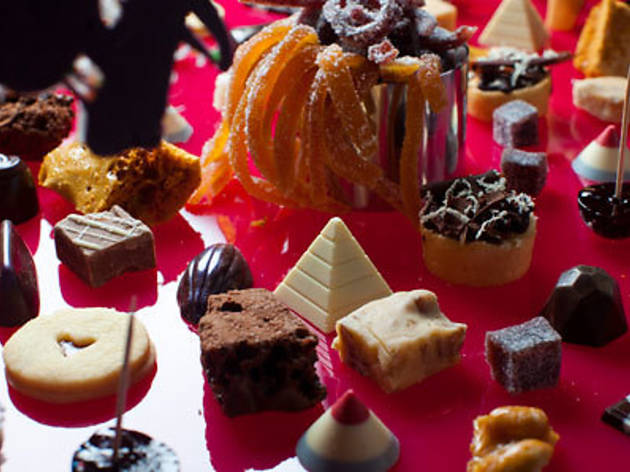 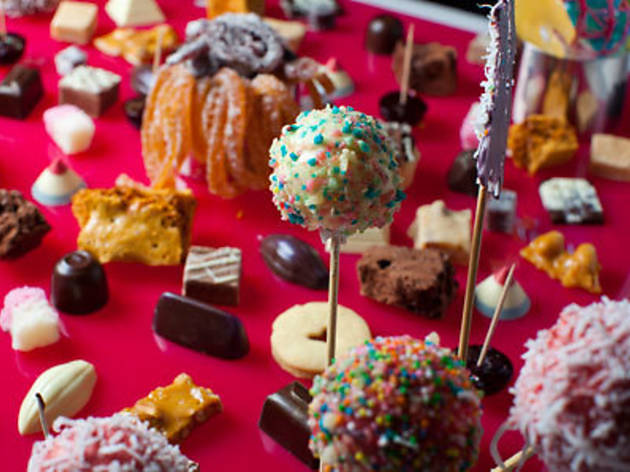 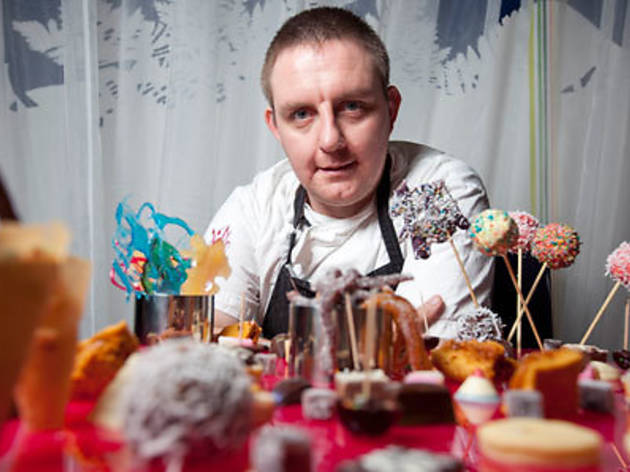 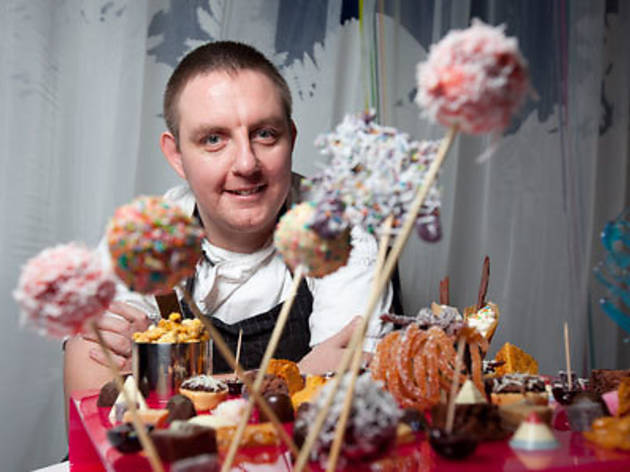 The old Becasse site lives again with a new look, new chefs and the most exciting petit fours in town

Clarence Street was left with a large progressive-French hole in its heart after Justin and Georgia North moved Bécasse to the Westfield Sydney complex last year. It's since been plugged by Arras, Adam and Lovaine Humphrey’s once-upon-a-time Northern English inspired restaurant, which has moved from its original Walsh Bay digs. Say goodbye to the muted mushroom tones and hula-hoop crystal chandeliers of Bécasse and hello to royal purple carpet, Perspex handrails and vibrant wall murals hidden behind chiffon curtains. It’s like the restaurant developed jazz hands.

Start with dainty canapés of thin, crisp deep-fried slices of ox tongue and a little smoked salmon crust topped with a single borage flower while you weigh up whether to EMD or do the full eight-course degustation. We'd suggest the latter - the Humphreys' menu has recently gone from snappy Northern English inspired food to fanciful small plate stuff that doesn’t translate quite as well in larger portions.

It’s also well worth doing the matched wines, too. The incredibly talented Alon Sharman (ex-Quay) is behind the grape juice. He might start you off with a crazy biodynamic sake, then pour anything from German riesling to Aussie chenin blanc.

It’s the dishes that aren’t crazily worked that really stand out. Take fresh, plump scarlet figs adorned with a few slices of house-cured ham, then dressed with honey and lifted by a crunchy salad of witlof, marigold and blackberries. It's restrained, elegant and bittersweet. Serving puffy, sweet scallops with sweetbreads and chicken gravy is a smart move. But then there are the swirly towers of black and white squid mousse crowned with a thicket of Jerusalem artichoke crisps – there’s just a bit too much going on. Instead, we're throwing our hands in the air like we just don't care for the pickled vegetables with slow braised onions and bitter lettuce. It's a light-yet-punchy palate-cleansing transition to the heavier proteins such as the lamb rump with pease pudding and the pork belly cooked in milk.

A note on the music: it sounds eerily like the soundtrack to 1984’s Breakin’ Two: Electric Boogaloo. Which is fine if you’re popping and locking to save the local community centre from demolition. But probably not so much when you’re working your way through a $140 eight-course tasting menu.

Speaking of which, no doubt you’ve seen/read/heard all about the sweet things at Arras. We’re here to tell you it’s all true. Take the sugared root vegetable crisps and vinegar ice cream: it’s like dipping fries into soft-serve at Maccas when you’re stoned. And, of course, that moment you’ve been eating dinner for: the petit fours tray. It’s that metre-wide fluoro pink Perspex wonder covered in fudge, honeycomb, fruit jubes, jawbreakers, sour worms and all manner of chocolates. Pick whatever you like and sink back in diabetic bliss.

Here’s the thing. Despite the excellent service and a few really cracker dishes there are some problems here. For the price, you expect every dish to pop – not every few. Also, make sure to check your bill for the service charge before tipping. They state it on the front of the menu, but we missed it and you might too. You're more than welcome to ask for it to be taken off and tip what you like.

This is a restaurant with heart, and they’re cooking hard. The kitchen is passionate about what they're doing and the floor is a slick, professional operation. Bécasse set the standard for Clarence Street – it’s up to the Humphreys to keep the kitchen fires burning.