You may have noticed the Northern Beaches are having a bit of a moment. Breweries are popping up all over the place, and some of our favourite new cafés – Smalltown and Showbox Coffee Brewers, we’re looking at you – recently opened up this way. Now the restaurants are following suit. Barrel Bar and Dining is on a consistently busy stretch of Military Road in Cremorne, next to the beautiful Hayden Orpheum Picture Palace. It’s the kind of eatery that’s been sorely lacking in the area – a bit fancy, but still a place you could pop in, post movie, for a glass of wine and a quick snack.

It’s a shared venture between three of Sydney’s most seasoned sommeliers: Stephen Thompson (previously of Balmoral’s Public Dining Room), Tony Binning (ex-Aqua Dining) and Alex Searle, who, with two and a half years under his belt at Momofuku Seiōbo, is our server for the night. No guesses, then, for how strong the drinks list will be. Here wine is as much a part of the dish as the food, so let go of the purse strings and trust their suggestions. From Sunday through Thursday, you can even bring a bottle of your own and they will match dishes to your drop. Given the calibre of cellar typically found in Cremorne, this is a very smart idea.

Settle in with a sharp and clean Cinsault grenache rosé from Provence and order the seared Alaskan scallops. They are cooked perfectly – nicely caramelised on the outside, silky smooth within. Puréed edamame, whole edamame beans and crunchy pine nuts create a textural contrast and sweetness that don’t overpower the shellfish.

We are advised to go with the Squitchy Lane pinot noir from the Yarra Valley for the steak tartare, and who are we mere non-sommeliers to disobey? The raw, finely chopped fillet arrives with crisp plains of melba toast hiding a quenelle of lightly crushed hazelnuts mixed with mustard, capers and eschallots. Caper powder is sprinkled over the top and there is rocket puree on the plate. It’s glaringly obvious chefs Zac Stanning​ (ex-Public Dining Room) and Luke Davenport (ex-Cottage Point Inn and Mr Wong) have worked their technique to near perfection.

We have to talk about the carrots, which are prepared three ways. Some are cooked confit (in fat) for 24 hours until they’re soft and sweet. Others have been smoked and pureed. The rest have been pickled, providing sourness and balance to the dish. Little wedges of salted honeycomb dot the plate alongside bright green, abundantly grassy carrot tops. You probably won’t ever have anyone take so much care over the humble carrot, so this dish is a must.

A Cone Bay barramundi with buttery rosti is tender and sensitively prepared, but what’s with the accompanying asparagus confit? It should have been cooked at speed to retain all of its green glory. The Hunter Valley hanger steak, sous-vided for three hours before hitting the grill, is a meat eater’s dream. Served medium, it comes with smooth, unctuous eschallot puree, caramelised whole eschallots, crisp enoki mushrooms and the sort of seriously sticky jus we saw in restaurants everywhere 15 years ago. It all feels a bit stuck in the early 2000s, actually, as does much about the food here – balsamic pearls with your salmon, anyone? Still, it tastes great regardless, so we’re going to chalk it up to preemptive nostalgia.(Those who can afford to buy a house in Cremorne aren’t often entrepreneurial twentysomethings, anyway. Barrel knows its audience.) Make like Gordon Gekko and order a glass of the ballsy Malbec Accuro to accompany it.

A “broken lemon tart” references Massimo Bottura’s dessert at Osteria Francescana in Modena, currently number two on the fabled World’s Top 50 Restaurants list. It’s a daring move which sets itself up for a fail – it can’t (and doesn’t) stack up to the original. All the same, this is still a delightful dessert: a big, refreshing splodge of lemon curd with butter biscuit crumb and meringue shards that goes beautifully with a creamy, nutty 2012 Muscat Beaumes de Venise from the Rhône in France.

The interior ­– all blacks and greys – isn’t much to talk about, and some work in that department wouldn’t go unappreciated. Stairs line one wall of the main dining area, and, after questioning why people in fitness gear keep jogging up and down them, we realise they lead to… a gym. It’s a tad off-putting when you’re stuffing your face with excellent food.

So next time we’ll sit in the bar up front, where we can see all the action from the kitchen – where they’re creating some seriously exciting food. Plus, the guys out front are proffering some of the most interesting drops in town. Been angling for some new reasons to head over the bridge? Tick. Tick. 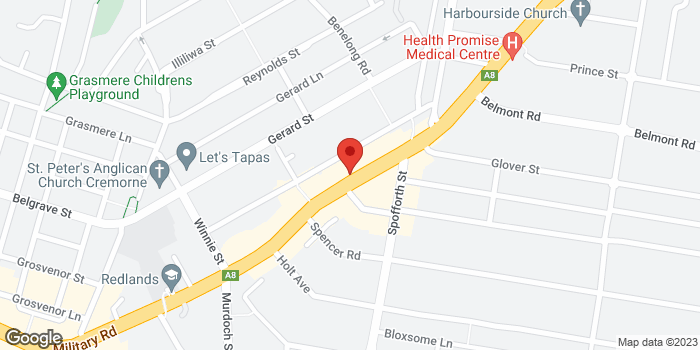