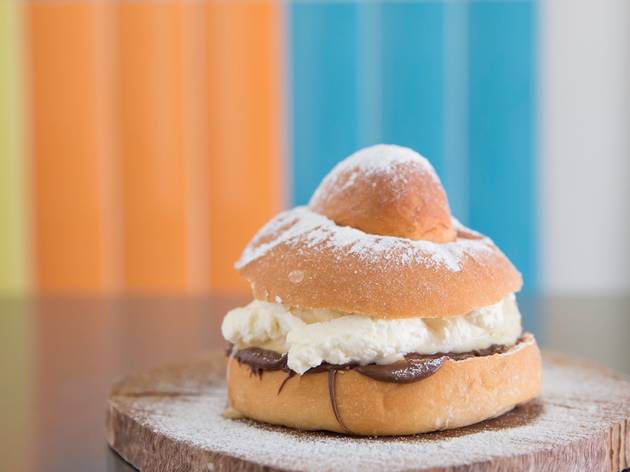 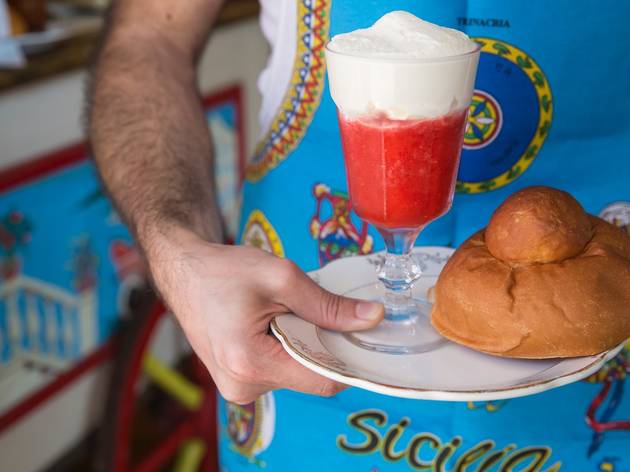 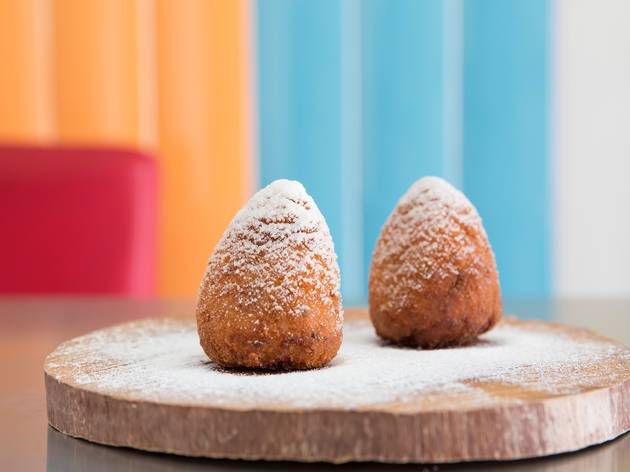 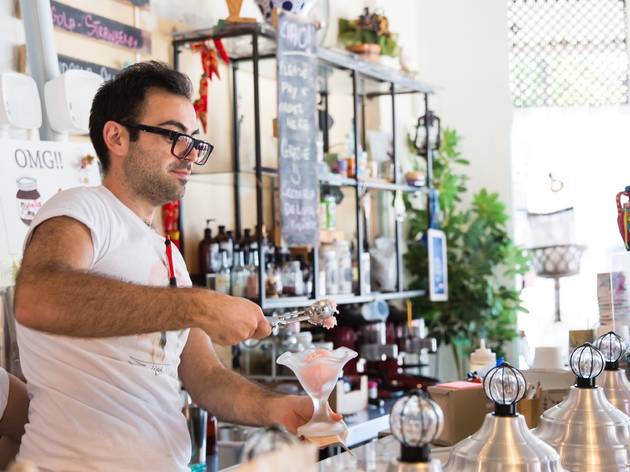 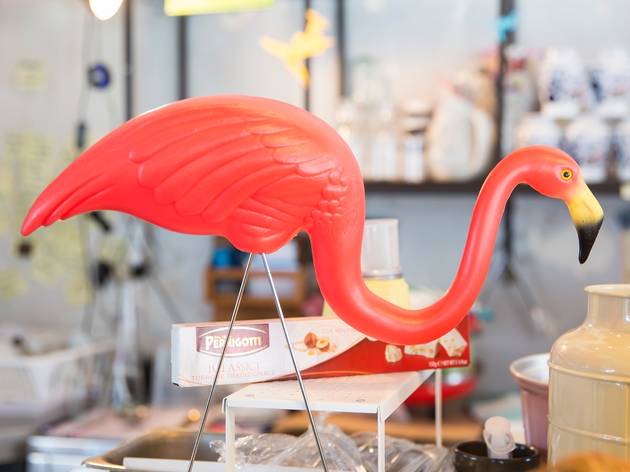 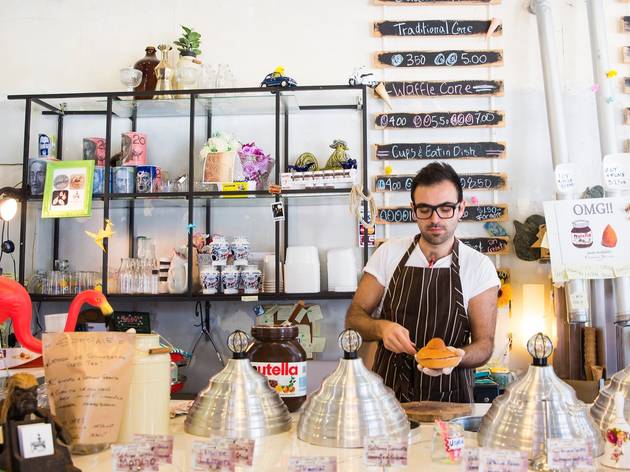 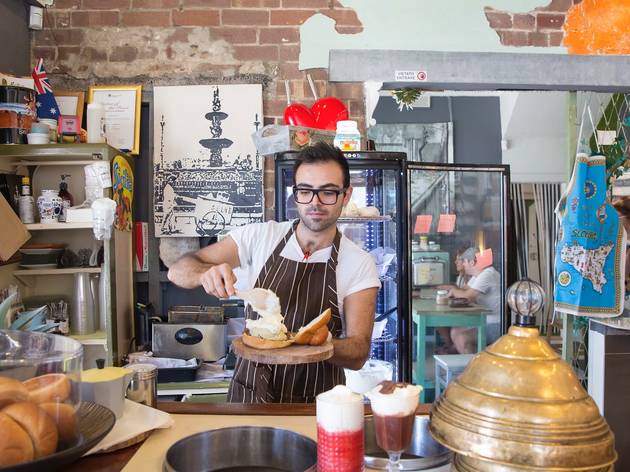 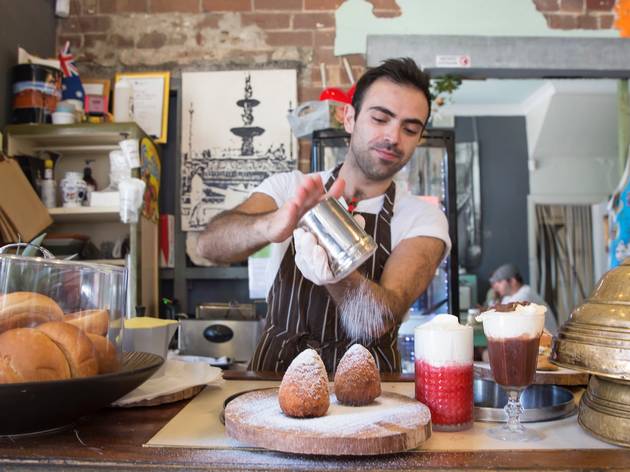 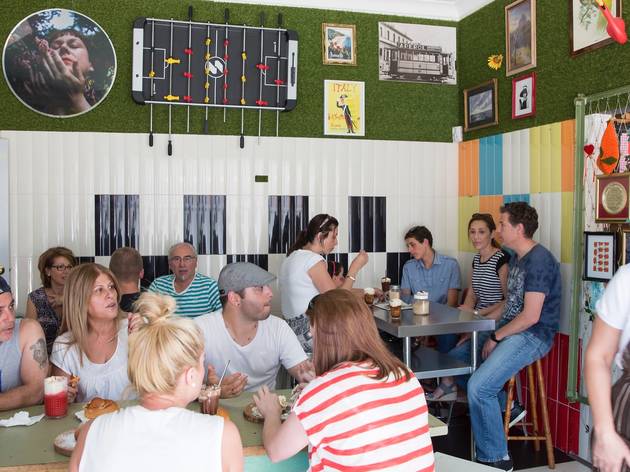 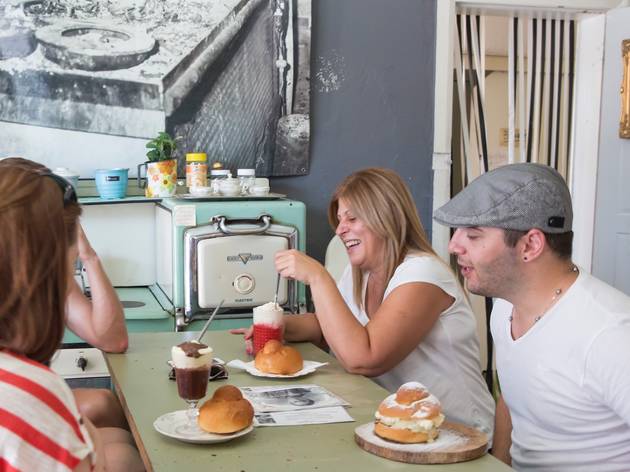 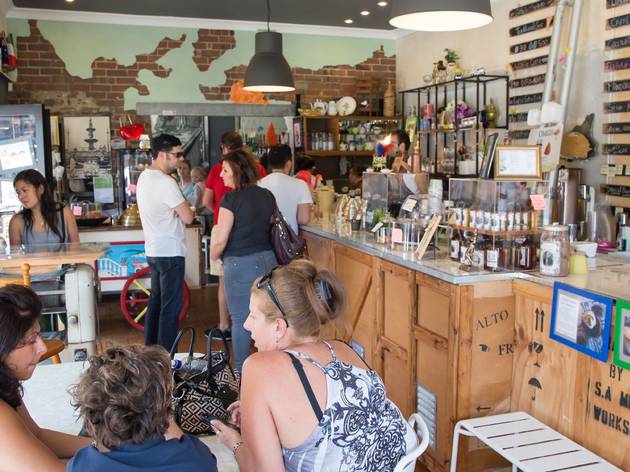 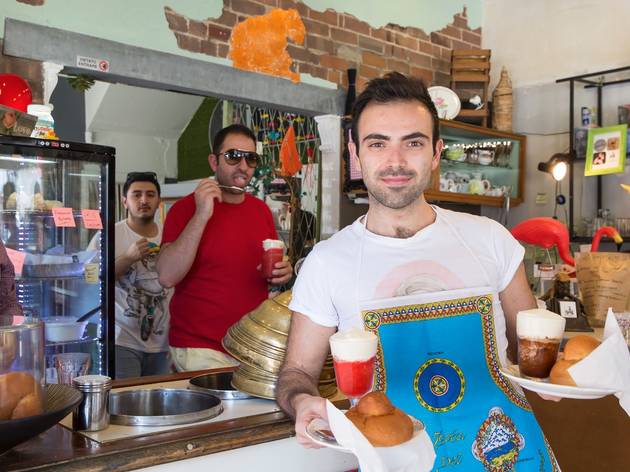 It’s the creaminess and the flavour. And the sheer fact they’ve been doing it for a really long time. The famiglia de Luca has been making gelato since 1937, and became a staple on the Sydney treat circuit in the mid-90s.

In 2011, they moved their business from Leichhardt into Five Dock, swapping the little shopfront for a café serving a menu of stick-your-spoon-up-in-em hot chocolates, house made syrups (try a bright green peppermint lemonade iced with a scoop of lemon sorbet), a few cakes and a daily savoury.

At heart, though, it’s all about the five star gelato here on this sleepy street corner. There’s coffee (it’s OK) and a pretty delicious risotto ball filled with ragu and peas and bits of melted cheese deep-fried to a dark bronze but that’s not what causes the massive queues on a Saturday night.

That’d be the gelato burger. Get yours with the lot: two scoops of ice cream (we go for cinnamon and Italian custard) and whipped cream sandwiched in a brioche bun spread with Nutella. The first bite is definitely the messiest: the insides have a habit of oozing out the sides, covering every surface in a pornographic mix of spiced gelato and blobs of cream. Rip the top off your bun, and use it as a makeshift spoon, swiping the spillage as you go. This is definitely one to eat sitting down.

Unlike the Nutella granita, which can be eaten just about any way you’d care to. There’s the option to cover your choc-hazelnut ice with cream and a spoon of Nutella on top, but the soft flakes are so good on their own, it feels a little like larding the lily. You can also get those arancini with (yep) Nutella if the savoury version doesn’t float your boat, or - hold the phones - just order a plain scoop of gelato in a cone.

No gimmicks needed here, just skill and flavour. De Luca’s zabaglione is an egg-rich thick custard gelato that resembles a classic vanilla ice cream (the difference between ice cream and gelato, in case you were wondering, is gelato doesn’t rely on as much dairy fat, is served slightly warmer and is churned slower giving a denser, less airy result).

Sydney likes nothing better than to line up for gelato. Us? We hate lining up for anything. Leave Saturday night to the locals and make your visit a daytime or early weekday adventure. You’re more likely to get a seat at one of the Laminex tables in the little back room alongside the Early Kooka, or out the front where locals swing past yelling greetings through the front door.