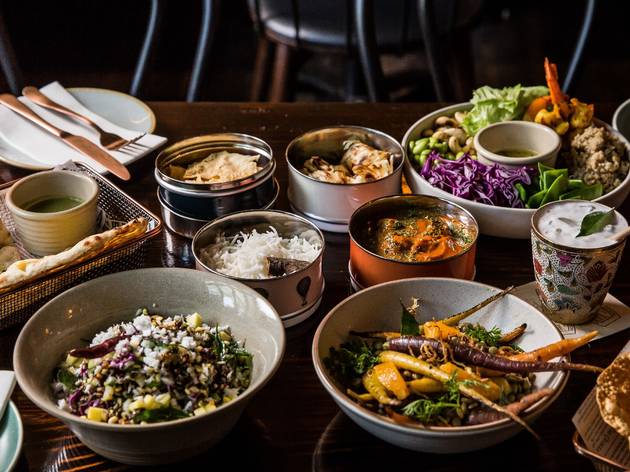 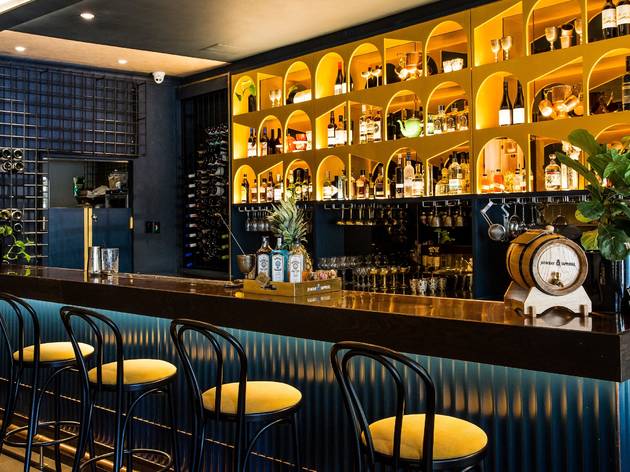 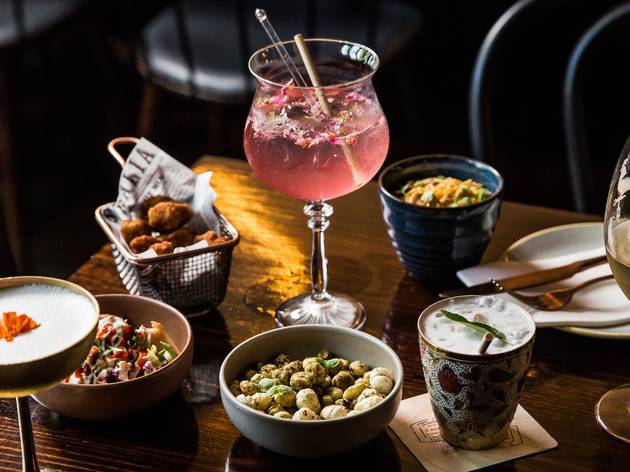 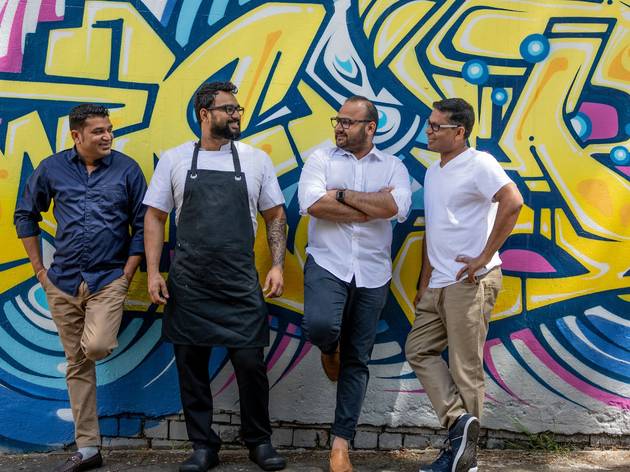 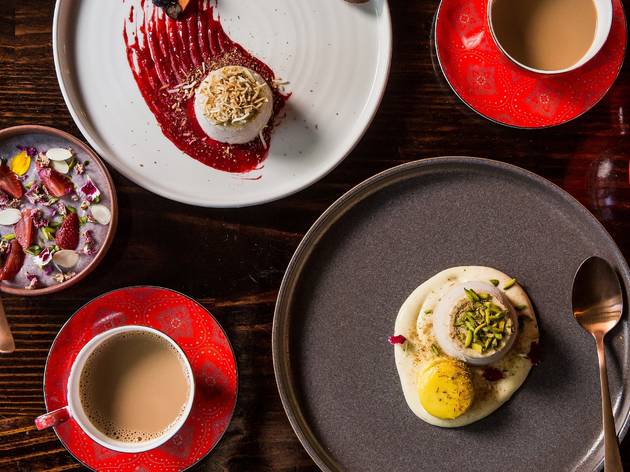 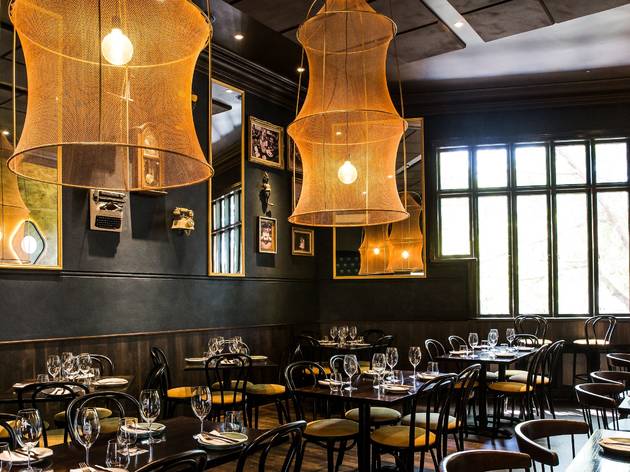 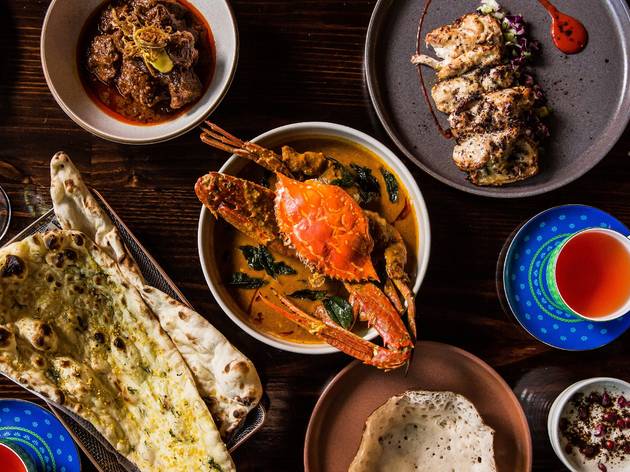 In the same way that pad Thai is no longer the sole spokesperson for Thai cuisine in this country, and banh mi has shaken off the burden of representing all things Vietnamese, Gaurang Gahoi is determined to free butter chicken from the pressure to perform.

Behind a gold pigeon embossed on a Surry Hills glass shopfront is a new eatery, the brainchild of Gahoi (ex-Four Seasons Hotel) and co-owners Javed Khan (Delhi O’Delhi) and Kunal Patel. Foreign Return – named affectionately for expats who leave India and come back home – is nixing the idea that Indian food is all creamy sauces, soft breads, and two-note spice blends, and putting 'lost' recipes back onto leather-bound menus.

“I don’t want to do the same thing you see on most menus,” Gahoi says. “Three curries, similar bases, naan, lots of butter. We’re mixing it up.”

Grandfather clocks hang on the matte, navy walls in the two-storey space that once held wine bar the Bishop. Old telephones with actual dials hark back to India’s colonial era, but there’s no misty-eyed colonial idolisation of the British Raj. The kitchen, helmed by Siddharth Kalyanaraman, the Australian men’s cricket team’s official touring chef, is all about shining the oil lamp on dishes from different corners of the subcontinent – without minimising their spicy multitudes or whitewashing their names to suit a Western palate.

Kosha moghsho, a slow-cooked Bengali lamb curry, swims with meat tender from sitting and stewing in its spices. A creamy kathirikkai kurma of soft, fall-apart eggplant takes comes out steaming, followed by a Chettinad-style curry topped with a whole crab, legs full of flesh to snap and dig out. Soft, tearable appam – popular in Kerala, Karnataka and Tamil Nadu – is another standout, made to sponge up spicy, coconutty curries. Distinctly South Indian dishes, which don’t often pierce traditionally North Indian-heavy menus, share the spotlight here.

But it's when you cast your eye down to the menu’s ‘lost recipes’ that you might start questioning whether you’ve ever even been to an Indian restaurant before, so different are they from the usual lineup. The lal maas, a venison curry, is tailored from a recipe once found in Rajasthan’s hallowed royal kitchens. The bottle gourd at the centre of the lauki mussallam comes stuffed with vegetables, with shaved almonds and paneer on top and distinct notes of nutmeg and cardamom shining through. From the subcontinent’s southern apex to its north-eastern climes, Foreign Return is covering its bases.

The ‘Foreign Return’ section of the menu is dedicated to Indian flavours spliced with a touch of modern Australian: edamame beans take the place of traditional chana dhal in shami, or fritters, while the mini uttapam (dense, rice and lentil savoury pancakes) are served with bush tomato chutney.

A meal at Foreign Return doesn’t have to be a three-course affair: come lunchtime, tiffin boxes are rolled out, stainless-steel tins twinkling in the midday sun. Follow in the tradition of urban city workers dating back to the 18th century and order a stacked lunch of eggplant, lamb or chicken to go. Just borrow a box and return when you're done (or come back for a refill tomorrow).

Or wander in off the street in the early evening and lean your elbows on the polished bar downstairs as you sip a Marigold Sour (a real, crushed marigold sits on top of a sweet, vodka-spiked concoction served in a gold goblet). The bar snacks are no slouch either. Masala nuts stirred through with tomatoes and microherbs are an easy option, or try fried taro root in a tart, moreish plate drizzled with tamarind sauce and millennial mint-coloured yoghurt. Mixologist Nitin Tewari consulted on the drinks list, which features punchy cocktails and light drops to undercut your spice-laden meal.

Gahoi has a lot in store for Foreign Return’s future – he’s set to bring out a ‘high chai’, collaborations with local distillers are in the works, and there’s even a whisper about serving breakfast. But from its long-lost recipes, to its nostalgic decor and its old-world approach to hospitality, this is a restaurant that also has one eye fixed affectionately on its past.