[THIS VENUE IS CLOSED] Inspired by China and executed by some of our best young chefs, this new Surry Hills eatery is bringing Crown Street back

[THIS VENUE IS CLOSED] For a while there, it seemed that Crown Street had lost its edge. But that was until Master, a new restaurant inspired by Chinese cuisine, opened. This is a place where the oldest member of staff is 28 (part-owner and head chef John Javier) but despite this, he and his staff (including part-owners Richard Borg, who is sous chef, and Jarred Roker of 212 Blu, who is on the floor) boast pedigrees that include Quay, Momofuku Seiōbo and Noma. Even our (excellent, informative, infectiously-enthusiastic) waiter Josh DeLuca worked under Peter Gilmore as a chef at Quay.

The scallop silk will tell you everything you need to know about why this restaurant is so goddamn amazing. Raw scallops have been compressed into thin sheets and then cooked sous vide for 30 seconds so that they are just cooked through. Served with salty, nubbly, oily XO sauce, they have the smooth texture of the finest flat rice noodle. It’s listed as a snack, but we could eat ten of these, they are that much of a joy to eat.

A signature dish of burnt cabbage is a must order. A giant wedge of white cabbage lands on the table, black and blistered on the outer leaves and coated in a fish sauce-infused butter sauce. The table goes silent while we eat it: the cabbage is meltingly, soothingly tender, the butter sauce plentiful and savoury, and the closer you get to the outer leaves, the more charry the flavour. It is a triumphant interpretation of a humble ingredient (Gilmore’s doing a similar thing at Bennelong), which makes us love it all the more.

The pork jowl is cooked to tenderness in Peking sauce for 24-hours and comes topped with sesame, layered up on a plate alongside one dish of pancakes and another of sliced cucumber with spring onions, fresh coriander and a little dipping pot of hoisin sauce. Think of this like Peking duck, but with pork. The pancakes are charred in places, soft and chewy in others. Pick one up and top with a slice of the super-soft, just-holding-itself-together pork, add in some cucumber, spring onions and coriander for crunch and spice, and drizzle on a little sauce for sweetness. Roll up; eat; and never want to eat anything else other than this, ever again.

That is, until you try the crab. Whatever is good at the market determines what sort of crustacean these guys will offer on the day. On the night we’re in it’s Balmain bug or spanner crab, and we go for the latter. They are cooked live and served in a hot black pepper and butter sauce – that’s it – meaning much of that flavour, the umami tones and oceanic voice of the sauce, comes from the crab shell itself. It’s almost bisque-like in its intensity. The crabs are already broken up for ease of eating, but we suggest asking for some implements anyway, meaning you can get to all those teeny bits of sweet meat at the tip of the claws.

Don’t be fooled by the two savoury-sounding dishes at the bottom of the menu: they are not sides; they’re desserts. ‘A roasted potato’ looks like its namesake and smells like a doughnut, but it’s actually ice cream flavoured with steeped potato skins, deep-fried in tempura batter and dusted with freeze-dried black vinegar. The filling is thick, starchy and very creamy, balanced by a pleasingly bitter bed of caramelised muscovado crumble with caramelised white chocolate. Another dessert of slightly tacky, vanilla-scented rice congee (more like a rice pudding) with crunchy caramelised pears and sweet, aromatic coriander oil is elegantly pared-back, but all bets are on that potato: like Pavarotti (a man who liked his carbs), it’s a hard act to follow.

As is the way of things in 2015, the wine list is biodynamic-focussed, with a Tom Shobbrook ‘Romanee Tuff’ syrah slightly sour, gently fizzy and refreshing, and the Eric Texier Côtes du Rhône ‘chat fou’ (‘mad cat’!) boasting a more traditional nose of cinnamon and clove, if the funkiness of natural wines aren’t your bag.

The two-storey interior has an Art Deco-meets-21st century monochrome vibe: whitewashed bricks, black tables and copper finishings. There’s noise insulation in the ceiling, which hugely improves the experience. It’s a genuinely beautiful space to inhabit for an evening, with service that is caring and knowledgeable, food that is challenging, delicious and surprising, and wines that help define what drinking in Sydney in 2015 is all about. How could we award this anything other than five stars? It’s as close to perfection as a mid-range restaurant could be. 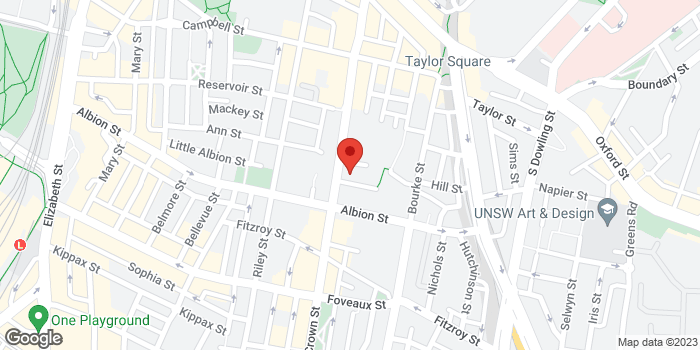