Stale shreds of dessicated coconut and sickly-sweet jam lining, no more: the resemblance between the school canteen lamingtons of yore and the ones perched on individual wood shelves on the walls of Tokyo Lamington is mostly only in name.

These lamingtons, made out the back of a light-filled store on Newtown's Australia Street, come wrapped in a pillow of blowtorched meringue and filled with an inch of yuzu custard, or rolled in crunchy, black sesame seeds and filled with a nutty cream, or in the form of a mint-green cube that tastes like a collision between chiffon cake and a matcha latte.

"My memory of lamingtons was not a great one, but I wanted to change that up," says co-owner Eddie Stewart. "It's all about the ingredients we use: we get coconut straight from the supplier, we add Heilala vanilla, we only use high-quality chocolate."

You might think of lamingtons as iconically Australian (New Zealanders may beg to differ) but Tokyo Lamington first found its feet outside of the dessert's homeland. Stewart (formerly of Black Star Pastry) and Min Chai (founder of N2 Extreme Gelato), the pair behind the brand, decided to test the limits of their idea abroad first.

The pair launched N2 Brunch Club in the increasingly trendy Nihonbashi district in Tokyo, which brought classic Australian breakfast fare (smashed avocado, corn fritters, breakkie burgers and the like) to a Japanese audience. But the most popular item on the menu? The lamingtons.

"We wanted to change our own perceptions of the lamington – it's so nostalgic," says Stewart. "And it really worked for a Japanese audience."

But as the founding pair's ambitions to expand Tokyo Lamington across Asia were just gaining steam, the pandemic struck, and they packed up and returned to Sydney. An opening for the old Black Star Pastry store on Newtown's Australia Street came up – fateful, given Stewart's years as a pastry chef and then in media and marketing for the brand – and they decided to roll with it.

"We've always loved Newtown. I used to work right here, in this shop – it feels like we've come full circle," laughs Stewart. "All the locals recognise Min and I. It's been great being back. Newtown just made sense for us."

Black Star Pastry's old signage is still on the facade of the building, and Chai and Stewart are still redirecting people looking to collect their order of the infamous strawbery-watermelon cake around the corner, to BSP's new store. "We're actually workshopping the idea of making a watermelon lamington," says Stewart. "As an homage [to Black Star Pastry]."

While Tokyo Lamington has now firmly planted its feet in Sydney with the opening of the Newtown store, it's not the brand's first foray into the Australian market. Stewart and Chai have infused lamingtons with native ingredients by Melbourne Bushfood, coated them in Koko Black's artisanal chocolate and even sandwiched them with Hello Auntie's beef red curry katsu. For half of 2020, they set up in a pop-up store in Haymarket. But the Australia Street store marks the brand's first permanent set-up.

"A lot of it was on the fly, design-wise," says Stewart. Reminders of Tokyo are suffused throughout the space. He points to the burnished black counter. "This right here is made through shou sugi ban, a Japanese way of preserving timber. It's burned and laquered, instead of treated with chemicals." Old world, ukiyo-e woodblock prints hang on the walls and long, plywood benches are positioned in the light of a huge, street-facing window.

You can currently try six flavours of lamington at the store (the OG; the Ferrero Rocher, the black sesame, the yuzu meringue; the Neapolitan and the vegan red velvet, with plans to expand to more), as well as three kinds of onigiri (bacon and egg, smoked salmon, and a kombu and shiitake variety) and three types of shokupan toast. Coffee is by Single O. 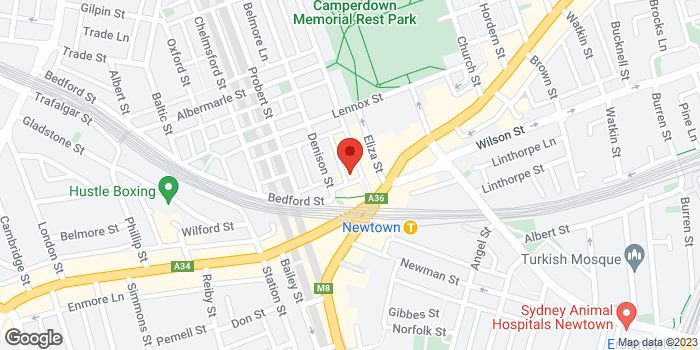