The New Blak: Meet the First Nations fashion designers rising to the top of their game

We speak to three inventive designers about storytelling, activism in fashion and what success looks like to them

For Denni Francisco, a Wiradjuri woman and creator of silk-printed label Ngali, success isn’t just measured in invitations to runway shows or industry accolades – not that she hasn’t had her fair share of those. It’s about showing up for First Nations communities. “The label for me gives the opportunity to share Indigenous culture and stories. I get to show who we are, not as seen through a lens of colonialism. There’s so much to celebrate about our culture,” she says.

Ngali, which Melbourne-based Francisco began in 2018, is all about simple, formless silhouettes splashed with the colours and dynamism of artworks by First Nations artists – most recently, Giji man Lindsay Malay, who Francisco met at the Aboriginal Art Fair in Darwin. She was struck by his paintings, followed him out to country, and so began their creative partnership. Francisco’s label also supports First Nations communities more directly: as part of the Buy 1 Give 1 Business for Good initiative, each purchase of a garment goes towards giving access to education, IT and literacy skills for youth in remote Aboriginal communities.

“I measure Ngali’s success on what it means for the remote Indigenous artists we work with, what it is we can contribute to educating our kids in remote communities, and the ability for us to share our stories and celebrate who we are,” she says. 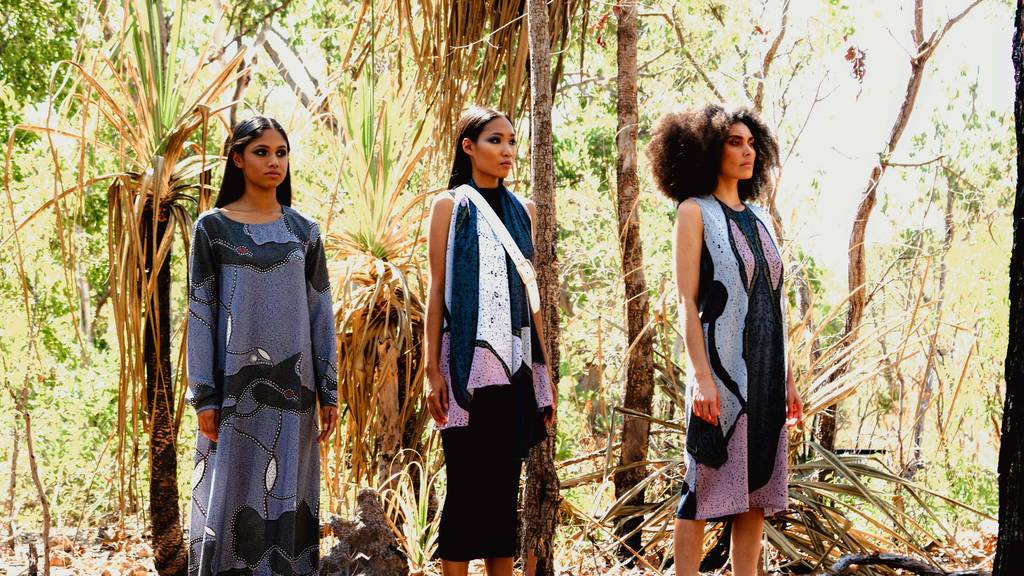 Like Francisco, Tahnee Edwards, a descendant of the Yorta Yorta, Taungurung, Boonwurrung and Mutti Mutti nations, and founder of Gammin Threads, creates clothing that reflects her community back to itself.

Edwards was inspired to start her streetwear label, which uses bold splashes of colour and oft-memed images and phrases particular to Aboriginal culture, such as the ubiquitousness of Keen’s Curry Powder in kitchens and a propensity for skinny ankles for example, when she began working at an Aboriginal women’s domestic violence and legal service. She began observing the power and resistance of black matriarchies in play and she credits the women who “hold it down, who get shit done, so often without a lot of support” as forming the backbone of her label’s message.

“With activism, everyone’s got their own lanes. And this is my own little lane," she says.

But what is activism's place in fashion? International luxury brands have enacted politics on runways, from Missoni’s pink pussy hats following the 2016 US election to Dior’s $700 tee which proclaimed that ‘We Should All Be Feminists.’ But there are inherent contradictions in these acts of activism – namely, that only the highest socioeconomic echelons of society can begin to afford garments professing messages of equality and solidarity, and that they borrow motifs and words popularised by women of colour. ‘We Should All be Feminists’ is, of course, the title of Chimamanda Ngozi Adiche’s book, and pussy hats were first created by two Los Angeles friends and knitters.

These rising First Nations designers, however, aim to centre their community in their work.

Edwards is highly attuned to the provocative impact that political messaging, shrouded in zany prints and hipster-friendly streetwear, can have. “I love typography, I love being cheeky. A lot of the stuff I do is like an inside joke – if you get it, that’s great. If you don’t, you can ask the question and start a really important conversation.” 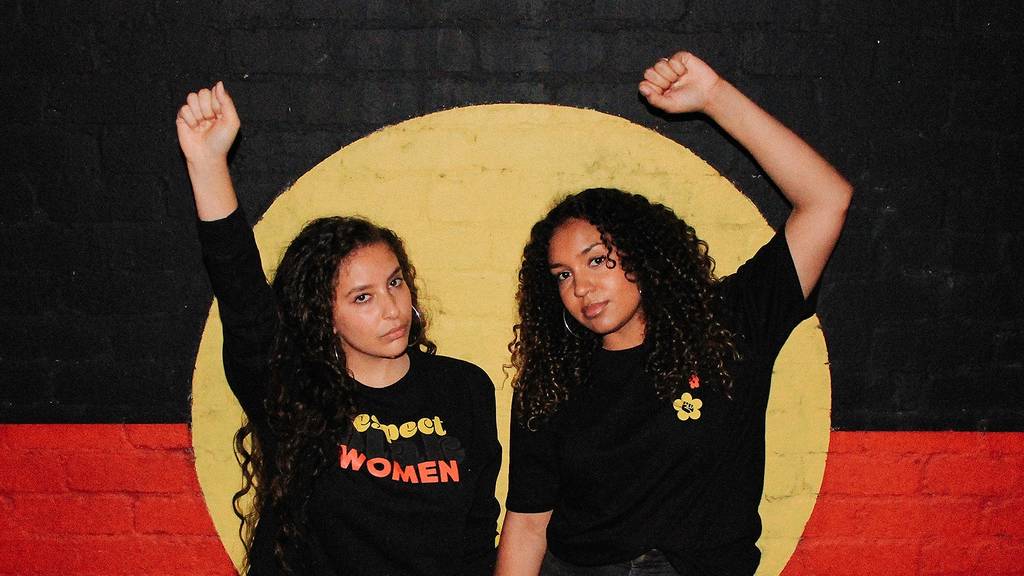 Edwards sees the dual weight and opportunity of her work. “Being a blackfella, you are representing your community,” she says. “You’ve got a lot of pressure on you, and people are watching you. The stuff that I do, I’m just trying to put across my points of view and lived experiences."

Having started her career in the world of fashion merchandising, Edwards also understands the complexities of creating a brand with just three per cent of the nation’s population in mind.  While debates dance around the fine lines between cultural appreciation and appropriation, her desire to broaden the scope of her brand is part of the reason she wants her clothes to be worn not just by First Nations people, but by allies, too. “Heaps of people don’t feel strong enough to speak up – they worry they’re going to say the wrong thing,” she says. “But if you just wear a shirt that supports blackfellas, or the LGBTQI community, that shows that there’s a lot of support out there, and shows others that you’re an ally.

“I create with mob in mind,” she says. “Other people can wear my stuff, but that’s who I’m thinking of when I’m creating."

But of course, fashion is still a consumer-led enterprise that needs to maintain some level of financial viability. For Francisco, even this aspect of her brand is framed in terms of her community. “The money is important, of course it is. I want to be a financially profitable company so that First Nations brands and designers can follow closely behind.”

Shannon Brett, creator of Lore and descendant of the Wakka Wakka, Butchulla and Gurang Gurang peoples, is also guided by questions of how she can pave the way for the future of First Nations creativity.

"My hope is that I can show our mobs that if I can do it, you can too. I want to bring as many creatives as I can along for this journey, to showcase just how deadly we all are," says Brett, whose label focuses on bright, punchy pop-art reminiscent prints on cotton dresses, skirts and tops. Violet watercolour smudges bloom on black pants, fruit-like prints dot yellow dresses, and movement and wearability are key.

For Brett, questions of identity cannot be wrenched away from the reality of being a First Nations designer living and working on colonised land. "My designs... respond to the way that I am navigating my journey as an Aboriginal person," she says. "The mere fact that you can express your own stories or the stories of your people on garments that you wear (that cannot be unseen) proves that you have a voice outside of the Museum/art gallery/protest rally.

"You can create change through fashion and the best change is that of successful Aboriginal and Torres Strait Islander people, making their own way in this industry and being the role models that our next generations so critically need, while sharing their stories to an international audience."

Francisco embraces the freedom that comes with operating outside of the traditional spheres of success. “I think optimism is in my DNA, “ says Francisco. “Growing up on country, there is that sense of freedom. I think it really just is the opposite of the Eurocentric way of doing something. We find creativity where we find creativity.

While the fashion industry has historically been encouraged somewhat artificial divides between the political and the aesthetic – one only needs to point to the agnosticism of high-end houses when it comes to using fur, the lack of accountability for the industry’s egregious waste output, or the general feet-dragging in conversations about diversifying runways – these designers are showing us that you can have real impact.

Francisco attributes her ability to create impactful garments and maintaining a distance from the cyclical pressure to produce in the fashion industry to a certain sense of freedom that she feels, as a First Nations creative.

“I guess we as First Nations people work outside in inverted commas, how things ‘are done’, or ‘should be done’.

“I think as an Indigenous person, there is a connection to the ancestors we feel guided by. It’s like an invisible support... that’s why we feel like we have that freedom. As a culture, I think we just see things a little bit differently.”

In a landscape where First Nations stories are more often represented through the lenses of trauma and violence than of flourishing, unbridled creativity, fashioning objects of beauty is a form of activism. It's important for Tahnee Edwards, though, that non-First Nations people don't consider their work done by just buying a t-shirt, or spending money on a brand which furthers childrens’ education.

So how can people be better allies? “Your allyship goes further than wearing a t-shirt. You’ve gotta do the work, too,” says Edwards. And what does that look like? “Read the Bla(c)k authors, go to the rallies, pull up your friends and your family on the little racist comments, you have to do all that as well." 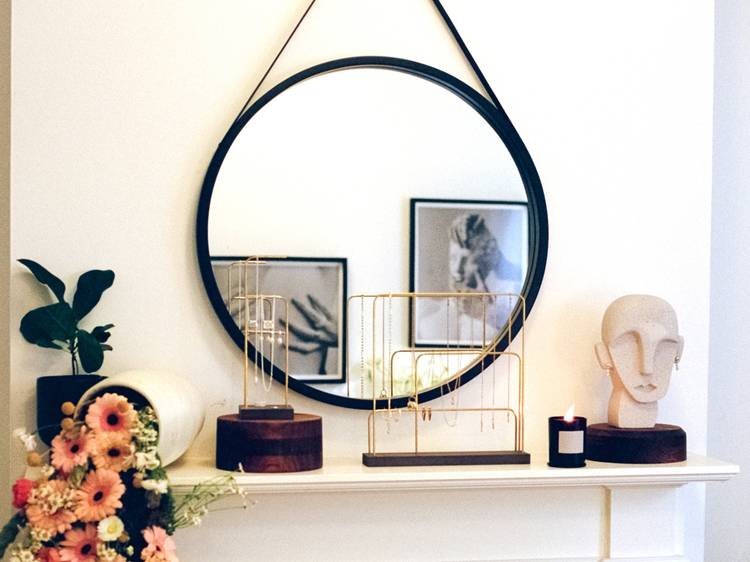 In the heart of Surry Hills, just up the road from Central Station, a matte black plate hangs on a Victorian terrace facade, bearing Holly Ryan’s name embossed in gold. “When I put it up, I cried,” she laughs. Beyond the threshold is the Sunshine Coast-born jewellery designer’s first showroom, and it’s as if she still can’t quite believe it exists – despite having created the brand ten years ago, when she was just 21.