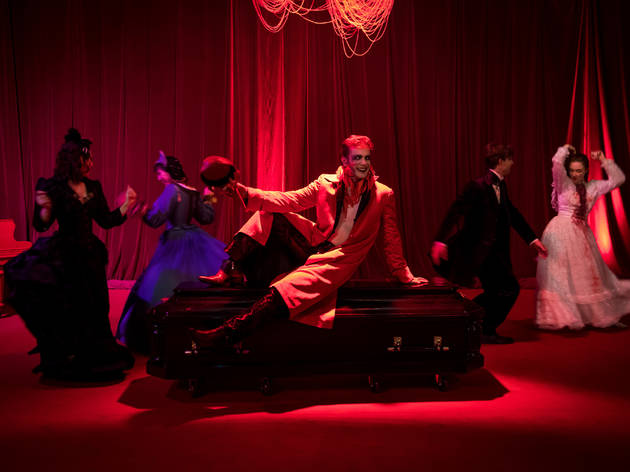 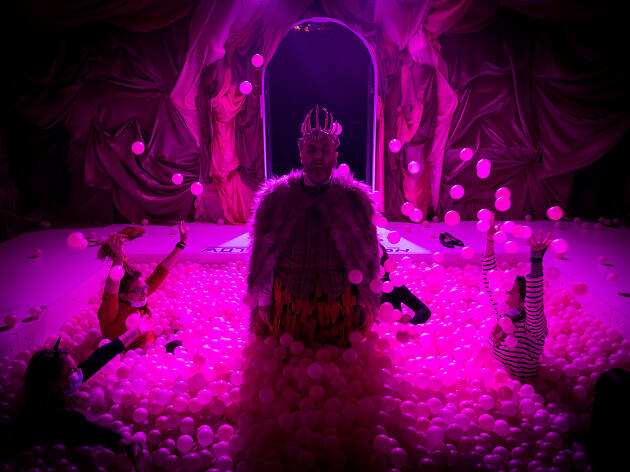 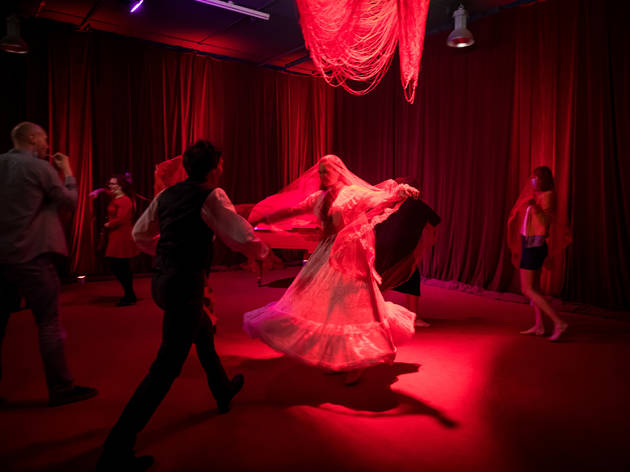 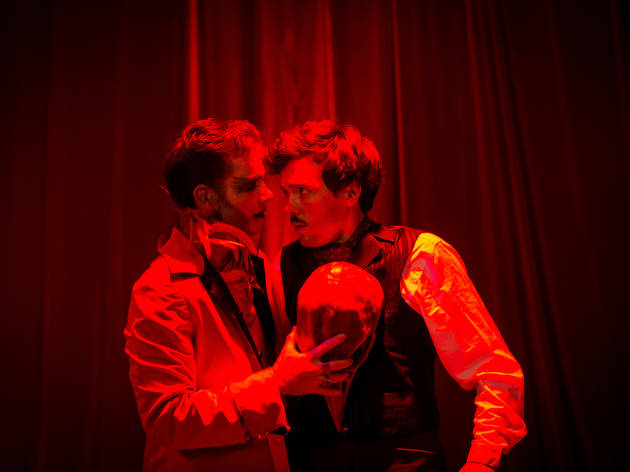 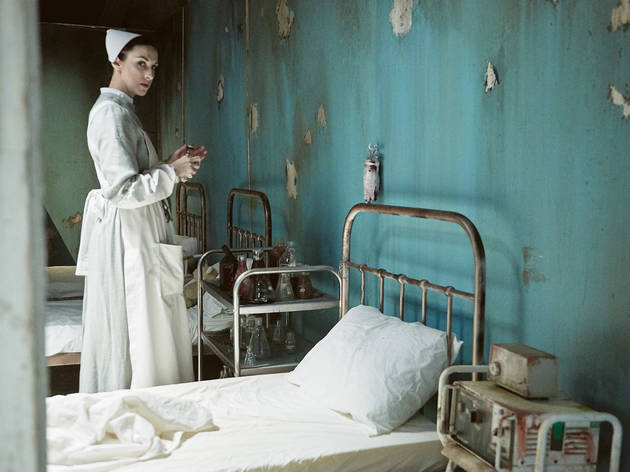 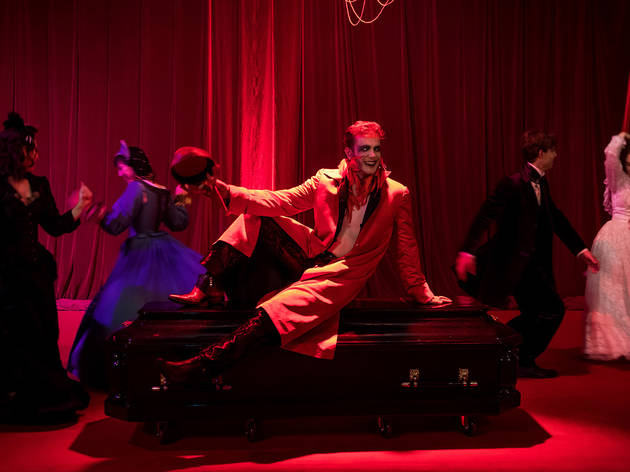 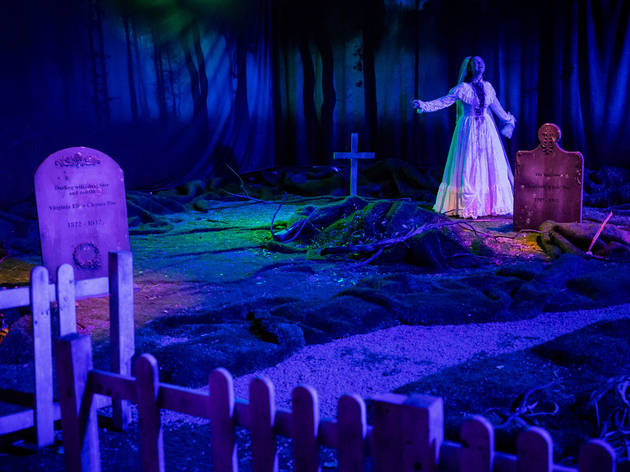 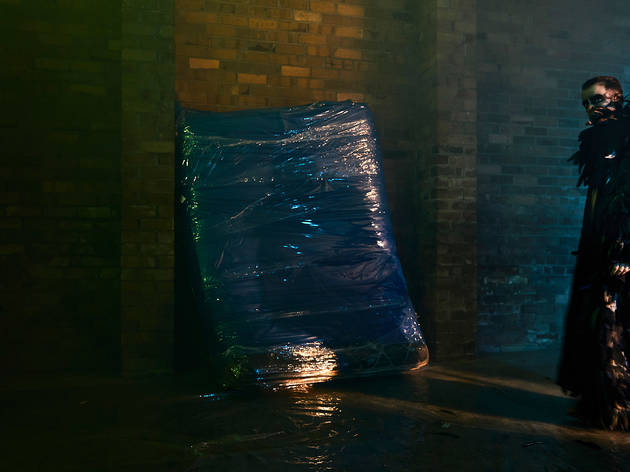 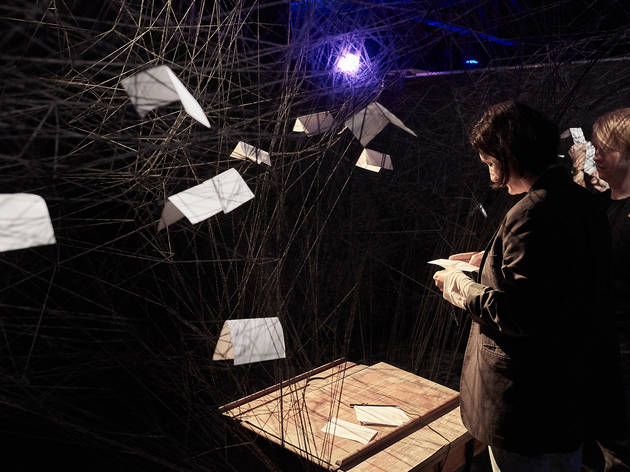 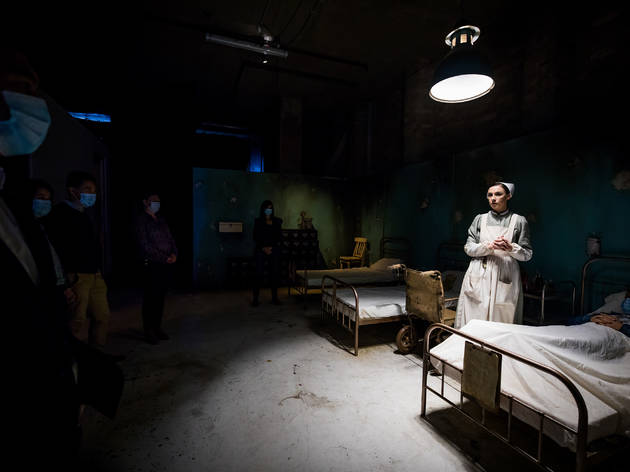 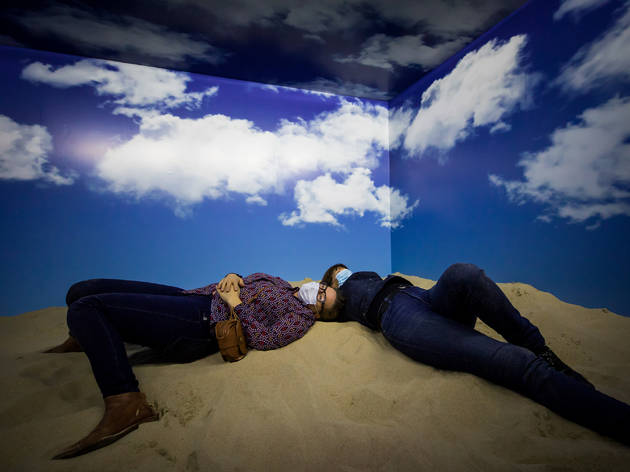 At first glance, the building – an old business furniture showroom situated between a rubbish-truck rental and a hipster coffee shop on the outskirts of Newtown – seems an unlikely place for a show.

But when you step inside, hand over your valuables and sign a safety waiver, it’s clear that A Midnight Visit is no ordinary show. This is an experience.

An Undertaker greets you and escorts you into this new, mystical world. You are warned that the residents you’ll encounter are strange and perhaps dangerous. You’ll be handed a surgical mask (no talking allowed). You might be separated from your friends – but you’ll find them again soon enough.

Now it’s time to pass over.

Based on the works of Edgar Allan Poe and populated with characters and scenarios you might recognise from this old-school goth (yes, there’s a Raven, and he and Poe have some serious sexual tension), A Midnight Visit is an exploratory playing space.

Over two levels, through winding corridors, secret passageways, and once through a magical, Narnia-style closet, you’ll be able to follow these characters through a world that’s a little bit horror movie with a dash of fun (an example: there’s a creepy church – but inside is a ball pit).

A Midnight Visit owes a great deal to Sleep No More, the immersive, abandoned-warehouse theatre experience whose take on Macbeth transferred from London to New York in 2011, where it has remained open and inspires a fanbase of dedicated, triple-digit repeat viewings. A Midnight Visit’s narrative structure, many of its spaces, clues, and cues, feel like an indie homage to this phenomenon.

But as an independent production without tens of millions to spare, A Midnight Visit is a remarkable achievement. Directed with panache by Danielle Harvey, it engages all five senses (scents are cannily deployed in different playing spaces), allows audiences space to explore and make the night their own. It might be a bit corny, but there’s a hint of a thrill in the air.

You can follow any performer that takes your fancy (spend enough time with the actress who performs famous death scenes for your applause long enough and you might even get to ‘corn nuts’) and take your time exploring the various rooms. There are ‘easter eggs’ like notes and clues in drawers, behind portraits on the walls, and on medical charts, so your curiosity will be rewarded. Resist the urge to stick with the group. This is your night in a dark dreamworld.

The cast – Megan Drury, Caitlin Drysdale, Bri Emrich, Drew Fairley, Jonny Hawkins, Bobbie-Jean Henning, James Raggatt, Hannah Raven, and Jason Winston – are committed, ethereal, and engaging, and they beckon to their audiences with such command you might find yourself, as this critic did, as a dance partner, waltzing with spirits.

The narrative structure of the show itself lacks clarity, and A Midnight Visit is at its least successful as a piece of theatre – but taken on an experiential or variety-act level, it has plenty of delights: a little Lady Gaga and Pink, a spooky nurse, that Tell-Tale Heart beating under floorboards, a creepy room constructed out of stuffed animals. Take it one moment at a time and divest yourself of the story, or devote yourself to solving the warehouse’s mysteries – these two extremes will yield the best results.

With A Midnight Visit, it’s okay to let the story be second to the experience – to the simple pleasures of finding yourself in an unexpected crawlspace, of carefully looking through a doorway with bated breath, of suddenly looking at a beach in the middle of an old, repurposed building. It won’t be like any other night out.

Already been to A Midnight Visit? No two visits are the same, and repeat visitors are more than welcome before the season wraps up in December.