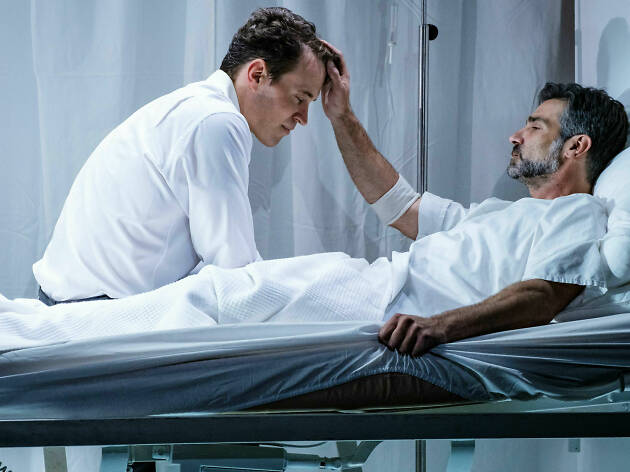 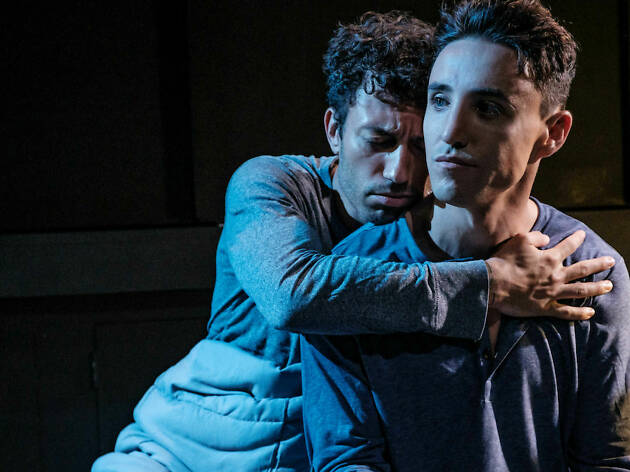 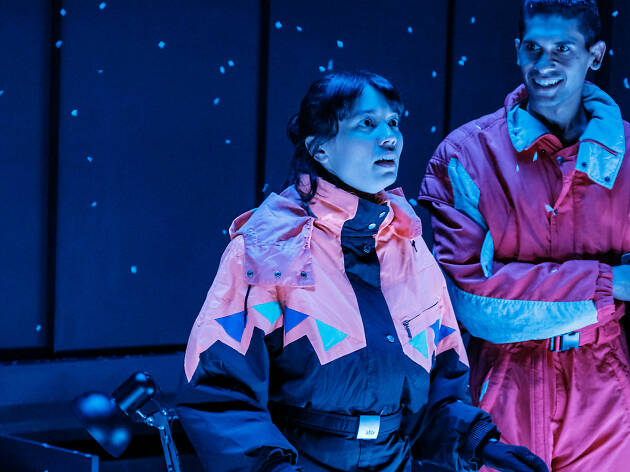 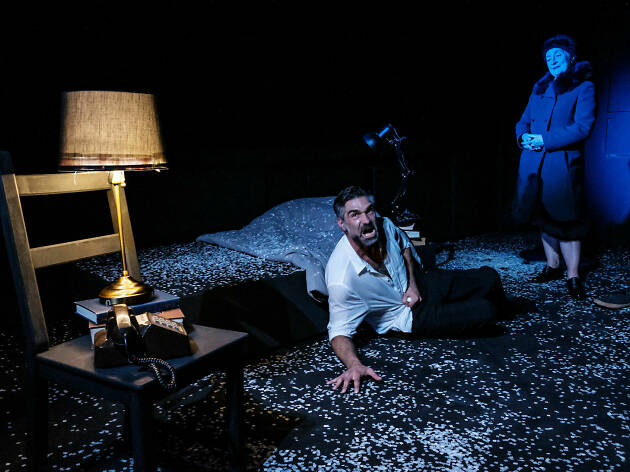 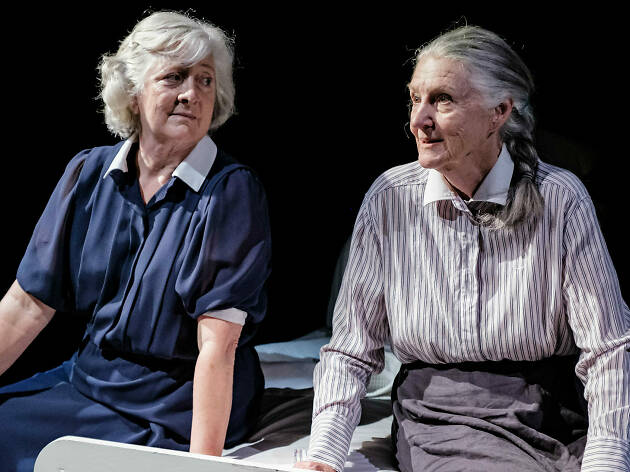 You could almost reach out and touch them.

Angels in America is a theatrical epic that has become a cultural touchstone. Tony Kushner’s dizzying, achingly poetic work is huge: comprised of two parts over seven hours and subtitled as a ‘gay fantasia on national themes’. It is included on virtually every list of the last century’s greatest plays, has been adapted for HBO and revived frequently on major stages. Its legacy has begun to feel untouchable – too grand, too important – to feel like a small revolution.

But here, at the Old Fitz, it belongs to us again: those of us alive right now in these times of conservative power and despair. That is the quiet, self-assured secret behind director Dino Dimitriadis’ approach, which plays in a 60-seat theatre inside a pub basement. This production isn’t above us, but of us – we are close enough to the work again to see our own reflection in it. It could crack you open.

It’s 1985 and Prior (Ben Gerrard) has been diagnosed with AIDS; his lover Louis (Timothy Wardell) leaves him, anguished. Joe (Gus Murray), a Mormon Republican lawyer, is a mentee of the criminal, ruthless, Trump-mentoring Roy Cohn (Ashley Lyons). Joe is struggling with his sexuality, and his marriage to Harper (Catherine Davies) is in trouble. Harper is deeply unhappy and self-medicating with Valium.

And then Cohn is diagnosed with AIDS, and Prior is visited by an angel, and Louis and Joe crash into each other, and the play soars into something dazzling: an angry, funny, still astonishingly heartfelt excavation of trauma, persecution and the still-daring act of pushing forward and demanding more life.

Dimitriadis’ Angels is a work for 2019; it’s quieter, more considered and queer. His cast is colour and age conscious, bringing a group of talented, sensitive performers together. This company of actors feels bonded deeply to the tone of the production and the spirit of the work, and as a result, they feel fully-realised. Dimitriadis reveals the necessity of Belize (Joseph Althouse), Prior’s friend and Roy Cohn’s nurse, who moves here from a character sometimes played broadly with emphasis on comic relief to a wry, and compassionate, no-bullshit blessing. Davies’ Harper hallucinates but she isn’t hysterical; here, she is heartbroken but built on iron, rediscovering life. Dimitriades gives plenty of space for Harper’s journey through both Millennium Approaches (part one) and Perestroika (part two), and the play is better for it.

Gerrard’s Prior is droll and grave but still sparkles, and you’re probably friends with someone just like him; and Wardell’s Louis is obsessed with his own suffering, but aren’t we all now, overwhelmed on Twitter and reading the news? Don’t we understand this better now? His journey towards doing the hard work of love feels deeply recognisable in our often loveless landscape.

Jude Gibson is outstanding in her several roles, including an excellent, moving turn as Hannah Pitt, Joe’s mother. Her scenes with Gerrard’s Prior in Perestroika are a highlight. Althouse’s Belize is the soul of the play; Wardell’s Louis, then, is its overactive anxious brain, and when they are together, it’s electric. Murray looks like was born to play Joe, and does so with empathy and nuance. Maggie Dence’s angel could destroy you with limitless grace; she feels divine and malevolent all at once.

Ben Pierpoint’s sound design is poignant – the heralding flourish of angel wings and his sonorous score takes us beyond the tiny theatre – and Benjamin Brockman’s lighting takes us to heaven and toward new life with elegance. Jeremy Allen’s set is remarkably agile for the tiny stage; new shapes and spaces unfurl as the play does to give us more dimension and insight.

Angels ends in 1990, but we are still asking for the things Prior is asking for as he wrestles with his angel: for the right for vulnerable people to live freely, with rights and dignity. We still need Angels in America to give us space to grieve these things, to be angry and understood in our anger, and to find the rarest of things in these tough years: hope.

Dimitriadis is a director that reaches out in his shows with generous, loving hands, and in these seven hours – which pass easily and dreamlike, even with one interval excised from Millennium Approaches –  he and his company give us this gift of hope without hesitation. It’s exactly what we needed.