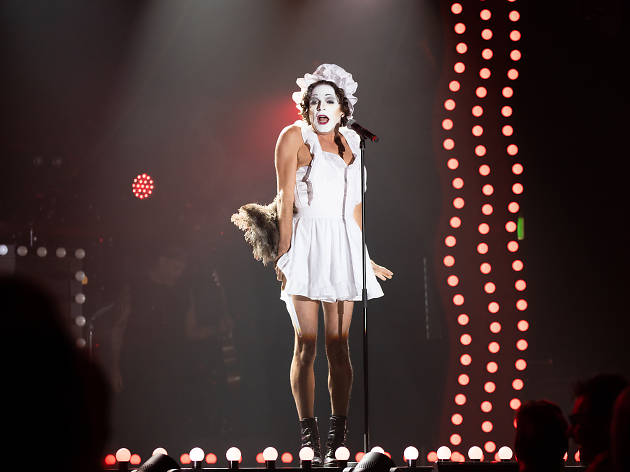 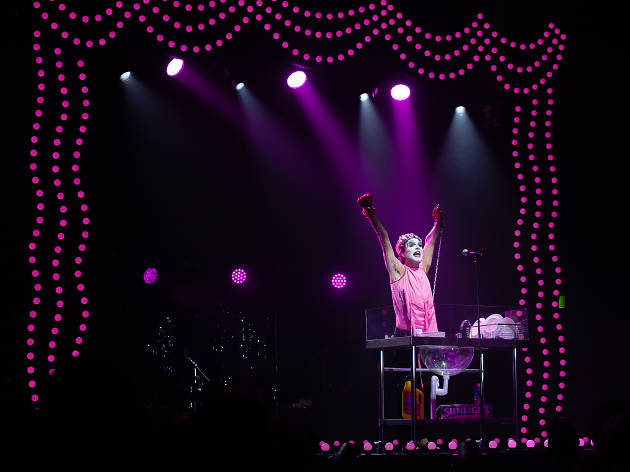 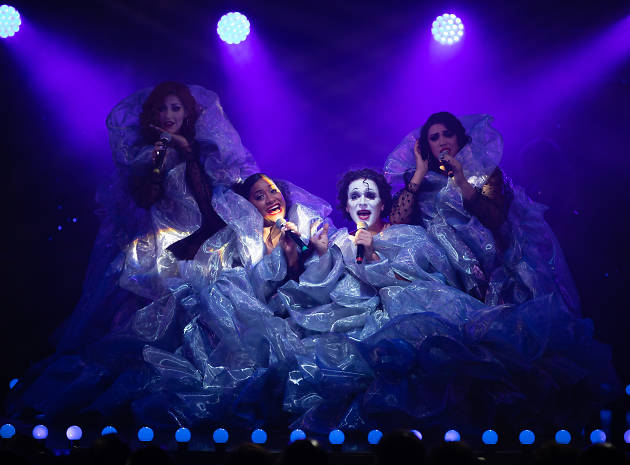 How do you make a subversive and titillating cabaret from 45 years ago feel alive again? That’s the task facing the team behind Betty Blokk-Buster Reimagined, a remixed revisit of Reg Livermore’s iconic European-style cabaret that ran for a now unthinkable eight months in Sydney before touring the country. At first, the mainstream press refused to cover the show – dismissing it as tawdry drag – but when they finally came, most reviews were the kind a performer can only dream about; one called the show ‘The best thing since rice bubbles.’ The cabaret was even professionally filmed and released for home viewing in 1976.

Now Betty, her cavalcade of characters, and the clown-faced, rock-inflected musical numbers that held it all together are back. Written by Livermore (some lines and musical numbers remain near unchanged from the ‘70s), Louis Nowra and Mary Rachel Brown, the performance torch has been passed to Josh Quong Tart. He’s electrifying to watch – he’s a darker, more cynical performer, trading Livermore’s gorgeous and startlingly emotional dance and often poignant performance for a shirtless, rock-god persona.

There’s still some vulnerability – surprisingly, in the form of Tones and I’s ‘Johnny Run Away’ – but there’s an edge here. One that doesn’t seem comfortable with youth anxiety or calls for respect in language. There’s a sense that older generations did being outsiders, or provocateurs, better. Which does make sense; this show is a nostalgic homage.

Still, the problem with revisiting this show is what you would expect – the world around it has changed, and so have the people. What shocked and sparked in 1975 is well-worn ground now; queer performance art has evolved and deepened in complexity; drag performers are idolised by straight family units via the worldwide phenomenon of RuPaul’s Drag Race. Betty is immediately defanged simply by contemporary context.

You see this most clearly in the skits, where the show seems to dig in its heels and defy context to honor its past. Even the most successful one – about Jane, who likes to complain, a mostly clever satire of conservative white women, ignores contemporary parlance that gives audiences a shortcut to the joke (she’s clearly a Karen).

Livermore himself says his show was successful because he took recognisable stereotypes and then upended them, which makes it all the more disappointing that this new Betty doesn’t. Everyone is who you would expect. Despite the fact that fat suits are cruel and outdated, one is used here – and, of course, the fat person is a villain. This doesn’t subvert anything. Even worse, that sketch merely consists of a list of derogatory terms used against women and queer people. Saying “bad words aloud” was part of alternative humour 45 years ago – a kind of release and reclamation – but we’re well past that now, and on the face of it, the sketch shows a man jumping through hoops to excuse bad behaviour in the workplace without a single spin on it. That’s just the world we live in; it’s reality for many women and queer people every day at work. If only there had been a twist to the joke.

Still, there’s a glimmer of something to keep you engaged. There’s a sketch about Beryl (an older one revisited), a housewife quite literally chained to the sink, that still has some real fire in it. Brian Thomson’s circus-ring set feels exactly right; Craig Ilott directs the hell out of the musical numbers; the band, led by musical director Andrew Worboys, is white-hot; and backing vocalists Kaylah Attard, Melissa Pringle and Elenoa Rokobaro are scorching (it’s a shame that, in 2020, the women still don’t get to speak, or play in the sketches, in this show).

The result is something mixed. It’s presumably a nice hat-tip to performance history past and trip down memory lane for those who were there; and it’s a stellar vocal performance by Quong Tart, but if you hunger for a satire to pierce the moment, for a work that makes you laugh and makes you ache, ultimately deflating.