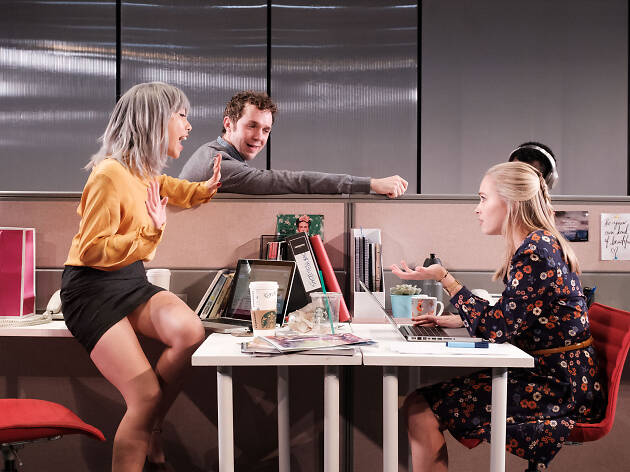 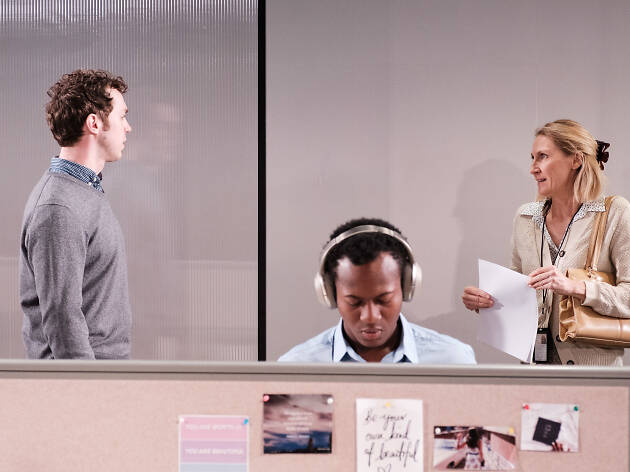 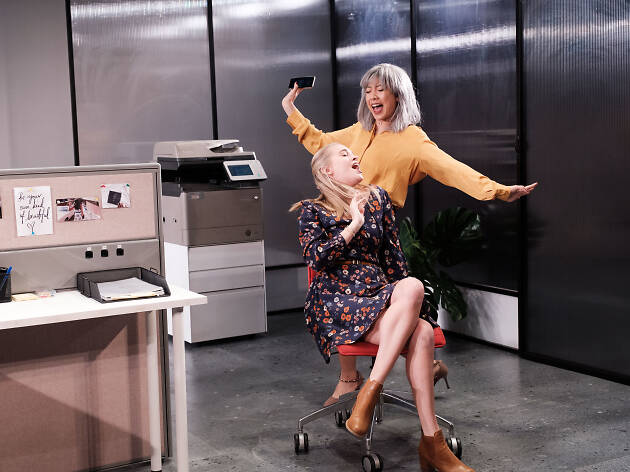 Gloria, by American playwright Branden Jacobs-Jenkins, ends its first act with a shocking twist that defines the rest of the three-act play. We’ve been asked not to spoil it for you, but it’s easy to write about Gloria without touching the spoiler: it’s a rich work of culture and cultural criticism disguised as biting entertainment-machine satire.

We open in a magazine office where the assistants of the culture section are all frustration, ambition, and un-fulfilment. This is stylised hyper-realism, lovingly built into Jeremy Allen’s set design; you can make copies on the machine in the corner.

It’s all too hard for the workers on this particular morning. The coffee machine has been taken out of the break room. A writing assignment that could have been within the assistants’ purview went to the web writer, who gets all the good pieces. Magazines are dead, maybe, and the intern wants their jobs, maybe. Their chatter frays the nerves of an overworked fact-checker. And hardly anyone went to Gloria’s house party. She’s the office outcast. Isn’t it so sad that she hired a bartender and everything for, like, four people?

Then the office satire, gossip and all, is shattered by the twist we can’t talk about.

Director Alexander Berlage has an eye both for wit and for keenly-deployed cruelty; there’s an archness to his production that keeps the script singing. His actors (Annabel Harte, Justin Amankwah, Rowan Witt, Michelle Ny, Georgina Symes and Reza Momenzada, mostly playing multiple roles) are giving sharp performances across the board, balancing caustic comebacks with guarded vulnerability.

And those actors are kept on their feet. After the twist, Gloria explores how the world has changed by splitting its world open and changing its environment: its realism, still eerie and thorough here, is as much of a construct as the stories the characters, old and new, are telling themselves about the event. You can make anything real if you get enough people behind you and put in enough effort, and you can transplant a Starbucks into a black-box theatre and we’ll all buy into the truth of it.

Facts are malleable in the hands of the powerful, which means the hands of oppressors; over the final two acts of Gloria, different takes on those facts, laced with personal experiences, are currency. Who ends up profiting won’t surprise you.

A boss becomes a hero. An experience becomes a pop culture obsession. Others aren’t so lucky.

Gloria isn’t a shock-and-awe play. At first it seems to be straightforwardly about work, and stress, and the way that work upholds and propagates unfair systems for workers, and the ways that culture writing uplifts some voices (those with the most capital, generally white) and discards others. It’s interesting that the characters are largely writers and creators, because middle-class society is created by those who are able to record it. It’s a play about the stories we tell and who gets to tell them – it’s the old adage that history is written by the victors – but it’s more than that.

The best thing about Gloria is that it’s about ambition, yes (the play was originally subtitled ‘or Ambition’), but beyond the micro-level of fame, prestige, and job advancement, it’s about the kind of ambition that tramples others: white supremacy and oppression, and the spin that transcends the games of politicians and publicists to make and break entire worlds.

Gloria applies the brutality of re-drawn borders, colonialism, and white-washing to a contemporary tragedy, contained and rendered near banal in the cycle of news and entertainment. In the script, tossed out like throwaways, are through-lines that remind us these ideas of identity and record-keeping are bigger than a magazine office or the world of publishing: a black victim is erased from a narrative; palatable tales of white motherhood and noble femininity override a play for narrative control by a woman of colour; a white guy uses his leverage as the ‘face’ of the event to bury his past racist behaviour with a non-disclosure agreement.

Everywhere you look in Gloria are trauma-infused, historically flawed factories of authorship: magazines, books, film. The only actor who doesn’t play a dual role is Momenzada; his character Lorin is, of course, a fact-checker. By the end of the play, he isn’t one anymore. His story doesn’t matter anymore. The world created a better one and sold it to anyone who would listen.