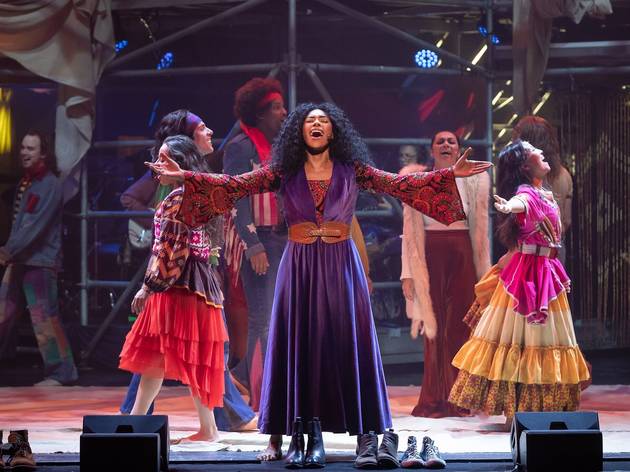 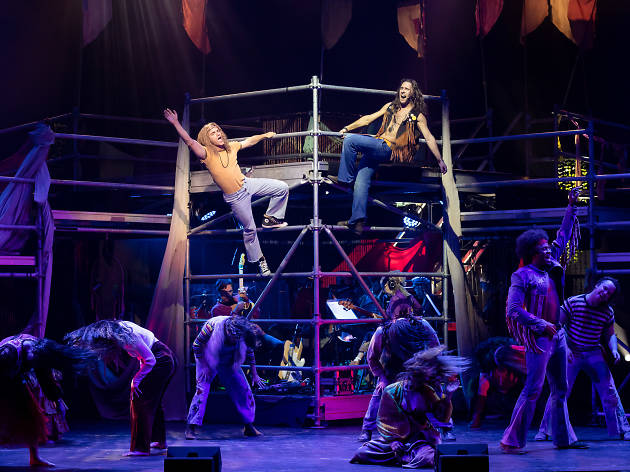 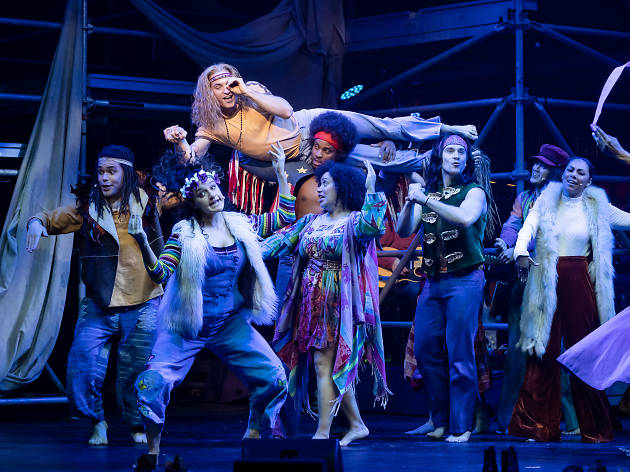 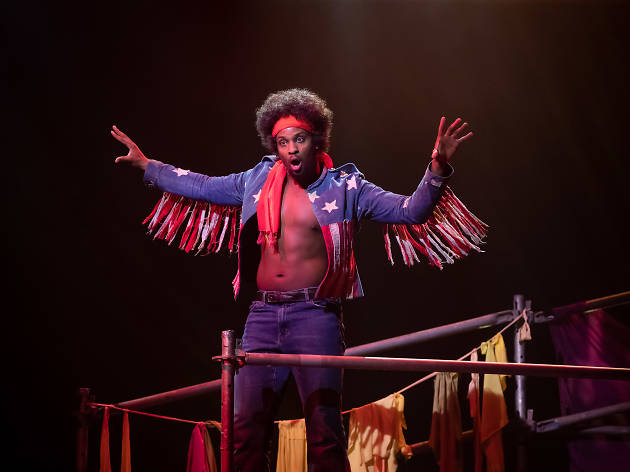 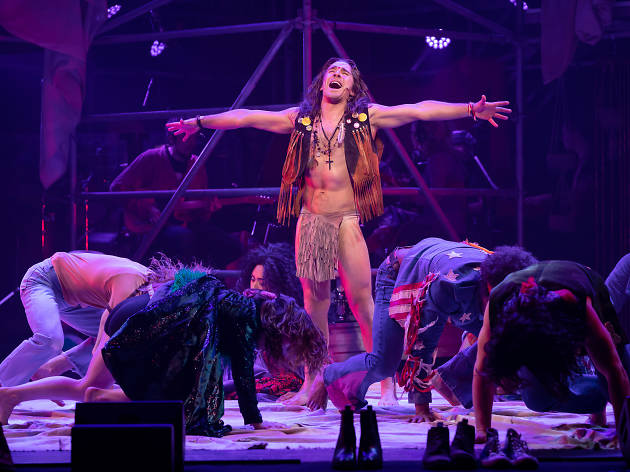 Back in 1969, when Hair landed in Sydney, it would have been laughable – even offensive – to think of it playing the Sydney Opera House. The show was still new, which meant it felt raw and immediate, and of its time. All dirty rock and filthy mouth – plus a now infamous nude scene – Hair ran for two years in Kings Cross but racked up a serious number of complaints. It was musical theatre, sure, but The Sound of Music it was not. It was for the young.

Fifty years later, though? It sits proudly in the Opera House Concert Hall, and the northern foyer is decorated with incense sticks and dreamcatcher-inspired wall hangings (there’s a bit about Hair that, these days, feels like cultural appropriation). It’s like walking into a Tree of Life.

Hair is more vibe and pastiche than plot, but there is one, loosely: meet a bunch of hippie kids who call themselves a tribe. Berger (Hugh Sheridan) is young and charismatic. His lover Sheila (Prinnie Stevens) is a college student and activist. Claude (Matthew Manahan), a sensitive kid who is hung up on both Sheila and Berger, receives his draft card in the mail. There’s a be-in. Claude has a bad trip.

The senselessness of war hangs heavy over Hair, which is to its benefit; without it, it’s all spectacle. But Hair is deeply concerned with the future of its youth, who would rather dodge the conscription draft and drop out rather than perpetuate a society they know is injust.

In director Cameron Menzies’ production, which is straightforward with a dash of time capsule, these heavier, plot-driving ideas linger in the background. At the front is rock (led by musical director Tina Harris), broad comedy that dips into a toe into caricature and, occasionally, the joy of a killer ensemble raising their voices in numbers that still soar.

Manahan sings sweetly as the lost Claude and Stevens is her most natural onstage yet as Sheila, while Paulini as Dionne and Harris M. Turner and Hud lend vocal – and personal – strength as the desperately needed ironic counterbalance to the  central trio. The score is still packed with undeniable bangers: ‘Hair’ is frenetic; ‘Walking in Space’ is beautiful, and Stefanie Caccamo sings a heart-stopping, gently funny take on ‘Frank Mills’, one of the most unusual and best musical theatre solos.

Amy Campbell’s choreography creates a pleasing dynamism onstage – these kids are mostly stoned but they’re as expressive as anything – and makes good use of Adam Gardnir’s set, all bare-bones and scaffolding. The production doesn’t spend a lot of time building its core relationships or letting emotional beats land for most of the production – though in the finale, you start to feel some dramatic heft, and it’s a welcome feeling.

Hair’s primary function – and the reason for its success – is that it gave to theatres the music, and abstract emotional turmoil, of its youth. It ushered in a vibe. The American musical exploded with rock operas and dipped a toe into hip hop and R’n’B, allowing itself to sound more contemporary – setting us on a path dotted with hits like Evita, Spring Awakening and Hamilton. Played 50 years later, you might find yourself wondering how this production could have tapped into the Gen Z counter-culture. Who leads the revolution now? Couldn’t this show be queerer (Menzies’ production steps politely around the text’s own queerness) and more gender diverse? What would it look like with trans or gender-non-conforming leads, or an entire cast comprised of people of colour? What if there were people with disabilities or people of different sizes raising a placard for equality? In Menzies’ productions, all the signs his cast hold aloft are empty, which says it all.

But there’s no law that says Menzies and his production need to look to the now while telling a story of the past, though you might argue that it makes work more resonant to its audiences, or creates a through-line from past resistance to the resistance of the present and what has or has not been achieved. Still every hippie that got a haircut and a real job would feel at ease at the Opera House in 2019, and this Hair, whether you’re a Boomer or not, holds pockets of joy. We give thanks to Galt McDermot’s score and the killer voices of this ensemble.