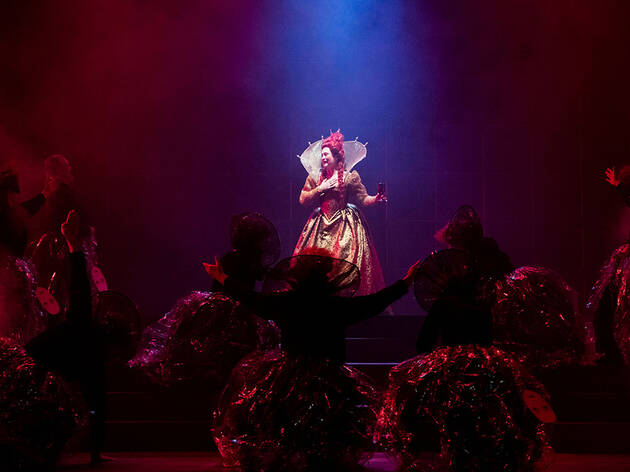 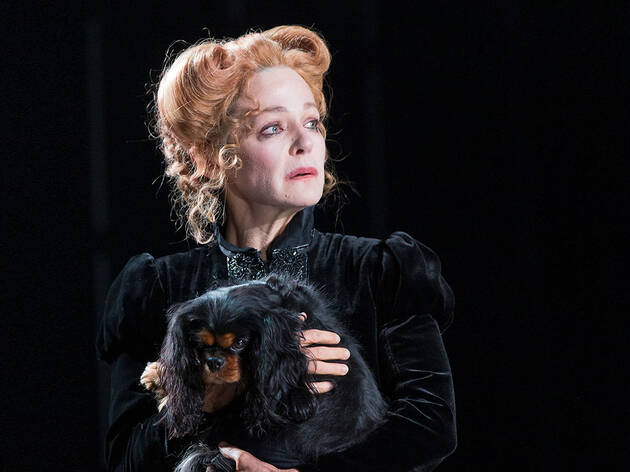 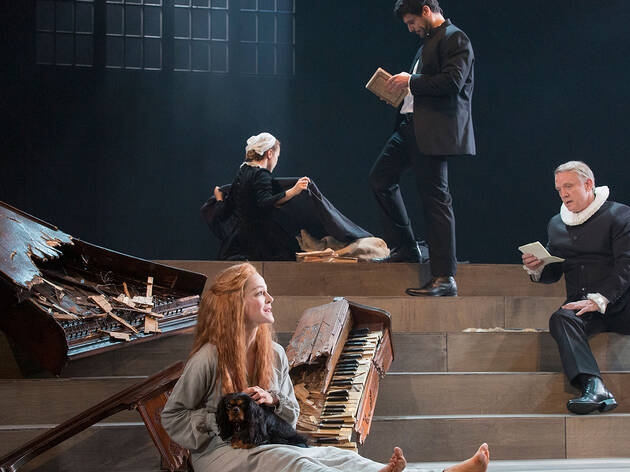 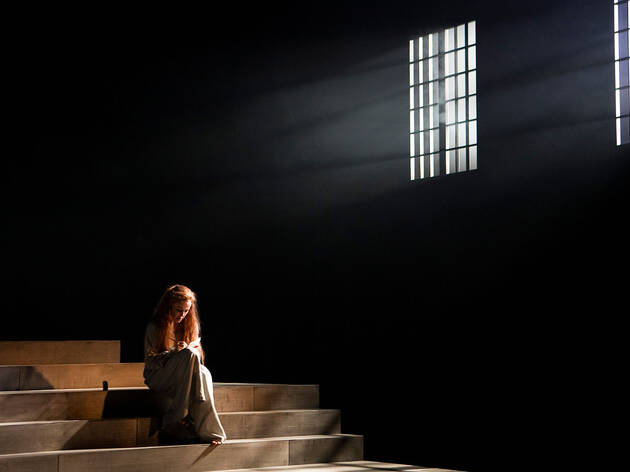 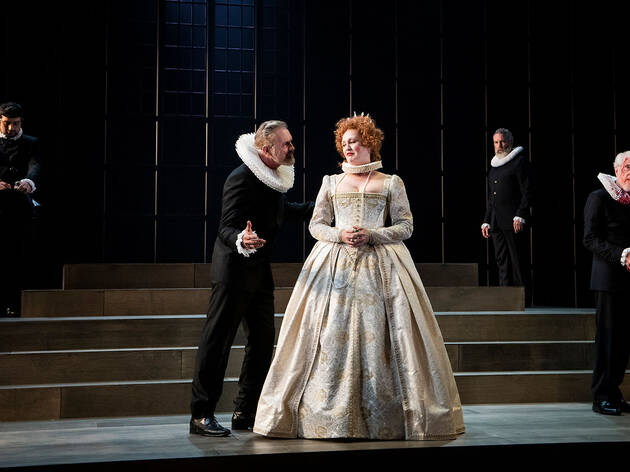 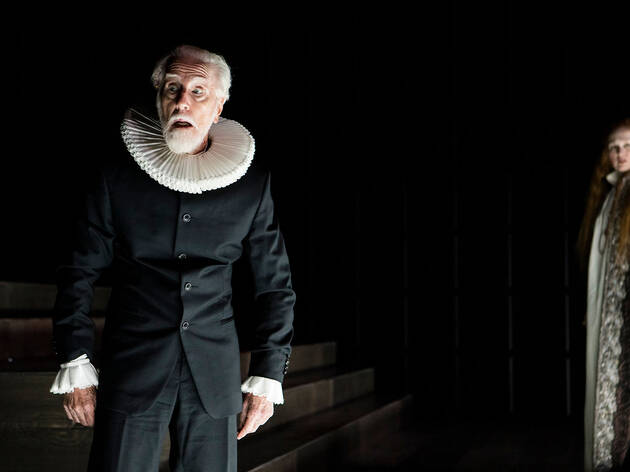 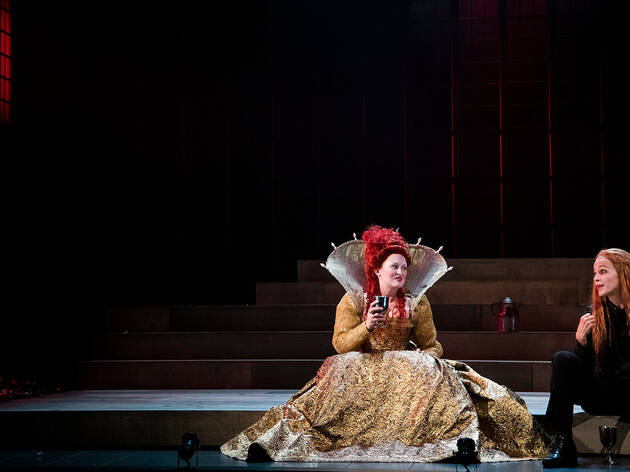 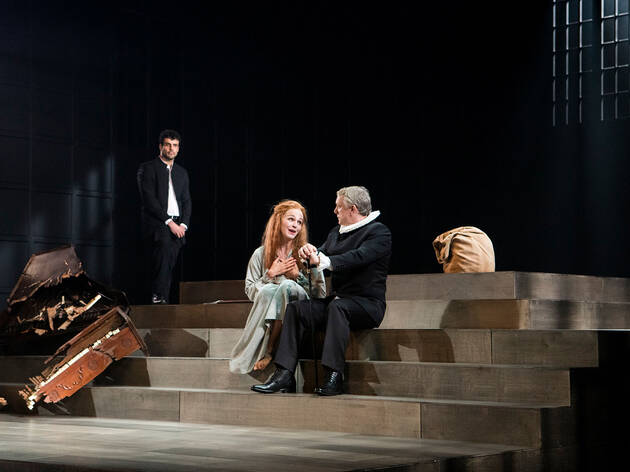 Much is made of theatre’s cathartic quality. It’s an art form beloved for its ability to give audiences safe passage as they experience and exorcise the knotty parts of the human condition by bearing witness to stories. But Sydney Theatre Company’s Mary Stuart, in a new adaptation by Kate Mulvany and directed by Lee Lewis, offers a different kind of catharsis: the act of reclaiming women’s stories with empathy, insight and, crucially, by allowing women of the past to finally have a voice.

Much like in STC’s 2018 production of Saint Joan, this is a play written by a man that has been terraformed into a play about women, by women. In both Shaw’s original work about Joan of Arc and Schiller’s 1800 play about Queens Mary and Elizabeth, much of the action was driven by the men around them – their jailers, operatives and informants – rather than giving voice and heft to the women at the centre.

In this new, freshly 21st century Mary Stuart, Kate Mulvany re-shapes the drama to give the women their own points of view. Mulvany writes with witty specificity and finely honed anger to tell the story of two queens imprisoned in very different ways. Mary Stuart’s confinement is of course literal: she has spent 19 years locked away by cousin Elizabeth under charges of treason. Elizabeth I, reigning queen of England, is a prisoner of circumstance: a self-titled Virgin Queen, hemmed in and reduced to sometimes ineffectual figurehead by her responsibilities and her court. Her crown is her only power, and she refuses to entertain any threat that she might lose it.

On a stately, grave set of raised platform and stone walls that are lifted from austere to transformative by the canny placement of high windows (designed by Elizabeth Gadsby and lit with a kind of yearning by Paul Jackson), we meet our queens.

First is Mary Stuart (Caroline Brazier), playfully engaging in some verbal sparring with jailer Paulet (Simon Burke) and his nephew Mortimer (Fayssal Bazzi). Even when they remove the last of her possessions and inform her that she is likely to be sentenced to death any day now, she remains resolved and sure. She wants an audience with Elizabeth; she is denied it. She holds her pet dog (played by Very Good Dogs Lady Darci and Tinkerbelle) and holds firm to herself. Brazier is excellent here: a steady flame.

In many ways, though, this is more Elizabeth’s play than Mary’s. We spend more time outside the dungeon, with Elizabeth and her court, than we do within it. Helen Thomson is Elizabeth and she’s astonishing here: clever and self-indulgent with a steel backbone. Thomson’s comic timing is near-legendary on Sydney stages by now, but what proves even more enjoyable is the way she twists from comedy to rage or tender sadness. It’s impossible to look away.

The crowning achievement of the new script lies in a scene where the queens meet and converse face-to-face. It’s either Elizabeth’s drunken dream or something more, but when it happens, it’s breathtaking, thanks to Thomson’s pitch-perfect tipsy performance and Brazier’s intimate ease with her one-time friend. Together, they are conspiratorial comrades, yet they are always sizing each other up: there are strong, sharp calculations behind each woman’s eyes. They are never not assessing each other. It’s a game, but it’s also a standoff.

Each women has defining moments when they are alone: Mary’s final confession, spoken without the presence of a priest, and Elizabeth’s bare, lonely signing of Mary’s death warrant, and these are beautiful scenes, sharp and full of empathy. But Mulvany’s script makes us hunger for the moments the women are together, and their one shared scene is both beacon and thesis statement: these women are splintered from each other by circumstance and hubris, but they are two sides of the same coin; this story reads now, properly, as tragedy.

There’s some excellent heavy lifting here by the largely-male ensemble of operatives, revolutionaries, and hapless secretaries. The brightest light is Peter Carroll as Elizabeth’s advisor Shewsbury, Rahel Romahn is a charmingly overwhelmed secretary, and in an unsung, essential way, Simon Burke brings real pathos to his role as Paulet, Mary’s jailer.

At two hours without interval, this play is a blockade against old ideas but it could stand to be trimmed a little; it takes us a long time to meet Elizabeth, and any attention given to anything but the Queens feels like a little loss. This play makes plenty of strong statements about the gendered approach to historical records, but it’s strongest when it doesn’t deliver those statements directly to the audience as verbal address – the real value is in watching it play out, rather than being told about it. It’s a shame too that the third and final female cast member – Darcey Wilson, as a young attendant – is not offered the opportunity to speak. Thankfully, though, she provides much of the final scene’s poignancy.

Still, as directed by Lee Lewis like a game of chess – strategic and oddly beautiful in its machinations – there’s a real sense of grace in this Mary Stuart.  The two hours fly by. This is a story of two women, proud to the point of ruin, told with dignity and care.