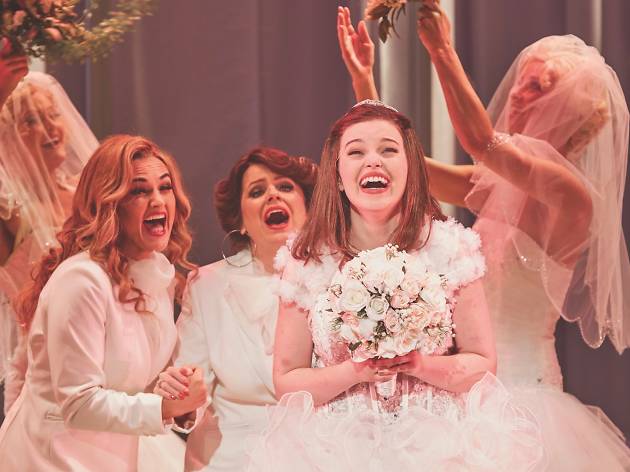 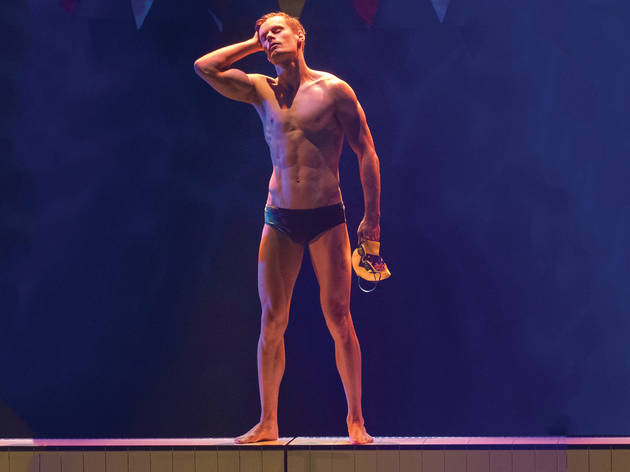 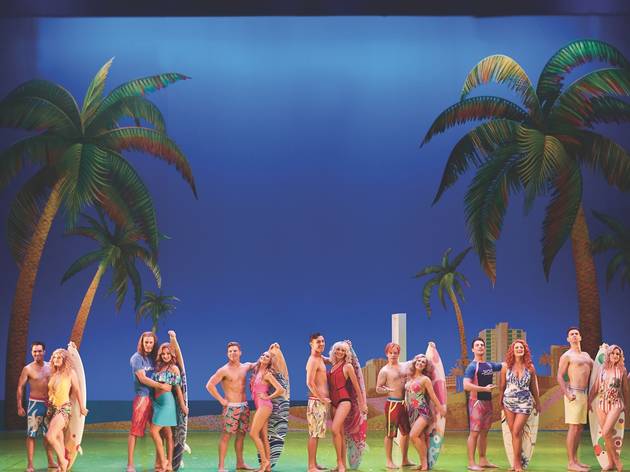 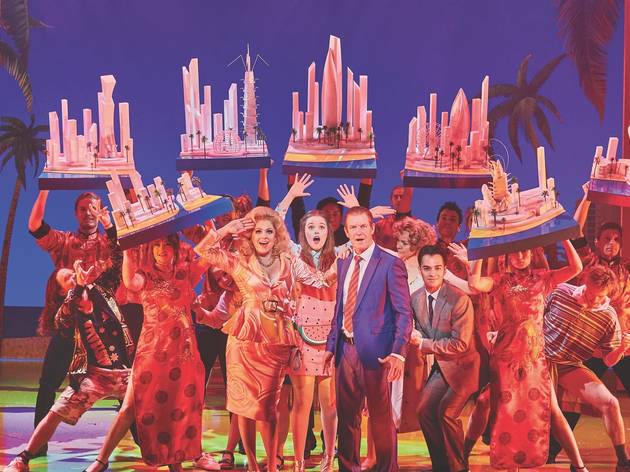 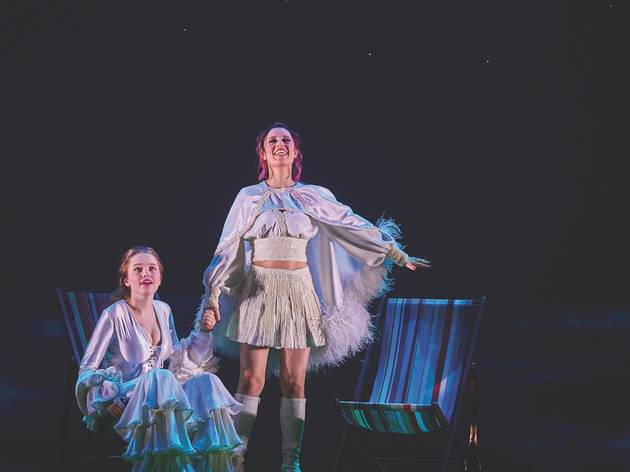 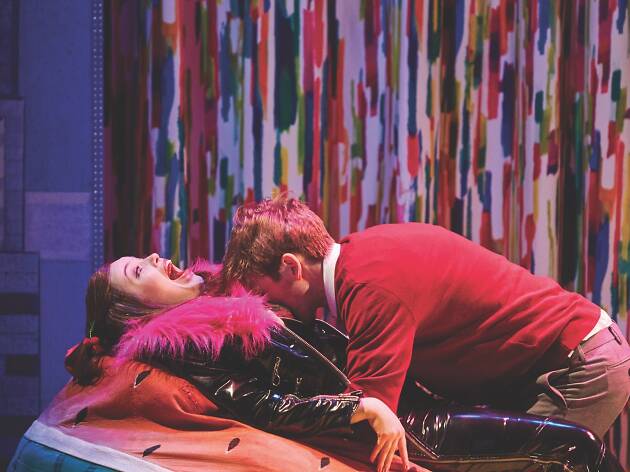 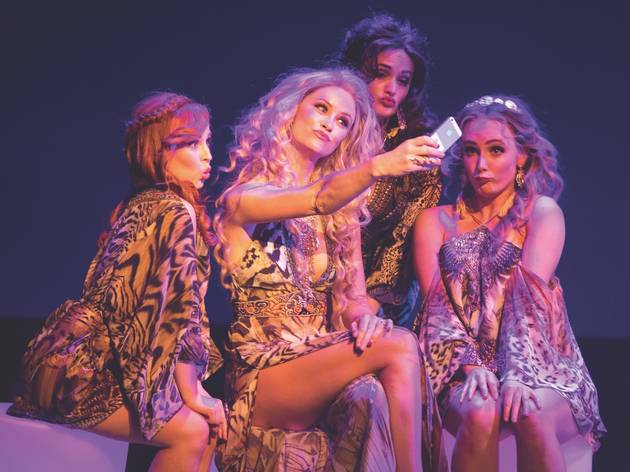 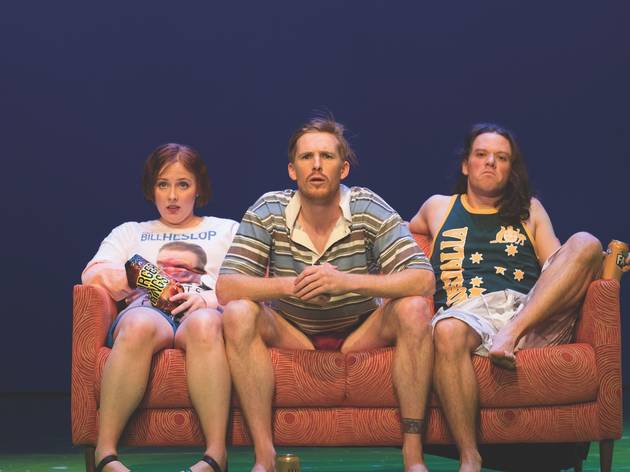 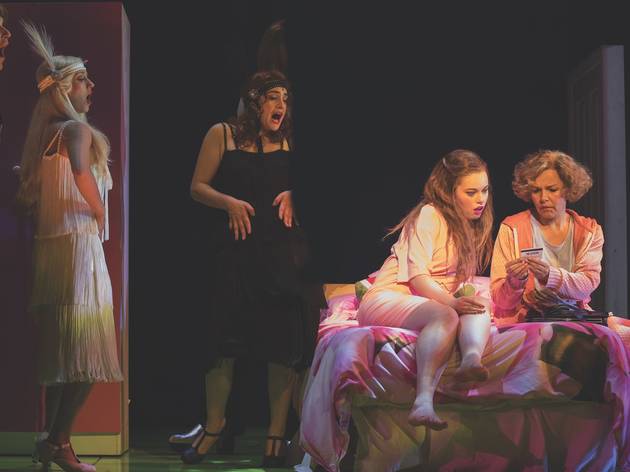 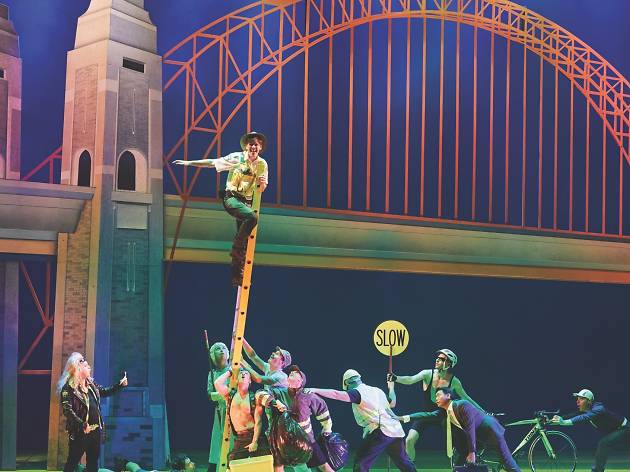 Sydney, Muriel has arrived. With an updated book by original screenwriter PJ Hogan and music by pop intelligentsia Kate Miller-Heidke and Keir Nuttall, Muriel’s Wedding the Musical will leave you smiling for days.

Directed by our finest big-picture showman Simon Phillips, this is the film-to-stage adaptation critics, audiences and creatives dream of: an updated and evolved version of the original story that stands proudly as its own creation.

Muriel (Maggie McKenna, in an astonishing debut) is the outcast in the fictional, Tweed Heads-inspired coastal town of Porpoise Spit. The locals worship beach bodies and traditional gender stereotypes (the women, the ensemble chirp, don’t have any pubic hair). Muriel, who still listens to ABBA in 2017, and isn’t stick-thin or blessed with social graces, is an outsider. She’s bullied by family and friends. She hates herself, and the reality of that loathing is never downplayed, her anguish sensitively explored in numbers ‘Lucky Last’ and ‘Why Can’t That Be Me?’

Her only allies are ABBA (Jaime Hadwen, Sheridan Harbridge, Mark Hill and Aaron Tsindos) – who appear in Muriel’s times of need as her friends, confidantes, and conscience. Their magical appearances satisfyingly solve the dilemma of adapting this film into a musical: how to marry its memorable use of ABBA songs with a brand-new and contemporary score?

Of course, Muriel isn’t the only person suffocating in Porpoise Spit. Her mother Betty (a heartbreaking Justine Clarke) is her husband’s preferred victim. This character is developed further on stage than in the movie as a moving counter to Muriel’s own journey. In the darker second act, Betty is granted a moment of grace and then a moment of tribute; you may well sob for 20 straight minutes.

Betty may not be able to leave Porpoise Spit and her other children but escape becomes possible for Muriel when she runs into old high school acquaintance Rhonda Epinstall (a standout Madeleine Jones in a more open-hearted, but no less unapologetic, take on the character than in the film).

When Rhonda sees Muriel as someone worthwhile, it’s like we’ve all been validated. The two women fall into a giddy, intimate friendship and it isn’t long before Muriel uses her father’s money to get herself to Sydney.

The Sydney in Muriel’s Wedding the Musical – complete with its own theme song – is a dream, all Harbour Bridge, Opera House and Instagram photo-ops. ‘Sydney,’ that triumphant arrival number, captures the Sydney of liberation, hedonism and possibility that only exists in the eyes of those who  have moved here from smaller, conservative towns. “When you get to Sydney,” the ensemble sings, “You finally get to be you.”

Muriel’s life truly begins in Sydney, and it begins with Rhonda. But there are complications: her father’s under investigation, her mother is suffering, she can’t stop feeling useless… and then something horrible happens to Muriel’s – and our – beloved Rhonda.

Muriel’s Wedding the Musical is a gorgeously-constructed, unashamedly Australian love letter to outsider women and the freedom they seek; to the women who are crushed by men and those who can stand alone without them; to women who are forced by their communities and the oppressive beauty industrial complex to diminish themselves and find power in rejecting that diminishment. The soul of the show lives in McKenna, Jones, and Clarke, each representing different aspects of the self: McKenna is our social craving and ambition; Jones, our rebellion, and Clarke our lingering sadness of dreams unfulfilled. Together they create something bigger than themselves.

Gabriela Tylesova’s sun-drenched set and cheerful costumes helps establish that the world of the musical is less dark and gritty than the film, but the musical is all the better for it. We've been let in on the characters’ secret lives via song, and empathy and warmth flows when music speaks – it does more than a close up ever could. The best musicals, even the ones that are driven by darker, more complex anxieties, are navigated by the heart, and this show has the biggest heart in the world.

It perhaps isn’t perfect (though is anything truly perfect?): Bill Heslop’s ‘Progress’, an ode to crass urban development, could make its point in less time (just as Gary Sweet’s Helsop himself cruelly snaps and snarls).

And while Muriel’s late-found clarity as the show marches towards its finale is clearly self-driven, a gentle dramaturgical massage could help further separate it from her new and bigger romantic life in this adaptation. It would help to preserve above all else the true love story of the show: that of Muriel and Rhonda.

Still, the musical is polished, well-balanced and clearly cared for by co-producers Global Creatures and Sydney Theatre Company. The book is strong, the score is irresistible, and the ensemble is packed with our greatest musical theatre performers – all superb singers and notable acting talents in a multitude of roles, creating a world that shimmers with life.

The Porpoise Spit mean girls (a dead-on caricature of the modern day girl squad, led by Christie Whelan Browne) bristle with energy and killer vocal arrangements; their song ‘Can’t Hang’ is one of a number of instant earworms.

Stephen Madsen brings surprising humour to the role of Alexander Shkuratov, a Russian swimmer who needs an Australian bride, and Ben Bennett continues his evolution into a well-rounded musical theatre star as Brice Nobes, a role that’s been deepened and extended from the film.

Miller-Heidke and Nuttall’s music is slyly referential but crucially timeless; while ‘Can’t Hang,’ ‘Life is a Competition’ and ‘Mr and Mrs Shkuratov’ lean heavily on comedy via pop, R&B and even Russian folk influences, the songs that hold the show’s heart in its hands, ‘Amazing,’ ‘My Mother’ and ‘A True Friend’, feel like essential, timeless additions to the Australian musical theatre canon.

Phillips and choreographer Andrew Hallsworth keep the show moving with lovingly brisk paces that stops entirely for its most emotional moments but make the near three hour running time fly by, and Hallsworth’s choreography is twinkle in the eye writ large, precise and merry. The end result is a musical full of verve, feeling, friendship, and sophisticated lyrics that will make you fall in love with Muriel – and musicals – all over again.

This is a review of the original Sydney season of Muriel's Wedding: The Musical. The show has a return season at the Sydney Lyric in 2019.