The outgoing artistic director on steering the First Nations company’s first ever show for children, a mesmerising hit with kids and their grown-ups alike

Generations of love have been poured into Waru – Journey of the small turtle. The first work specifically created for children to emerge, as if blinking from an egg onto a surf-tossed beach,  from the nation’s preeminent First Nations-led company, Bangarra Dance Theatre. This gentle show is inspired by the totemic systems of the Torres Strait, drawing deep on the Kalaw Kawaw Ya language spoken on the western islands of Mabuyag, Baddhu and Thursday Island. It’s a beautiful, immersive work aimed at kids aged 3-7. Elma Kris steps into the narrator role of Aka Malu (grandmother), with Aba Bero as green turtle hatchling Migi, who learns all about the lifecycle of her people and the land and sea they call home.

“There’s a little bit of give and take,” outgoing artistic director Stephen Page says of the participatory experience. Following a sold-out season at Bangarra’s Walsh Bay home in 2022, it will usher in a new era in Sydney’s arts scene, opening the Pavilion Performing Arts Centre  in  Sutherland  as part of the Sydney Festival program, before setting off on a regional tour in 2023 that includes Victoria, Queensland and the Northern Territory.

Penned by actor, dancer, writer, director and Play School presenter (and Stephen’s son) Hunter Page-Lochard, Waru expands on the ‘Turtle’ sequence of Bangarra’s glowing 2001 triptych Corroboree. That work was choreographed by his father, who also helms this new iteration. Page senior is loving leaning into being a grandfather and was overjoyed that his son’s eldest daughter Mila (now joined by baby sister Evara) was one of the first people to watch the show in its earliest run-through. This was just before lockdowns postponed its debut at Bangarra’s new digs at Wharf 4/5 in the historic Walsh Bay Arts Precinct.

“It was really beautiful,” Page says of this intergenerational love-in. “Young children now are really aware of cultural significance. Of respect for the land and the Welcome to Country. They’re switched on, and they can come home from a show like Waru and say the name of the language of that place.”

The story follows the adventures of Migi. “We touch on the extraordinary life cycle of a mother turtle, hatching her eggs in her nests and then two full moons passing before the hatchlings hatch,” Page says of the environmentally-conscious work and its matriarchal focus. “This young, small turtle goes out into the wide world that is the ocean, where they will be challenged by everything and anything, and then comes back to her mother.” 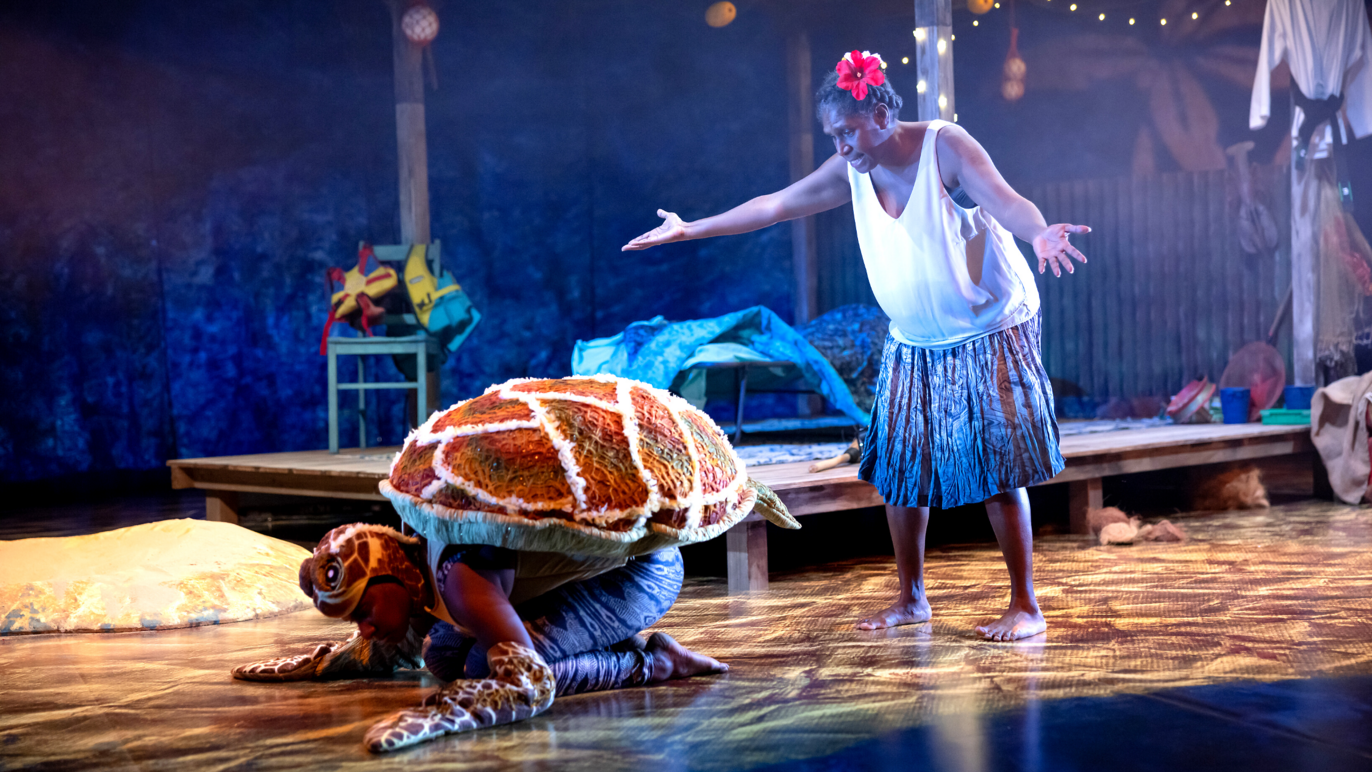 Sharing the wealth of thousands of years of First People’s knowledge is at the heart of what Bangarra does. Page is proud that he and his son worked hand-in-hand on Waru alongside an incredible artistic team that includes Bangarra alumni Sani Townson and Elma Kris, the latter narrating alongside Aba Bero performing as Migi. Jacob Nash has created a beautiful beach set and turtle costume, with Matt Cox conjuring life-giving sun and a swarm of green turtles with his lighting design. Leonora Adidi, Helen Anu [sister of Christine] and Peggy Misi provide lilting lullabies, with the score by Page’s late brother David and resident composer Steve Francis.

“Leonora and Helen were so excited about getting their language out there,” Page says. “They were all connected into that conductor spirit shaping the story. It’s a beautiful, guided, raw and honest process.”

The musical result is mesmerising. “There’s just something about that Polynesian, South Pacific sound,” Page says. “That melodic choral sound that’s completely different to Aboriginal mainland song or language, with the breath of salt in it. You can hear the water and the wind, and the connection to constellations that helped shape this story.”

Kids are welcomed into each performance space with hands-on activities designed by the Australian Maritime Museum, including making ghost net turtles from reclaimed ocean plastic. There’s even some easter eggs for grown up audience members scattered throughout the show – nods to Aka Malu’s fervent fandom for martial arts star Bruce Lee evokes some knowing chuckles. At Walsh Bay, parents were just as enamoured with the experience as their kids, Page reveals. “We had Bangarra fans come up to Hunter and I who were saying, ‘I’m not sure who’s gonna like this more, me or my four-year-old’. They were so happy they could have this Bangarra dance experience through the lens of a child.” 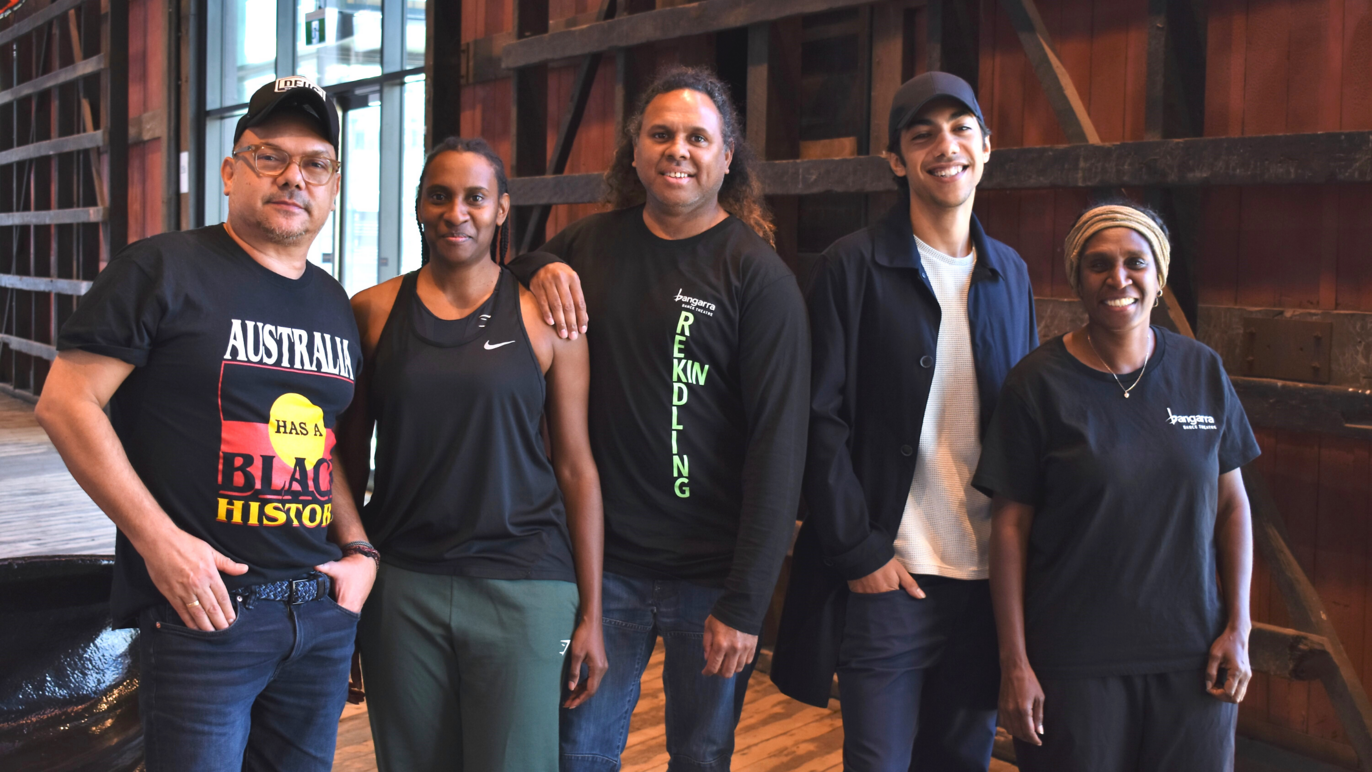 He's sure the work will eventually swim its way home to Thursday Island. “We always take a work back on Country, like we just took SandSong back to the Kimberleys. And the interesting thing is that when Waru makes it up there, Elma probably doesn’t have to speak any lines in English for the Torres Strait students. So it will go through a different type of cultural funnel."

Family is central to Bangarra, both blood and extended. Page-Lochard made his debut as a babe in arms in a fleeting cameo in his father’s first full-length work for the company, 1992’s Praying Mantis Dreaming. “We’ve been working together for so long, you know,” Page says. “He’s been around this rehearsal room and the aesthetic of dance and languages since he was a kid.”

Most recently appearing with them on-stage in 2013’s Blak, page-Lochard also worked with his dad on the luminous, dance-driven movie Spear two years later. Now that Page has handed over the caretaking keys to Bangarra to long-term collaborator, dancer and gifted choreographer Frances Rings, he’s looking forward to spending more time with his granddaughters and exploring new projects with his son. Page-Lochard has a slightly different way of working, though. “We were in a Zoom writing room together recently and I was being a bit silly, and he was like, ‘Dad, can we just be serious?’” Page chuckles mischievously. “I was just so proud of him, hanging on to every word.”

Waru – Journey of the small turtle plays at Pavilion Performing Arts, Sutherland, from January 28-29, 11am and 1.30pm. Tickets are $35+bf or $120+bf for a family of four. Find out more and buy your tickets here.