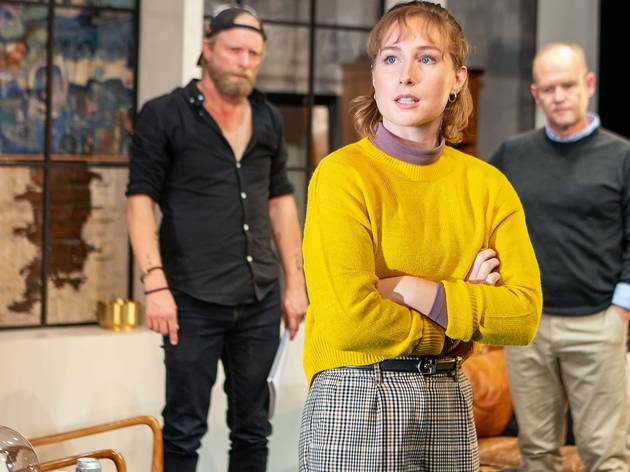 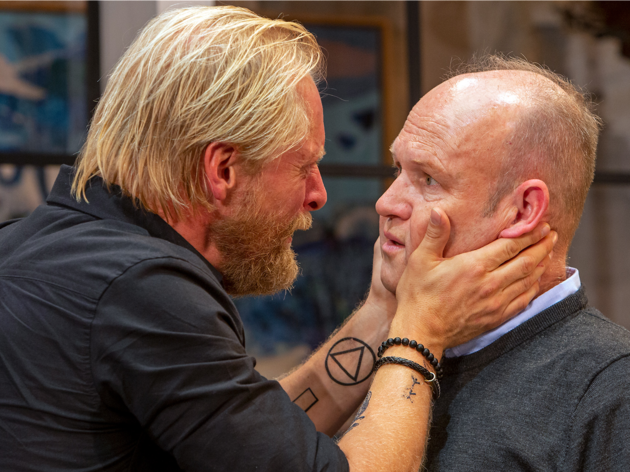 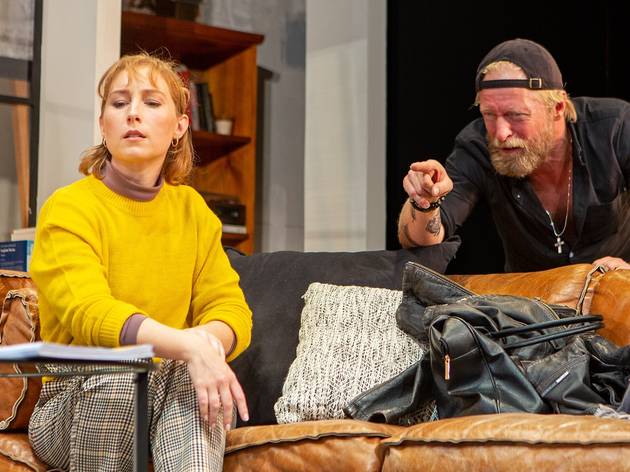 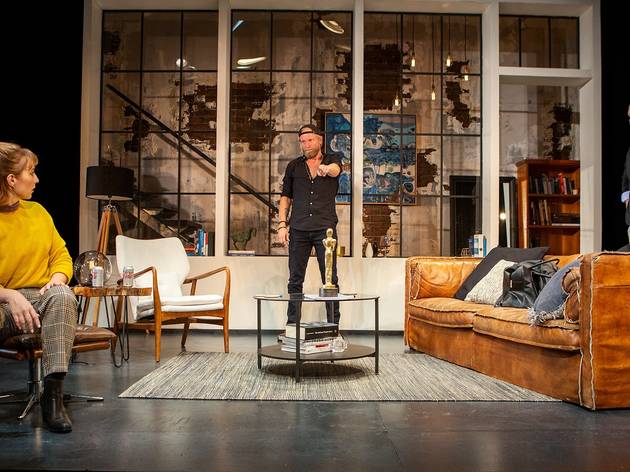 A play about putting on a play, it burns the so-called allies who can't listen and learn from women

Northern Irish playwright David Ireland clearly takes a dim view of performative wokeness and lip service identity politics, if Ulster American is anything to go by. With one act, one location and three characters, Ireland cuts through layers of feigned concern and false empathy to reveal the grasping, narcissistic, human heart in all its grim glory. It’s a comedy at its core, but a very black one. You’ll know within three minutes if this one is going to work for you.

The location is the London apartment of theatre director Leigh Carver (Brian Meegan, The Norman Conquests), who is taking a meeting with Oscar-winning American actor Jay Conway (Jeremy Waters, The Flick). Conway is starring in Carver’s latest work, a play about the Troubles in Northern Ireland. His fame has ensured the season is already sold out, even though rehearsals haven’t begun yet. Conway, on the wagon, sips Diet Coke and waxes philosophical about the difficulties of being a male feminist. Carver smiles into his wine and tries to guide the conversation back to the play at hand. Both their hypocrisies become all too apparent when the play’s writer, Ruth Davenport (Harriet Gordon-Anderson, Bell Shakespeare’s Hamlet), arrives.

Conway, who has Irish Catholic roots, was under the impression he was starring in a play about a bold Irish rebel struggling under the heel of the British. But Davenport, a staunch Unionist who considers herself British rather than Irish, has written a pro-UK parable. Conway demands changes to the script. Carver, desperate to placate his cash cow leading man, begins to increase the pressure. For her part, Davenport refuses to be told who she is and what her work should be about by two men, no matter how spotless their woke bona fides may be.

Dark, deft, and savage, Ulster American has little sympathy for any of its characters (well, maybe just a smidge for Ruth) but brings plenty of insight. There’s an old saying that civilisation is only ever three missed meals away from collapse, but here it only takes a few glasses of red and some sharp words before everyone is reduced to their basest level. Movie star Conway is revealed as an egotistical boor, absolutely convinced of his own brilliance as he recites right-on platitudes one minute while musing on whether he would assault Princess Diana the next (at gunpoint, you understand – if he really had to). Cultured intellectual Carver slips easily from voice of reason to patronising agent of the patriarchy, cruelly telling Davenport that “real” British people will always view her as Irish no matter how she, herself, identifies. Ruth is just about our protagonist by sheer dint of not being as awful as her two sparring partners. But she demonstrates a cold ambition that sees her put her career advancement ahead of the life of her own mother.

They’re all awful people, so it’s a good thing they’re very, very funny, with each cast member embracing their character’s braggadocio and intellectual vanity. Awful people can be awfully entertaining, and under Shane Anthony’s crisp direction Ulster American ticks along as briskly as a Noel Coward piece. For all that it sets out to shock and provoke, it’s the little details that really sing, from Conway’s New Age tattoos to Carver’s droll reactions to his American guest’s pretentions. Imagine Oscar Wilde by way of Oliver Stone and you’re on the right track. Ulster American has been described as a post-#MeToo work, but its ambitions are grander than that, using shock comedy to offer a brutal indictment of the lies we tell ourselves and each other.