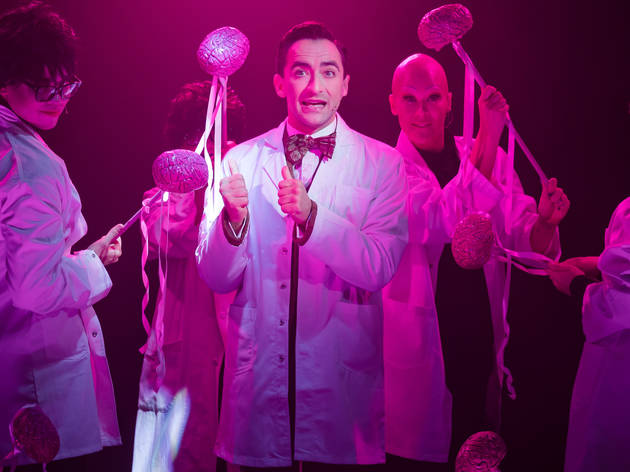 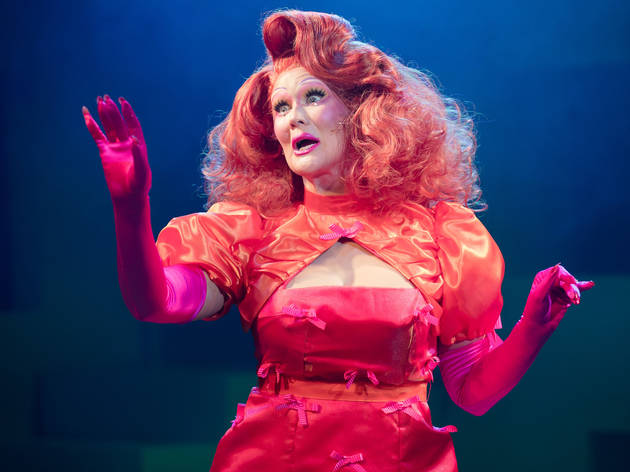 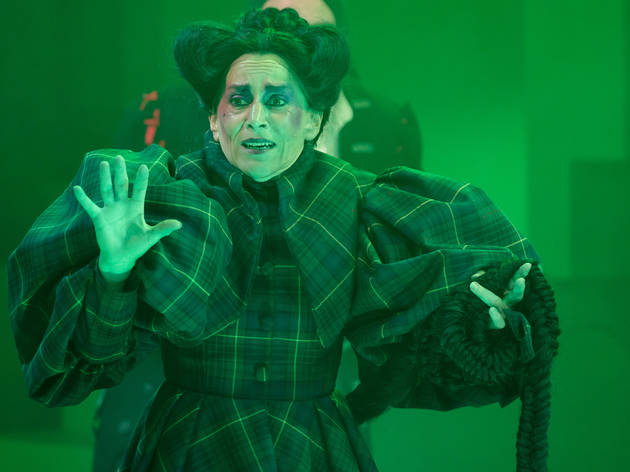 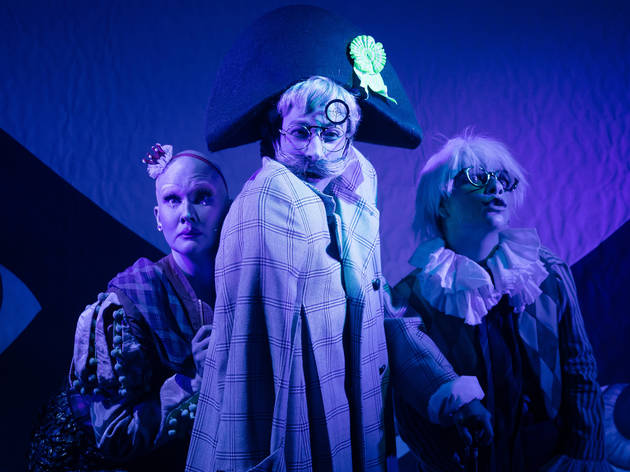 It’s alive! After 11 long months of deathly silence, the stage of the Hayes Theatre once again has a pulse. Sydney’s home of grass-roots musical theatre is blowing off the cobwebs with an electrifying adrenaline rush of a show, reimagining Mel Brooks and Thomas Mehan’s zom-com B-movie spoof as a surrealist, technicoloured, genderqueer joyride.

Adapted by Mel Brooks from his cult 1974-made horror-farce mash-up, the show follows the misadventures of a brilliant young anatomist, Frederick Frankenstein (Matthew Backer). After receiving word that his grandfather has died, Frederick is lured back to his family’s ancestral gothic pile in Transylvania to settle the estate. He bids a reluctant farewell to his prestigious professorship and bombshell fiance, Elizabeth (Shannon Dooley), in New York, but once he arrives in this strange new land, he’s oddly charmed by the bizarre characters he encounters, most notably the yodelling lab assistant Ingar (Ben Gerrard). Despite his determination to step out from his infamous forbear’s shadow, Frederick ends up treading the same dreadful path, complete with pilfered grey matter, reanimated cadavers, hunchbacked servants and furious villagers.

In its original movie incarnation, shot entirely in black and white, Brooks’ reverence for the seminal 1931 movie, featuring Boris Karloff’s immortal portrayal of the monster, is writ large. No such homage to its source material exists in director Alexander Berlage’s production, however. In fact, at almost every turn, this dynamic, freewheeling show does the exact opposite of its cinematic counterpart. Far from being black and white, the MC Escher-esque stage and neon-hued lighting, by the ever ingenious Isabel Hudson and Trent Suideest, is bursting with colour. Instead of wink-wink-nudge-nudge innuendo, this production wears its sex-positive heart on its latex-covered sleeve, most notably in the Leigh Bowery-inspired gimp-costumed monster. Into a narrative that once leaned heavily into a problematically reductive and sexist view of womanhood, Berlage has channeled drag aesthetics and gender-swapped roles to subvert these outdated tropes. Kitsch is swapped for camp, kinks are added to the creeps, and comedy powered by pithy one-line zingers is amplified by a cartoonish kaleidoscope of physical goofery and absurdist schtick.

Thrilling as this is, adding so many bold flourishes to a work by two such meticulous wordsmiths is still a risky gambit. Stitching on a prop gag here, a moment of slapstick there to Brooks and Hennmen’s brilliant dialogue could produce a monstrous result. But Berlage has carefully judged just how much license he can take with this show without betraying its essence – which turns out, is a lot, although there are a few moments (one involving a truly inexplicable hermit crab costume) that get perilously close to not just bending the material but breaking it.

However, where it counts, Brooks’ spirit remains intact. Much like Brooks, who trusted the comic genius of Gene Wilder to breathe life into his Frederick Frankenstein, Berlage has given his cast enormous freedoms to draw on all their comic gifts. Dooley’s Marilyn-meets-Anna-Nicole-Smith portrayal of Elizabeth can split a side with the mere bat of a fake eyelash, while Lucia Mastrantone infuses her portrayal of the decrepit Frau Blücher with hilarious “I’m not a regular housekeeper, I’m a cool housekeeper” vibes. Nick Eynaud’s brief but unforgettable turn as the intelligence-imbued monster does indeed take its cues, as per the script, from Noel Coward – if the esteemed playwright happened to be in the middle of an absinthe bender, and Amy Hack's Inspector Kemp unleashes a pan-European accent so perfectly hammy, every syllable is a punchline.

To anchor all this anarchy, Matthew Backer is the still point of this cartwheeling world. A figure of near-naturalism to counterpoint the madness, his pristine vocals – put to particularly jaw-dropping use in the white-knuckle patter song ‘The Brain’ – and grounded, geekish charm ensure one foot of this production is firmly planted in Brooks’ intentions, while the other is free to stomp a path all of its own.

Get under the skin of this show by reading our interview with stars Matthew Backer and Shannon Dooley.