The best places to see the Northern Lights

Spy shimmering colours from Canada to Sweden at the best places to see the Northern Lights around the world.

The Northern Lights, also known as the aurora borealis, should be on every traveller's celestial bucket list. In fact, the Internet is full of aurora-chasers who spent considerable amounts of time tracking geomagnetic storms in order to see swirling streaks of pink, green, yellow and blue light up the sky. Typically, the Northern Lights are visible in places like Iceland, Norway and Canada, but every now and again, the northern reaches of the USA and UK get a display too.

Ready to see something pretty spectacular? Here’s what you need to know about the phenomenon, and the best places on earth to go aurora-spotting.

What actually are the Northern Lights?

Appearing as a glow at the horizon, an arc that curves across the sky, or rays, ribbons or bands of colour that move in the darkness (most commonly in shades of pink, yellow and green), the Northern Lights are, rather unromantically, the result of collisions between gaseous particles in the Earth's atmosphere and charged particles that are released from the sun’s atmosphere and blown towards earth by a solar wind. The colour depends on the type of particles that are colliding.

Where can you see the Northern Lights?

Those charged particles from the sun are usually deflected by the earth’s magnetic field, but, as the magnetic field is weaker at either pole, some of them sneak through here, enter the earth’s atmosphere and create visual magic in the sky.

For your best chance of spotting the Northern Lights, you’ll want to head towards the Arctic Circle. The so-called Aurora Zone consists of altitudes between 66 and 69 degrees north, where conditions are ideal.

There are auroras around the South Pole too – known as the Southern Lights, or aurora australis – but they’re less visible from land and therefore much harder to spot.

When can you see the Northern Lights?

The Northern Lights can be spotted all year round, but are most commonly seen between November and March thanks to the longer, darker nights in the Northern Hemisphere at this time of year. For the best chance, you need to head to a place without light pollution; time your aurora hunting with a new moon, for extra darkness; and, ideally, head out on a clear, cloud-free night. Then just keep your eyes peeled! 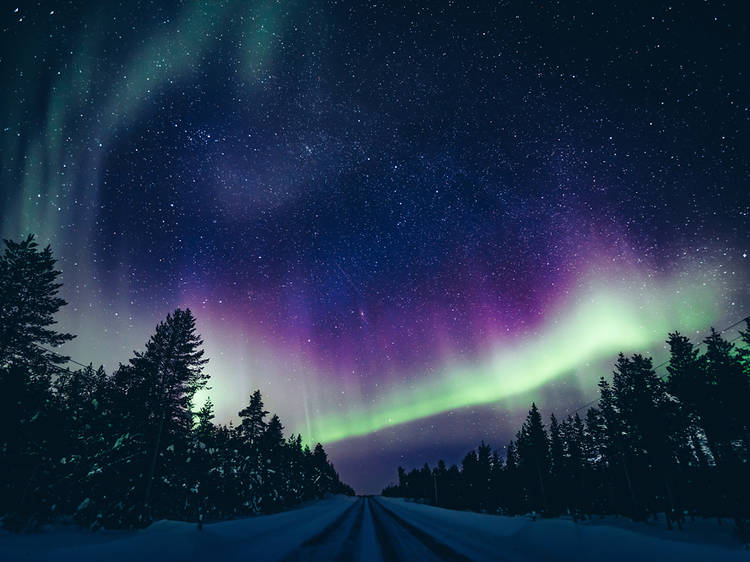 Finnish Lapland plays host to the Northern Lights an impressive 200 nights a year. You’ll want to visit this northern region in winter, when 24-hour summer daylight is replaced with almost constant night. Popular bases for aurora-spotting holidays include remote Utsjoki in the far north, Kilpisjärvi in the west and the skiing town of Levi. In the central Lapland resort of Luosto, bells are rung when the aurora makes an appearance. Handy!

Stay here If just the thought of spending all night outside in the hope that you’ll catch a glimpse of the aurora makes your toes feel chilly, give this a go instead. The Arctic Treehouse Hotel has suites with floor-to-ceiling windows at the end of the bed, for admiring the view and watching for the Northern Lights from beneath a duvet. 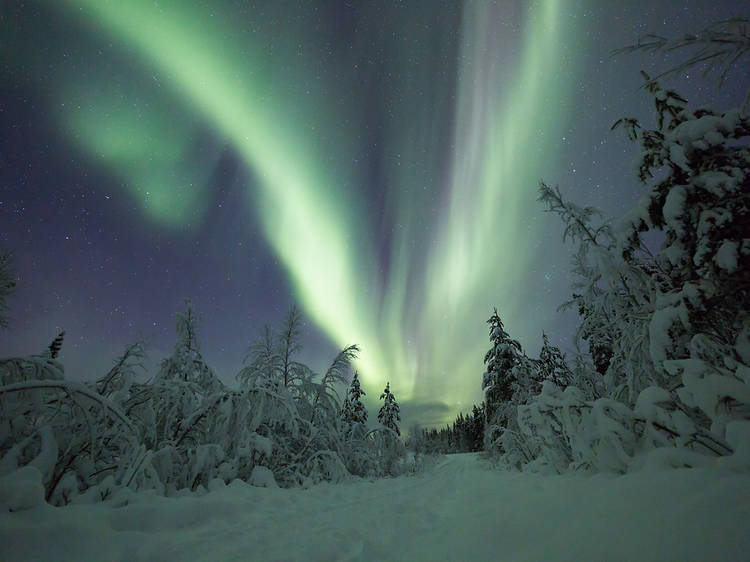 Swedish Lapland is an ideal aurora-hunting playground, with plenty of wholesome outdoorsy activities to keep you occupied while you’re waiting. For the very best chance of seeing the Northern Lights, head to the Aurora Sky Station in Abisko National Park. Kiruna, the country’s northernmost city is also an ideal base, as is the nearby village of Jukkasjärvi (home to the Ice Hotel). For a side of stunning scenery and isolation, visit the tiny village of Porjus.

Stay here There are countless cool places to kip while you hunt the Northern Lights in Sweden, but The Ice Hotel is one of the most iconic. The famous hotel, freshly constructed and sculpted out of snow and ice each winter, is not only a unique place to spend the night but in a stellar location for seeing the aurora. 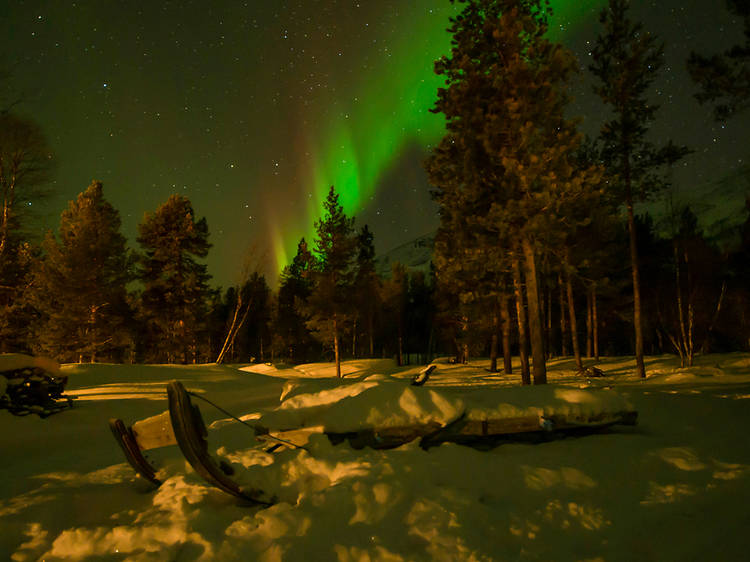 The northern reaches of Norway are nicely nestled within the Arctic circle, and the mega-long nights in winter make perfect aurora viewing conditions. The town of Tromsø is a popular place for Northern Light-hunters to base themselves. You can sometimes even spot the lights from the town itself.

If you’re taking your quest very seriously, there are few places better than Svalbard for spotting the lights. The world’s northernmost year-round settlement, Svalbard is in darkness pretty much constantly between November and February, providing optimum opportunties. Just make sure you take an official tour rather than heading out into the wilderness on your own. This is polar bear territory.

Stay here It’s not opening until 2022, but Svart, the world’s first energy-positive hotel, would make a dreamy base. The circular hotel which stands in the shallows of a fjord, will be off grid and zero waste – and its Arctic Circle location makes it a good bet for seeing the Northern Lights during your stay too. 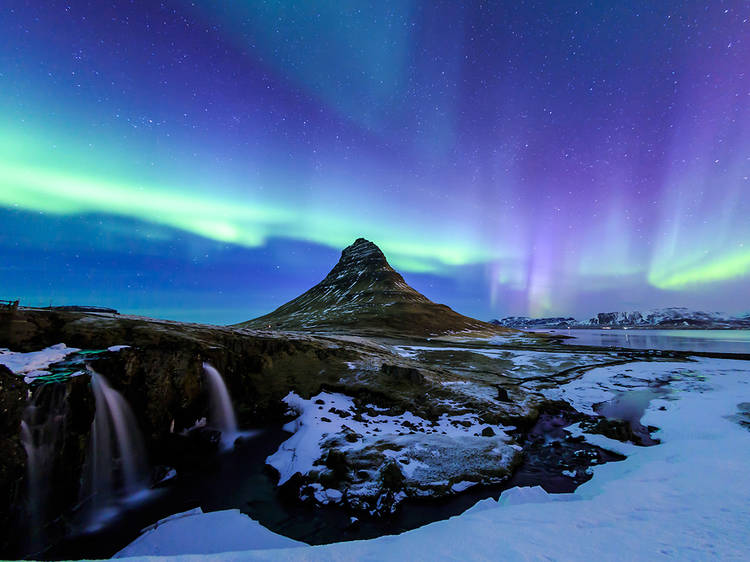 Reykjavik is popular with aurora-spotters, who base themselves in the city and head out into the darkness at night on organised tours or in rented cars. You can even see the lights in town sometimes, especially in Oskjuhlid forest. But heading away from the bright lights will aid your chances. The Westfjords and North Iceland have longer hours of darkness and statistically less frequent cloud cover. 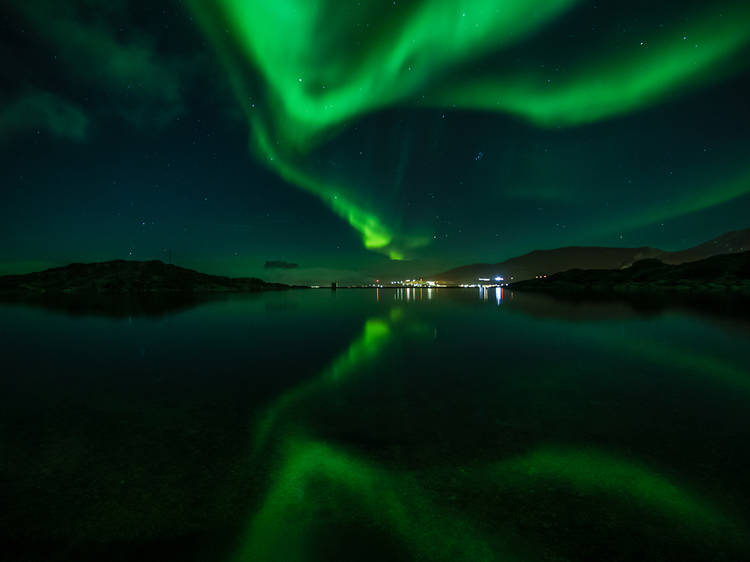 Light pollution is minimal in wild, rural Greenland. If you visit during the winter months, your chance of spotting the Nothern Lights is pretty good wherever you’re based. The lights can be seen from Greenland’s capital Nuuk, while Kangerlussuaq and Sisimiut are also good places to base yourself. Southern Greenland might be better if you don’t love the biting cold, but if you’re feeling brave, you should book a trip to beautiful Ilulissat in northern Greenland.

Stay here Got your thermals on? You can sleep overnight inside an actual igloo while hunting for the Northern Lights in Greenland. Iglo Lodge, on the shores of frozen Lake Nalluarsup, is a collection of traditional hand-built igloos, filled with candles and really, really good sleeping bags. 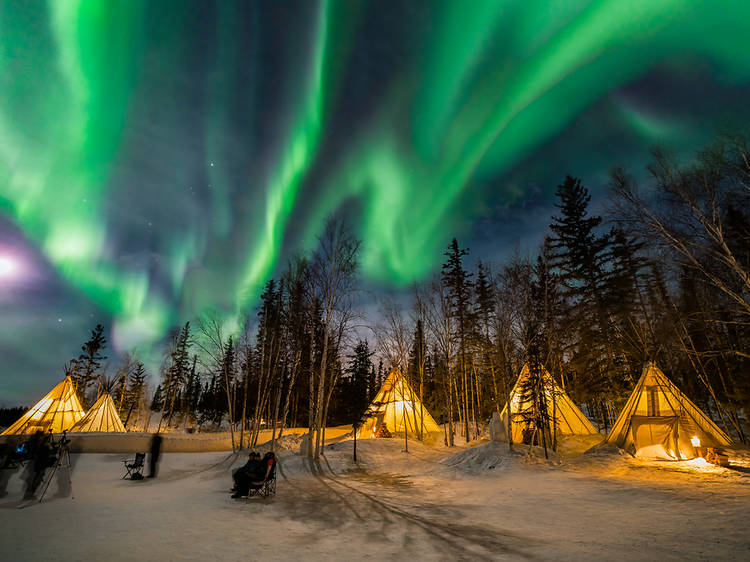 Though you might spot them anywhere in Canada, much of Northern Canada falls into the Aurora Zone, so is a brilliant place to try your luck. The Northwest Territories are your best bet. Churchill in northern Manitoba is another spot that’s popular with aurora-hunters for a reason, as are Yukon, Nunavut, Newfoundland and Labrador. You might even get lucky in Alberta during autumn – the lights have been known to make an appearance in Banff National Park.

Stay here Aurora Village is found near Yellowknife, in Canada’s Northwest Territories, and you can probably guess from its name that it’s a great place to see the Northern Lights. Spend the night watching the skies besides the fire in a teepee before being transferred to a hotel in Yellowknife for a well-deserved nap/scroll through your aurora snaps. 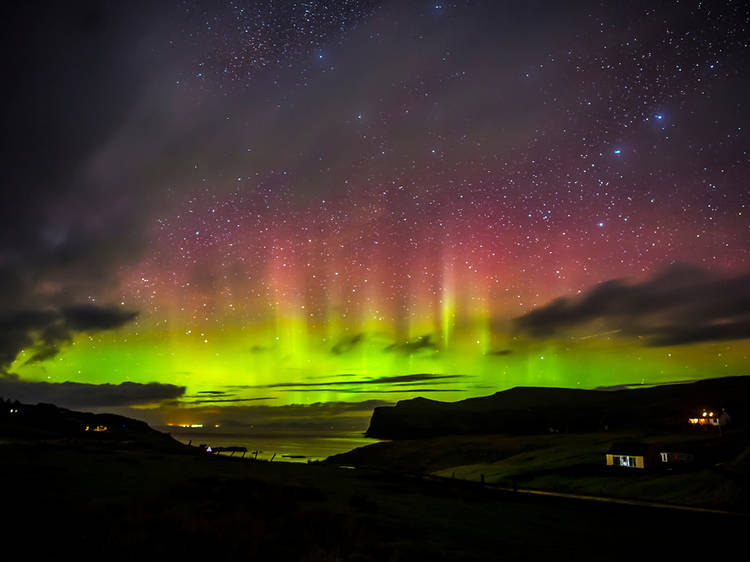 When the conditions are right, the Northern Lights can be spotted anwhere in Scotland – they have been sighted as far south as Edinburgh – but northern Scotland, which sits at a similar latitude to parts of Norway, is where you’re most likely to get an eyefull of the dancing colours. The islands of Shetland, Orkney, Harris, Lewis and the most northerly top of Skye all get regular visits from the lights. Other good places to try your luck are Caithness, the northernmost edge of the Scottish mainland, and the Cairngorms National Park.

Stay here The Highland Haven is a neat, scandi inspired cabin just off the scenic North Coast 500 road at the far north of the Scottish mainland, near Dunnet Head, the most northerly point. 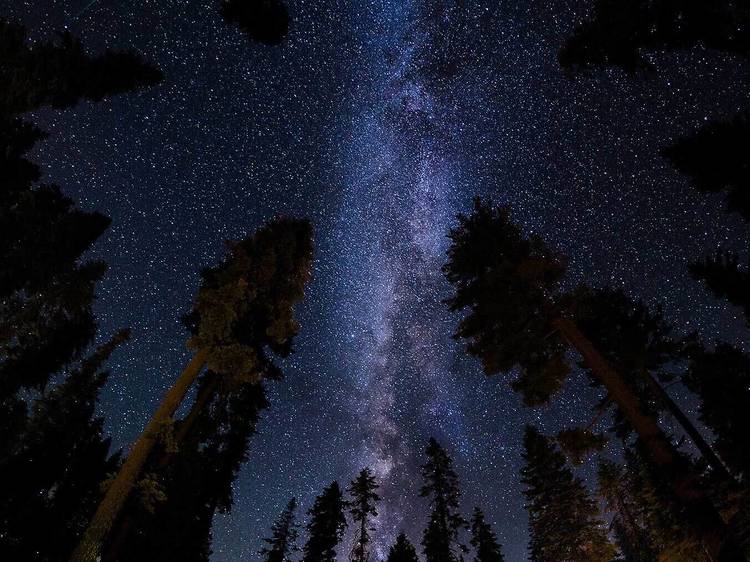 The darkest, clearest places to stargaze in the U.S.

It's time to see some stars 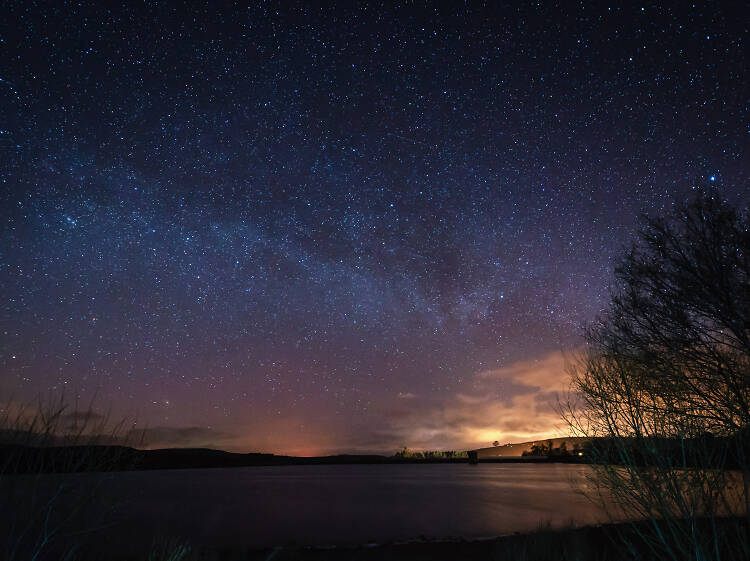 The best places to go stargazing in the UK