Your guide to the best shops, restaurants, clubs, live music, art and culture and bars in the most rapidly developing part of Ghana's capital city

Airport is not only the first place you'll see in Accra, it is, as you'll notice, where most of the development is happening. New malls, hotels (we hear reports of new openings by Radisson Blu, Hyatt, Marriott, Hilton and Hotel Sun by the Villagio group), bars and restaurants - including the unmissable Santoku - are all in what's loosely defined as 'Airport' or 'Airport Residential'.

In this site we have split up 'Airport' into 'Airport East' that covers Accra Mall and the Spintex road north of the Airport. In Accra Mall, you'll find plenty of high-end shops such as La Maison and Kiki Clothing, as well as supermarkets, pharmacies and bars, including Rhapsody's.

Airport Residential is largely around the southern end of the airport and includes three of Accra's best restaurants: Il Cavaliere Pazzo, La Chaumiere and Santoku, as well as one of the city's most active cultural venues - the Alliance Francaise d'Accra. Also being home to many of the city's offices you'll find other upmarket restaurants such as Nicolino's, Osteria Michelangelo and Branche in the Golden Tulip hotel.

Finally Airport City is loosely defined along the Liberation Road and includes places such as the new Marina Mall and Holiday Inn. But best not to get too hung up on the nomenclature - just head to Airport for Accra's most upmarket vibes. Dare we say it? It's overtaking Osu as Accra's hottest neighbourhood.

Restaurants and bars in Airport 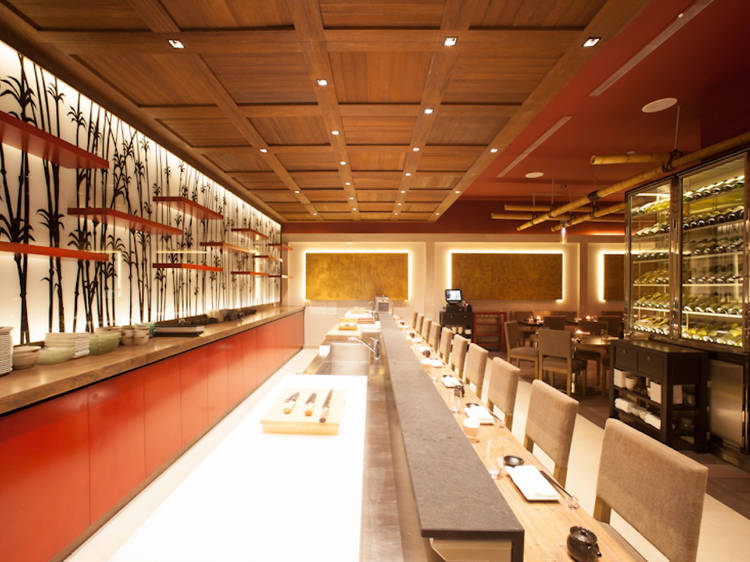 Santoku is the best restaurant in Ghana right now. There are other pretenders to the throne opening up soon, but the blend of incredible food, effortless service, and truly well-designed surroundings make this a cut above the rest. Firstly, the food. Think Nobu, and you’re just about there. In fact the team from Nobu London helped head chef Mohammed Ayres with the menu, and the results are excellent. Japanese chef Daisuke Yoshizaki creates beautiful looking plates of food, that deliver on the taste front too. Santoku’s signature dish is pan fried scallops with foie gras and orange tobiko – a stunning plate filled with the decadent flavour of the ingredients, yet fresh and light. The prawn tempura was light, allowing the prawn flavours to come through and the tuna and salmon sashimi with ginger, garlic and hot olive oil that just lightly cooked parts of the sashimi deepened the depth of flavour. Add in expertly mixed cocktails, design by Hubert de Givenchy (it’s all about the details), a seductive terrace and a bar that mixes some of the best cocktails in Accra (including the only place you can get sake), and it’s a heady and hedonistic combination. There’s also a private dining room that seats 18. ‘Santoku’ means innovation, and for Ghana, this restaurant really is. 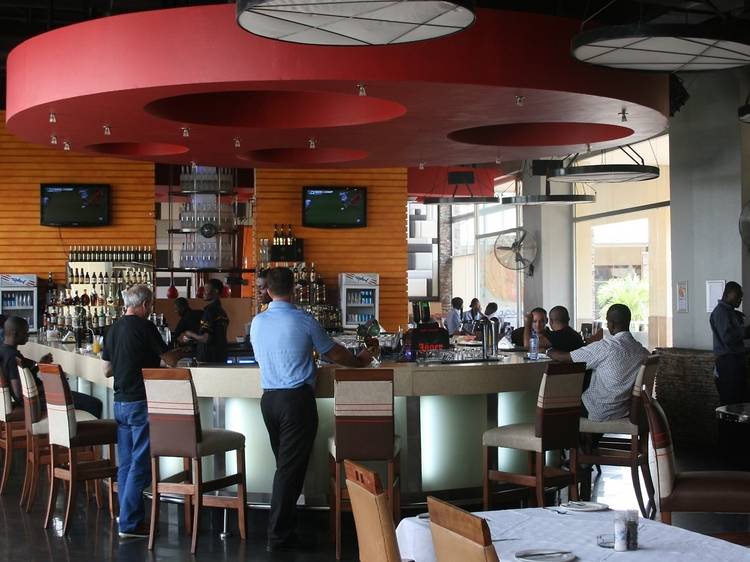 Rhapsody’s close to both the airport and surrounding hotels, ensuring the South African chain gets a steady supply of expats and moneyed locals to sample its extensive drink and cigar selection. There are two halves to the interior – an informal lounge, complete with panel-lit horseshoe bar and football on widescreen TVs, and a white- tableclothed restaurant with padded wall fabrics. Things crank up a notch on Fridays and Saturdays when DJs spin tunes: expect sizeable crowds, and be aware that you’ll have to pay if you arrive post-11pm. This is a very popular place for business meetings. It’s part of an established South African/Lebanese chain, so has the stylised decor and contemporary trimmings that would suggest, from flat screen sport to design-led bar stools. The menu offers an array of salads, burgers, steaks, snack platters and the like. There is a separate dining area. One great option is Rhapsody’s Chicken Espetada which is deboned chicken thighs skewered with spicy jalapenos and a sweet-chilli sauce. 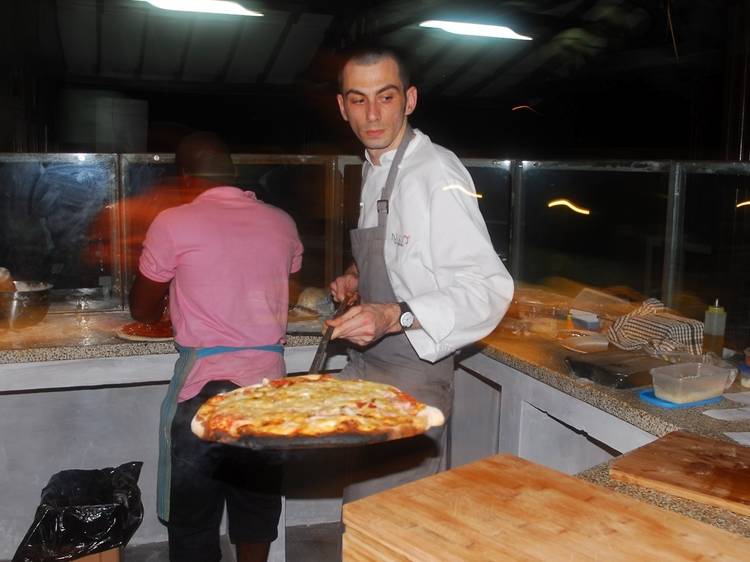 The best pizza in town? Despite stiff competition from Bella Roma and Mamma Mia, the wood burning pizza oven at Nicolino and a super tasty crust pip the other two. The set up is professional too, the staff are efficient and courteous, but it’s the head chef Humberto Dettori that has come to Ghana with real provenance – his previous posting was under two Michelin-starred chef Douglas Santi in Rome. Nicolino couldn’t have a better location – it’s in the pleasant grounds of the Alliance Francaise, in a breezy, open-sided area. Pizzas such as a Libanese with halloumi and zaatar, or Toscana with spicy sausage arrive on an artfully rustic piece of wood, but if you’re really hungry, try the Nicolino burger – a beef patty enveloped in pizza crust. Soon opening, is a small terrace bar with a barbecue. It’s also open for breakfast, which is Lebanese style. 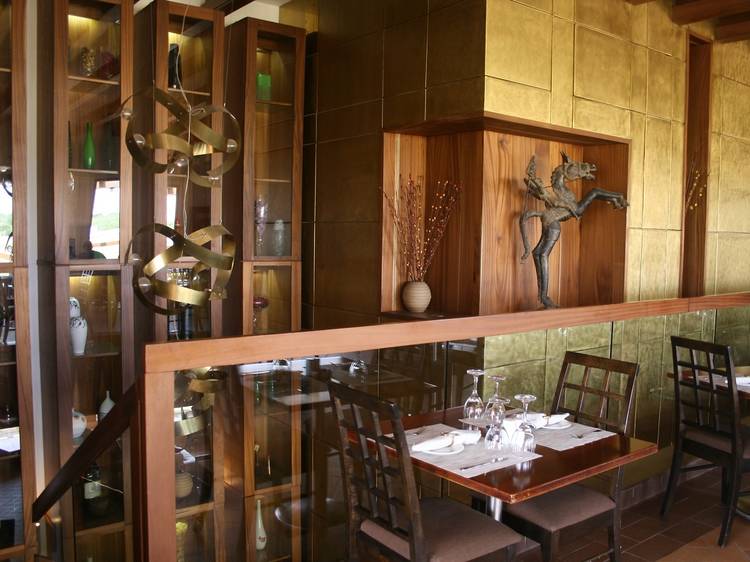 In one of the most prestigious spots in the city, overlooking the Polo Club’s field, Il Cavaliere Pazzo rises to the occasion. It’s also one of the most impressive buildings in Accra, making effective use of wood, both on the interior and exterior. It’s refreshingly understated – the polo field is the focal point. Up the elegant wooden staircase is the principal dining area, with windows overlooking the field, but to get closer to the action there’s a balcony. The menu is unswervingly Italian, with genuine risottos, gnocchi and ravioli with spinach and ricotta. 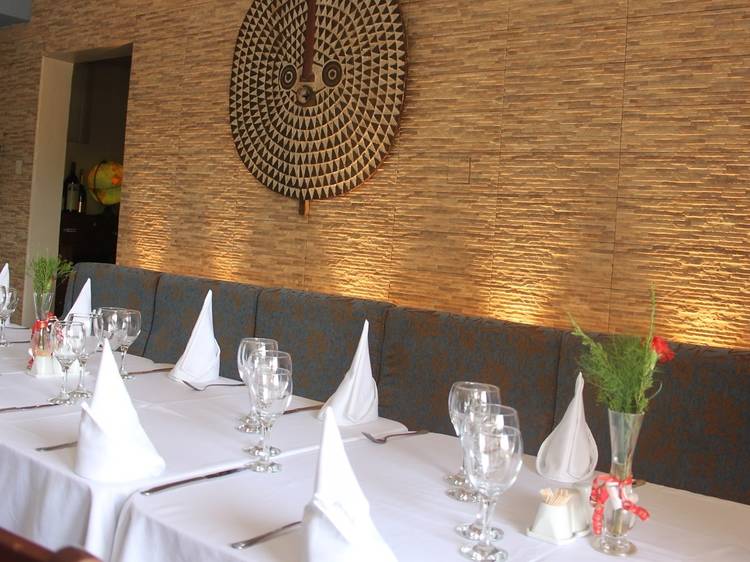 La Chaumiere’s sophisticated French dishes have been delighting Accra’s discerning diners for more than a decade. There is a smattering of North African flavours for good measure – find dishes such as grouper with harissa and mint yoghurt – the mainstay is classic French cuisine, from a crispy Nicoise salad and a wonderfully thick and sticky onion soup au gratin. 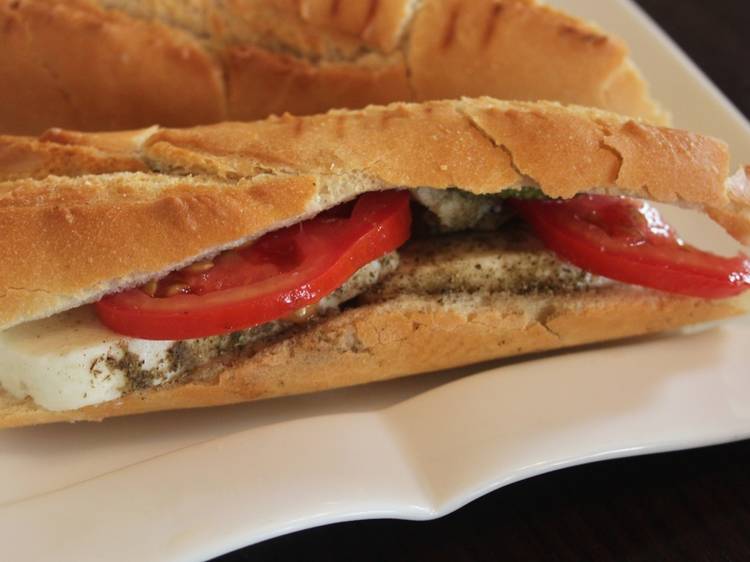 Iced cupcakes, golden pastries, crunchy baguettes and bulging paninis are the staple at this very European of cafés. From the humble sausage roll to a light and salty spinach and ricotta puff pastry, find a bevy of bakery favourites chalked up on giant blackboards behind the serving counter. DeliFrance’s piled-high trays of treats can certainly lay claim to being the real deal – they’ve all been prepared and frozen in France and shipped over for baking in Accra. Baguette fillings include into the likes of a bresaola, parmesan and olive oil baguette in this air-con-fresh pocket of calm. 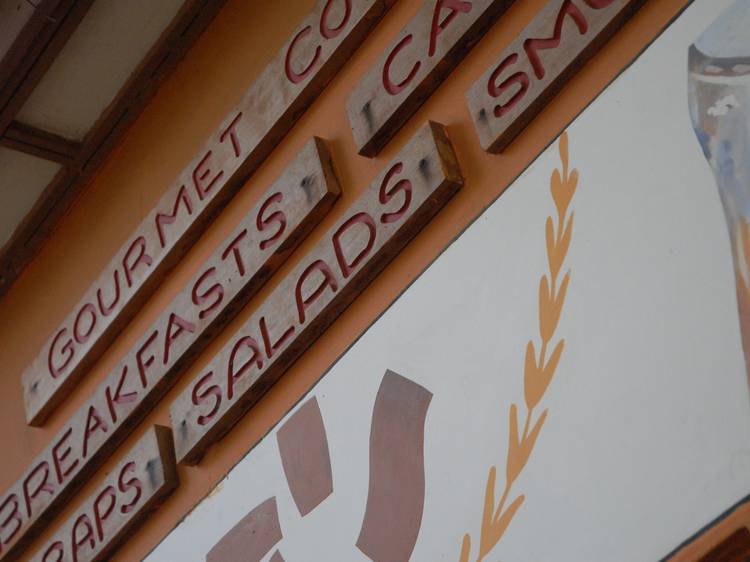 This café serves light lunches and brunches. Sandwiches are popular, especially the calorific chicken, cheese, bacon and avocado version. Apart from sandwiches, the menu contains rice and chicken dishes, lots of salads, burgers and a breakfast menu. The all-natural fruit smoothies are also popular, and the salads make it a favourite for those that prefer a healthy approach to their lunch. 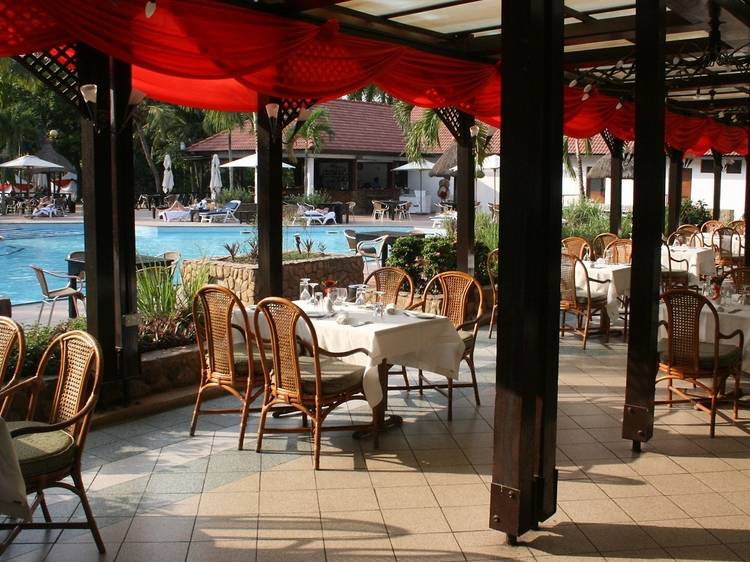 Branche, at the Golden Tulip hotel, is the kind of chic, understated hotel restaurant (or bar, lounge, call it what you will) that wouldn’t feel out of place in any global five-star property. There’s a full choice of Ghanaian dishes, as well as a large international buffet, and from 6pm the à la carte selection includes the likes of French onion soup, beef tenderloin and Atlantic lobster. There are also regular themed nights, such as Texas BBQ on Saturdays. Food can also be taken around the pleasant pool outside. It’s reasonably priced for a hotel restaurant with burgers aroundGH¢25and pasta around GH¢30. 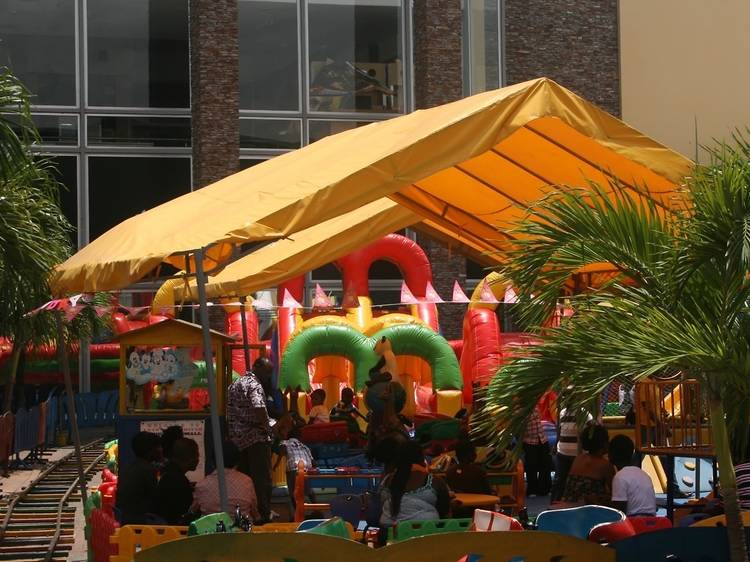 Clothing boutiques, global sports brands and high-end furniture outlets populate the ground floor of Ghana’s largest shopping mall. Glamourous African-inspired fashions fill the racks of Kiki Clothing and Jil Boutique, and a branch of African fabric specialists Woodin and Vlisco have a good range of prints. Also on the ground floor find familiar brands such as Levis, Puma and Swatch. A small food court includes fried chicken outlet Barcelo’s and upmarket bar and restaurant Rhapsody’s, and kids can let off steam in a central play area with a bouncy castle. Upstairs is the territory of Silverbird, which runs a well-stocked book and music store, Ghana’s only multiplex cinema showing current blockbusters, Nollywood and Ghanaian films, and now a new bar Silver Lounge. 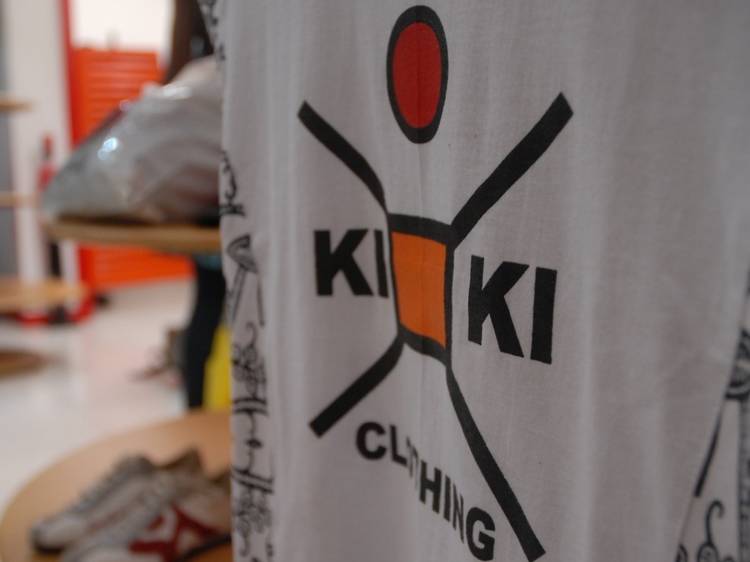 Run by the delightful Titi Ademola, this boutique sells dresses, traditional kaftans, bags and shoes. She has demonstrated her prowess on the international stage with bold yet wearable designs that sculpt traditional African designs into confident contemporary styles. She takes much of her inspiration from the amazing array of fabrics available in Makola Market. There is a good selection of children’s clothes too, with colourful batik designs. Kiki branded T-shirts are good quality and go beyond a simple logo on the chest, but it is her own designs that you come for. 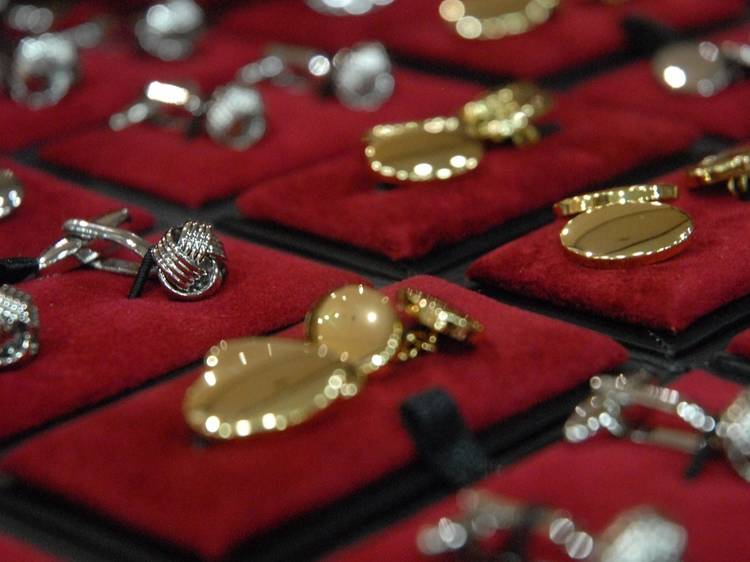 Smart clothes for smart guys, the London-based brand TM Lewin is a stylish men’s fashion shop along the lines of Gap with well-designed off-the-shelf suits and accessories such as cufflinks and colourful retro ties, to more casual polo shirts.

Woolworth’s is Ghana’s answer to Marks and Spencer. The South African-owned store focuses on quality clothes (including a good children’s section) and homewares. This is the place to pick up last minute slacks and a shirt for golf or a reasonably priced suit and shoes. The main attraction, however, is the selection of international foods and wines, including good muesli, frozen foods, teas and hard-to-find soya and rice milk. 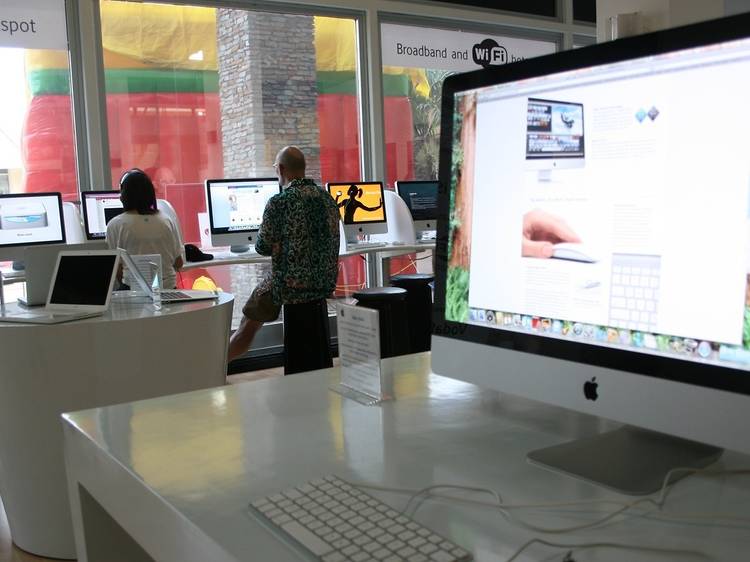 Ghana’s only Apple store has a ‘café’ and terminals offering broadband access (GH¢ 1.25 for 30 minutes). The store also runs a repair service.