Today, Boston enjoys a modern and robust theater scene, complete with rehabbed venues such as the jewel box Opera House and the glorious Paramount. From Washington Street and up and down Tremont Street, and even over in Harvard Square, every kind of theatrical performance—from classic to experimental—is offered up to locals in vibrant productions. Newcomers are surprised to learn how Boston’s Theatre District has a survival story worthy of a stage play; its proximity to the Combat Zone—the mid-20th century, city-sanctioned red light district—turned many theaters into X-rated venues and strip clubs, which littered surrounding streets with prostitutes and drug dealers. Of course, it’s wise to pair a show with a meal at one of the best restaurants in Boston, a sweet treat at one of the best dessert spots in Boston, or a drink at one of the best bars in Boston. 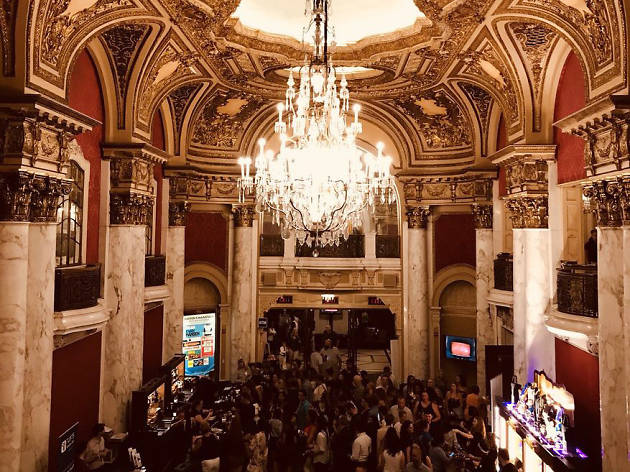 Small and splendid, this rococo 1928 building near the heart of Downtown Crossing has an elegance that belies a checkered past. It fell into horrendous disrepair, but with the help of Senator Edward Kennedy, was renovated and reopened in 2004 with its baroque décor of fairytale white terra cotta, gilded moldings, and crystal chandeliers gleaming anew. The Opera House is the Boston Ballet’s home venue and also features top Broadway musicals, as well as big name musical artists. On a practical note, the lobby has a bar, as does the basement lounge. 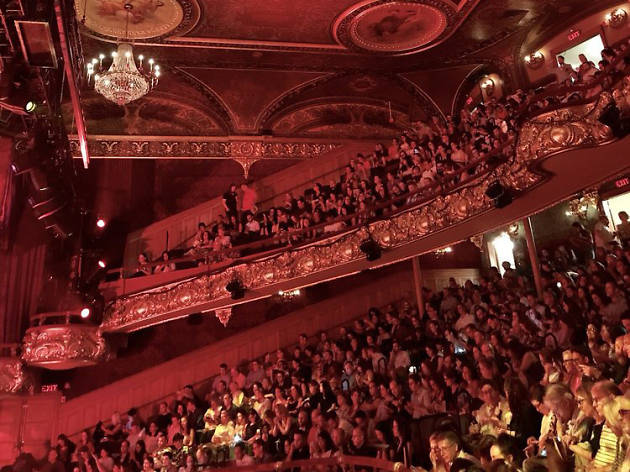 The ornate 1,700-seat Colonial Theatre (built in 1900) is now owned by Emerson College, but it holds the title as the oldest continually operating theatre in America—except for its renovation closures, that is. The hand-painted murals in the lobby, mosaic flooring, and gold leaf covered moldings are highly impressive. But the Colonial Theatre’s considerable cachet was built from its reputation for pre-Broadway premieres of musicals that became icons in the industry. The theater still has significant premieres, and it also hosts all kinds of productions, both classic and contemporary. 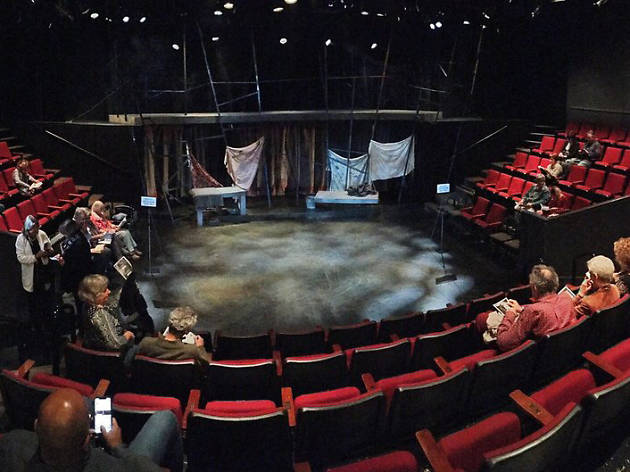 The Lyric Stage on Clarendon Street is tucked into Hotel 140, formerly a YWCA, a block from Copley Square. This small, 240-capacity theater’s stage has seating on three sides; it’s an intimate setting allowing the audience to be immersed in a performance, many of which are musicals. The Lyric Stage Company, which was founded in 1974, is Boston’s oldest theater company and now shares the space with City Stage Company, broadening the scope of the performances (most of which feature an inclusive cast of local artists). The hotel’s second floor café doubles as a theater lounge; there’s a bar and plenty of seating for relaxing before a performance or during intermission. 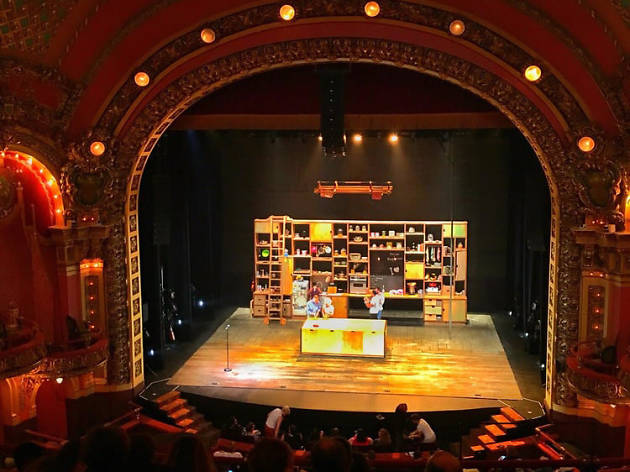 Now part of Emerson College’s campus, this 1,200-seat Beaux Arts theater is the second oldest in the Theatre District, and quite the gilded age grand dame. Built in 1903, it was originally designed for opera performances, and the opulent decor echoed the grandeur of European opera houses. Yet, theatrical roots are honored via Greek revival columns and traditional depictions of theater masks decorating the interior. The noble arched windows’ stained glass creates a colorful façade often missed by street level pedestrians. Opera, dance, and theater productions—both classic and progressive—pack the Cutler Majestic schedule. But, like much of the theater district, the Cutler Majestic was tossed around with various entertainment: from vaudeville to cinema, and altered to fit. Emerson’s intervention in the early 1980s and its subsequent renovations have preserved and revived this architectural and artistic gem, which is a member of the national League of Historic American Theatres and a Boston Historic Landmark. 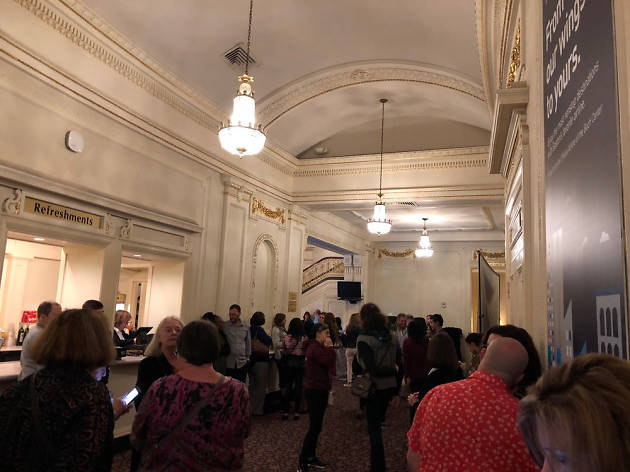 The 1,500-seat  Shubert dates back to 1910 and the birth of Boston’s Theatre District as an arts center. The theater has an elegant cream neo-classical façade, which has been wonderfully maintained through several renovations. Because of its architectural significance, the theater was placed on the National Register of Historic Places in 1980, which has kept the ornate lobby and marble entrance area to its original design. Along with classic and modern theater, and musicals, the Shubert also hosts concerts by musical artists of all ilk, and also some comedy shows. 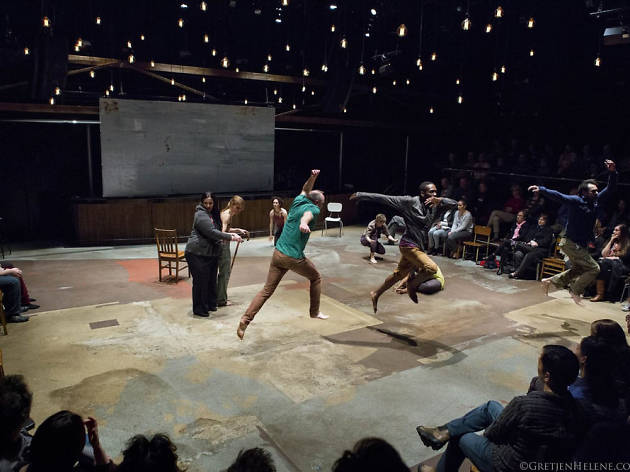 Located in Harvard Square, Harvard University’s Loeb Drama Center is the home of the American Repertory Theater, better known as A.R.T. While it’s a classroom extension for the students, it’s a theater like any other, with regular performances, mostly with a focus on modern, new, and experimental works. In addition to the 500-seat main theater, there is a small black box theater at the Loeb, and A.R.T. has a satellite theater, Oberon, on Arrow Street. (The club-like room is used as both an incubator for emerging playwrights and artists, as well as an immersive theater for innovative performances.) 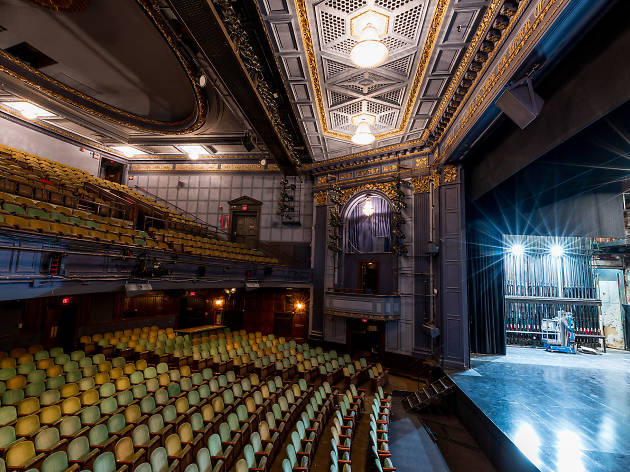 Having transformed from a theater into an art-house cinema, and back into a theater once again, this venue is home to the Huntington Theatre Company, an accomplished, ambitious troupe that brings big names to the little city. Consistently top-notch, Huntington productions often go on to Broadway glory, and have won a clutch of Elliot Norton Awards in recent years. Tell your friends you saw it here first. 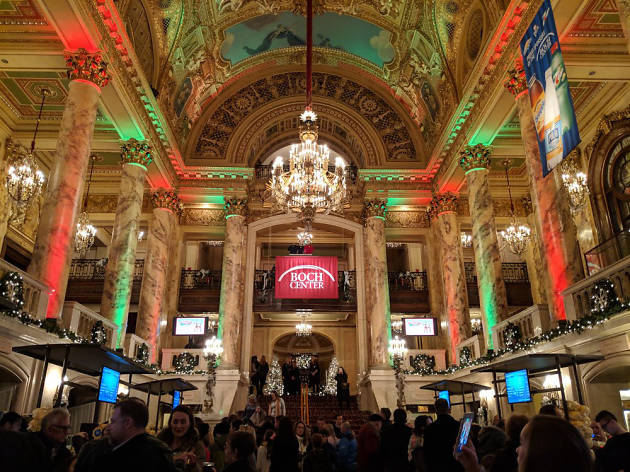 The Wang Theater is Tremont Street’s big kahuna, seating around 3,700 in what is the largest, and grandest, performance space in the Theatre District. The building dates back to 1925, when it opened as the Metropolitan Theatre; by the 1960s it was the home of the Boston Ballet, as well as a notable venue for opera. By the early 1980s, it had fallen by the wayside and became the Wang, named for its benefactor Dr. An Wang, who saved the ailing building from further decline. The renovations have returned the theater’s grandeur: gold-plated pendant chandeliers hang from the towering ceiling, which seems held up by beautiful, massive marbled pillars. Among many murals and friezes, the sky blue ceiling is dotted with clouds and heavenly bodies. The Wang is now part of the Boch Center and hosts theater, comedy, and musical performances. 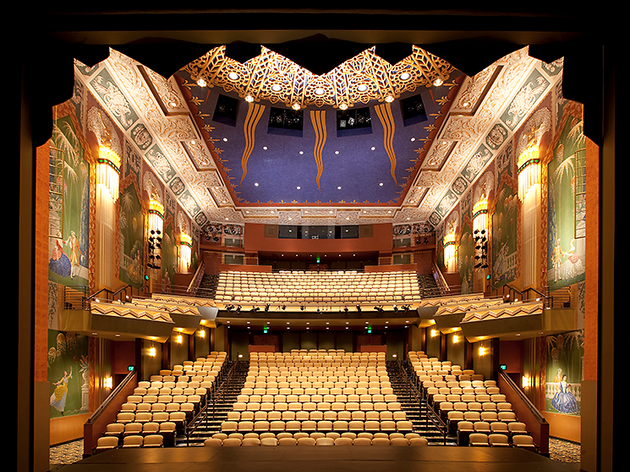 Who doesn’t love the brilliant amber and red lights of the Paramount’s marquee? It puts a glow on Washington Street that was long lost to urban decay until the Paramount Theatre reopened in 2010, signaling the official revitalization of Downtown Crossing. But it took a $92 million renovation project to restore the theater to its Art Deco glory. It originally opened in 1932 as a movie theater, owned by Paramount Pictures, and was an immediate success as the talkies were taking off. Now owned by Emerson College, the Paramount boasts a 596-seat main theater, a small black box theater that seats up to 150, and a 170-seat film screening room. The Paramount has hosted many new, groundbreaking theatrical works and regularly books US premieres. 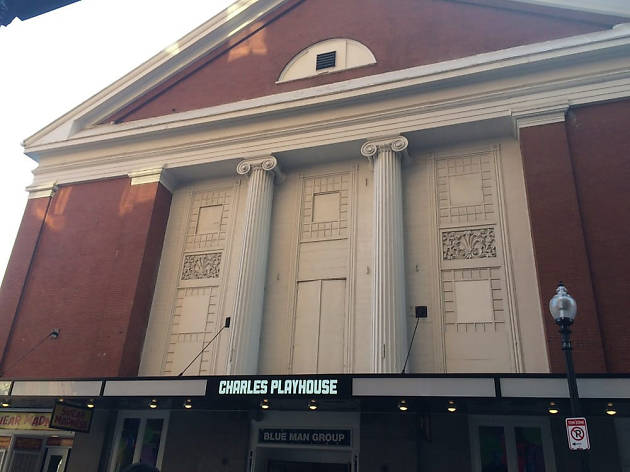 The Charles Playhouse is housed in a Greek revival building that actually dates to 1839, when it opened as a church and then became a synagogue. Things switched up a bit from there as it was turned into a speakeasy and then a top jazz venue where the likes of Count Basie and Duke Ellington held court. In the 1950s it became a theater proper, holding many notable productions. It has long been known as the home of the Blue Man Group, which, some three decades after its launch, shows no sign of stopping its performances in the main 500-seat theater. The 200-seat second stage is where the long-running Shear Madness shows have been playing for around the same lengthy tenure. 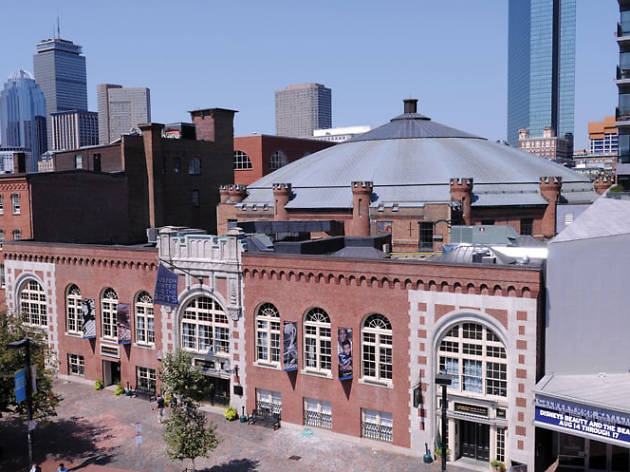 This multi-format venue, known by some as the BCA, is home to several resident Boston theater groups and a number of other performing artists. The Calderwood Pavilion—the host site of the Boston Theatre Marathon, held every May—is part of a hive of spaces, totaling four small to mid-sized theaters, and two micro spaces known as the BCA Plaza Theaters. The BCA is an important community theater and incubator, providing a venue for Boston’s budding playwrights and theatrical talent. 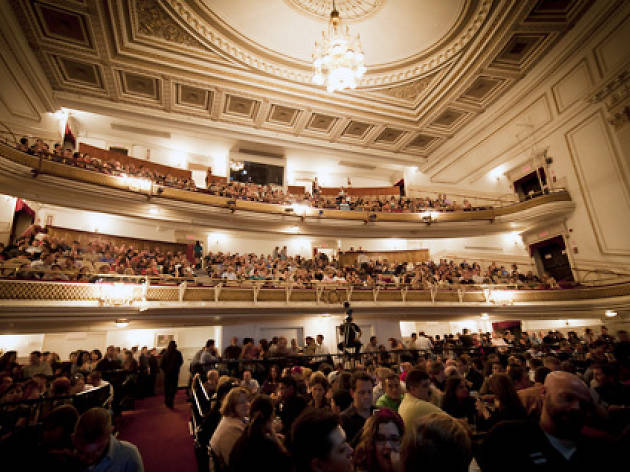 The Wilbur was built in 1914 in a Federal Revival style. It might seem plain compared to its more fantastically conceived Theatre District neighbors, but rather than a faux European showcase, its architecture replicates a Beacon Hill mansion, honoring Boston’s own significance as an artistic center. Though the Wilbur mostly showcases national comedy and popular music acts these days, and no longer counts as numero uno for splashy theatrical productions, it is a major, much cherished entertainment venue for the city.