Toast to the year's best bars, which include a culinary-focused brewpub and a British-Indian bar

The year 2015 will go down as an epic one for cocktail bars, but the craft beer scene gained some major new spots as well. Plus, some of these spots (and some of the best restaurants of 2015) feature sommeliers raising our city's wine profile. The openings came fast and furious this year—Lost Lake and the Drifter debuted in early January, and we didn't even hit two great newcomers, Band of Bohemia and Queen Mary, until mid-December. And let's pour one out for Wicker Park's Bom Bolla—the cava bar would have made the list, if not for ownership announcing that it will be closing December 23. Here's to an epic year of drinking. 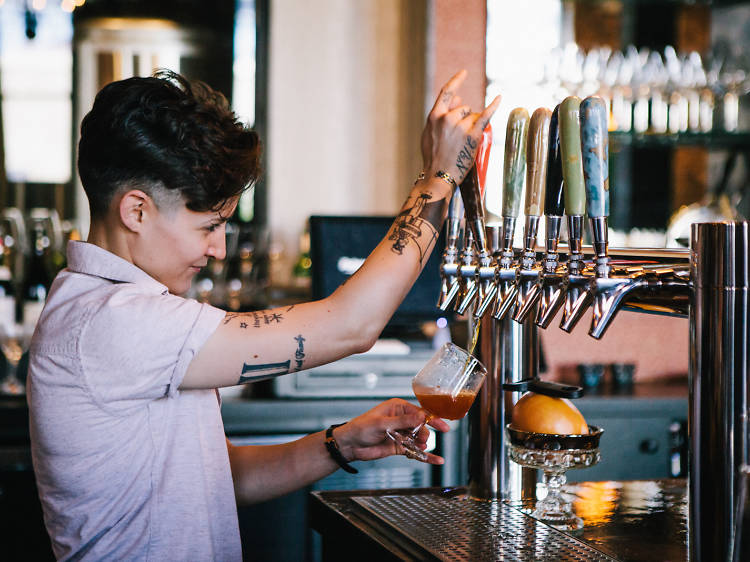 The brewpub, which makes culinary-focused beers, will challenge your expectations of what a brewpub can be. Grilled apple-tarragon beer? Bison tartare sprinkled with cured egg yolk? A potato cake with romesco sauce and tapenade, a.k.a. the best vegetarian entree we've had all year? Welcome to Band of Bohemia, which was founded by two Alinea vets and features Matt DuBois (EL Ideas, Inovasi) and Kevin McMullen (The Brixton) in the kitchen. The brewpub also has a chef's counter, a serious coffee and tea program (they're open during the day), and the sense that these guys are just getting started—we can't want to see where they go.
Read more
Order delivery 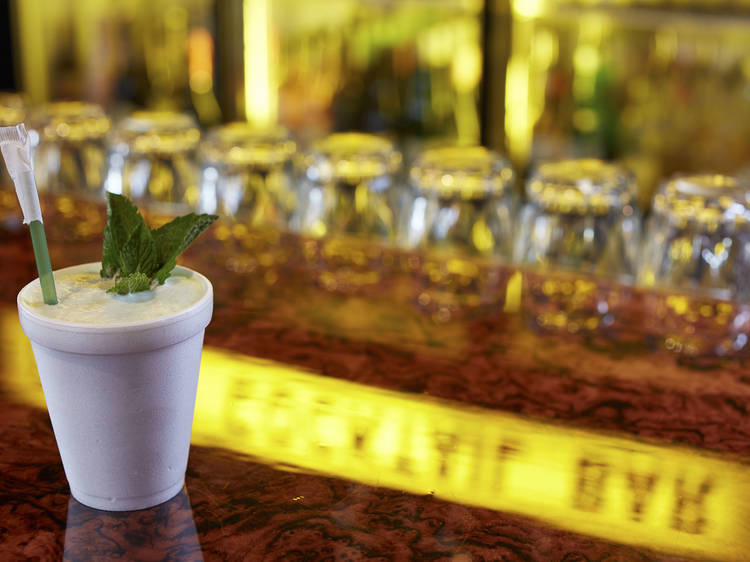 Brothers Chris and Calvin Marty bought the old Marble Bar and reopened it as Best Intentions this year. The dive bar charm remains, although the bar is a little sleeker and the drinks are much better. Settle into a table on the big back patio, or sidle up to the bar for minty Wondermint Malted shakes, shots of Angostura bitters (they're the only bar anywhere with the bitters on draft) and a list of well-made classics.
Read more
Order delivery
Advertising 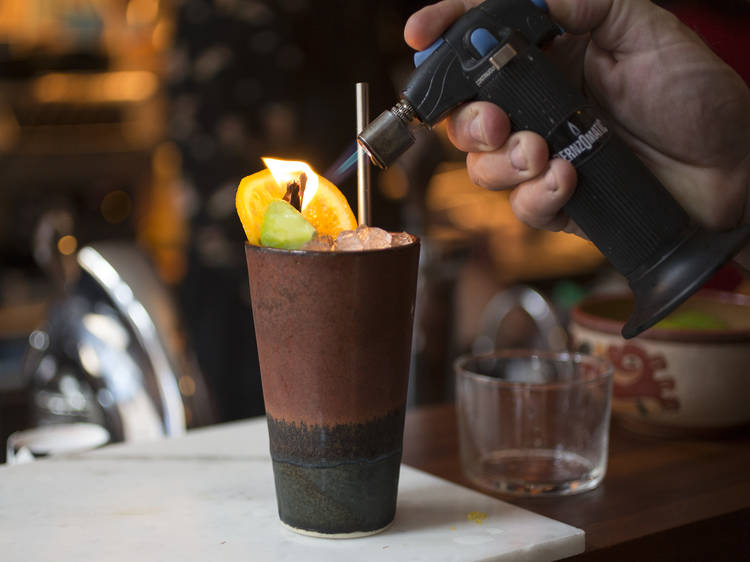 The Chicago outpost of Gabe Orta and Elad Zvi’s much-lauded Miami cocktail bar is located in the Freehand Hotel and serves some of the city's most interesting cocktails. Try a Garrett's Popcorn–inspired old-fashioned, Chicago-style hot dog margarita or more straightforward drinks, like a sherry cobbler on draft. The bar is tiny, but seats are also available by the fireplace in the lobby, and it's a cozy spot to spend the colder months.
Read more 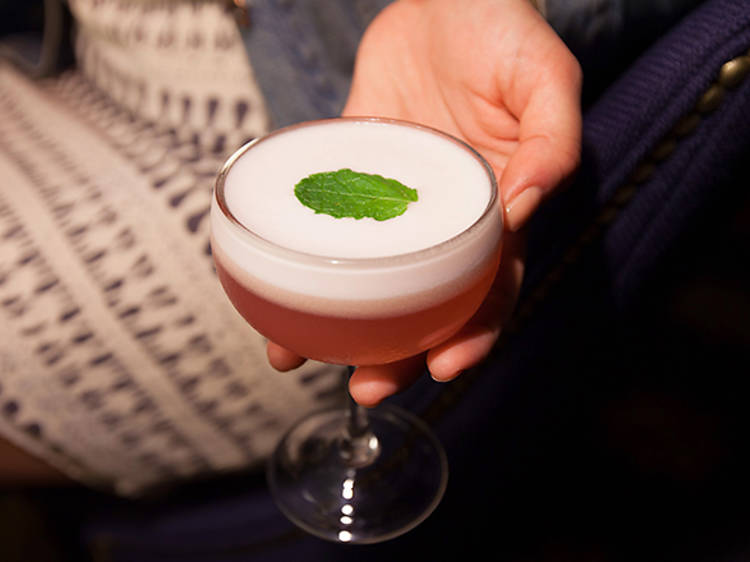 Easily the most exciting place to drink this year was the Chicago Athletic Association, which has five bars. For luxury, it's the eight-seat Milk Room, which focuses on rare and vintage spirits. For elegant drinks and dinner, Cherry Circle Room. For low-key relaxing, the Drawing Room. For games and more affordable drinks, Game Room. And for city views, Cindy's. While they each appeal to a different crowd, for serious fans of wine or cocktails, we love Cherry Circle Room, thanks to wines from sommelier Andrew Algren (Alinea) and cocktails from Paul McGee (Lost Lake).
Read more
Check prices
Advertising 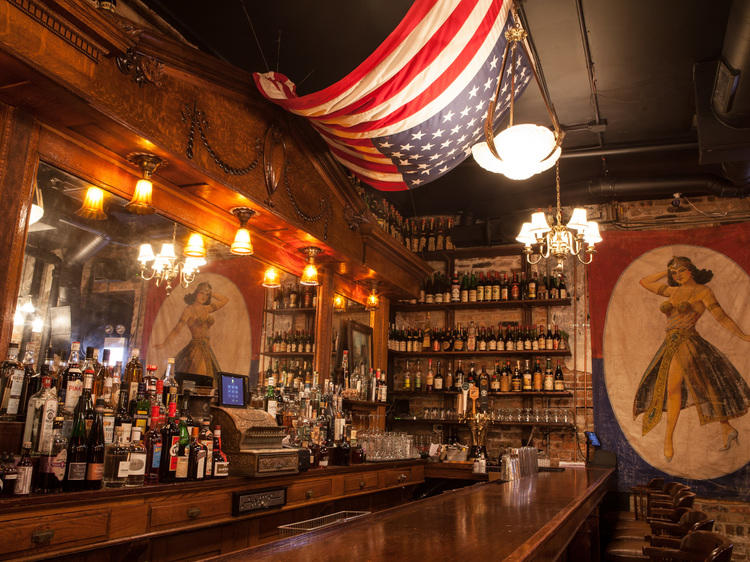 The Drifter isn't the only former speakeasy on this list (Milk Room was also one), but it's the only one that feels like it hasn't changed much in the ensuing decades. It's hidden beneath Green Door Tavern; much of the old decor remains, like a painting of FDR and a bullet-riddled Mobil sign and each night offers entertainment, like a contortionist. But we're willing to bet the drinks are a lot better than in the Prohibition days, thanks to Liz Pearce, who devises great cocktails and prints them on a tarot card menu that changes daily. You won't go wrong here, but if you spy the Red Rum, get it.
Read more 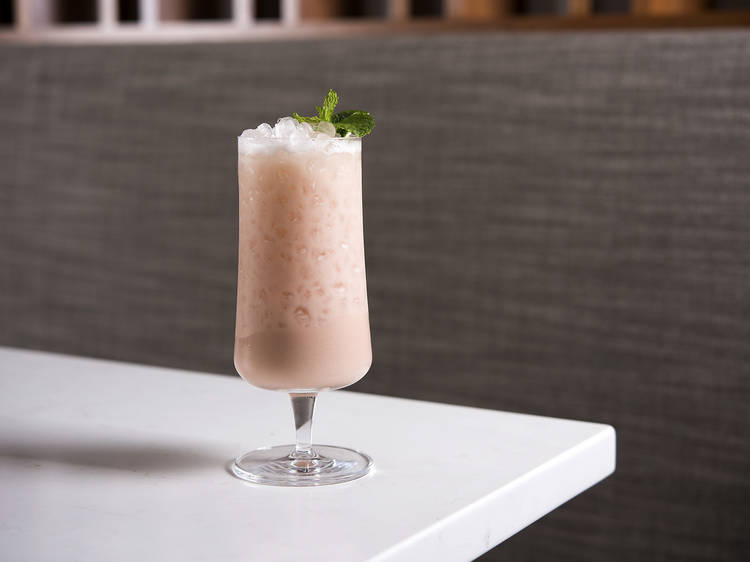 When restaurateur Danny Meyer and New York’s Dead Rabbit Grocery & Grog team up to open a cocktail bar, it's a big deal. Even bigger: when that bar is on a rooftop in Chicago and Julia Momose (Aviary and Office) is making the drinks. Named for historical Chicago figures, the drinks incorporate unexpected ingredients, like herbal Old Bay tincture in the mezcal-based Diamond Jim. Food from Aaron Lirette rounds out the experience, and the uni spaghetti is a must-order.
Read more
Advertising 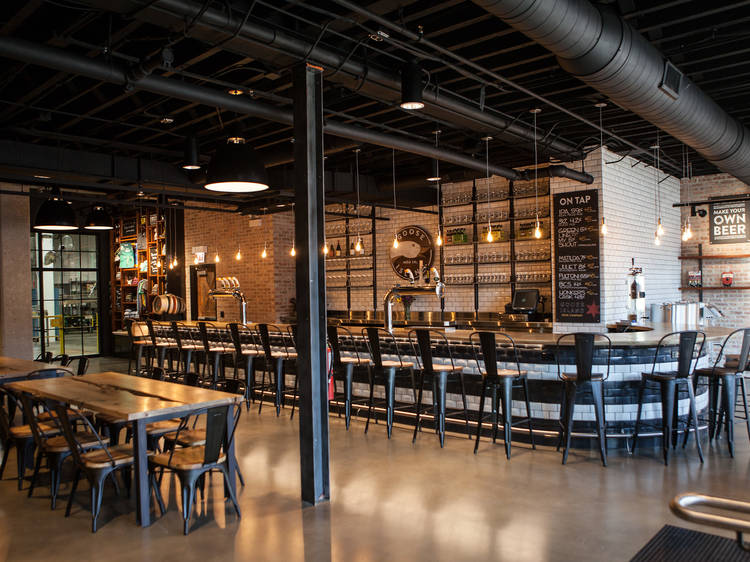 This spring, Goose Island opened its revamped Fulton Street taproom, and it's a beauty. Tours are available and take you through the brewing facilities, wild fermentation room and barrel aging warehouse, but if you're not up for the 45-minute tour, grab a seat in the 80-seat taproom. The regularly changing beer list includes eight beers on draft, plus a cask, and while you'll find classics like IPA, you likely want to go for the taproom exclusives. A recent list offered sour Caution Tape, Festivity brown ale and a Bourbon County Stout variant. If you can't try everything, growlers are available to go.
Read more 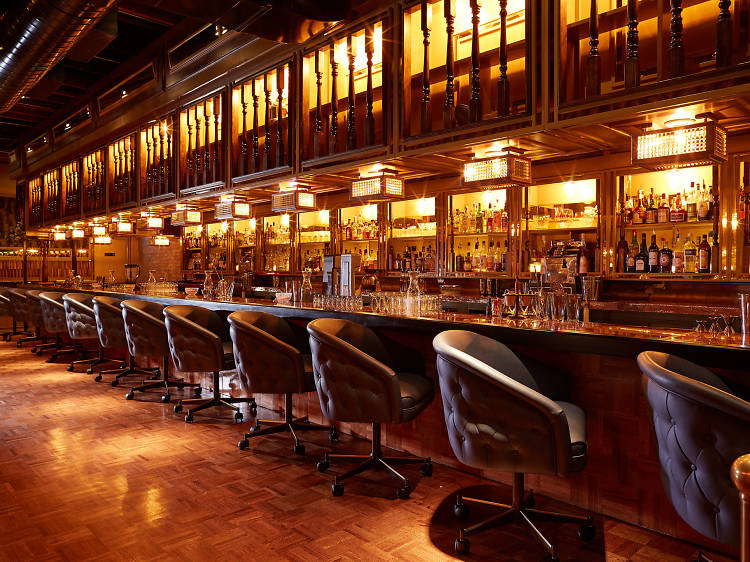 We weren't around to bar hop through the '70s, but we're pretty sure the drinks were not quite as good as Heavy Feather bartender Doug Phillips (Scofflaw) makes them seem. At the sleek fern bar, Phillips brings back cocktails from the era and greatly improves upon them. A brand new cocktail list just launched, with a Tom & Jerry, Brandy Alexander and Mudslide ice cream drink, and we can't wait to explore the new options.
Read more
Advertising 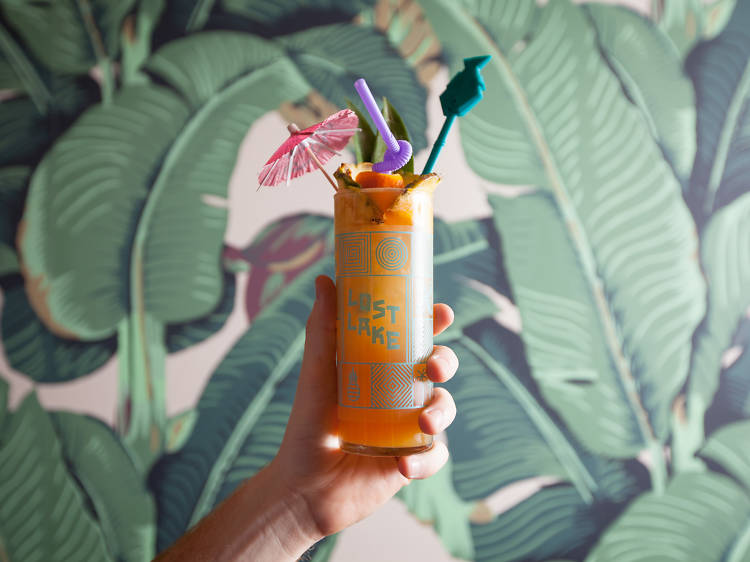 Tiki shows no signs of stopping, and when the drinks are as good as at Lost Lake, that's fine by us. The Logan Square tiki bar opened in January when Paul McGee left Three Dots and a Dash to join up with Land and Sea Dept. The result was this cool spot, a little more relaxed than Three Dots, with more interesting drinks. Case in point: all the rhum agricole in the cocktails on the current list.
Read more
Order delivery 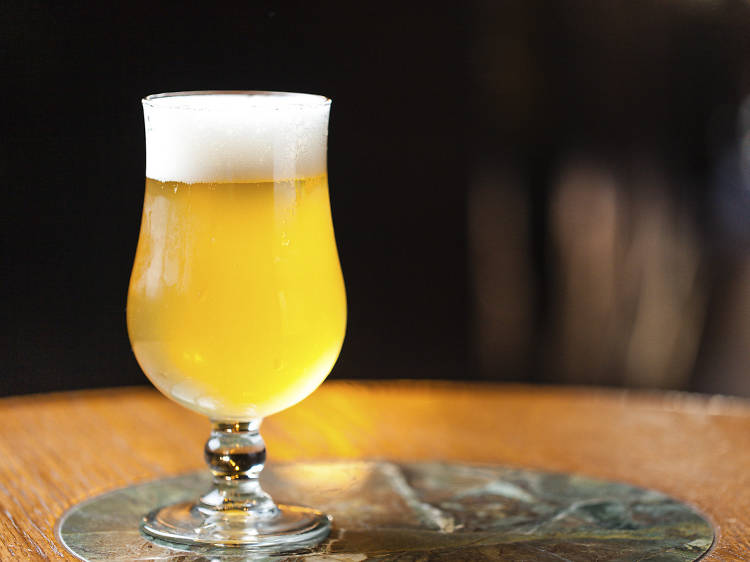 The problem with Pub Royale is that there's so much terrific stuff—a daily changing beer and cider list from beverage director Michael McAvena, six takes on a Pimm's Cup (including a new Besk version), a frozen mango lassi and tons of great food from Jason Vaughn, including spicy-sweet gobi Manchurian and butter paneer—you want to go daily so you can try it all.
Read more
Order delivery
Advertising 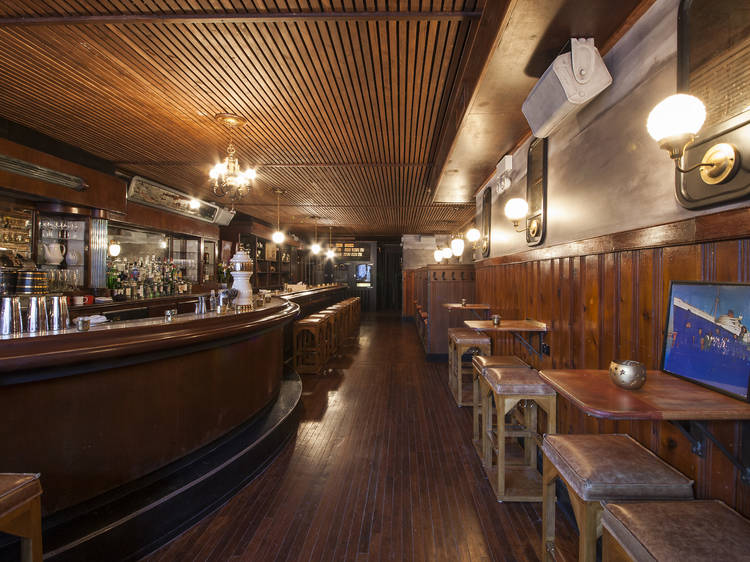 Drink like a sailor at Queen Mary Tavern, the latest spot from Heisler Hospitality, which marries two of the group's bars: the low-key feel of Sportsman's Club with the serious drink program of Pub Royale. Run by Dan Smith and Mony Bunni, Queen Mary focuses on maritime drinking traditions, so expect mostly gin, rum and Scotch. And expect the cocktails to be strong—Albatross combines gin and madeira with Angostura and coriander for an herbal sip, while St. Erasmus is a tall, icy swizzle with overproof rum and some heat from chili. The short beer list features two Aquanaut beers on tap and a Coors Banquet Beer. Soon, a tiny kitchen in back will serve snacks.
Read more
Order delivery 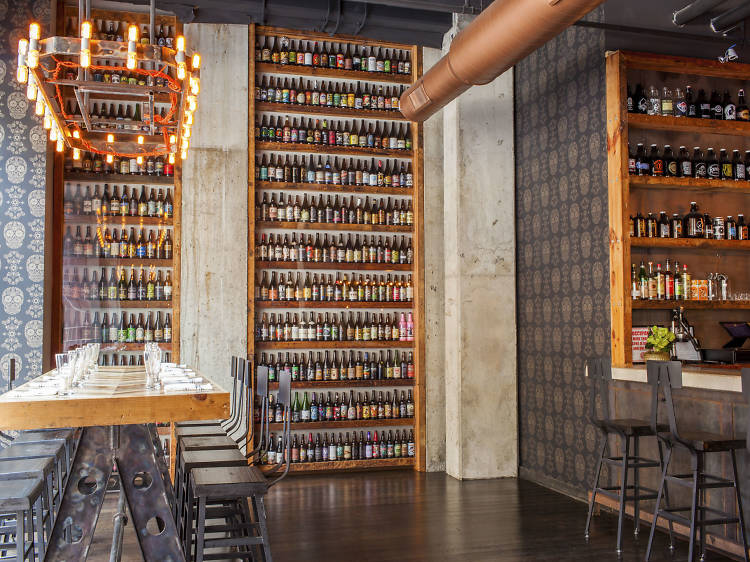 Beer nerds wanting a taste of brews from places like Norway and Spain that they can’t easily find elsewhere in Chicago should head to Villains, which reopened in the South Loop after being closed for a few years. The beer list is changing constantly, so it's worth making regular trips to see what's available. Bonus: Food from Dennis Stover, like perfectly cooked pork belly with sweet potatoes, makes it easier to try a couple beers in one session.